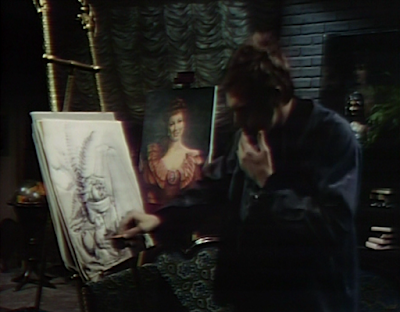 Tate sketches some fruit he has laid out on a table. He decides to add a vase to his drawing, and starts sketching it. He looks up and sees the vase on the table.He picks up the vase and examines it. He looks at the portrait of Amanda, and puts 2+2 together. There's a knock at the door and he tells them to go away. Petofi lets himself in. Tate tells him that he's busy. Tate says he has rights, and Petofi reminds him that he has very few. Petofi asks what cause his ill temper, and Tate tells him nothing. Petofi compliments the vase. He tells Tate that he plans to meet someone at the studio, and says that he sent them a message signed by Tate. 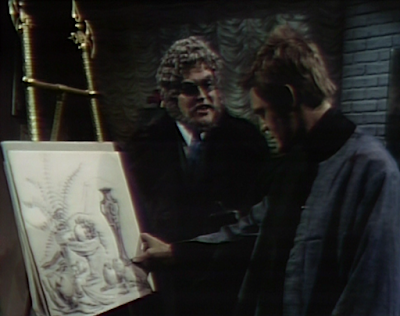 Magda sneaks Barnabas into Quentin's room. He notes that the moon is full, and asks where Quentin was when the change took place. She says he didn't change. Barnabas sends her to get him. She tells Barnabas that she knows Quentin will die on September 10th. She says Pansy Faye, possessing Charity, told her. She tells him he has six days. Barnabas asks how he dies, and she tells him Charity saw his body in the tower. Barnabas revisits the three things that must happen before Quentin dies, and says that they must stop Jamison from rejecting him. Barnabas says that he will have to find Quentin's I Ching wands. He tells her they must find out who killed Quentin by going to the present and speaking to Quentin's ghost. He searches for the wands. 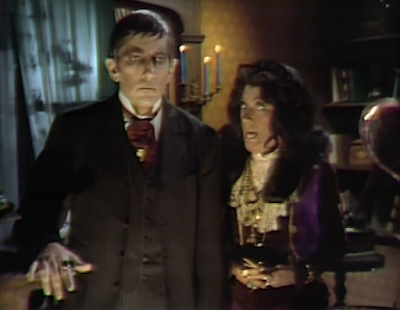 Tate admires the portrait of Amanda. Petofi asks him to put away the portrait before his visitor arrives. When there's a knock at the door, Tate puts the portrait facing the wall. He lets Edward in, who asks why he wished to see him. Petofi comes in and says he called on him. Edward says he has nothing to say to him. Petofi says they need to discuss Barnabas, and sends Tate away. Edward asks why he should believe Petofi after what he did to his family. Petofi denies placing a curse on the family. Edward says that Quentin told him, and Petofi asks if he believes everything Quentin says. Petofi says he thought the gypsies in Collinwood had his stolen property, so he used a fake name. He plays to Edward's ego, and offers to help him catch Barnabas. Edward asks why he thinks he is hunting Barnabas. Petofi says he knows Barnabas is the greatest danger to the Collins family, and asks if he should say more. 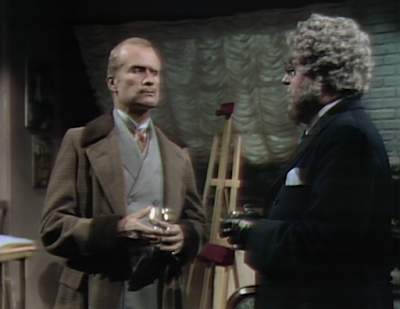 Barnabas tells Magda to check the closet for the wands. She tells him to bring the light. Inside the closet they find the portrait of the werewolf. They see it was painted by Tate. Barnabas tells her that the portrait changed into the wolf, and Quentin did not. Magda says it's impossible, and Barnabas says that Petofi is involved. He says that Petofi may be trying to win Quentin. 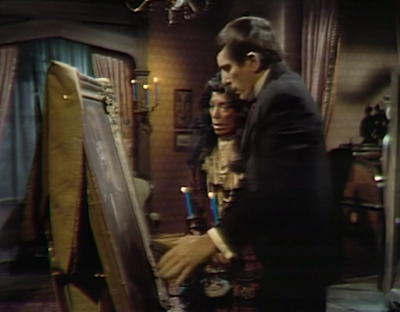 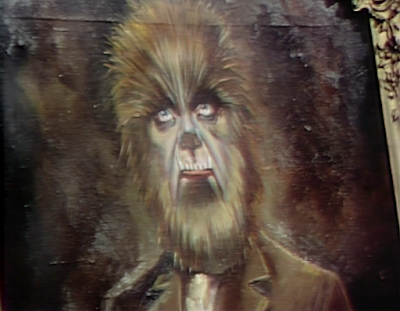 Barnabas says he needs to know if Petofi came because history changed when he traveled back in time. They continue searching for the wands. Barnabas closes the closet and then opens it again. He takes out the wands which were clearly on the top shelf. He tells Magda they will take him to the future. He says he must try from the old house. 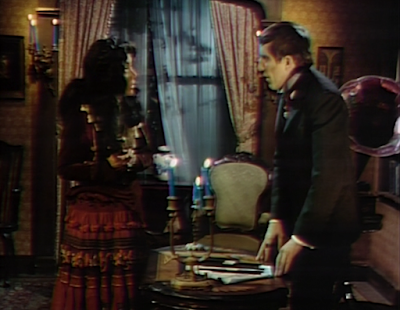 In the basement of the old house, Magda tells Barnabas she doesn't think it will work. He tells her that she must understand everything that is happening. He says his physical body will stay, but his astral body will go. He throws the wands on the table and places them in parallel. He tells her there are 64 combinations, and he drew the 49th. He says a door will appear, and he will go through it. He says that if he does not return before midnight on the 10th, she must go to Quentin and tell him to leave Collinwood without seeing Jamison. He must leave Collinwood without telling anyone where he is going, and must not return until after the 10th. Barnabas tells her to go and find Petofi, and prevent him from coming to the old house. 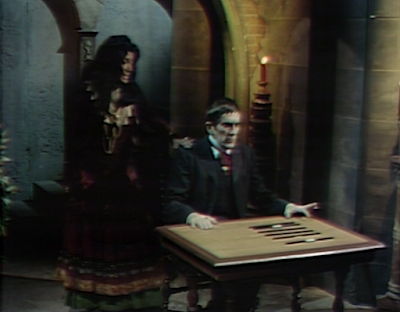 Edward tells Petofi he doesn't know what he means. Petofi says he knows Barnabas is a vampire. Edward realizes that Petofi could have gone to the police, so he can trust him. Petofi says Magda will know where to find him. Edward says he must do it alone, and deal with it privately. Edward says he must go to the old house. Petofi hands him six silver bullets. He reminds Edward that Barnabas cannot live without his coffin. He says he looks forward to hearing from Edward once he has taken care of Barnabas. 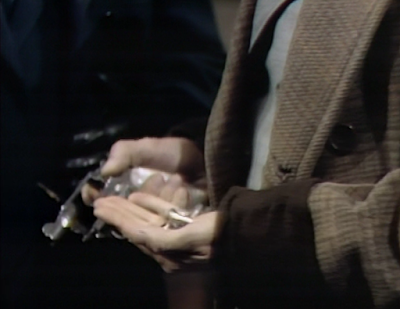 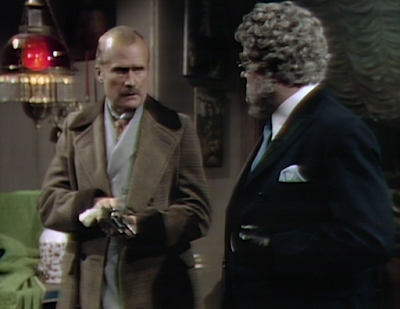 Barnabas focuses on the I Ching wands, which appear on a door. 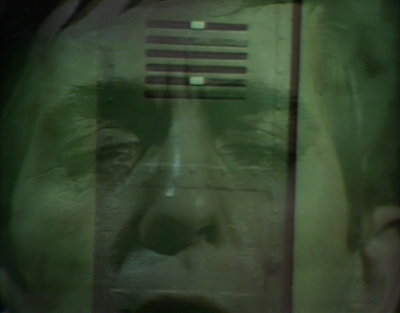 John: All of a sudden, Barnabas has figured out how to travel through time on demand! Petofi should be thrilled to hear the news.

Christine: I thought perhaps Barnabas' advice to Magda may have been meant for us all: "Now, if you don't understand, don't try."

John: If Magda waits until midnight on the 10th for Barnabas to return, I assume it will be too late for Quentin, as he'll already be dead. I hope she figures out that she should do that on the 9th, instead...

Christine: Midnight is considered the start of a new day, so I think he was correct to say midnight on the 10th, with that understanding, though she should probably warn him ahead of time anyway.

John: Ah, poor Edward. So interested in his social standing that he ignores Quentin's warning about Petofi. I can understand his not always believing Quentin, but if he gave it the slightest consideration,  he might have realized that Quentin had nothing to gain by lying about Petofi. And the fact that Petofi knows about Barnabas being a vampire doesn't raise any red flags? Maybe Edward will arrive in time to travel to 1969 with Barnabas!

Christine: It's more likely that he'll arrive and take Barnabas out while he's in a trance, which would be worthwhile if Petofi found out he prompted him to kill Barnabas just as he was attempting to travel back to the future. 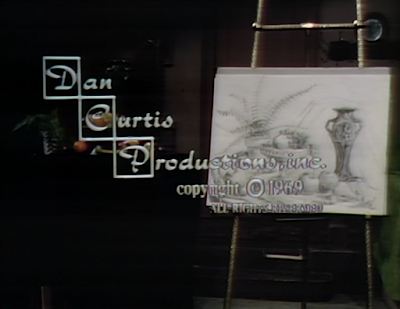