Edward arrives at the old house, looking for Barnabas and ready to kill him. 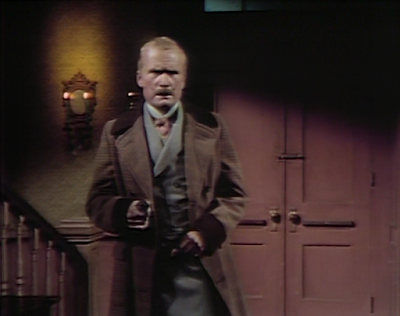 In the basement, Barnabas' astral form leaves his body sitting at a desk. 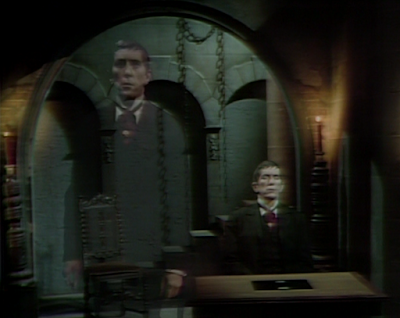 Edward makes his way downstairs and finds Barnabas in a trance. 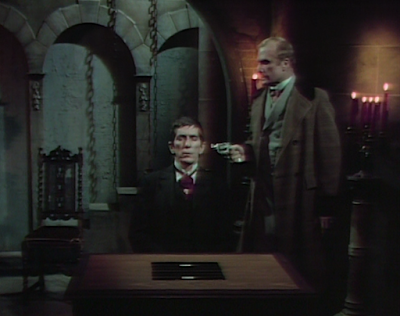 Astral Barnabas approaches a door with the I Ching wands, and it opens.

Edward swats away the I Ching wands.

In the old house in 1969, Julia and Stokes watch Barnabas struggle before disappearing before their eyes. Julia asks Stokes what happened to him. Stokes says they may never know, though they can assume Barnabas is dead. 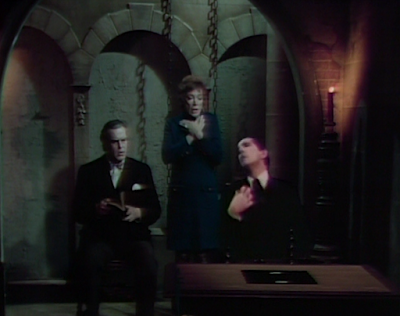 Barnabas lies on a cot before Edward. He gets up and asks what happened. Edward tells him he will practice no more supernatural hocus pocus. Barnabas realizes that the I Ching trance was interrupted. He tries to convince Edward that he's trying to save the future of the Collins family. Barnabas says Edward can't shoot him, because he carries the Collins name. Edward says killing him is his duty. Barnabas dares him to shoot him. Edward cannot. He says he will let nature take its course. He says he will leave Barnabas in his cell and allow the dawn to destroy him. Edward leaves him, and says that he will return just before dawn. He also tells Barnabas that all secret passageways have been blocked. 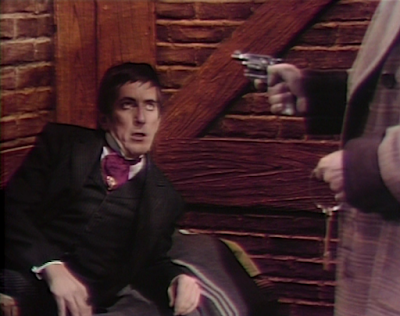 Barnabas thinks that when the house was restored in 1967, Willie took the desk in his cell up to the drawing room. He sits down to write a note to Julia explaining why his mission failed. He mentions that two of the three events prophesized have happened, and that he planned to return to the future to find out who would kill Quentin on September 10th. He takes the letter and hides it in a secret panel in the desk. 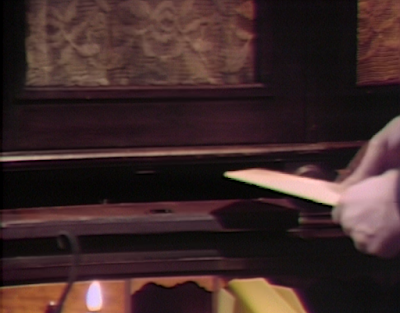 Amy is playing with a doll named Amanda when she searches the desk for a pin. She returns to the desk to look for a book, and inadvertently opens the secret panel. She finds a letter addressed to Dr. Julia Hoffman. 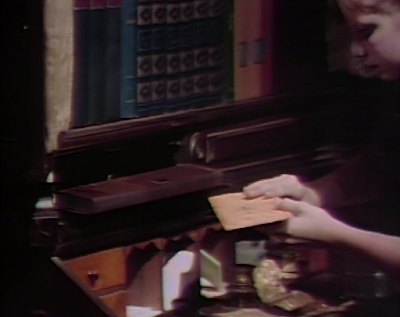 Stokes tells Julia it's pointless for her to sit in the chair where Barnabas disappeared. Stokes says they must tell the family that Barnabas is gone. She asks what will happen to David, and he says he doesn't know. She asks him to keep the wands as he left them. She goes upstairs, and Stokes says he will stay the night, and tell the family in the morning. 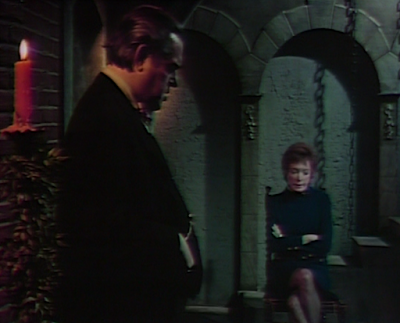 Amy has the letter in the drawing room, and is about to open it when Julia comes in. She hides it behind her back, and Julia asks her what she's hiding. Amy says she'll show it to her if she promises not to be angry. Amy hands it over, and Julia opens it. She freaks out, and asks where she found it. Amy says it was in a secret drawer in the desk. Julia storms out. 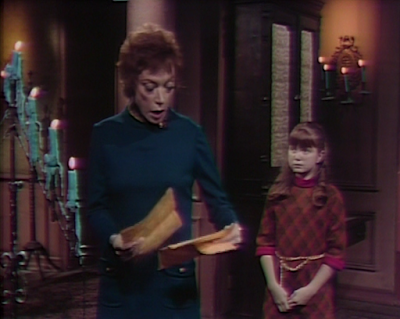 Stokes reads the letter from Barnabas. Stokes says he assumes Julia knows something about Barnabas that he doesn't know. Stokes recites the bit about Edward learning his secret, and asks Julia what it is. She says she doesn't know, and he says the letter takes it for granted that she does. Julia tries to make up a story, but Stokes doesn't buy it. 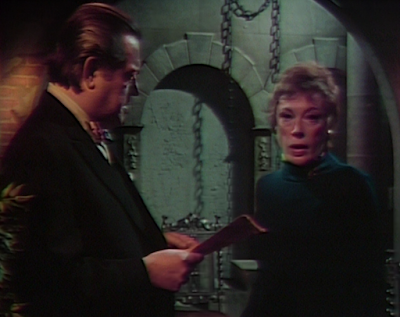 She says they should proceed with what they know. Julia says she's going to try and reach Quentin, and then go back in time to save Barnabas. She says Amy has seen Quentin, and Stokes asks if she's willing to jeopardize her life. She says she'll take the chance, and then use the I Ching 49th hexagram to go back in time. Stokes says he will study the I Ching so he can be of more help to her. 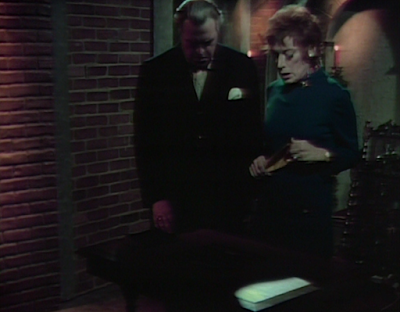 Julia asks Amy to come with her to Collinwood to speak to Quentin for David's sake. She agrees.

Julia and Amy arrive at Collinwood. She asks Amy where Quentin might be. Amy says it doesn't matter, and calls to him. The hear his music, and Amy screams that he's coming and runs out the front door. 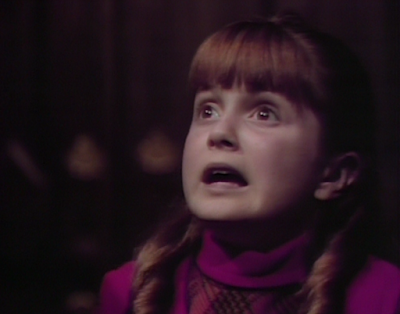 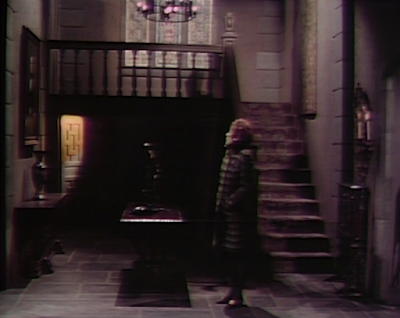 John: It was cool to finally have a little back and forth between 1897 and 1969. I'm surprised this hasn't really happened (save for a brief dream sequence) since we started this flashback.

Christine: I certainly have missed our present day characters and enjoyed checking back in on them today. Look how much Amy has grown while we've been in the past! It also made me hope for the possibility that Petofi could travel forward in time and meet Professor Stokes.

John: We'll forgive the writers for the deus ex machina in this episode. I thought it was great when Edward swatted away the I Ching wands, causing Barnabas to freak out in the past and future. That seemed like the most animated we've ever seen Jonathan Frid! 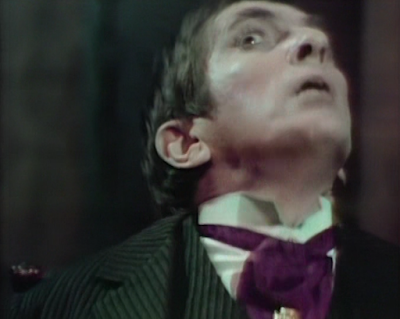 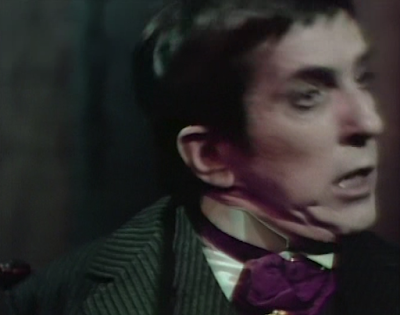 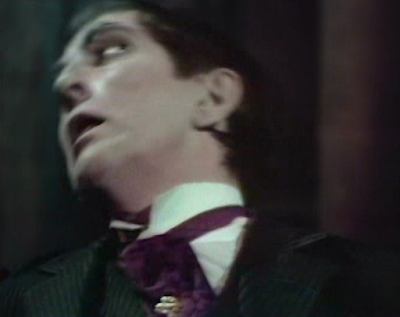 Christine: That was quite an impressive herky-jerky performance! I was getting whiplash just watching him.

John: I wondered how Julia would get the necessary info from Quentin, knowing he was off today, particularly when the 'Quentin phone wasn't on the desk in the foyer.

Christine: I couldn't help wondering if Quentin's ghost has changed as a result of knowing Barnabas.

Where did they get the idea that using I Ching could enable you to experience time travel? In reality, it's only a fortune-telling device.

This didn't stop the writers of the Amazon version of The Man in the High Castle from using the same method to travel to an alternate dimension (a.k.a, a "parallel time band," to use Dark Shadows terminology). Didn't they know that you use a sealed-off locked room for that?