Quentin arrives at the rectory, wondering if he can betray Barnabas. He thinks about leaving Collinwood. He hears a rustling in the woods and imagines himself as the werewolf. He screams, "No!" He decides he has no choice but to betray Barnabas. 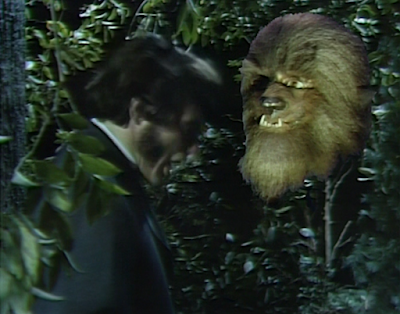 Julia comes to, and Barnabas asks her if she remembers him. He tells her to look at the letter she brought with her. He tells her she came back in time to help him. He begs her to try and remember. She brings up David, and he asks her to remember what she knows about David. 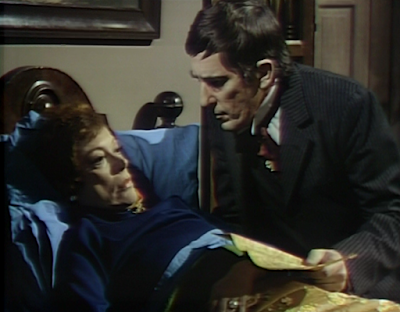 Quentin arrives, asking about Julia. He tells Barnabas that Beth tried to kill him. He adds that Petofi stopped her before she could. Barnabas asks if he feels grateful to Petofi, as he doesn't do anything without expecting something in return. Barnabas tells Quentin to come to him if Petofi makes any demands of him. Julia stirs, and Barnabas tells her that Quentin is alright. She cries, mentioning a black wreath on the door. Barnabas realizes that Julia is seeing the family in the future, trapped between her present and the past. Barnabas asks her what she sees. 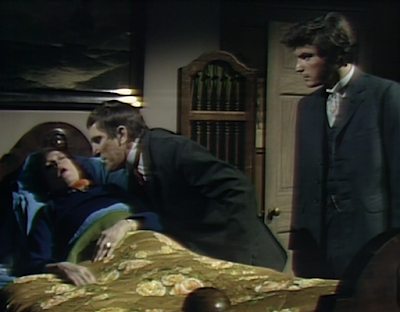 Julia describes a funeral wreath on the door. She sees Roger, crying as he comes in to view David's dead body. Roger tells David he knows that he did not want to go with Quentin, but his power was too strong. He wishes that David and Quentin will both find peace now. David sits up, telling Roger that Quentin and Beth have disappeared and are gone forever. 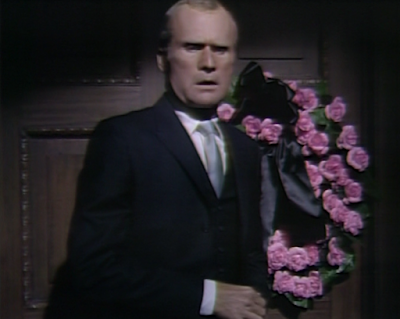 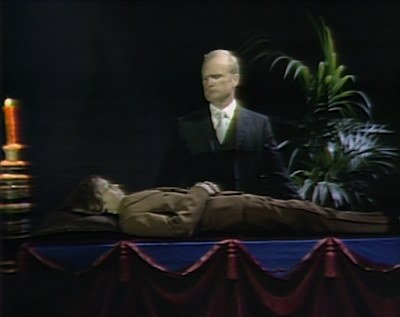 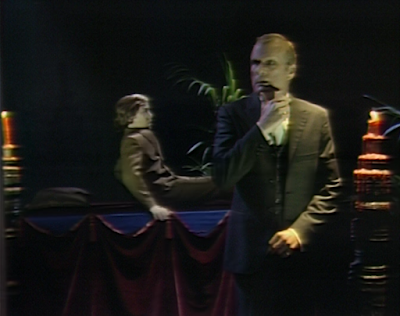 Julia sits up, telling them that David is alright. Quentin asks Barnabas what it means when she says that he is gone. Julia wakes and Barnabas says that Quentin is saved, and introduces him to her. She says he looks the same, with no evil in his face. Quentin asks how they can believe her, since no one can come back from death. Barnabas says that when Quentin did not die, he did not become a ghost. Quentin says he can't live from now until then, and Barnabas asks why not. He adds that even if he does die, he will no longer have the obsession with David. 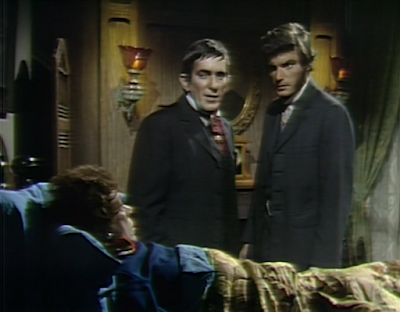 He asks Quentin if Jamison rejected him, and Quentin says that he did. Barnabas asks what he's going to do, and Quentin says he will make him change his mind. Barnabas says that if he had died last night, his relationship with Jamison would be unresolved, and beyond the grave he would not have rested. Seeing David would remind him of that unresolved relationship. Quentin realizes that he has a second chance. Quentin asks why Beth's ghost disappeared, and Julia says that after he died, she killed herself. Quentin says that David found a skeleton in his room, and asks whose bones those were if not his. Barnabas tells him that they can't answer all of his questions tonight. Barnabas asks Quentin not to tell anyone about what happened. 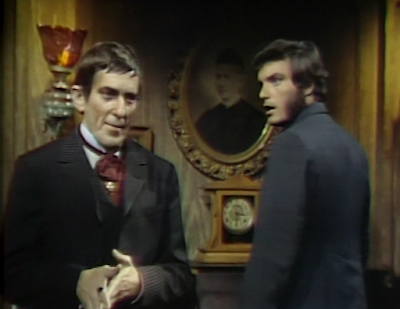 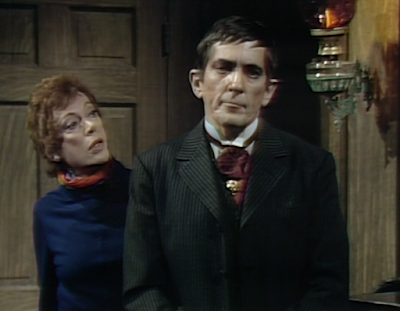 Julia tells Barnabas that when he left, his body remained there. He says he understands that. She tells him that the night before last, the night she found the letter, he disappeared. He realizes that was when Edward disrupted the I Ching wands. She wants to try to get back to the future together, and he says he cannot while Petofi is still there. 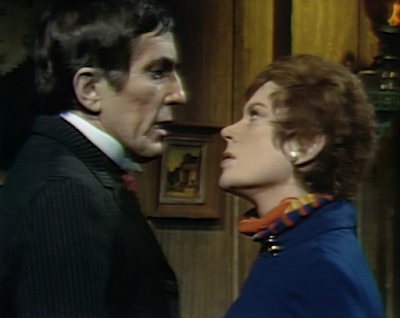 He tells her that she is going to stay in the past with him, and she needs to help him live in the daytime again. She says it's impossible. He gives her some period clothes, and tells her to go to Evan Hanley, introducing herself as a member of a coven. He says he will help her. 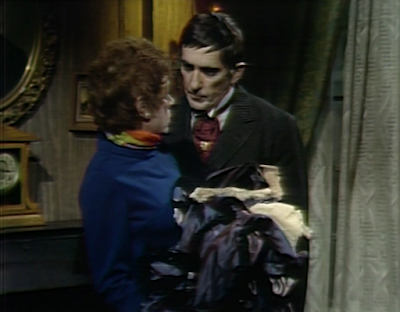 Quentin listens to his theme, drinking. Edward comes into his room and shuts it off. Quentin tells Edward that he has a conscience. He says that he did something that he shouldn't have done, and that's why he's drunk. 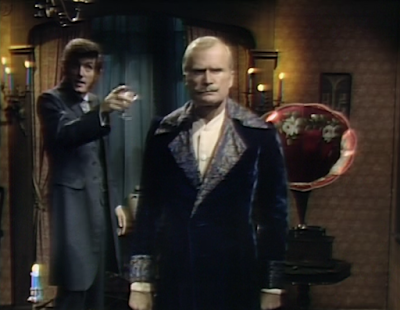 Julia says the tools at her disposal are primitive. She says Evan was helpful, but he must realize that the experiment may not work. He says he has to go to Quentin. She tells him she needs to give him another injection tonight. He says he'll be back. 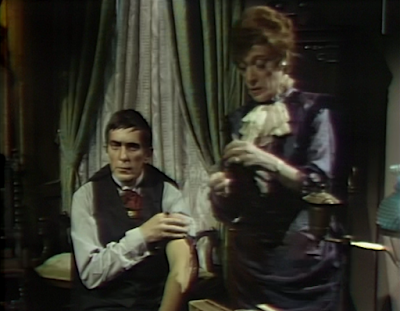 Quentin is staring at his portrait when Barnabas comes to see him. He tells Quentin that he saw the portrait changed to a wolf when the moon was full, but he did not. He asks if Quentin saw Petofi. Quentin says enemies don't provide explanations. Quentin says he's tired of secrets, and invites Barnabas to solve the mystery. 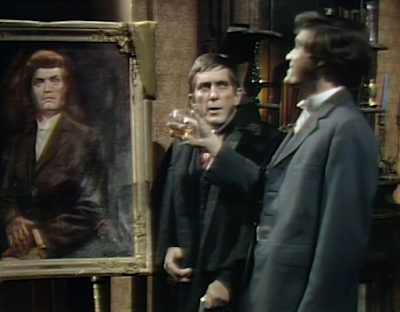 Barnabas returns to the rectory to find Julia missing, and the place ransacked. 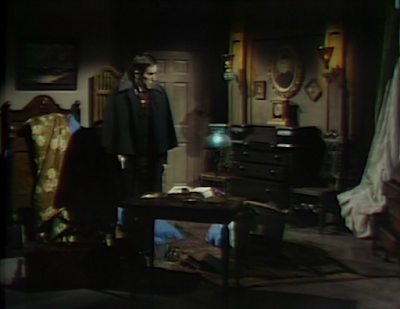 John: "No one can come back from the dead," says Quentin to his vampire cousin... I do look forward to the writers setting up whose bones will be found in Quentin's room in 1969.

Christine: Once again, Julia pronounces someone dead who turns out not to be dead. A little odd that Julia should be caught up in time, but I guess there was no other way to know if David would survive as a result of Quentin being saved on the 10th of September.

John: Just when you thought our 1897 flashback had reached it's conclusion, they come up with a new reason to keep us there. Of course I appreciate them not spending weeks having Julia fix Barnabas' affliction—give her a period dress, tell her to meet a bad dude she's never met before, and in the course of a commercial break, Barnabas is already well on his way to recovery from vampirism...

Christine: I'm just glad they didn't decide to reanimate a corpse with Barnabas' life force to cure him. Barnabas may not be totally clear on the family lineage since he claimed that if there was no Quentin there would be no Collins family. The good news is, David Selby is not going anywhere for awhile. Incidentally, I think someone forgot to give him a breakaway glass. 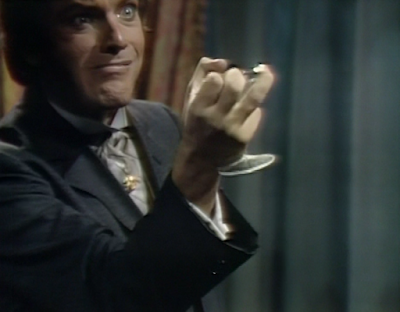 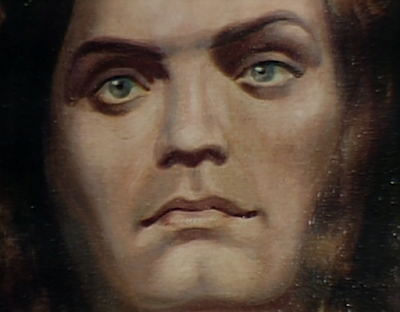 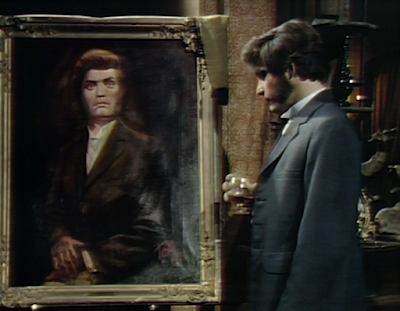 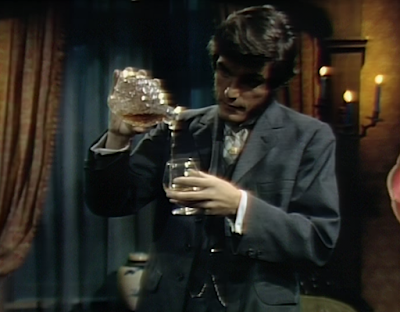 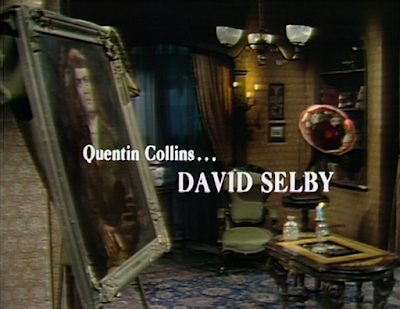 John: While it will be nice to have the change of pace with both future Barnabas and Julia hanging out together in the past, do you think this also means we've seen the last of Magda?

Christine: I imagine she'll turn up when Julia is off in town gathering resources for her injections. It was nice to have Julia and Barnabas reunite and continue their unspoken love affair. There were quite a few up close and personal moments between the two today. Perhaps their bond will grow stronger during their time in the past, especially if it turns out that Barnabas has to rescue her from Petofi. 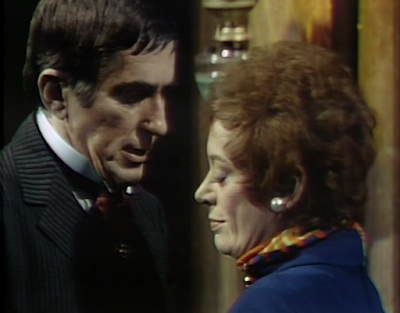 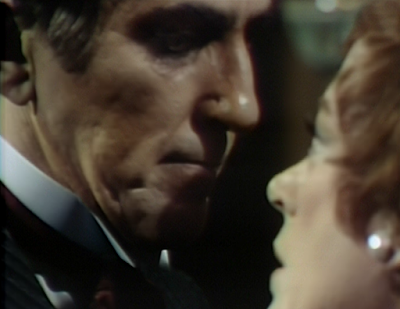 I thought--based on earlier episodes--that Dr. Lang's "cure" for vampirism involved siphoning it off to Adam's body. What cure does Julia Hoffman have with an injection?