Magda is in the old house when Barnabas rises. She tells him that he should leave tonight. She suggests that they will find him in his coffin. She says that she can understand how he thought he'd get away with the girls in the village, but now they've found his marks on Charity Trask. Barnabas asks who did, and she says her father and Judith. He asks her what they know. She says that a doctor assumed they were bites of an animal. Magda says that while she won't tell anyone, she and Sandor are in danger for helping Barnabas. She points out that he has taken Sandor from her. He assures her that his time in the past is limited, as he's trying to save someone's life in the future. 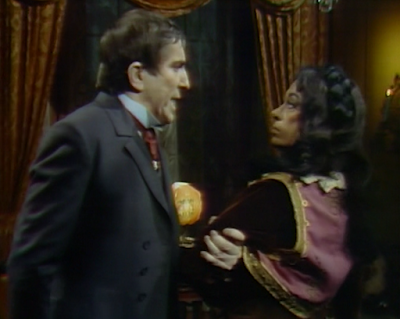 He asks her to spend the evening with Laura. He shows her the portrait of Laura, explaining that it was painted when he was just a boy. Sandor comes in, and Barnabas reminds Magda that she has her orders. She leaves, telling Sandor that his master has uncovered another secret in Collinwood. Barnabas says he's trying to figure out a way to defeat death. He tells him to seek out the crypt of Laura Stockbridge Collins, who died in 1785. He says he must know the truth about Laura if he is to beat her. 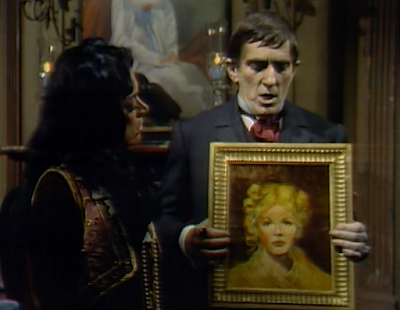 Edward and Laura come downstairs, and she asks him if it takes great effort to keep on hating her. He reminds her of the conditions under which he allowed her to stay, and asks why she is not staying in the cottage. She says it needs work. He asks if Quentin kept her in luxury when they ran off together. He tells he he wants her out of the house by morning. Magda arrives, and Edward tells her to help Laura move to the cottage that night. 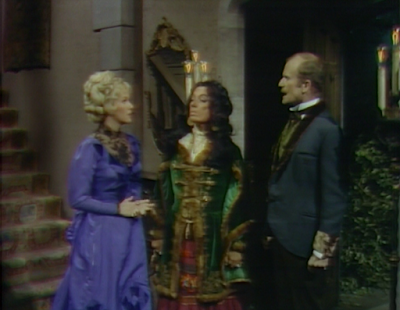 Sandor searches the crypt and finds the tomb of Laura Stockbridge Collins. 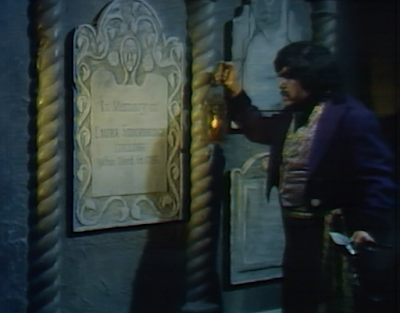 In the cottage, Laura tells Magda to take anything that's Quentin's, box it up and deliver it to him. She picks up Tarot cards, and Laura asks if she taught Quentin. She then asks about a doll, pointing out that there are no pins in it. She adds that he might be saving it for someone special, and Magda asks if that would be her. Laura asks Magda to read the cards. She says that her children will come with her. Magda asks if Quentin will come with her, too, and Laura says no. Magda begins dealing Tarot cards, and the first card up is death. 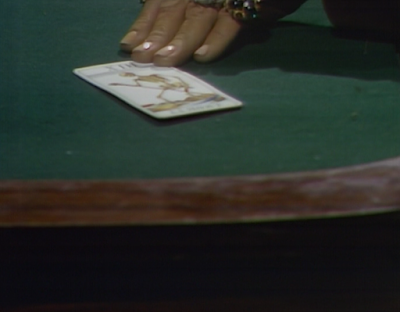 Laura tells her to start over, shuffling the cards, first. She deals death, again. Laura accuses her of doing it on purpose. She says there's no death there, and Magda assures her there will be. Laura imagines it must be Quentin, and asks her to continue. Magda says it has already taken place. Laura tells her to return his cards, and storms out. 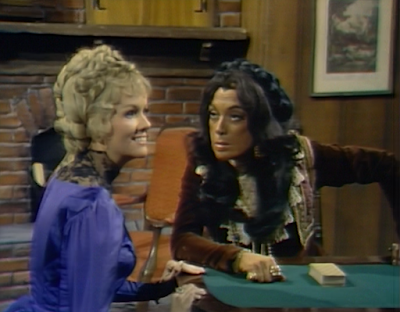 Edward and Barnabas share a drink in the old house. Edward tells Barnabas that Judith has invited Trask to move his school to the estate. Edward says he doesn't think it's a good idea. Barnabas asks why, and Edward says it's Laura. He asks Barnabas how well he knows Laura, and Barnabas tells him he can't honestly answer. Edward tells him that she had run off with Quentin. He adds that she's determined to take the children. Barnabas asks about Laura's history, and Edward says she doesn't like to be questioned about her family, and describes how when he researched information on where she attended school, the stories she told him proved not to be true. Edward asks Barnabas to help him by talking to Judith, and he agrees. 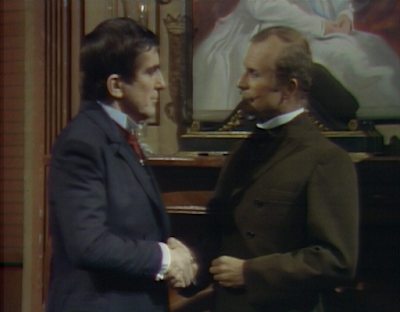 Sandor interrupts them, and Edward thanks Barnabas for his help before leaving. Sandor tells Barnabas he found the tomb. Barnabas says they will meet there at midnight, after he meets with an old friend.

Barnabas arrives at the cottage with something for Laura. He says he found it in the attic of the old house. She opens it and finds it's her portrait. She says it's incredible, and asks Magda to look at it. She says she might have sat for it herself, and Barnabas says that's true. He adds that she must have had relatives in the area 100 years ago. Laura says that the more she looks at it, the less it looks like her. Magda says it looks just like her. Barnabas excuses himself, and Laura thanks him for the portrait. Once he's gone, she tells Magda to put the portrait in a closet. 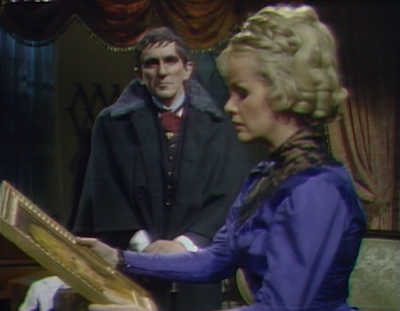 Sandor tells Barnabas that he doesn't want to open Laura's tomb. Barnabas assures him that it is empty. Sandor reluctantly chisels the tomb open.

Laura hears a hammering noise. Magda says she hears nothing. She suggests that Laura rest, but instead Laura runs out of the cottage. 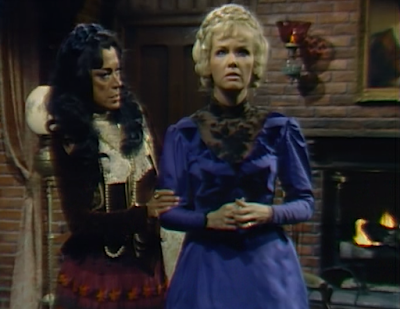 As he stands over a closed coffin, Sandor tells Barnabas that they will be punished. Barnabas demands that he open the coffin, but lifts the lid himself. 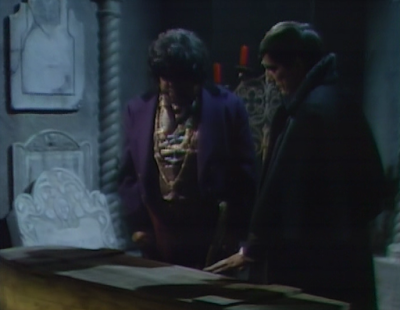 John: Funny how all the ladies in Barnabas' life seem to be just fine with his preying upon the common streetwalkers in Collinsport. We'll see if his putting the bite on Charity comes back to haunt him.

Christine: I don't understand why Barnabas feels threatened by Laura and assumes she's out to defeat him. She surely will be, now that he's tinkering around with her coffin.

John: If you were Laura, wouldn't you have tossed that portrait into the fire as soon as Barnabas left? Of course it would have been ironic if it turns out the portrait of the Phoenix can't actually be burned...

Christine: Oh, I think it's as flammable as all the other portraits of her we've seen. Angelique's is the one that resists destruction by fire. Maybe Barnabas will find her portrait next if he does a little more rummaging around in the attic of the Old House.

John: This show has single-handedly made opening empty coffins a soap-opera trope. As a result, this Friday's cliffhanger is somewhat anti climatic.

Christine: Perhaps this time will be different since they know we're expecting an empty coffin. It certainly would be a nice surprise if we found a corpse inside that coffin. Laura's gravestone has changed from the one we saw in our very first visit to a cemetery on Dark Shadows in Episode 154, but at least they're still using the same set to house it. Too bad the creepy Caretaker isn't around to greet Sandor and Barnabas. 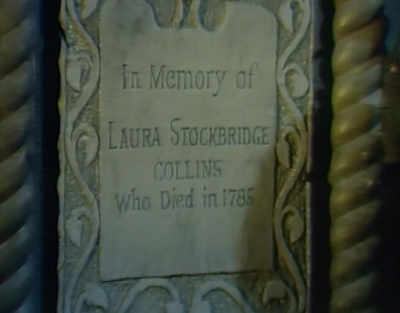 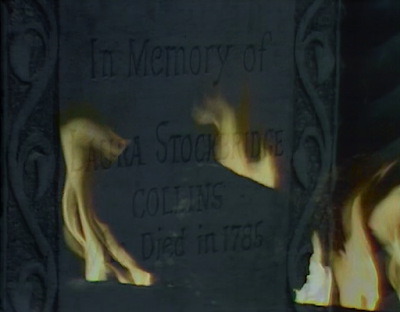