Magda brings Rachel to the mausoleum, where she can stay safely for one night. She asks Rachel if she has money for a carriage. Rachel explains she has nothing, and Magda says she can sell her jewelry to cover the cost. Rachel reluctantly agrees. Magda opens the secret door in the mausoleum, and Rachel appears shocked to see what's inside. They go in, and Magda tells her she'll bring her food and water, and she'll be safe. Rachel also requests a lamp. Magda says she will bring one, and says she can talk to Barnabas. Rachel tells her not to. Magda asks if she has seen his fianceé, and says they deserve one another. 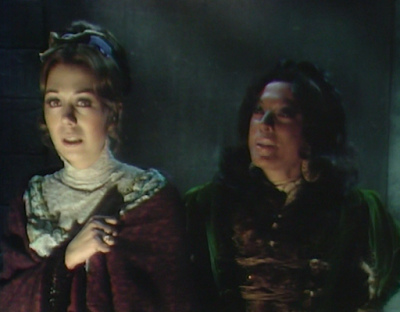 Tim asks Jamison why he turned in a blank sheet of paper. Jamison tells him to tell Trask that he hates him, and wants to go back to Rachel. Trask walks in and asks why Jamison is being held after class. Tim doesn't rat on him, and Trask sends Jamison to his room to study. 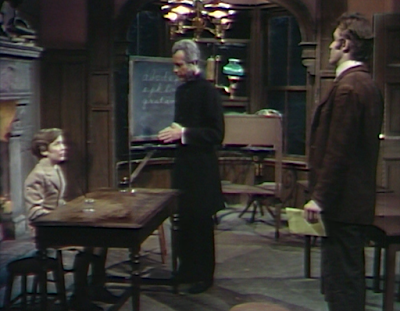 Trask tells Tim that Jamison wants discipline, and he will have it. He describes children as animals that can be taught through fear. He points out that Tim wasn't at dinner, and Charity was upset. Trask tells Tim he needs him to return to Collinwood, as Rachel has decided not to return to them. Tim says he won't have anything to do with bringing Rachel back. 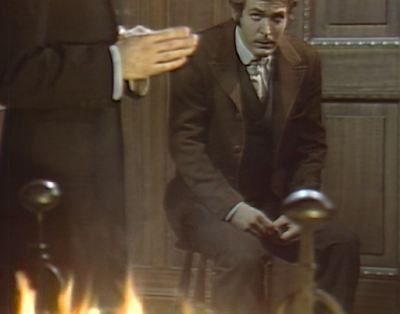 Trask tells him that Barnabas Collins has been helping her, and will tell Tim where she is. Tim asks why Trask needs Rachel back. He asks if it's enough that he has him, and he has agreed to marry Charity. He refuses to go. Trask reminds him about the murder charge that hangs over his head. Trask tells Tim that he must be sincere when he deals with Barnabas. 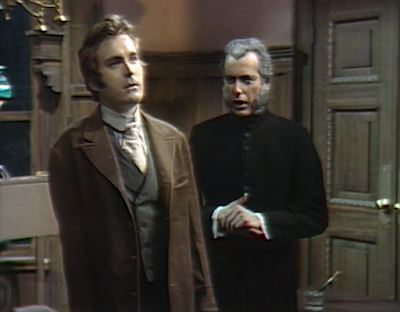 Trask goes outside and finds Jamison eavesdropping. He grabs him by the arm and takes him back into the classroom. He sends Tim away and shuts the door. He tells Jamison to sit. He points out that he never had to live by rules, and he will have to learn. 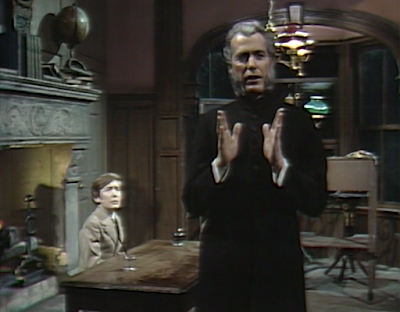 Trask asks if he's heard stories about being punished. He shows Jamison a closet and tells him to go inside. Jamison says he doesn't want to be locked up. Trask assures him there are worse punishments, and Jamison reluctantly goes in. As Trask leaves the outer room, Jamison shouts how he didn't know the rules. 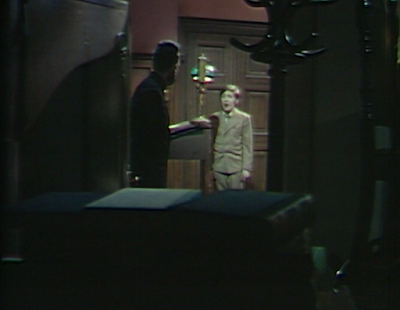 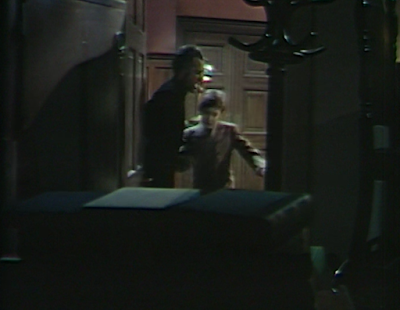 Tim arrives at the old house to see Barnabas. Magda says he's not there. He says he needs to know where Rachel is, and is sure Barnabas knows. She tells him they're not friends. He spots Rachel's brooch, and demands that she tell him where to find Rachel. She says Rachel gave her the brooch to raise money. He offers to bring her money, and Magda tells him to return when he has it, and she'll find out where Rachel is. 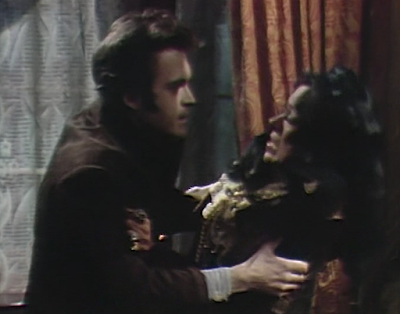 Jamison tries to find a way out of the locked closet. He makes a lot of noise, but is unsuccessful. He then finds a key, and wonders why it would be in the room if it's for the door. He tries it and it works. He gets out of the closet and is grabbed by Trask. 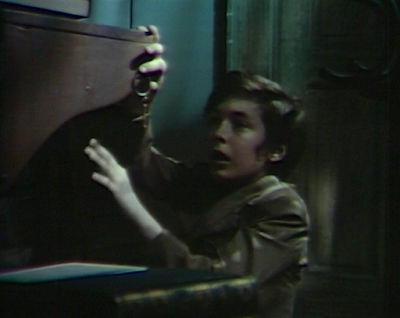 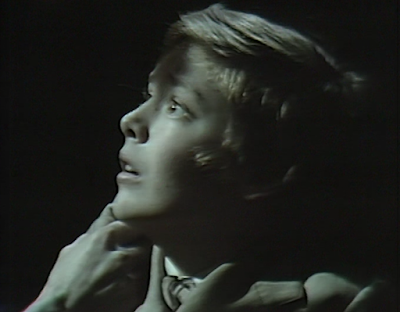 Trask tells him he's going to learn a lesson in honor. He adds that a boy who knew he was being punished would have resisted the temptation to take the key. Tim comes in and tells Trask he has news, and to let the boy go. Trask tells Jamison that they will discuss his punishment in the morning. He sends Jamison away. Tim tells him that the gypsy told him that Rachel and Barnabas are no longer friends. 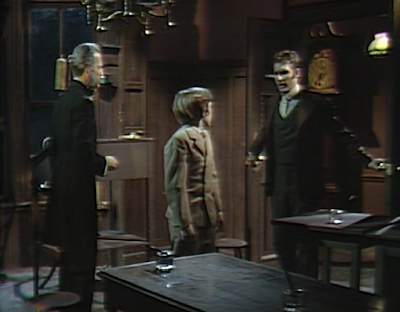 Magda asks Rachel if she trusts Tim, and should tell her where she is. Rachel doesn't know if she should trust him, but decides to.

Magda takes Tim to the mausoleum. She checks if he's got the money, and then tells him to give it to her himself. He also gives him the brooch to give Rachel, and tells him how to access the secret room before she leaves. 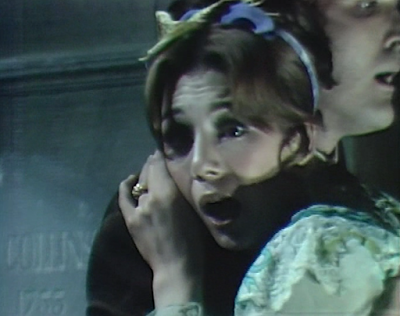 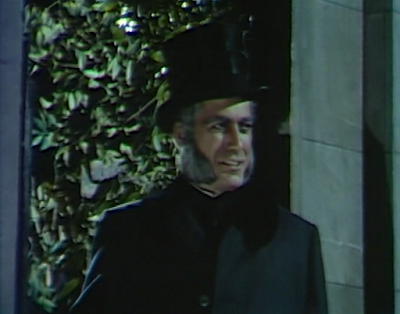 John: Boy, that classroom doesn't seem big enough for more than one student. I guess we'll probably never see more than two students in it... 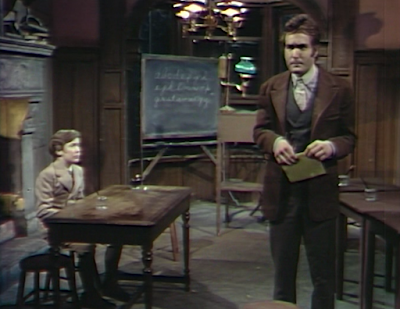 Christine: I love Don Briscoe's school master look. Totally hot! Jamison must be far behind in his studies if he is still learning the alphabet that's posted on the chalkboard. 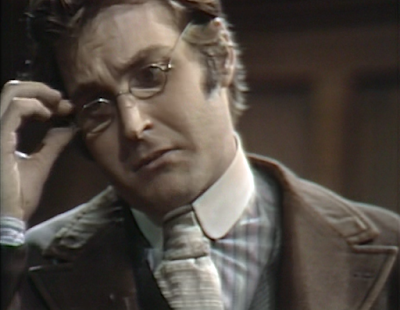 John: I'm expecting quite the array of torture devices in Trask's collection. We'll see if Jamison or Rachel gets introduced to those first!

Christine: I'm guessing he doesn't have anything fancier than the standard switch or ruler applied to a backside or knuckles, though the punishment he promised Jamison to spend the whole day with him seems traumatic enough, with or without any corporal punishment.

John: I have to admit, I was surprised when Magda gave Tim the brooch to return to Rachel. A gypsy with a heart of gold... 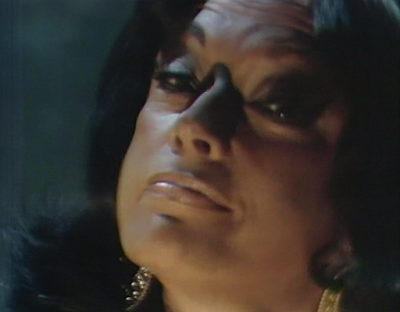 Christine: Too bad she decided to take off and allow Tim to let himself in to the not-so-secret room in the mausoleum before finding out whether or not he could be trusted. 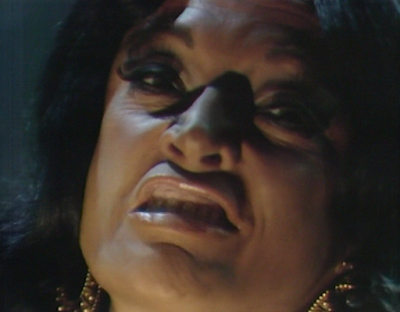