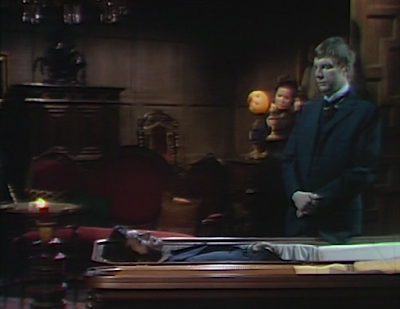 Carl stands over Quentin's coffin while Judith calls to contact Edward. Carl berates Quentin, and then stops in shock. He tells Judith that he moved. She tells Carl to stop joking. She says it wasn't easy telling the police what happened. He says she convinced the police quickly. She tells him that she's sure a transient sailor killed him, and is either at the docks or off to sea already. Carl points out that it was Quentin's own knife, and the killer could still be here. He says that Quentin's family, friends and women had reasons to hate him the most. Carl asks what Barnabas was doing there when Quentin's body was found. And why he wouldn't be a pallbearer at their grandmother's funeral. Carl says he has another theory—he says the knife is a gypsy weapon. Judith asks when he'll get around to accusing her, and he says that's what he really thinks. He then says it had to be a woman. Judith says if Edward wasn't in Bangor, Carl would probably be accusing him, too. 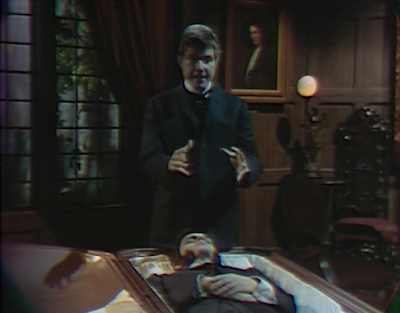 Rachel is in her room when Jamison comes in looking for his trains. She asks him to sit down. He asks if something happened to Nora, or his father. He then asks if Quentin was hurt and she says it's worse than that. He realizes that Quentin is dead. He walks out of her room. 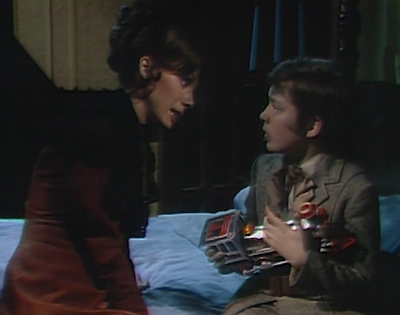 Carl tells Judith he was absurd to think Quentin had moved. He says he looks peaceful. Jamison comes in and sees Quentin in the coffin. Judith explains that Quentin is dead, and Jamison says that he's not dead.

Jamison listens to Quentin's theme and begs for him not to be dead. He says he's going to play the music over and over again until he hears it. 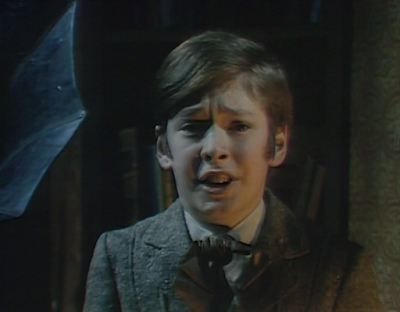 Quentin's body lies in the coffin. His theme can be heard playing slowly, warbling.

Jamison begs for Quentin to come back, and not leave him.

Quentin's coffin lid closes on its own.

Jamison says that if Quentin doesn't want to come back, then he doesn't want to hear anything that makes him think of him. He stops the music and hears Quentin say that they will always be as one. Jamison exclaims that Quentin has come back. 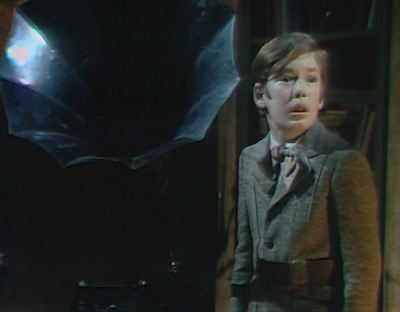 Judith comes downstairs with Rachel. Carl runs out of the drawing room and asks if she closed the coffin. She says it was open. Carl says that now it's closed. Judith tells him he's old enough to know better. Carl runs upstairs. Judith tells Rachel that they must do something for Jamison. She asks if Rachel will take him on a picnic. 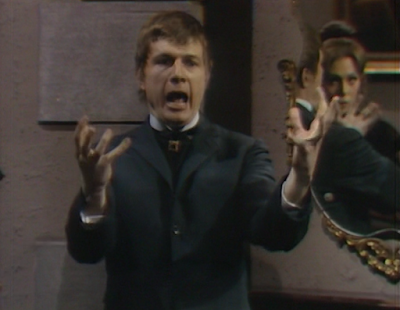 Carl rushes into Quentin's room, where Jamison listens to his theme. Carl says he doesn't like what's going on. He says that Quentin isn't dead, and he thinks Jamison knows more than he's saying. He yells at him to shut off the Victrola. He stops it, and tells Jamison that he's his uncle. Jamison tells him that he's his brother. He then repeats what Carl had said earlier about a woman killing him. He says the woman who killed him is still in the house. Carl is frightened. 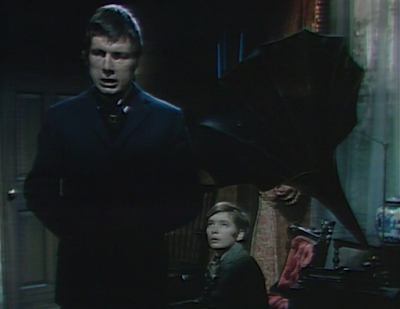 Judith and Carl stand before Jamison. He refers to her as his brother. Judith says Quentin is downstairs in a coffin. Carl says he told her that the killer is still in the house. Jamison then says what Judith's theory was, the one she described while standing over his coffin. Judith says he's possessed and they leave him in the room, laughing hysterically. 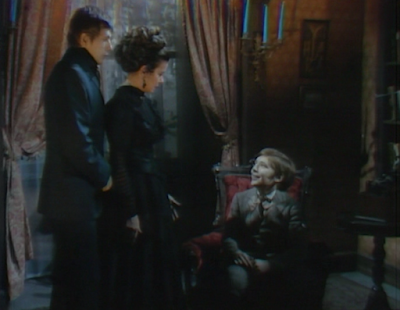 Rachel has a dream in which she hears Jamison asking where he is. She goes into the hall and sees Judith locking doors, saying who will ever know in response to Jamison's question as to where he is. He says she will know. Judith tells Rachel to go to the drawing room until she is called. She adds that a child only speaks when spoken to. 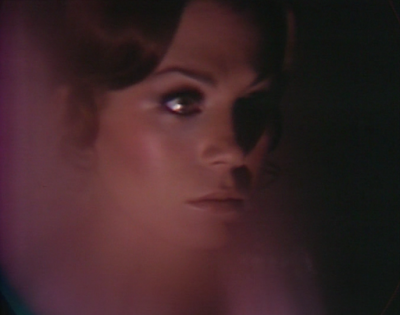 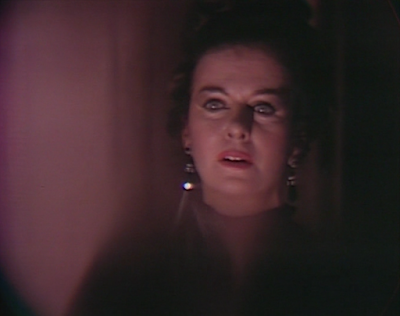 Rachel then runs into Carl, who says it's too late. She hears Jamison asking where he is, and she goes into the drawing room. Quentin's coffin opens, and inside she sees Jamison's body. He sits up and tells her that now she knows where he is, and laughs. Carl and Judith appear, and laugh with him. Jamison lies back down in the coffin. 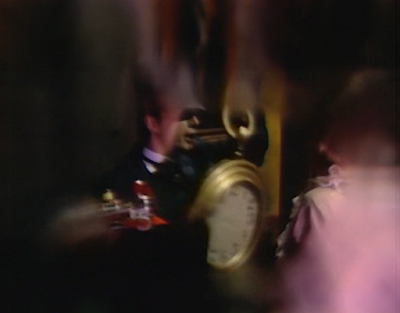 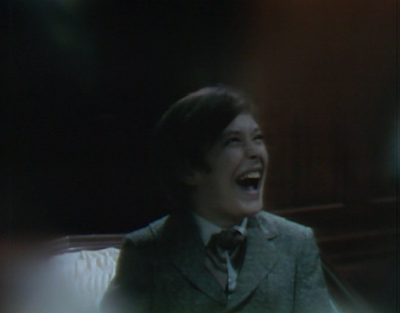 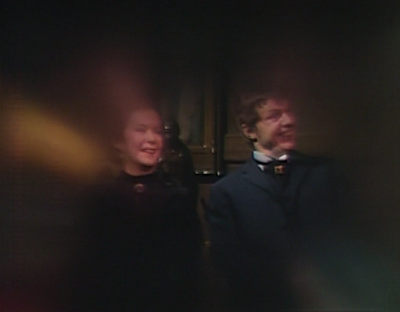 Rachel wakes from her dream, and Quentin is sitting in a rocking chair beside her bed. 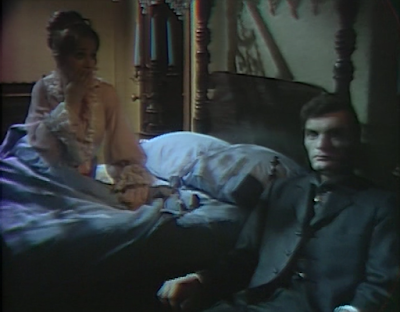 John: A relatively light work day for Quentin today, as he gets to take his turn spending most of the episode lying dead in a coffin. It's worth pointing out that the constable in 1897 is even less interested in solving crime than the sheriff of 1969. They were in and out of Collinwood so fast that we never even saw them!

Christine: What's another dead corpse up at Collinwood anyway? I think it may be much harder than it looks to play dead, especially with nutty Carl gesticulating and possibly spraying spittle over you.

John: John Karlen is really making the most of his appearance as Carl. As much as I like him as Willie, the range of that character pales in comparison to kooky Carl. 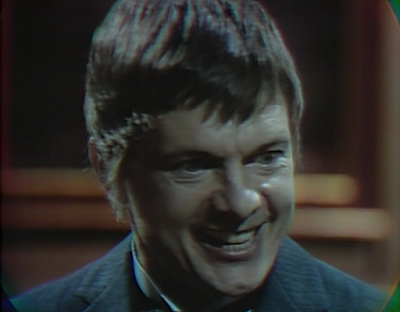 Christine: I completely agree. I really enjoy his performance as Carl. I was hoping prankster Carl might delight us with an April Fool's Day joke today, though his silly appearance with the train and handless clock in Rachel's dream was entertaining enough.

John: Too bad we haven't been keeping a dream sequence log... today's was another good one. Of course the best part was Rachel waking to find creepy Quentin rocking beside her bed! The ending was up there with Quentin's first non-speaking ghostly appearances in 1969!

Christine: It would be scary enough waking up to find live Quentin next to your bed after a bad dream, but much worse to find zombie Quentin there. I wonder if his zombie status will make his presence more tolerable for the ladies in the house or not.
Posted by John Scoleri at 6:00 AM

The scene of waking up to find zombie Quentin sitting in the bedside chair is one of the scariest in the series! I would run screaming from the room if that happened to me!