Dirk explores the cottage, and almost trips over Quentin's body. He's lying on the floor with a knife in his chest. Dirk gets up and turns to find Barnabas in the doorway. He tries to get by him, but Barnabas says he's going to stay and answer a lot of questions. Barnabas asks if he wants to talk to him or the police. Dirk says he had nothing to do with it. Barnabas accuses Dirk of having a motive—a shared interest in Beth. Dirk asks him how he got there so soon, and Barnabas says he followed him from the old house. Dirk says that he can provide an alibi, and Barnabas says he'll help Dirk only if he helps him. 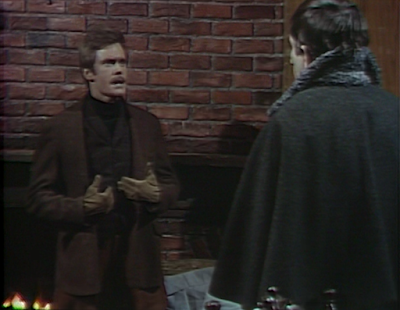 He accuses Dirk of lying to him when he said he was looking for a child. He asks who he was really looking for. Dirk says he can't say because he gave his word. Barnabas says that's before he was the prime suspect in a murder. Dirk says he doesn't want to lose his job, and Barnabas assures him it won't be jeopardized. He says he was searching for Jenny. He says she's crazy, and could hurt herself, or somebody. Barnabas realizes that she was the one locked up in the tower room. Dirk says she was until they moved her into the basement. Barnabas asks if she's Edward's wife, and Dirk says that she is Quentin's wife. 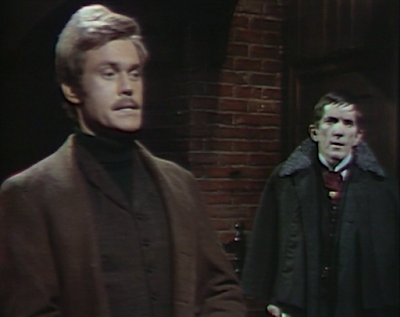 Beth brings Jenny back to her room, where she's happy to see her baby dolls. Jenny talks about Quentin, their brief relationship, and she adds that she kissed him tonight. Beth is upset to find out that Quentin knows she's there. She says he'll try to send her away. Jenny says it won't be a problem. She tells her Quentin is gone forever. Beth asks how, and Jenny says he would have taken her babies away, so she had to kill him. 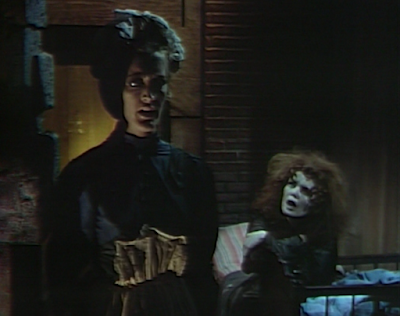 Dirk tells Barnabas that they have to leave the cottage and notify the family. Barnabas says they can't do that yet. He says they think he's out searching for Jenny. He tells him to return to Collinwood and tell them he didn't find anything. He leaves Barnabas alone with Quentin's body. Barnabas calls to Angelique, asking her to come to him. 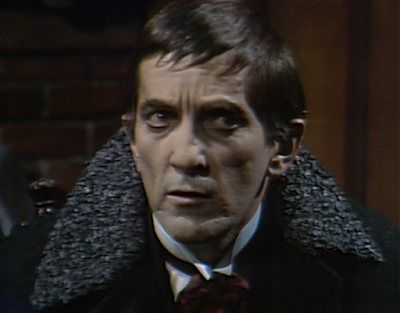 Beth asks Jenny where she saw Quentin. Jenny says he couldn't take her babies away. Beth continues to press her to remember where she saw him. She asks if she saw him in the woods. Jenny asks why she wants to know about Quentin. Beth asks if Quentin is alive, and Jenny says he's gone away and will never come back. Jenny accuses Beth of being in love with Quentin. She says there were so many other women. Jenny says she doesn't care any more. She asks Beth why he wants to see him. Jenny says he didn't think he'd see her in his love nest, which Beth realizes is his cottage. She runs out to find him. 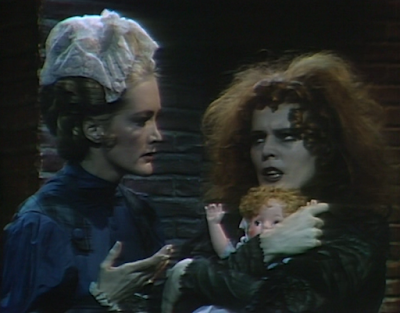 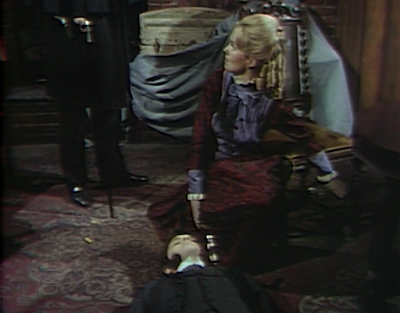 Angelique blames him for changing time with his presence, and points out that other things will have changed. Barnabas admits that's true, and says that he's trying to save two lives when he goes back to the future. She realizes that it's important to him. He asks her to name her price, and she says she intends to do everything in her power to show him that it's impossible for him to reject her. She says she'll revive Quentin when there's a knock on the door. 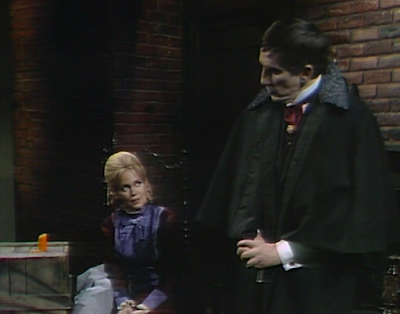 Barnabas says they must do something with the body, but when he turns, Angelique is gone. Beth comes in and sees Quentin's body. She screams and tries to get to him, but Barnabas pushes her outside, telling her he's dead. Beth said she didn't want to believe it, but she knew it was true. Barnabas asked if she found Jenny, and she says she did. He tells her to go back to Collinwood and say nothing. She asks why, and he says he can't tell her. She says she'll tell Judith, who will be most interested in what she has to say. She leaves him to return to Collinwood. 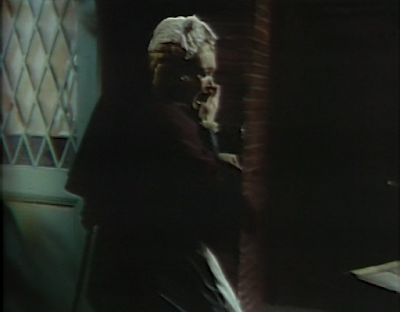 Quentin's body lies in a coffin in the drawing room at Collinwood. Beth stands over him when Barnabas comes in. He asks if she spoke to Judith, and she says she hasn't yet. She asks Barnabas why he wanted to keep the body at the cottage, and he says she wouldn't understand. She asks him to tell her anyway, and he says not now. She says she finds him very disturbing, and bids him goodnight. 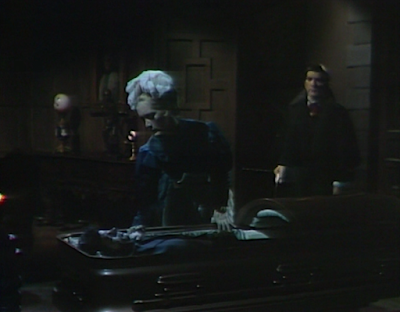 Barnabas leaves, closing the doors behind him. Angelique appears in the drawing room and approaches Quentin's body. She says that when she gives the command, Quentin shall rise and walk again, and do whatever she tells him to. She adds that together they will bring Barnabas to his knees. 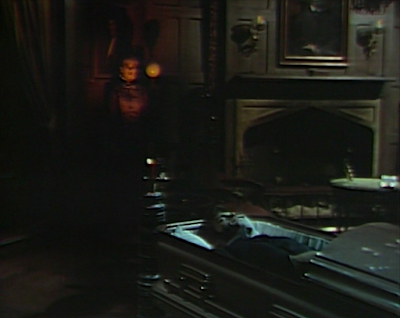 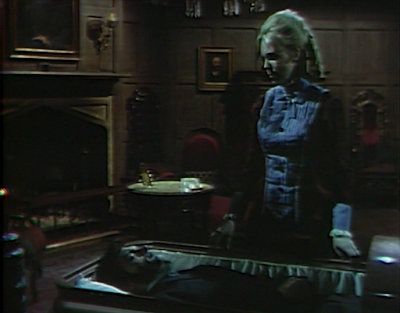 John: I was hoping Barnabas would get a chance to use his leverage against Dirk, but it looks like Quentin will be back to life before he gets that chance.

Christine: I hope Angelique makes him a zombie slave. I think Barnabas will still be able to easily manipulate Dirk. There was more evidence today that Dirk is somewhat mentally challenged. That blow to the head from Jenny probably didn't help matters much. 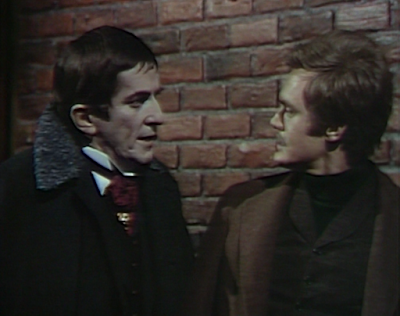 John: Good thing they keep a spare supply of coffins around Collinwood for just such an occasion. Did they stop to think that someone might be freaked out to walk into the drawing room to find their dead brother lying in there? Or since it was Quentin, did they just assume they would be happy?

Christine: Yes, it always surprises me how the family can pull out a coffin or wedding dress on a whim. I'm wondering who was tasked with lugging Quentin's corpse from the cottage in the middle of the night. 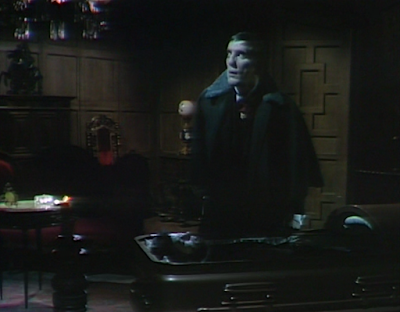 John: Once again, we're treated to Angelique, the great and powerful. How many times through history will Barnabas make a deal with her before he realizes that things will never work out the way that he's hoping? And doesn't he realize that preventing Quentin from getting locked in his room would likely prevent his ghost from possessing the children in the future? Wasn't that his original goal? Oh well, I guess that's why we've still got a long stretch of 1897 in our future.

Christine: It makes me wonder how Barnabas intends to accomplish his mission, or how he will confirm that the changes he has made to history will bear the results he desires. Barnabas can't seem to break away from his toxic relationship with Angelique, and though she says she'll make him see that it's hopeless for him to reject her, I think we can expect him to continue to do so. He won't ever learn from his mistakes with Angelique if he can't even remember how she screwed him over the last time she offered to help him. 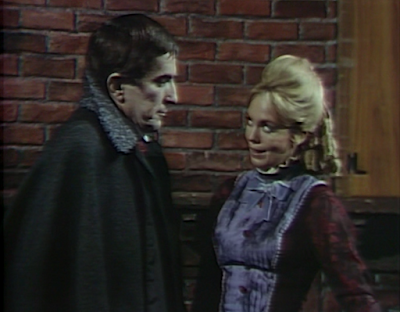