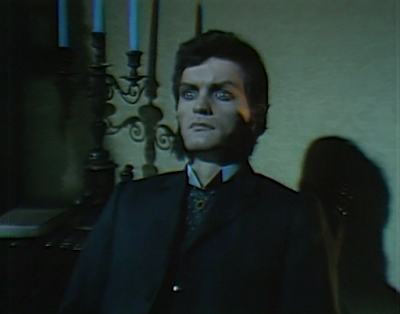 Rachel wakes from her dream. She gets out of bed and walks around the room. She hears the creaking of a rocking chair, and turns to see Quentin sitting in the rocking chair beside her bed. She runs out of her room, screaming. 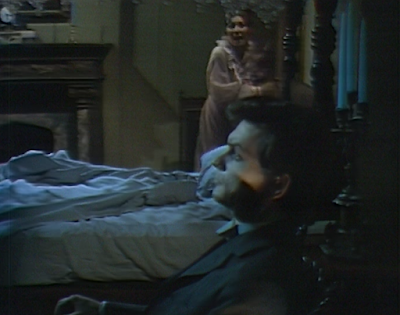 Carl and Judith find her and she tells them Quentin is in her room. Judith assures her she was dreaming. She tells Carl to go in and confirm that no one is there. He reluctantly does so. Carl goes into Rachel's room and confirms that Quentin isn't there. Judith tells Rachel that she'll take her downstairs to show her Quentin is in his coffin. 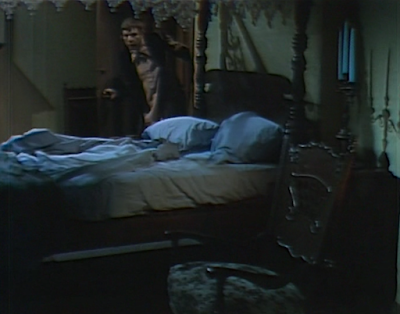 They go into the drawing room and find the coffin open and empty. Judith starts to faint. They help her into the chair. Judith asks how well Carl searched Rachel's room. He says he checked the rocking chair, and it was empty. Judith sends him back upstairs to investigate. Rachel asks if Judith thinks the person responsible for the body being missing might be the one who killed him. There's a knock at the front door, and Rachel goes to answer it. 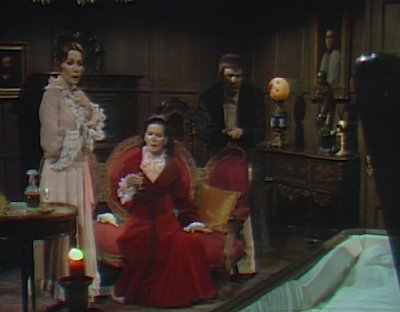 Carl returns to Rachel's room and looks around. He checks under the bed, and finds nothing. He sees a shadow in the doorway and screams. 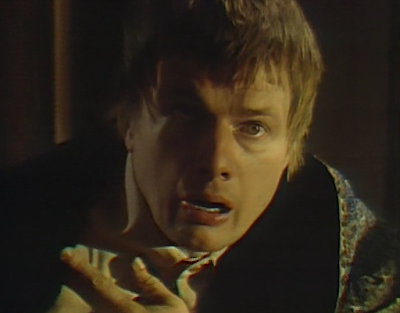 Barnabas tells Judith and Rachel that he wishes he had arrived sooner. He says there's a secret panel in Rachel's room. Judith says he's never been in her room, and he explains he has a rare volume written by the architect of Collinwood. 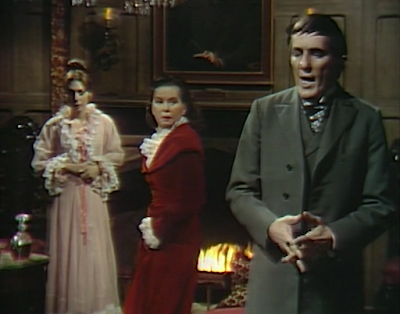 Carl checks the hall, and then pulls back a curtain to find Quentin. He approaches him, and Carl screams. 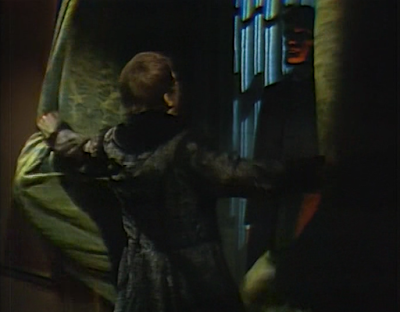 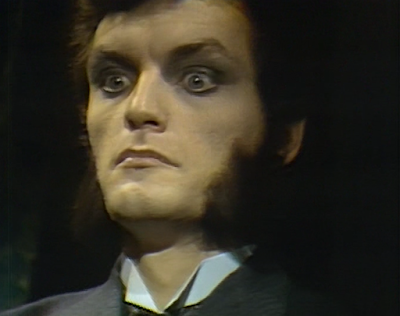 Judith and the others run upstairs when they hear Carl. 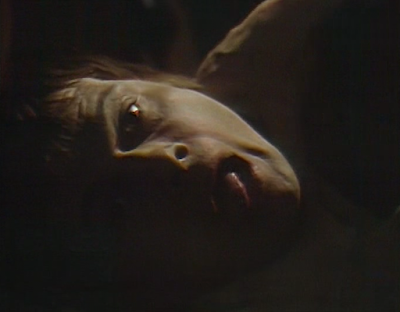 Carl is in the drawing room. He wakes and tells them that Quentin was choking him. He says his eyes were empty. Judith assures him that Quentin is dead. Judith says no man can rise and walk again after death. Barnabas says that under the circumstances, Quentin can. He goes to find him, and says when he returns he will try to explain everything. Rachel tells him to be careful as he heads upstairs. 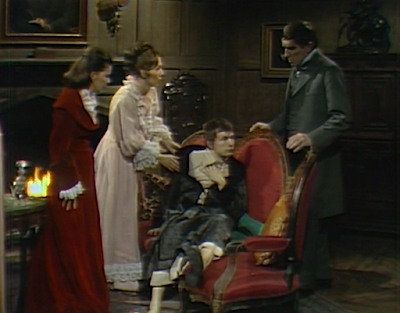 Barnabas comes downstairs, and says that Quentin is gone, at least for now. Judith asks for an explanation. Barnabas says Carl's description of Quentin reminded him of zombies that he heard about in Martinique. Judith doesn't understand how that could happen. Barnabas says that someone is using Quentin as a mindless hulk. Barnabas says to never mind who did it, but to try to find a way to stop it. He describes a way they can fix it, but says he must go to the old house. He leaves, and Carl escorts the women upstairs. 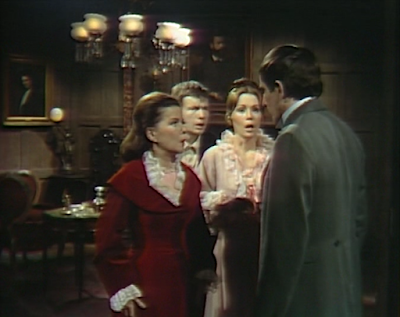 In the drawing room, incense burns as Barnabas and Carl stand over the coffin. They hear someone, and step into the shadows.

Quentin comes downstairs, and into the drawing room. They watch as he opens the coffin. 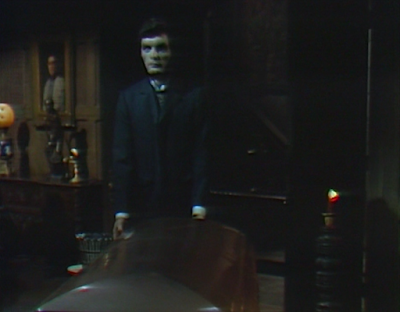 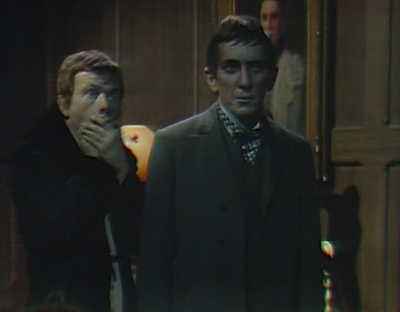 Rachel and Judith are in her room when Carl comes upstairs. He tells them Quentin has returned to his coffin.

Barnabas stands over Quentin, knowing that Angelique is responsible. He thinks he knows what to do. Judith comes downstairs and tells him that she's prepared to have cement poured over the coffin once buried. Barnabas says he doesn't know if that's necessary. Judith says that she must find Quentin final peace. 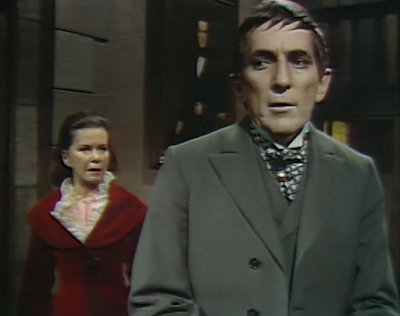 Carl and Barnabas begin to fill in the grave containing Quentin's coffin.

A slab of cement covers the plot where Quentin was buried. 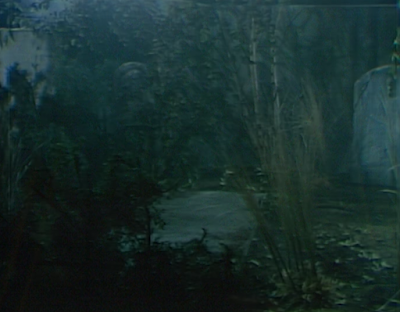 Judith finds Rachel in the drawing room and tells her that Quentin will not rise again. Rachel asks if Barnabas is coming back, and Judith says he returned to the old house. Judith leaves and Barnabas comes in. He says he needed to confirm that she was alright. Rachel tells him that she's leaving Collinwood in the morning, because she's too frightened. He tells her that he wants her to stay, and he asks her to trust him and at least stay until he comes back. He leaves, and as she turns out the lights, the door opens. She assumes it's Barnabas, and when she steps outside, she walks into the outstretched arms of zombie Quentin. She passes out and he picks up her unconscious body. 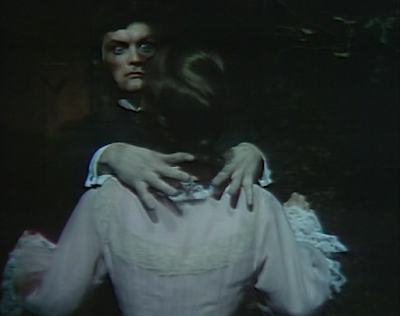 John: I love how Barnabas so quickly explains away his familiarity with the house's secret passages. I'm curious if Judith knew about them as well.

Christine: It was difficult to tell if she was surprised because Barnabas knew of the secret passage, or because she did not.

John: We can check one more monster off our Dark Shadows bingo card! Welcome zombie Quentin! While NIGHT OF THE LIVING DEAD had opened in October of 1968, it would not yet have risen to the level of influencing a TV show, and at that point, those creatures were considered ghouls, not zombies anyway. So our Dark Shadows zombie comes from the Voodoo school of the undead. But technically, and Barnabas should be aware of this, zombies weren't actually dead people. They were just drugged into a controllable state. Oh well, I guess he never really liked Quentin, anyway...

Christine: He's definitely a Martinique style zombie, which would make sense since Angelique is responsible for his zombification. That certainly was an impressive plume of incense billowing out of the vessel after its weak start. It probably still smells like myrrh in there in 1969. 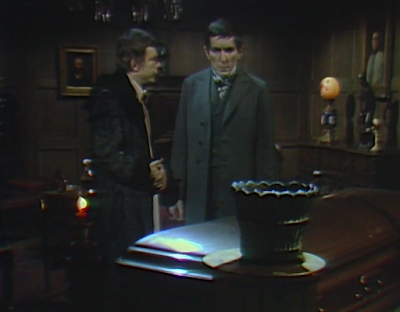 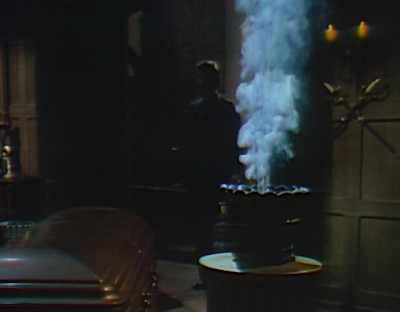 John: Zombie Quentin might be even more frightening that ghost Quentin! Of course I'd love to know how he crawled out of the grave, particularly with the cement blocker.

Christine: Not only did they have to dig the grave and lower his coffin, but also pour and smooth out the cement, all within a few hours time. Clearly the cement did not have time to dry and was easy to break through, though it's more likely that Angelique helped free him so her zombie boy slave could kidnap Barnabas' new girlfriend tout de suite. Zombie Quentin is all that I hoped for, though it seems I was wrong that the ladies of the house would suffer less from his presence as a zombie. 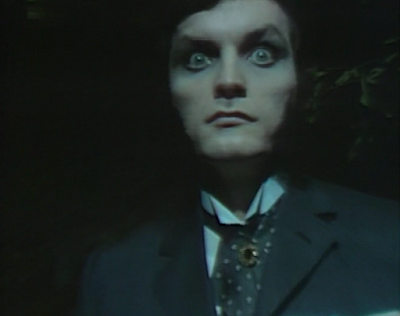