Barnabas sees a light in the room where Charity is staying.

Charity sleeps while a bat flies into her room. Barnabas emerges from the darkness and leans in for a bite. 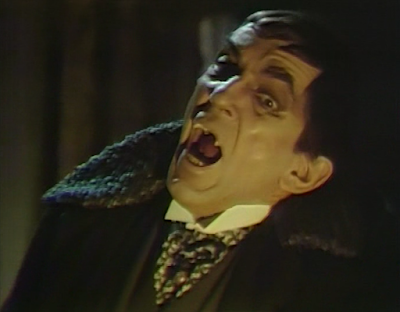 Barnabas asks Charity if she's aware what happened to her. She says she is, and tells him she belongs with him. He tells her that she is under his influence, and cannot resist him. He bids her goodnight. 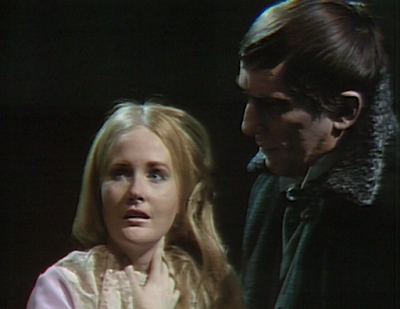 Edward arrives home at Collinwood, and is greeted by Nora. She says they were afraid he wouldn't get back in time, and he asks her what's wrong. She says their aunt tried to send them away to a school last night, and he tells her that it was his idea. She's upset that he would want to send them away. She tells him they like Rachel, and are happy at Collinwood. She says that they'll die if he sends them away. He says they'll discuss it with Jamison after dinner. She tells him that Jamison ran away last night. Edward is surprised they reacted as they did. He sends her off to play and pours himself a drink. 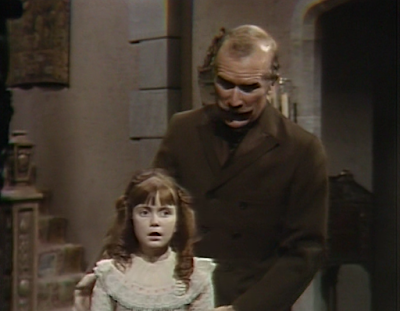 Charity comes downstairs, and Edward asks about her father. She explains he had to return to the school. She asks if Jamison has been found, and he tells her that he hasn't, but he's not concerned. Charity tells him the school will do him good. He asks her if she's alright, and she complains about the brightness of the foyer. He leaves her to call her father. She goes outside and holds her hand over her eyes. 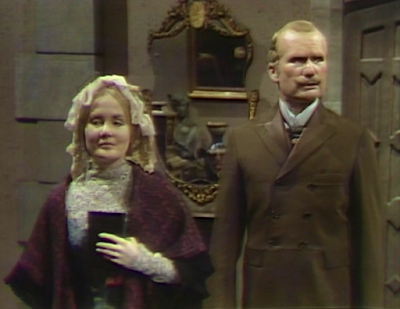 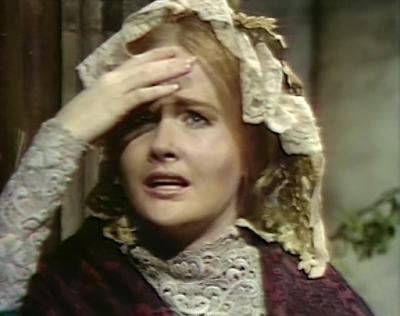 Edward finds Quentin rifling through his things in his study. He says he's not surprised to find his brother there rather than out searching for his favorite nephew. Quentin says he's sure Jamison will appear once Edward gives up on the notion of sending him away to school. Edward asks what he hoped to find in his personal papers. Quentin tells him information, but now that he's back, he can tell him. He asks where Jenny is. Edward asks who told him, and Quentin explains that she escaped from where he had her locked up, she found him in the cottage and stabbed him. He says Quentin appears to have made a miraculous recovery. Quentin says that he had even been declared dead! 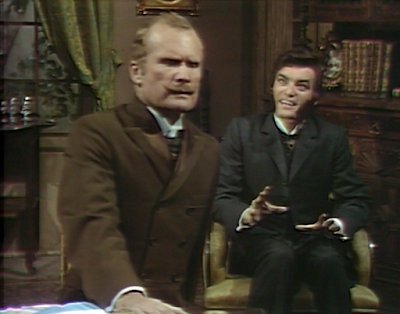 He asks again where Jenny is. Edward refuses to tell him. He says that after he abandoned her, he took it upon himself to look after her. Quentin then brings up Edward's wife. He asks why he hasn't asked about Laura, after she left the house and followed Quentin halfway around the world. He says he last saw her in Egypt, and Edward forbids him of speaking of her in the house. Nora comes into the study and asks if she can draw at his desk. He allows it, and leaves her with Quentin. Nora asks him if he thinks her mother is ever coming back. He tells her that he doesn't know. 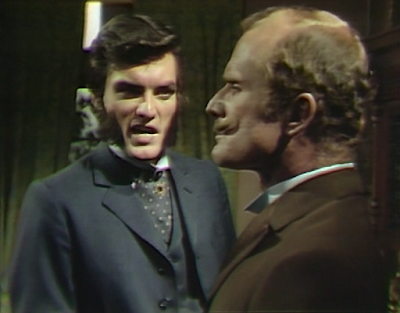 Quentin finds Edward in the drawing room. He says that if he tells him where to find Jenny, he'll tell Edward where to find Jamison. Edward refuses, but demands that Quentin produce Jamison within the hour. Quentin says he'll have his son, and sooner or later he will find Jenny, and when he does, he will kill her. 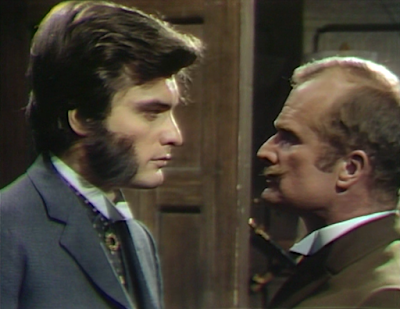 Nora has drawn a number of Egyptian figures on a piece of paper. Barnabas finds her in the study and asks about her father. She says she hasn't seen him since the afternoon. He asks what she's been drawing, and she shows him the page of Egyptian symbols. He asks if she copied the hieroglyphics from a book, and she tells him they just came to her. He wonders what they mean, and she says she can tell him what they mean. He asks if she's playing a joke on him. She tells him that they mean her mother is coming home. She explains that she's been gone for a year. 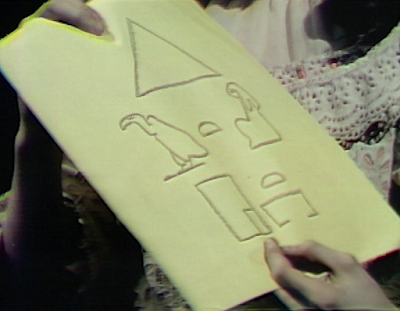 Edward enters and tells Nora to excuse them. Barnabas tells him that Nora brought up her mother, and shows him the drawing she made. 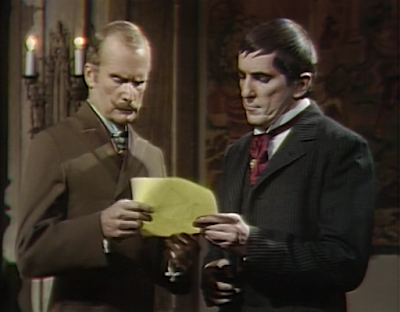 Nora is transfixed by the fire burning in the drawing room.

Barnabas asks if the drawing means anything to him, and Edward writes it off as Quentin's scheming. Barnabas asks Edward about the school he plans to send the children to. Edward says Jamison is back, he spoke to him, and has promised to think for a day before deciding whether to send them.

Nora hears strange radio signals while looking at the fire. 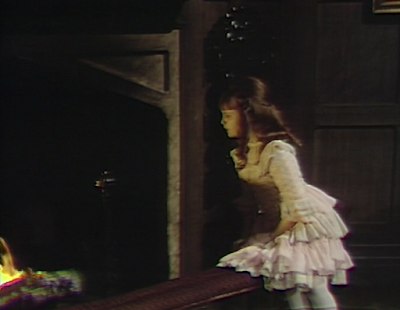 Barnabas says he's glad Edward is reconsidering sending the children away. He leaves, and Edward hears Nora in the drawing room. She runs out and tells him she could hear something in the fire. He tells her that it's only her imagination. He drags her back into the drawing room and forces her to look into the fire. She screams, saying she can see her mother's face in the flames. Edward is shocked. 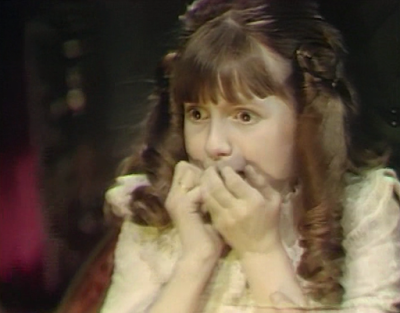 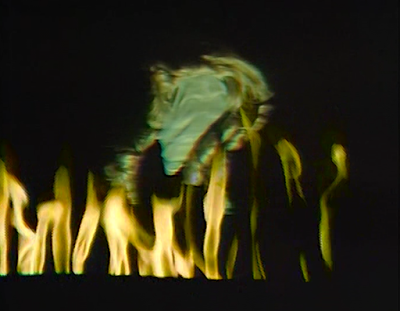 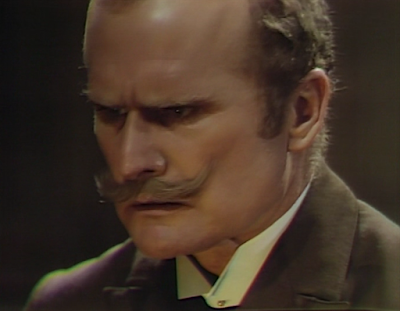 John: I must admit. Barnabas comes across like a part-time vampire. I had almost forgotten his affliction until he bit Charity, and then within minutes of that he appeared to be back to his normal, non-vampiric self.

Christine: It seems that Charity is all ready to be the good and faithful servant to him that Carolyn once was.

John: Aha! So all the puzzle pieces are falling into place! Laura the Phoenix ran out after Quentin, for some unknown reason, Quentin ditched Jenny, who Edward took responsibility for. And now we're prepped for a grand homecoming!

Christine: I think it's fair to assume she ran off to Egypt to have a fling with him, and it should be interesting to hear the tales of adventure she'll have to share from her time spent in Alexandria.

John: Curious that Laura would communicate with Nora through hieroglyphics, when clearly fire is the most reliable form of communication! Interesting in that they didn't have the actress on set today, so we got an indistinct image in the fire. I'm curious to see if we'll see the same actress resuming the role of Laura in 1897...

Christine: It was difficult to tell with the undulating effect, but I do believe the bewigged wide-eyed skull has made another fireplace appearance.
Posted by John Scoleri at 6:00 AM