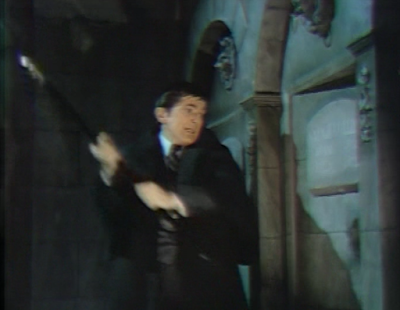 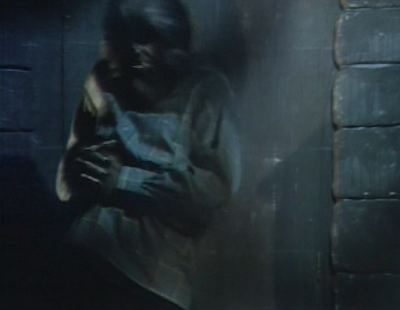 Amy comes into Maggie's room. Maggie says she hasn't been able to sleep because she's worried about David. She tells Amy that she's the only one that can help them find David. She says that she knows she knows where David is. Amy denies it. Maggie then accuses her of leading her to Collinwood because Quentin wanted her to. Amy denies knowing who Quentin is. Maggie tells her that Quentin may kill David. She asks Amy to take them to where he has David. 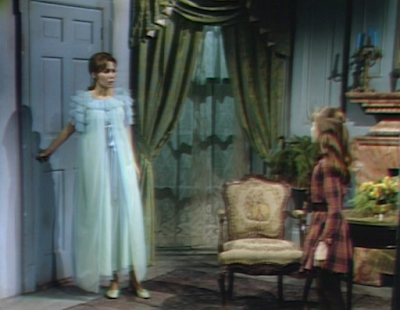 As Julia walks in, Amy says she'd like to help David, but if she says anything more, Quentin will do something terrible to Chris. Julia asks her about the connection between Quentin and Chris. Amy says she's afraid, and reluctantly leaves Maggie's room with Julia. Maggie falls asleep instantly and begins to dream. 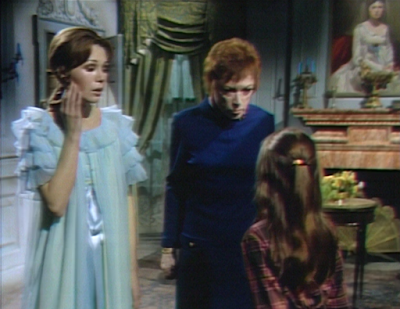 Maggie dreams she's in the storage room in the West Wing of the main house. She sees Mr. Juggins, and then the secret access to Quentin's room. She crawls through and hears his music playing. Quentin appears with the dress in his hands. She asks him what he wants with her. He hands her the dress. She tells him that it's not hers. He comes closer and puts his arms around her, and leans in to kiss her. He then begins to laugh. 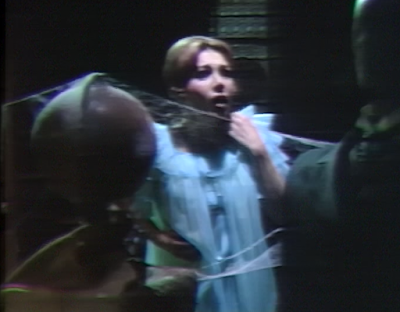 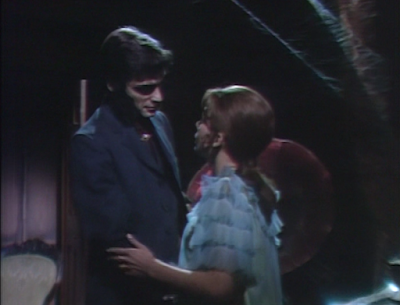 Maggie wakes up and calls for Julia. She tells her about her dream. She says she saw the room he took her to, but she can't recall where it was. Maggie says she remembered a dark staircase, and Mrs. Stoddard's room. Julia asks her to try and remember the night at Collinwood. She describes seeing Quentin in the drawing room, and then going up the old staircase into Mrs. Stoddard's room, which she thought was hers. She says she was then drawn someplace else, down a long corridor in the West Wing, alone. She says she went into a room and saw the figure of a man, but it was Mr. Juggins. She realizes where she was, and says she must go to Collinwood, because she knows where David is. Julia says she'll find Barnabas. Little do they know that Amy is listening outside her door. 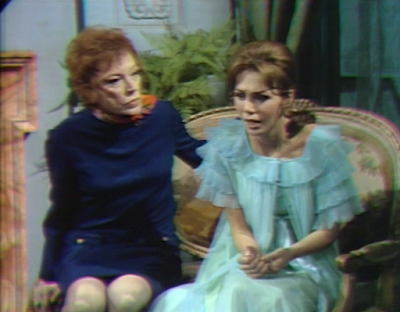 Barnabas returns to the mausoleum. He hears the werewolf growl inside the secret room. Julia appears and tells him that Maggie knows where David is. They leave the mausoleum, which Barnabas appears to lock.

Amy goes to the storage room in the old house and works on the panel to Quentin's room.

Barnabas and Julia look for Maggie, but don't find her in her room. She comes in and says she's looking for Amy, who has disappeared. Julia says she'll look for her, and Maggie describes to Barnabas where she thinks David is. 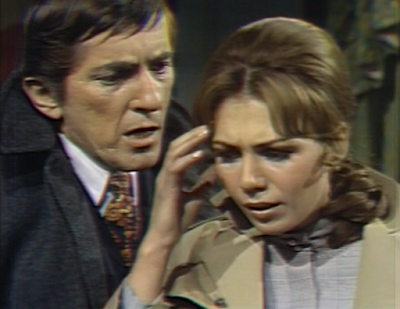 Amy gets into Quentin's room and calls for David. She says she has something important to tell him. Quentin appears and puts his hand on her shoulder. She tells him that Maggie and Barnabas are on their way. 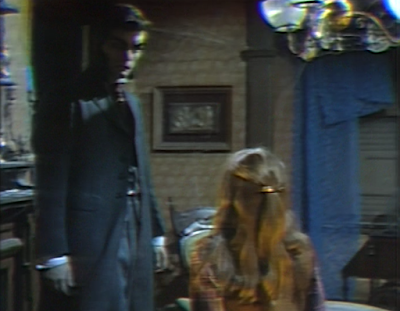 Barnabas and Maggie arrive at the main house and head towards the West Wing.

Amy explains that she didn't tell them where he was, and that it was Maggie in a dream. Quentin places his hand on her shoulder and she freezes. 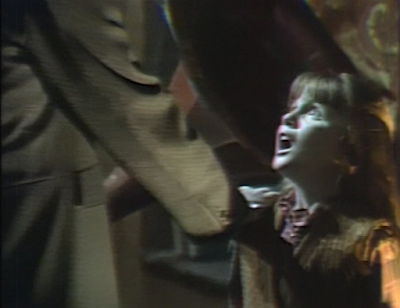 In the storage room, Barnabas says he's going to rip out the remaining panels to Quentin's room. 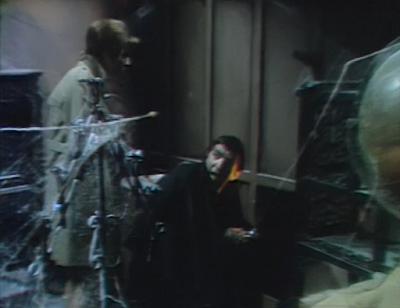 Christine: That certainly was a switcheroo. I'm surprised the silver wolf's head on Barnabas' cane hasn't been bent out of shape by all the thrashings he's given with it.

John: The floaty-head Quentin was an odd choice as Maggie fell into her dream sequence.

Christine: It may not have been the floaty-head in itself that was odd, but the fact that it was a psychedelic floaty-head, with the effect removing his characteristic mutton chops that made it seem particularly strange. I wonder about the significance of Maggie knowing who Mr. Juggins is. 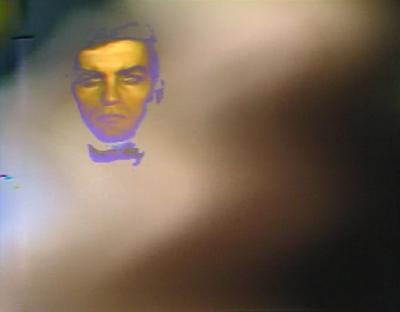 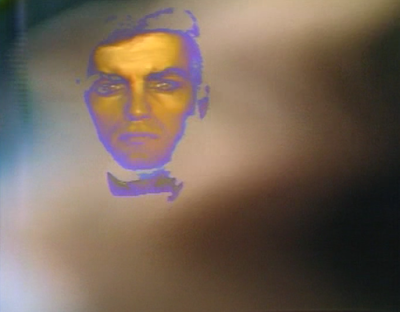 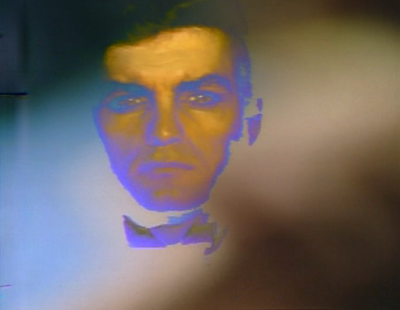 John: Doh! Maggie has a ghostly me-too moment with Quentin! Once again, we're left wondering what Maggie means to Quentin; whether she's a substitute for Beth, or something else..

Christine: That was pretty disturbing, especially after he had previously attempted to strangle her. I thought it was interesting that Josette's room was such a focal point in this episode, with her portrait being featured in today's end credits. I'm wondering if there's some parallel being drawn between Barnabas trying to make her into Josette and the possibility that Quentin may now be trying to make her his Beth. 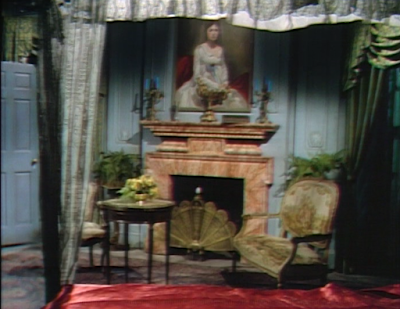 This was a good one, I remember. For me it was pretty easy to tell that Maggie found more powers of a psychic and intuitive nature being in Josette's room.