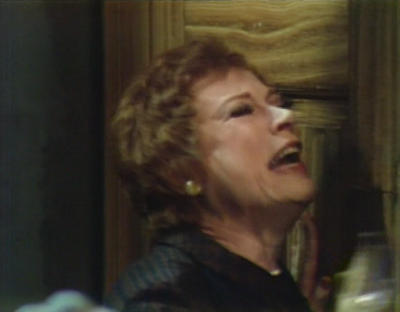 In the basement of Collinwood, Julia looks through books and papers. In a book of photos, she finds a picture of the woman who led her to Chris, dated 1897. She goes to leave the room and the door slams shut in front of her. The lights go out and wind billows in through an open window. She asks who's in the room with her. She asks what they want of her, and begs to be let out. She tries the door but it won't budge. She pounds on it and calls for help. She hears Barnabas say he's coming, and the wind stops. Barnabas comes in and asks her what's wrong. She tells him that someone else is in the room, but he sees no one. She explains that she found a picture of the woman who led them to Chris dated 1897. She goes to the album to find the photo is missing. 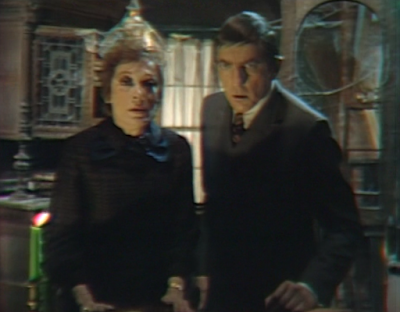 Chris and Carolyn return to Collinwood, and she offers him a drink. She points out that he seems so happy to have forgotten about his deep, dark secret and he snaps at her. He apologizes, and she suggests she ruined the mood. He kisses her, and she asks if it would be possible for every night to be like tonight. She says if she knew what his hang-up was, she might be able to help him. She asks him if he's married. He laughs, and tells her that he's never been married. She asks his opinion on marriage, wondering if there's hope for them in the future. He says he intends to be married as soon as he's able. 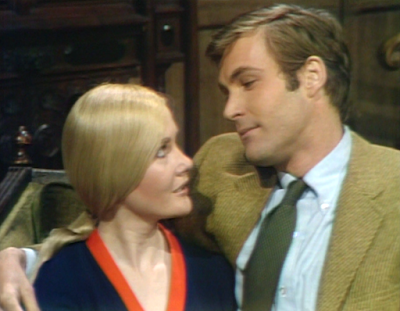 Chris returns to the cottage and as he starts to get undressed, he is overcome with pain. 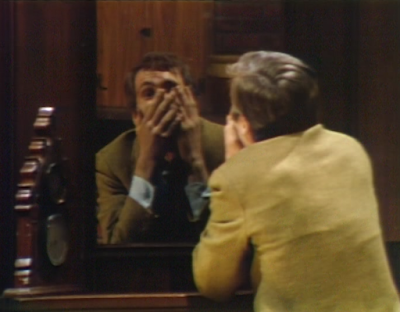 Barnabas fixes Julia a brandy. She says she's sure the woman in the photo was the one who led them to Chris' cottage. She tells him they're dealing with a ghost. Barnabas says the photo would have helped them, so it must have been taken by the opposing spirit. He wonders what they're after. The phone rings, and it's Chris telling Barnabas to come right over. 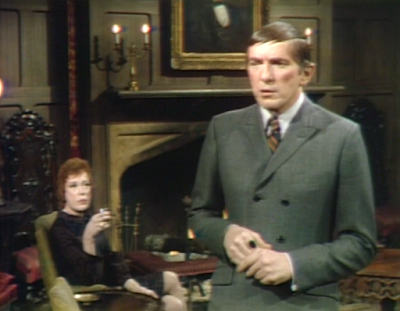 Chris struggles with pain as Barnabas and Julia arrive. He says he feels the pain of the transformation, and Barnabas points out there's no moon. Barnabas says he'll take Julia's car and drive him to the mausoleum before he changes. Julia waits in the cottage. 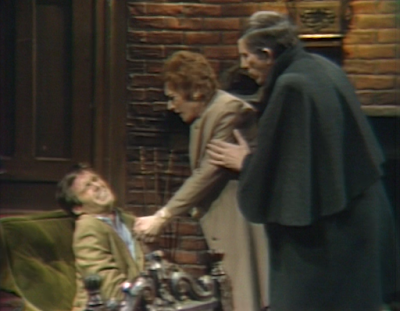 There's a knock on the door at Collinwood, and Carolyn runs downstairs to find Jeff Clark. She calls him by that name, and he says his name is Ned Stuart. He comes in, and she asks what he wants. He says he's looking for Chris Jennings. She asks why he wants to see him. He says they're old friends from out west. He asks if Chris is there, and she says no. He asks where he is, and they trade questions about motives. Ned says he just wanted to renew an old acquaintance, and he'd be happy to wait for Chris. Carolyn says he lives in the caretaker's cottage. Ned asks her where it is, so he can surprise him. She tells him how to get there, and he heads out. Carolyn picks up the phone and calls the cottage. 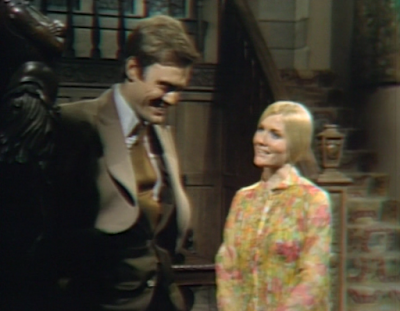 Julia considers answering the phone, and then does not. She sits by the fire. Barnabas returns and says they made it with a moment to spare. He says this latest development makes it impossible for them to work. There's a knock at the door and Barnabas is shocked. The man comes in, introducing himself as Ned Stuart. He asks for Chris. Barnabas says that he went out, and may be gone for several hours. Ned says he'll wait. He introduces himself to Barnabas and Julia, and asks Julia if she's a psychiatrist. Barnabas asks if there's anything they can help him with. Ned asks why everyone is so protective of Chris. 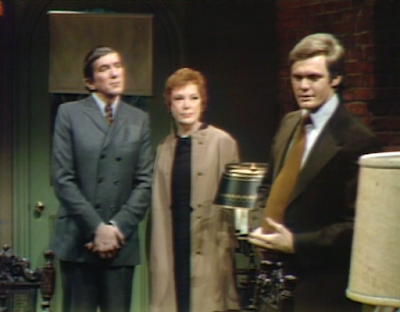 Barnabas asks why his questions can't wait until morning. He then proceeds to grill Ned, asking where he's from. Ned says he's not surprised Chris didn't mention him, or his sister, to whom Chris was engaged to be married. Julia asks if the engagement was broken off, and he says that one day Jennings disappeared, and his sister was in no condition to tell him what happened. Julia asks if she's dead, and Ned says that's would be a logical conclusion. 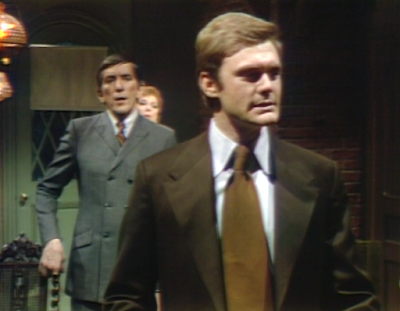 John: So we're left to believe that Quentin's ghost, on David Selby's day off, locked Julia in the basement, swiped the photo of Beth, and then flittered away.

Christine: I'm not sure what the point was to removing it, since Julia had already seen the photo.

John: Ned? Are you kidding me? In a world where descendants all look alike, Peter Bradford, Jeff Clark and now Ned Stuart appear to be dead ringers with no familial connection whatsoever.

Christine: That is what makes these characters the strangest of all. That, and the fact that nobody is as freaked out as they should be that Jeff Clark has a body double, or that all the lookalikes are impulsive, aggressive louts. Peter Bradford was supposed to have inhabited Jeff Clark's body. I wonder if Ned Stuart took up residence in Jeff Clark's body once Bradford left it, or if it's the other way around.

John: It was pretty obvious that Ned wasn't looking for Chris to relieve old college memories... so it seems like a logical conclusion that he has tracked him down to get revenge for what he likely assumes Chris did to his sister. Of course, the writers might be playing a game, getting us to think that Ned's sister was wolf-chow, only to find out tomorrow that Julia's 'logical conclusion' didn't happen to be true...

Christine: Since he said his sister was in no condition to tell what happened to her fiancé, it could be that she ended up in crazy town like Joe Haskell, especially considering Ned's interest in Julia's experience with psychiatry.
Posted by John Scoleri at 6:00 AM

The whole Jeff Clark lookalike thing bugged me too. The least they could've done was to have him sport a mustache or maybe even dyed his hair. Heck, even the Cassandra wig might have helped!

They've made more of an effort redressing our favorite skeletons every time they show up on the show! But to be fair, the skeletons tend to give a more reliable, nuanced performance. ;)

I think this is the point where they start to not go out of the way to recognize appearances and go through the whole "aren't you so and so?" speech. That did get tiring after a while.