Chris and Julia return to Collinwood. Julia tells him that Sabrina's condition hasn't changed, and she can't identify him because she can't speak. He tells her she used to be young and beautiful, and now she's a vegetable. She says they're trying to help him, and he says he can't be helped and runs out. 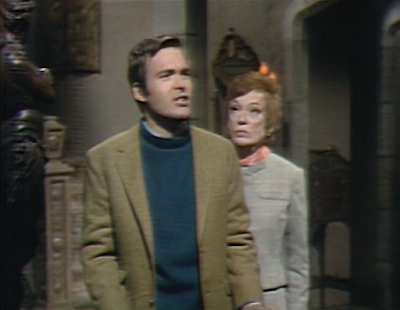 Stokes comes out of the drawing room and asks what's wrong with Jennings. Julia tells him he's having problems. He points out how that tells him nothing, as she surely intended. Stokes says he needs Julia's help to exorcise the ghosts from the house. He says he will attend the ritual outside the house, and he needs her inside the house. As they talk, Stokes hears something and walks up to the secret panel and opens it to show David standing behind it. 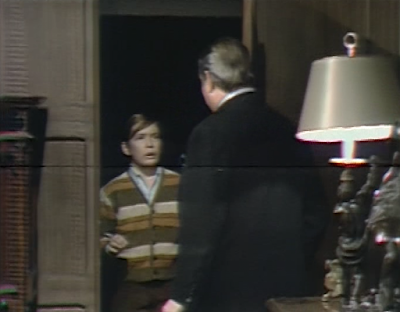 Stokes says it's time for them to talk, and David tries to get away. Stokes tells him that he knows about everything that has happened to him. David denies that anything has happened to him, and Stokes asks him to sit down. He asks if David knows what possession is. David says ownership. Stokes uses a metaphor of possessing something like a pencil, which he can do whatever he wishes with. And if he's unhappy with it, he can break it. Stokes says he can help him. 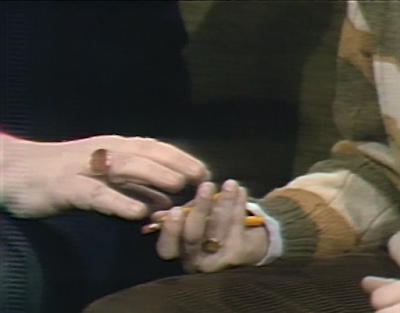 David is reluctant to say anything. Stokes gets up and asks if the man is in the room. He says he doesn't know his name, but David does. He says he's watching and listening to him, and asks him where he is. Stokes tells David he has the will to resist him. 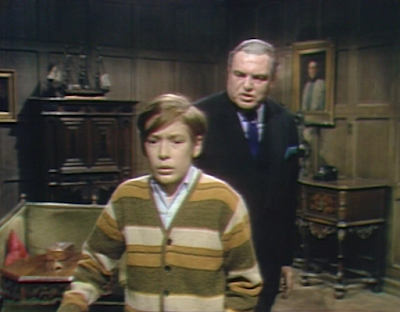 David screams, "Leave me alone!" Stokes asks who he's referring to. Stokes tells him he's standing by the window and David turns and starts to apologize, realizing that Stokes tricked him. Stokes apologizes, but says that right now he's only possessed when he's needed, but in time he will possess him permanently, and David will cease to exist. 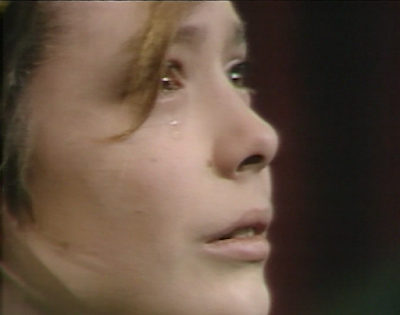 Carolyn is in the garden when Chris passes by. He tells her he needs to leave Collinsport. He says he has to go, and she is part of the reason. She tells him not to tell her that he loves her, but he does. She says she loves him, too. He asks her to forgive him. She runs back to the house. 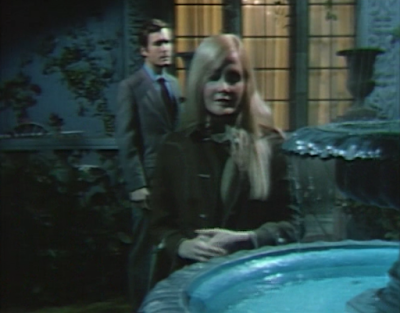 Julia appears and asks him what he thinks he'll accomplish by running away. She says he needs to let them help him. She adds that he must stay for Amy's sake. She says David and Amy are possessed by spirits in the house, and the spirits seem to be aware of the curse that he is afflicted with. Chris agrees to stay. 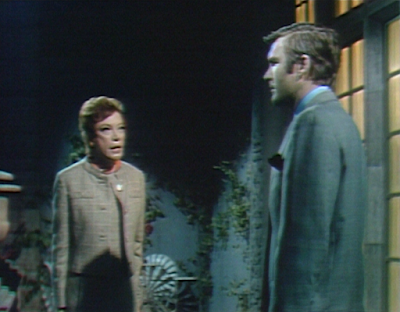 Stokes finds Carolyn in the drawing room, crying. He asks if anything's wrong, and she says no. He asks her to get David, and she goes upstairs. Julia comes back in, and he tells her that they must keep an eye on David, and ensure he stays in the room. He says that she may know when the exorcism is over based on a change in him. Carolyn comes down with a reluctant David, and they begin to hear music. The lights go out and a window swings open. Stokes says it's time, and goes outside. Julia has Carolyn sit next to David and stands behind him. David seems worried, and then calm. 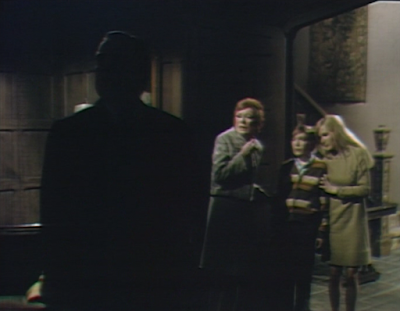 Stokes stands in the garden with a stick, and tells the spirits to leave Collinwood.

David says he's got to get out and tries to run away, but Julia and Carolyn stop him. He says it's 'his' house, and they can't scare him away. Carolyn says she can't bear the music much longer. David struggles in their grasp. 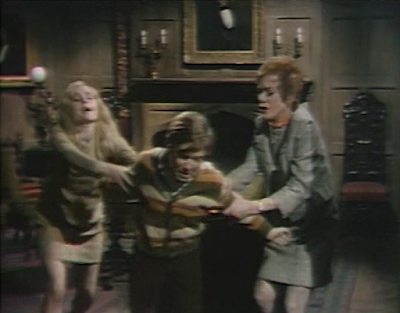 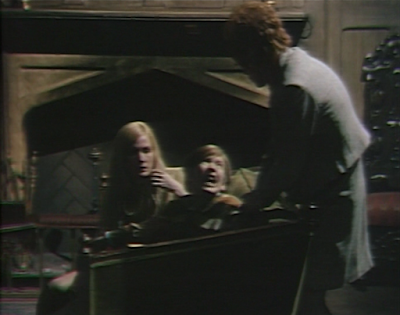 Stokes continues his incantation, stick pointed at the house.

David passes out, and Julia says she thinks he's gone into a trance. Carolyn is worried, but Julia says it's expected. The music stops and the lights come back on. David stirs and asks what's going on. Julia asks him how he feels and he says he's fine. Stokes comes back in, and Julia says David's in a daze, but appears alright. Stokes tells him that if he's succeeded, David will be fine. Julia is convinced that he did. Stokes says he's spending the night, just to be sure, and goes up to his room. 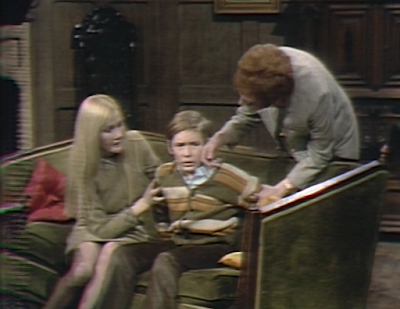 At midnight, Stokes paces in his room with an unlit cigarette dangling from the corner of his mouth. He walks up to a mirror and sees Quentin, laughing at him. He then hears fire burning and he turns to see the curtains are on fire. He tries the door but is trapped in the room. 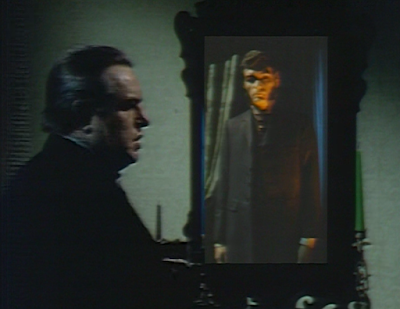 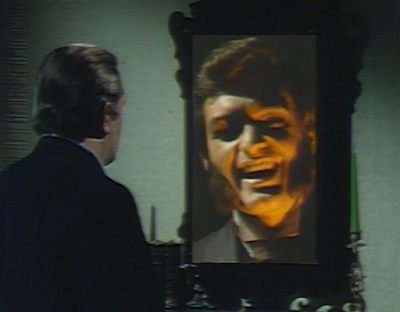 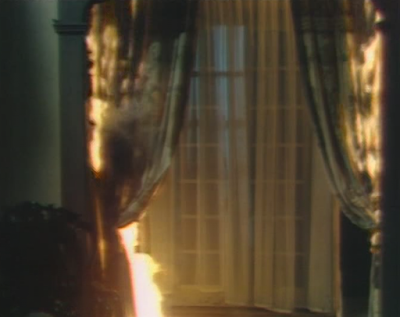 John: I like how Chris pronounces 'vegetable' when referring to Sabrina!

Christine: It somehow seems worse to be a veg-uh-tuh-ble.

John: I think Stokes got his exorcism and divining textbooks mixed up. 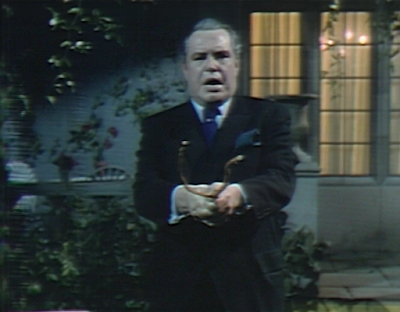 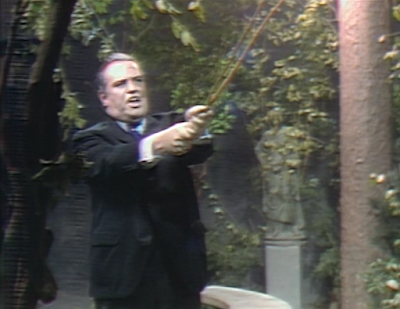 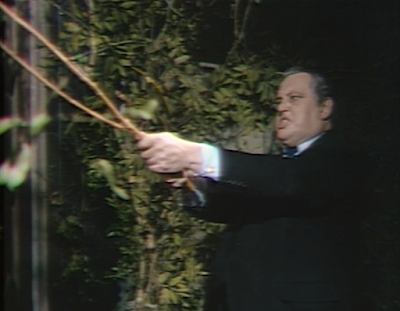 Christine: It's quite dynamic to see him exorcising from multiple angles. He seems to adhere to the Reverend Trask forked branch school of exorcism. Perhaps the exorcism didn't work because he didn't light the branch on fire like Trask did.

John: If the curtains are really on fire, and it's not just Stokes hallucinating, I would expect Collinwood is going to burn down this very night. I have to give the producers credit—they actually set the curtains on fire and not the commonly used chroma-key fire we've grown accustomed to (of course it would be more problematic for them to light actresses portraying witches or a phoenix on fire).

Christine: That looks pretty dangerous. Will Stokes be Quentin's latest victim, and will David become complete possessed by him now that the attempt to drive out his spirit has failed?
Posted by John Scoleri at 6:00 AM