Quentin laughs, and David tells him he doesn't want to play any more games with him. He adds that he doesn't want to be alone with him any more. He then tries to take it back. Quentin reaches out and touches his arm, which David says feels like it's on fire. Outside his room, Maggie hears David scream and a man laugh. When she goes into his room, she finds him alone, lying on the floor. She sees a burn on his arm. David deliriously apologizes to Quentin until he realizes he's alone with Maggie. She asks him who she heard laughing in the room with him. David tries to convince her  that he was alone in the room. She doesn't believe him. She asks him what happened, and who Quentin is. He asks who told her that, and she says that he did. Maggie asks if Quentin is the man she saw in the house, and he tells her that Quentin isn't real. Maggie asks what kind of a monster Quentin is, as she cradles a crying David. He runs off screaming that no one can help him. 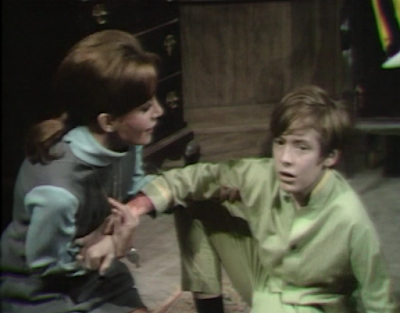 Ned arrives at Collinwood, and David opens the door to run past him. Maggie comes downstairs and asks Ned if he saw David. She runs after David, leaving Ned alone in the house. He hears Amy singing in the drawing room. She asks who he is, and he introduces himself. He asks if she's alone, and he says Maggie just ran out after her brother, David. She explains that her brother is Chris. He tells her that her brother almost married his sister. She starts out of the room and runs into Chris' arms. 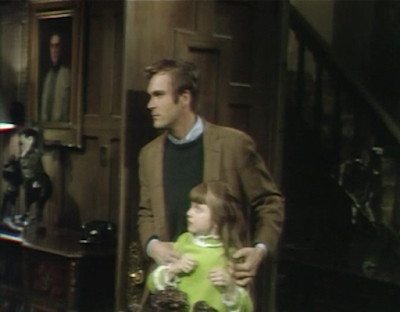 Ned tells him he was just telling her about Sabrina. Chris sends Amy upstairs, and asks what Ned wants. Chris tells him that he wishes he was more direct than he was the other night, when he tried to poison him. Ned explains that he may want to kill him, but he wants some questions answered first. Chris realizes that he wasn't the one to poison him. Ned asks what happened between he and his sister. Chris says there's no way he could convince everyone he had nothing to do with her death. Ned asks him why he's so sure that she died, and tells him that she didn't. He tells him he wants her to come see her, and that she's at the Collinsport Inn. Chris says that if she's alive after that night, then she knows... and stops. Ned asks what she knows, and then grabs Chris and tells him he's coming to see her. 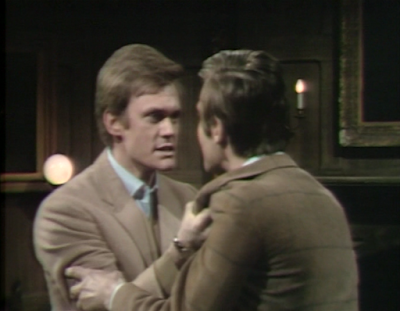 In the woods, Maggie calls for David. He runs into Amy, and he asks if Quentin sent her. She says she wanted to know why he was hiding. David tells her that he can never go back to the house again. He tells her that Quentin was angry at him. He says Quentin's not the friend they thought he was. He tells her he wants them to drive everyone else away from the house. Then he shows her the burn on his arm. 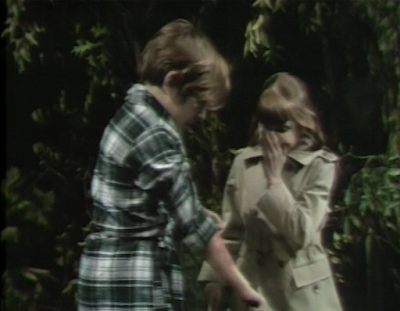 David says that they have to tell Maggie. Amy's afraid to tell her. They turn to go to the house and run into Quentin. Amy tells David to tell him they didn't mean it. David says Quentin is going to teach them a lesson that they'll never forget. 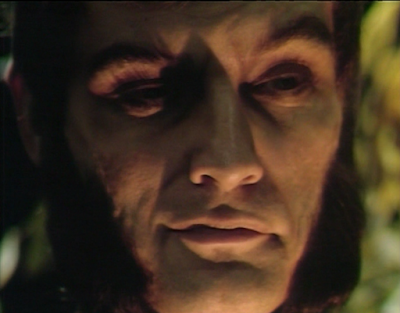 Maggie finds the kids are in the drawing room. David apologizes to her. He asks if they're alone in the house, and Maggie says that they are. Amy suggests that they play hide and seek, and she tells them that she won't do that after the last time when they went outside the house. Amy then invites her to join them playing dress up. Amy and David run upstairs to change, telling Maggie that they'll bring her a surprise 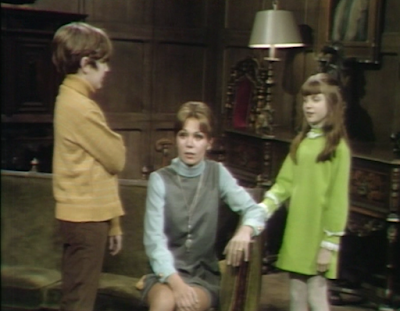 When the kids don't come down, Maggie goes upstairs to look for them. She doesn't find them in David's room. After she leaves, his door opens on its own. Downstairs, the front doors blow open. Maggie closes them, and hears a man laughing. The door at the top of the stairs opens. Maggie goes into Roger's study and calls for David and Amy. She doesn't find them, and shouts out that they're not playing hide and go seek. She hears a door close, followed by a man's laughter. She goes back into Roger's study and closes the door. She hears footsteps outside the study, and hears the kids' maniacal laughter. The doorknob turns as Maggie is terrified. David asks if she can hear them, and Amy tells her to come into the hallway so she can meet someone. David adds that the person really wants to meet her. 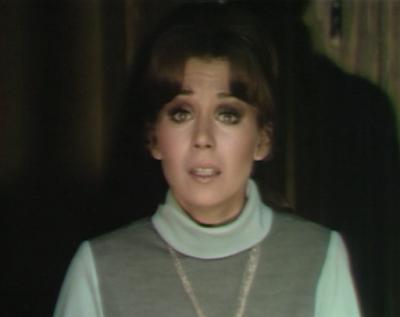 John: Didn't Quentin's interaction with David seem to come out of left field? I don't understand why his touch would burn. He has already demonstrated that he can control David without touching him, so what led to today's development?

Christine: My guess is that Quentin is gaining power through David, which might explain his newfound ability to affect him by touch and to have his sinister laughter be suddenly heard. It's pretty terrifying to see him turn on the children and cause them harm.

John: So just as predicted, Ned's sister is—SURPRISE!—alive. And she's in Collinsport. Can't wait to meet her. I assume we will find out that she's mute, or comatose, or in a state of shock since she last saw Chris...

Christine: Will Carolyn's green-eyed monster appear when she finds out?

John: It's particularly creepy when the kids are outside the door telling Maggie to come meet their friend. I just hope they don't cheap out come Monday!

Christine: I agree. Also, that insane giggling is the stuff of nightmares!
Posted by John Scoleri at 6:00 AM

That looked like a pretty severe burn on David's arm, surely bad enough to require medical attention or at LEAST a little more concern from Maggie! With Dr. Hoffman always around, you'd think she would at least take a look at it.

BTW, last night I also happened to view a Season 2 episode of The Waltons ("The Thanksgiving Story"). I noticed the name David Henesy in the end credits, so I had to review the episode and sure enough, he has a couple of quick lines of dialog directed at John Boy when he's in the University office! I've seen that episode a few times over the years and never recognized David in there before. Looking at IMDB, it was the final screen credit of his brief acting "career."