Barnabas is in the drawing room when Julia returns to Collinwood. She tells him that the autopsy showed Ezra Braithwaite died of heart failure. Barnabas says that's the same cause as Findley's death. He doesn't believe it. He tells her that someone was in the room with Braithwaite, and he was murdered. Julia asks how he knows. Barnabas tells her that he brought a ledger, and when he died, there was no sign of it. He says that Braithwaite knew who he sold the medallion to. He then tells her that the woman who led them to Chris was responsible for getting Braithwaite to the house. Barnabas suggests that the woman, and the man that Mrs. Johnson saw may be in conflict. Whatever the woman is trying to show them, the man is trying to stop her. 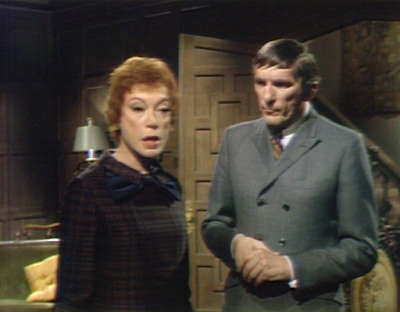 David picks up the ledger in Quentin's room, and takes it back to his room. He's interested in finding out why Quentin killed Braithwaite. He reviews the ledger from 1897 when Beth appears before him. He begs her not to tell Quentin. He then says he hates him. She points at the ledger. She nods to agree that she won't tell Quentin, and then directs David to open the ledger. He reads the entry on the pentagram. 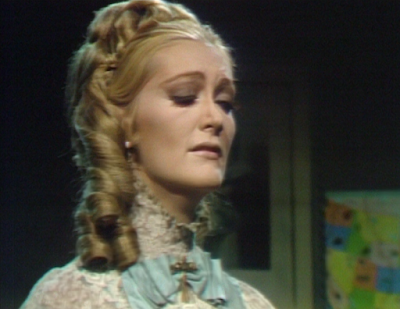 He asks her why Quentin would kill for it. He then hears Quentin's Victrola, and Beth disappears. David then admits to stealing the book because Quentin promised not to hurt Braithwaite. He apologizes to Quentin, and says he'll do anything he says. He tears the page out of the ledger. 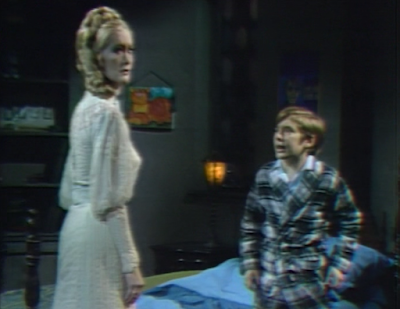 There's a knock at his door. He hides the page in his pocket, and the ledger under his pillow. He opens the door and Barnabas and Julia enter. Barnabas asks David what happened to Braithwaite's ledger. He then asks if David took it. David says Barnabas always accuses him. He says he wishes he went with his Aunt to get his father. He gets up and struggles with Barnabas when Roger comes in. David grabs his father and tells him that Barnabas hates him. Roger asks Barnabas what's going on. 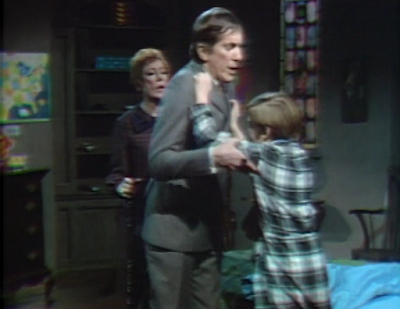 After hearing the details, Roger says he'd like to be alone with David. On his way out, he tells Barnabas that his fascination with the past has gone too far. David tells Roger he missed him. Roger points out it was not enough for him to go to the airport. He adds that David was rude to Liz. David makes up an excuse, and Roger buys it. Roger leaves and David takes the ledger from beneath his pillow. 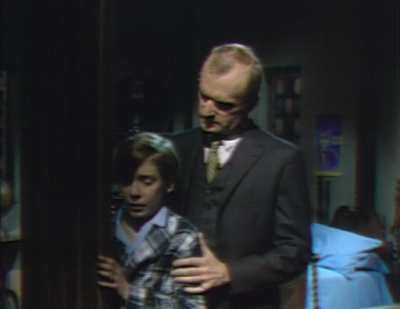 Barnabas asks Liz if she has old family receipts. Liz asks for details, and Barnabas says he'd like her to wait until he has more information. She offers to get the keys to the storage room after she looks in on David. She goes upstairs, and Julia asks him what he's looking for. He says he wants any clue, a receipt, letter or photograph from the jeweler. Roger comes downstairs and scolds Barnabas, saying he left him in charge. Barnabas tells Roger that David knows more than he's saying. Roger asks if he asked Maggie or Amy about the ledger. Roger tells him he's been reading too many bad mystery novels. He walks to the desk and picks up the ledger, asking if it's the one they are looking for. Barnabas rushes over, and Roger says he should have searched the room more carefully. Barnabas points out that a page is missing. Roger asks if David is to blame for that. 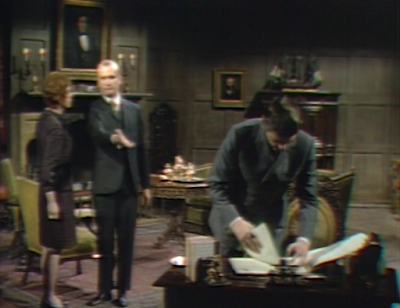 Liz comes in and offers to bring them to search the records. Roger tells him to finish with him before going off with Liz. Liz and Julia go downstairs, and Roger tells him he wants him to apologize to David. He says if he's unwilling to do that, he's no longer welcome in the house. 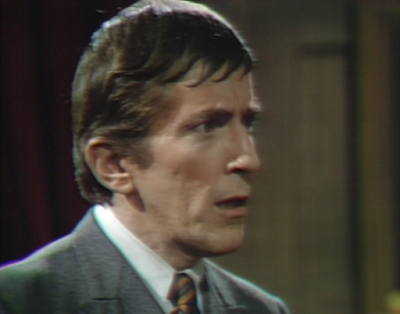 Liz shows Julia to the storage room with all the documents. She hands her the keys and asks her to lock the door when she leaves. After she goes upstairs, Julia begins to look through books and papers. In a book of photos, she finds a picture of the woman who led her to Chris, dated 1897. She goes to leave the room and the door slams shut in front of her. The lights go out and wind billows in through an open window. She asks who's in the room with her. 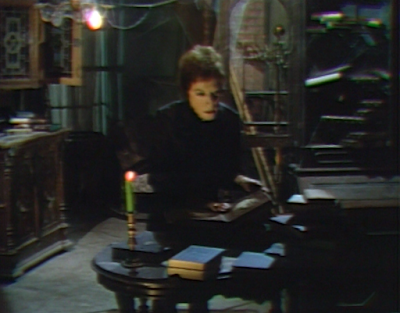 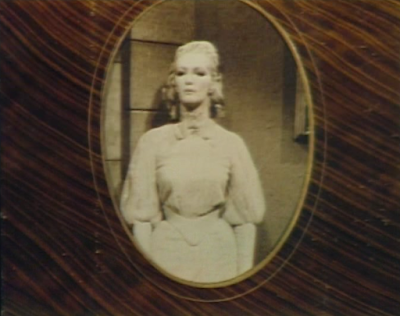 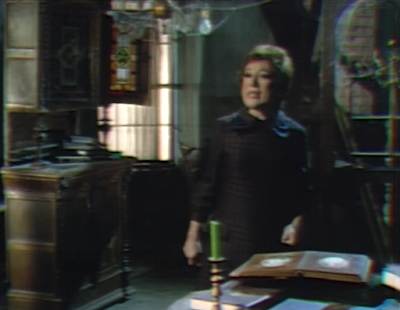 John: In all fairness, Quentin took the ledger first, but I can't believe David got away so easily with it poorly hidden under his pillow while they were all in his room looking for it.

Christine: I had to laugh when Julia described Mrs. Johnson as a repressed hysteric when there's nothing repressed about Mrs. Johnson.

John: Roger didn't mean to criticize David? He wants them to be better friends? Is this the launch of an Invasion of the Body Snatchers storyline? 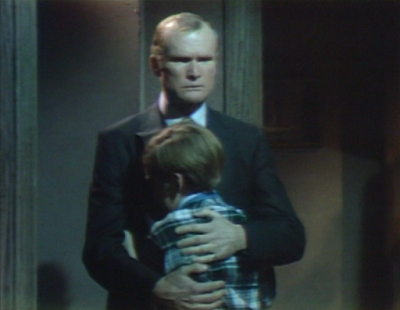 Christine: It certainly might explain why no one could reach him to inform him that Liz had died during his trip had he been growing inside a pod.

John: Roger throws down the gauntlet, threatening Barnabas based on the word of his son—the son who tried to kill him—multiple times! Even if he believed David, I can't believe him being so unwilling to listen to Barnabas, who he has always deferred to. I guess he finally gave up on Barnabas helping him close some lucrative business deal...

Christine: I expect there will be an apology from Barnabas to David tomorrow. The photo of Beth seems unusual, not only because she's by herself against a casual background, but because ladies in the Victorian era did not usually wear so much eye makeup. 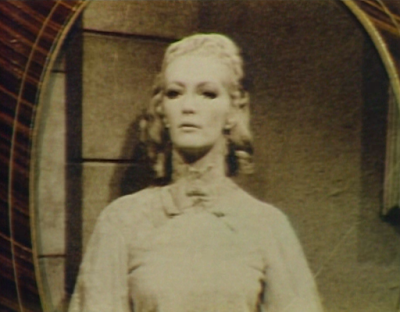