At midnight, Stokes walks up to a mirror and sees Quentin, laughing at him. He then hears fire burning and he turns to see the curtains are on fire. He tries the door but is trapped in the room. He takes a candlestick and breaks the mirror. He turns back to the window and the drapes are back to normal. 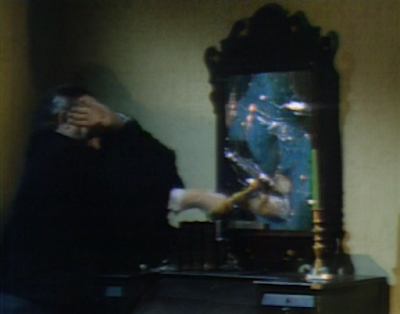 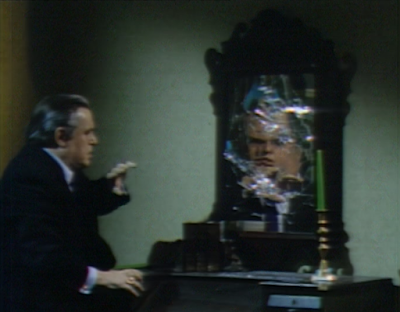 Outside his room, Roger asks if he's alright. Stokes opens the door and Roger comes in. He says he heard laughter and a crash. Stokes says he just received an ultimatum from a ghost. Roger tells him to tell Liz that the ghost is gone. Stokes says he can't, because it's too dangerous. Roger threatens to keep him in his room unless he agrees to tell them it's over. 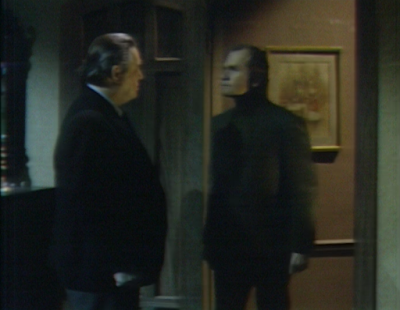 David stops by the drawing room to see Liz before going to bed. He says he has to get up early to do something, but he won't tell her what. She suggests that he always knew there were spirits in the house. She asks him what secrets he's hiding. David says he wants to make sure that he never comes back. He tells her that he and Amy will take care of what to do. Liz says it's already been taken care of when they start to hear music playing. Liz runs out to get Stokes, and the doors to the drawing room slam shut. Quentin appears before David. David calls for help, and Quentin raises his hand. David loses his ability to speak. 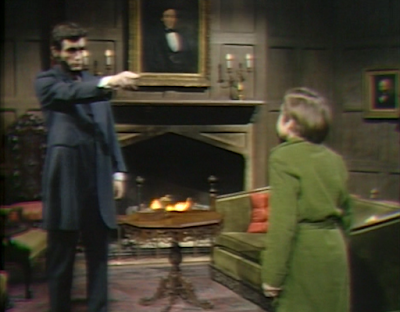 Liz goes upstairs to get Stokes.

David tells Barnabas that the man in his dreams can't get him in the old house. Roger knocks on the door and asks if David is there. He tries to take David back to Collinwood, and blames Barnabas and Stokes for upsetting David. David asks his father if he can stay at the old house. Roger reluctantly agrees. He tells David to go straight to bed, and return to Collinwood in time for breakfast. He leaves, and David tells Barnabas that he'd like to go to bed. 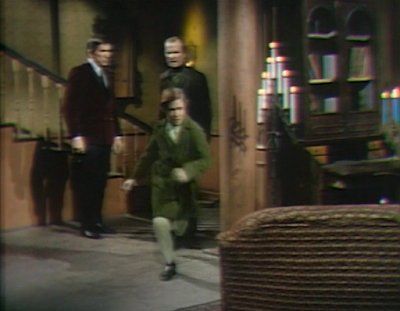 Barnabas asks him who drove him out of Collinwood. He offers to tell if he can stay in the old house forever. He tells Barnabas that it started as a game. Quentin's ghost appears outside the window. David continues, and says he can't tell him because he'll be punished. He runs upstairs. 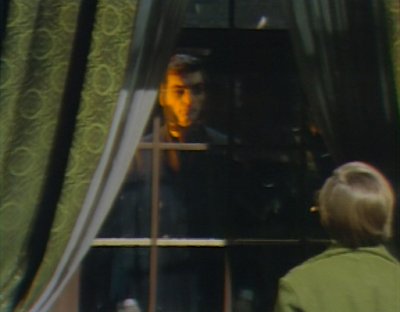 Liz says she has no problem with David staying at the old house. Stokes says he's worried about anyone staying in the house. Roger asks if he should burn the house when they go. Stokes tells Roger that there have already been two mysterious deaths in the house, and there will be more. Stokes tells Liz to go to Barnabas. She says that they'll all go to the old house, and if it's inconvenient to Barnabas, they'll go into town. 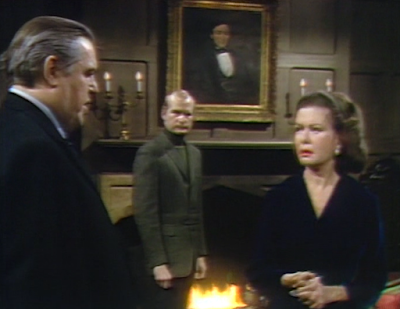 Roger refuses to go, and Stokes leaves him alone in the drawing room, where he pours himself a drink. He is overtaken with the feeling that he's being watched. He then looks out the window to see if he sees anyone. The doors to the drawing room close on their own. He looks around the room and asks who's there with him. Quentin appears before him. 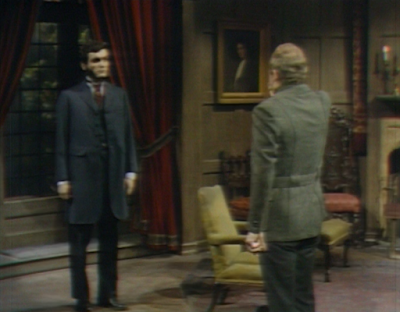 At 2am, Liz and Stokes come downstairs. She asks where Roger is, and Stokes says he left him in the drawing room. She goes in and finds him, looking pale. He tells them that he saw him. He says Stokes was right. Roger agrees to go with them. 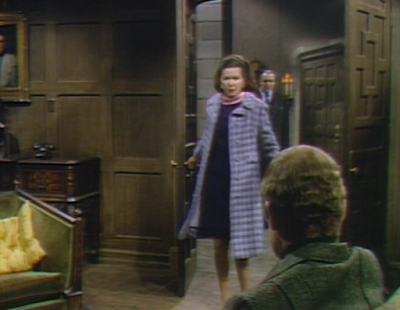 Roger apologizes for doubting Liz. As they leave, Roger calls back into the house that they will be back. 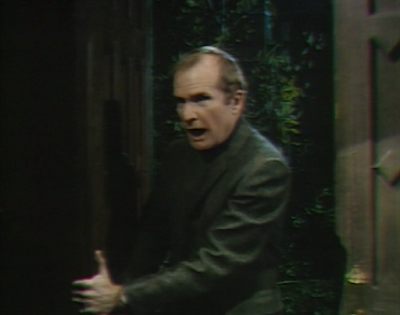 After he closes the door, Quentin laughs, and his music plays. As the music fills the empty house, Quentin stands at the top of the stairs, laughing as he celebrates his victory. 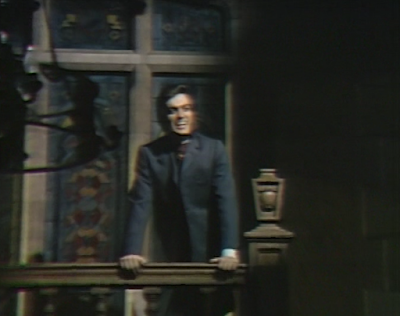 John: I had to laugh when Barnabas told Roger that under the circumstances, he should ask David one question at a time. Because normally, an endless litany of questions would be appropriate...

Christine: That was pretty funny. It's always a delight to see the condescending look on Roger's face so quickly erased when forced to confront evidence of the supernatural. 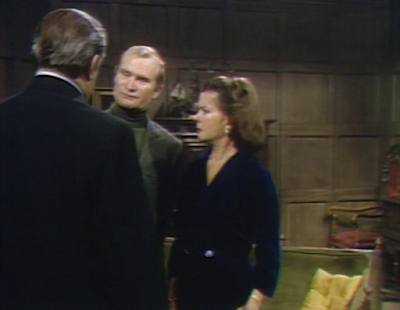 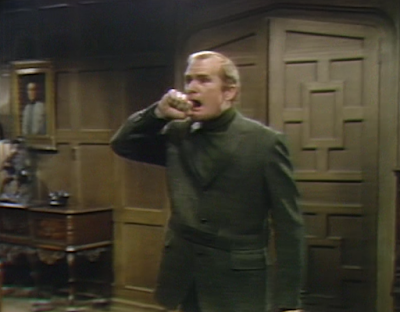 John: Liz says she was going to wake everyone to take them to the old house, but since Amy, Maggie and Mrs. Johnson all have the day off, they appear to be left behind.

Christine: Too bad Beth is also off site, or we might expect her to do something to counter Quentin's nefarious plan.

John: The final scenes almost play out like a finale to the show in which the evil Quentin wins. His music fills every room of Collinwood, which he now has to himself. 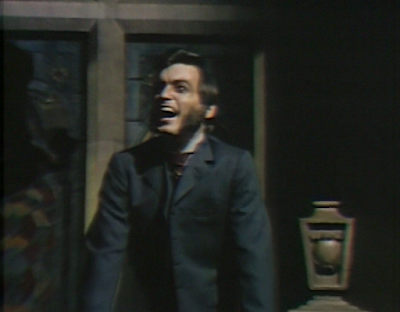 Christine: I thought that was a very frightening and powerful ending. How will the Collins family reclaim their home? Quentin's ghost is one of the more terrifying monsters we've seen on the show. Like Angelique, he is able to silence and control others; giving them terrifying visions, causing them pain and suffering, or death, if he feels like it, and he has no qualms about hurting children. He can appear anywhere on the Collinwood estate, he can't be killed, and has so far resisted exorcism. One can only imagine what he intends to do while home alone in the Great House. Will he continue to occupy it, or burn it down to the ground? 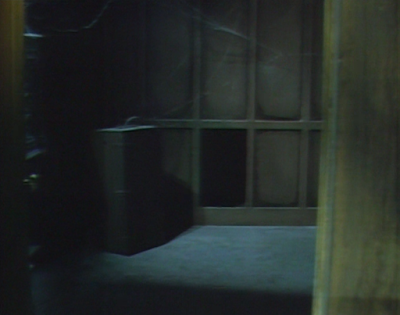 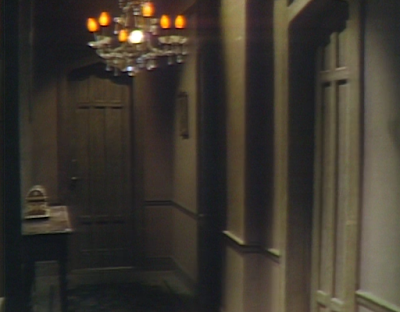 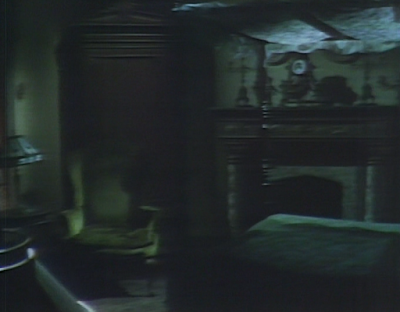 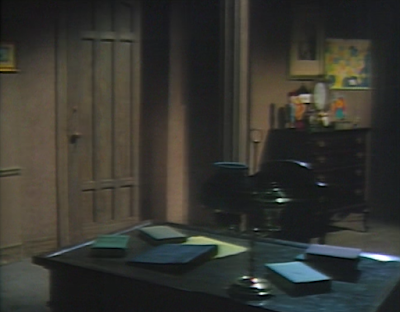 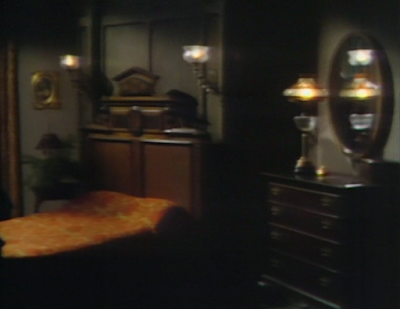 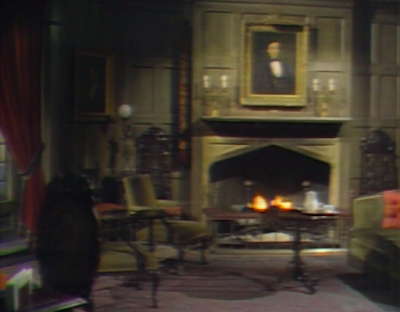