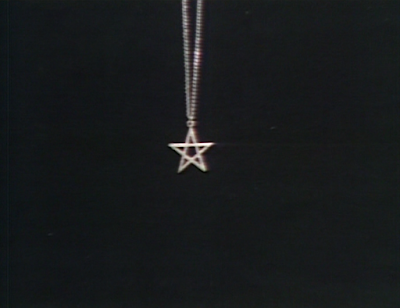 Braithwaite calls Collinwood and David answers. He asks to speak to Barnabas. He says he has the information he asked for, and he offers to bring it to the house on his way home. Quentin's ghost takes the phone from David and hears Braithwaite describe how he has the ledger indicating who ordered the medallion. He says it was one of the first pieces he made himself. Quentin hangs up the phone and David says he has no right to do that. He says he has to tell Barnabas, but Quentin approaches and David backs up the stairs. 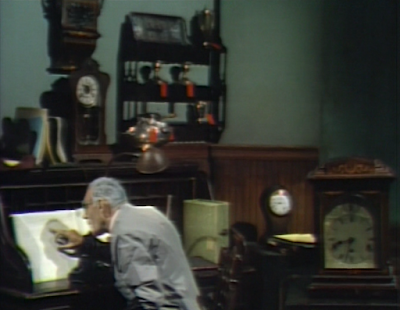 In the drawing room, David asks Quentin to promise he's not going to do anything bad. Amy hears them talking, and comes in. 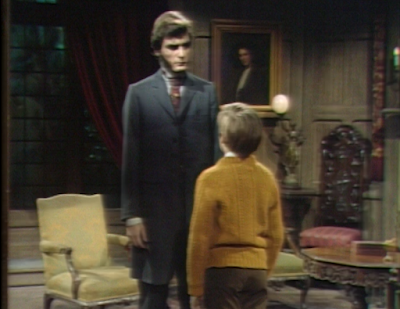 She smiles when she sees Quentin. David asks what she's doing downstairs. Quentin disappears, and Amy asks David what Quentin wants him to do. Amy asks if he's planning something against Chris, and David says he isn't. Amy says Quentin is in the room listening to them, and runs out. David follows her into the foyer. She says she doesn't think it's fun to play the game anymore. David says they'll just make sure he doesn't do anything bad. 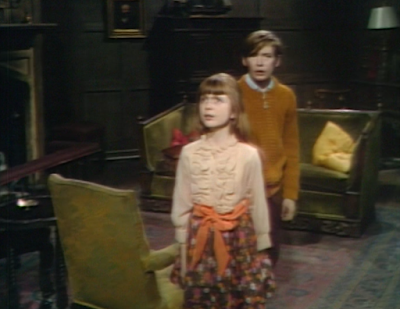 Liz comes downstairs and says that she just got a telegram, and they're going to the Portland airport to meet his father. Liz invites Amy to join them. The two kids are stunned. David says they had plans, and that he has to study for a test. He tells her he doesn't want to go. She probes, but he says he can't go. Liz asks if he's lying about the test. He then says he has a stomach ache, a sore throat, and a fever. She feels his forehead, and says she doesn't feel it. Amy says he can tell her, but he runs upstairs. 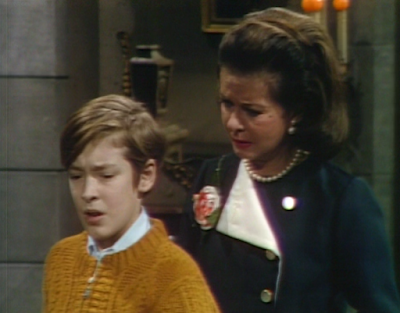 Liz asks Amy if David is in some kind of trouble, and she says she doesn't know what she means. Liz gives up, and leaves to pick up Roger. 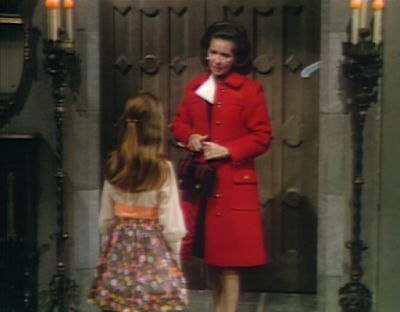 Amy tells David that she's gone. She says they have to be careful if they plan on playing the game. She asks him what he thinks Quentin really wants. David says he doesn't know why he didn't want him to tell Barnabas that Mr. Braithwaite was coming until after he gets here. Amy says she wishes they never found Quentin's room. David says he used to like him. 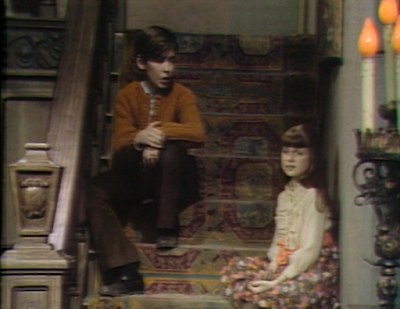 Amy finds Barnabas in Roger's room. He says he's preparing to return to the old house now that Roger is coming home. He tells her that he'll still be around, and she can still come to him. She asks if he's ever been afraid of anyone. He says yes, and asks who she's afraid of. She says it's just a question. She tells him she wishes she could go to the old house with him, or stay with Chris. 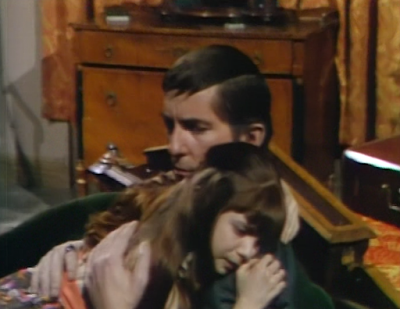 Braithwaite knocks on the front door. David answers and lets him in. He introduces himself to David, who leads him into the drawing room. Braithwaite admires the silver candlestick that his father fashioned. He asks David to get Barnabas for him. David leaves him in the drawing room and goes upstairs. 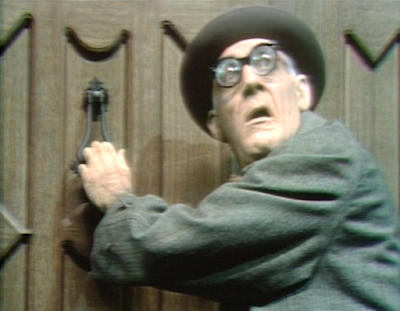 Braithwaite examines every piece of silver in the drawing room, commenting on one that he thinks must have been picked up in the city. Quentin's ghost enters through the secret door as Braithwaite reviews his ledger while waiting for Barnabas. He looks up and sees Quentin, saying he must be Barnabas' friend. Quentin nods. He says he has the information on the pentagram. He says it's the first piece he made when he was just 15 years old. He reads, "One starred medallion, engraved with the quotation, 'To guard you from the wrath of Cerebus,' ordered by Ms. Beth Chavez, and billed to the account of Quentin Collins." Braithwaite asks Quentin his name, and then says he knows him. Quentin nods. Braithwaite says that he's Quentin Collins—but then realizes that Quentin's dead. Quentin smiles and leans in towards him. 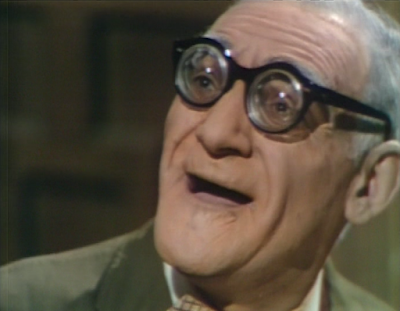 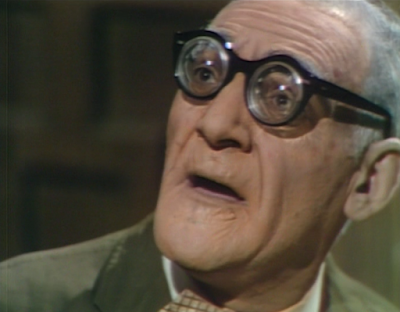 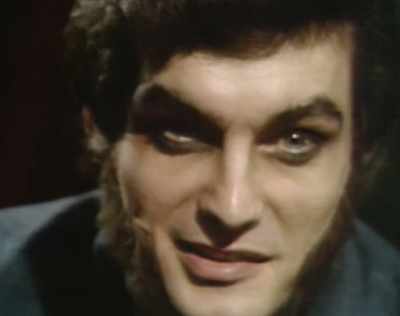 David tells Barnabas that Mr. Braithwaite is downstairs waiting for him. They go downstairs.

Quentin flips through the ledger before leaving the drawing room through the secret door.

Barnabas sees Braithwaite sitting in the chair in the drawing room. He touches his shoulder and Braithwaite falls over, dead. David screams that he can't be dead, and Barnabas sends him to get Julia. 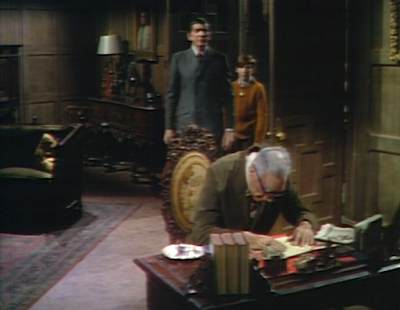 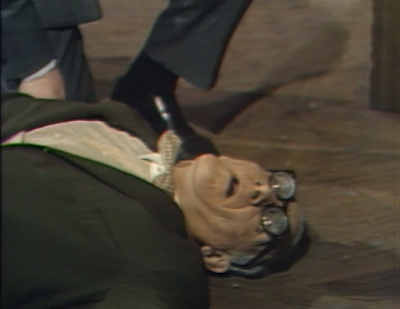 John: When exactly did Barnabas move into Roger's room? That's pretty weird. I guess Willie has taken over run of the old house?

Christine: I also thought that was strange. I wonder why Mrs. Johnson didn't make up the guest bedroom for him.

John: I love Braithwaite's See-Things-glasses, particularly when we get his POV of David while wearing them. 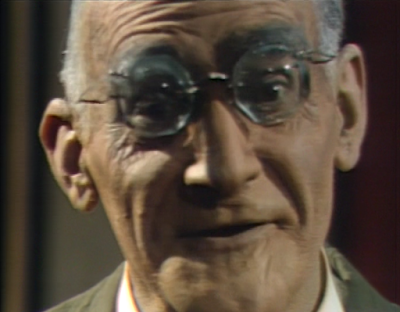 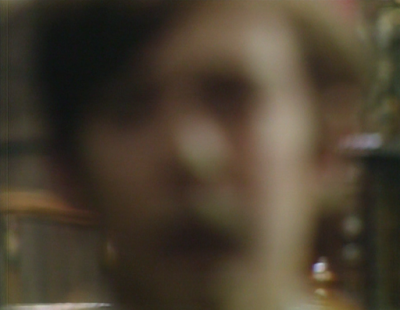 Christine: They had to make sure the kids would understand why Old Man Braithwaite didn't recognize Quentin Collins right away.

John: Damn! Ezra Braithwaite, we hardly knew ya! But allow me to reiterate that Abe Vigoda has been the most welcome surprise guest star on the show to date. Such a great, albeit brief, performance from the late, great Abe Vigoda, who at not quite 48 years old, was younger than I am now as I write this!

Christine: His performance was thoroughly entertaining! I love the way he examined the silver and muttered to himself. 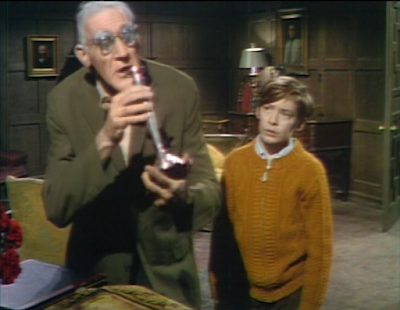 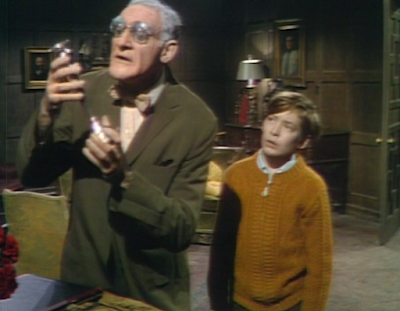 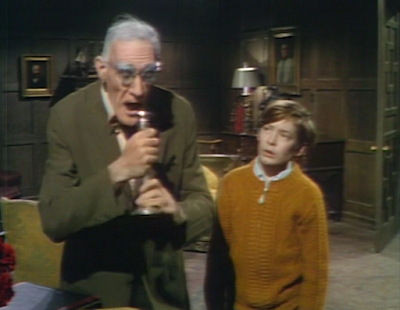 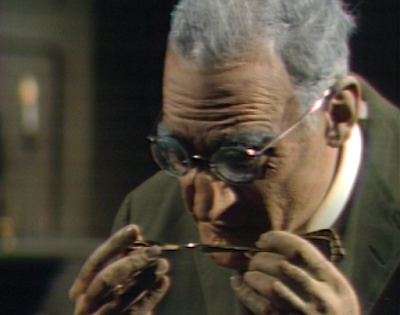 My chief observation about this episode was the use of POV shots of close-ups of the face of the actors. It didn't quite work for me, probably because I know what was involved and how it shifts the actors into looking directly at the camera instead of the other actor.