Elizabeth brings Alex to Collinwood. He asks if Paul is there, and she confirms that he is. Paul comes out of the drawing room, and Elizabeth introduces them. Alex tells her that they've already met. He then goes upstairs to find David, and tells Paul he will see him later. Paul tells her to get that child out of the house. She says he's there to spend the day with David. She tells Paul he can't distinguish between what's real and what's unreal. 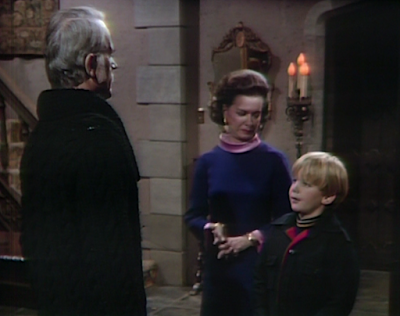 Maggie introduces herself to Alex in David's bedroom. She asks Alex if he'd like a hamburger for lunch and he agrees. Once Maggie is gone, Alex shuts the door. Alex asks David about Carolyn and her father. David asks why he's asking, and Alex tells him he shouldn't ask questions. He tells David to bring him photos of Carolyn when she was young. 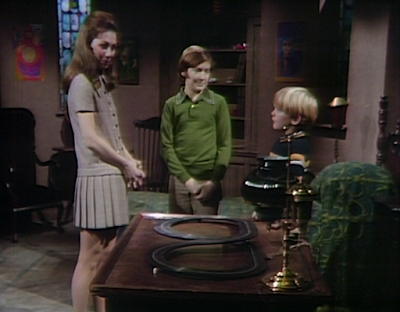 He steps out and Elizabeth comes in. Alex plays with a racetrack. She tells Alex Paul suspects him, and he assures her that he'll be alright. 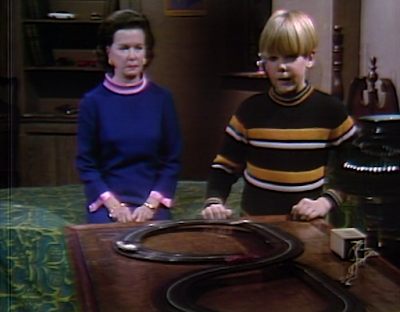 Maggie comes downstairs and welcomes Paul to Collinwood. He tells her that she's responsible, having arranged for Carolyn to meet him. He asks her into the drawing room, and asks what she makes of Alex. She says he seems nice, and Paul warns her that he's dangerous. He says he needs someone to believe him. He says he understands if she thinks he's mad like all the rest. She asks him what's wrong. He says there's a plot against everyone in the house, and Barnabas, the folks in the antique shop, and the boy are all a part of it. He says she can get the evidence he needs. He encourages her to talk to them and find out what they're doing. She agrees to help him. 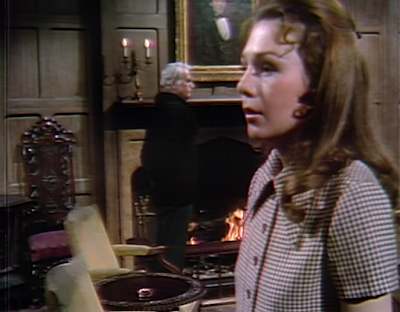 Outside, Alex eavesdrops on their conversation. Paul pulls the door open and grabs Alex. He says he was just looking for David. Alex runs off, and Elizabeth asks what he was doing. Maggie tells Paul he should calm down. She asks him to tell her exactly what he wants her to do. She says she can't question Alex, since he was clearly listening to them. 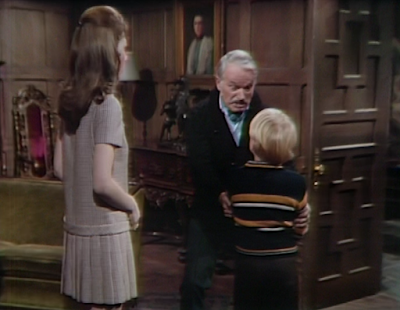 Elizabeth apologizes to Alex, who is crying. David comes downstairs and asks if he's alright. She says he will be. He says she shouldn't have let anything happen to him. Alex is pleased that David found the photographs of Carolyn he requested. 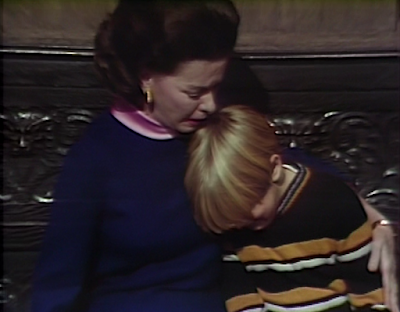 David comes in to the drawing room to show something to Paul. David closes the doors, and shows him some photographs of Carolyn when she was growing up. Paul thanks him, and takes the album. David watches as Paul flips through them. David points out a photo he assumes was taken about the time Paul left. Paul clarifies that it isn't. 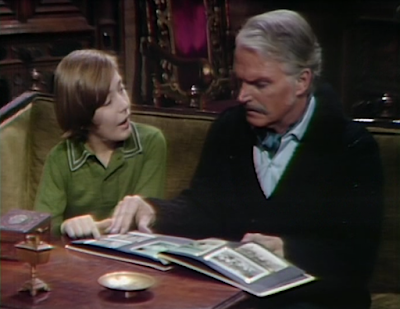 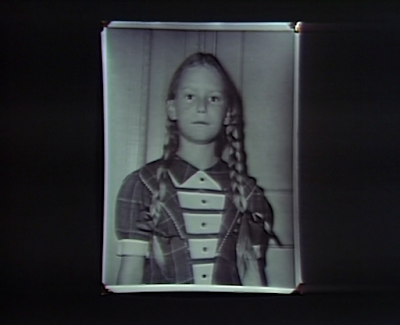 Maggie tells Elizabeth that Paul was very upset. She asks Maggie if she believed him. She says she doesn't, but she couldn't tell him that.

Roger returns to Collinwood, and David rushes to greet him. He introduces his father to Alex. Roger tells David he brought him something from Bangor. He gives him a transistor radio. He turns it on and it plays the greatest hits from The Blue Whale. He thanks his father. Roger goes into the drawing room, and Alex says that he wants it. He tells David that he's going to keep it. He makes David give it to him, and David reluctantly does. They're unaware that Maggie was upstairs watching. She wonders if Paul is right. 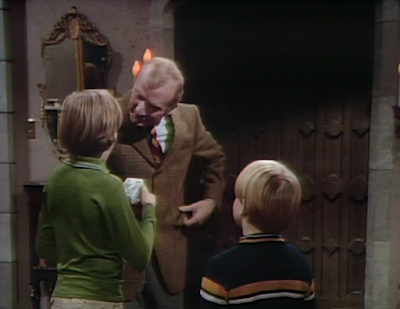 Roger comes in and asks Maggie if there's more mail for him. He spots Paul upstairs and asks what he's doing in the house. He excuses Maggie and Paul comes downstairs. Paul tells him that Elizabeth insisted that he move in. Elizabeth enters and confirms it. Paul leaves them to quarrel. He says he'll await word on who the winner is. 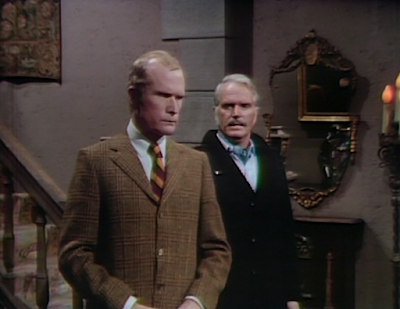 They go into the drawing room, and Roger says she's mad. She tells him that Paul tore up his check. Elizabeth says she's interested in Carolyn's happiness. Roger says he's going to find out why Paul came back. 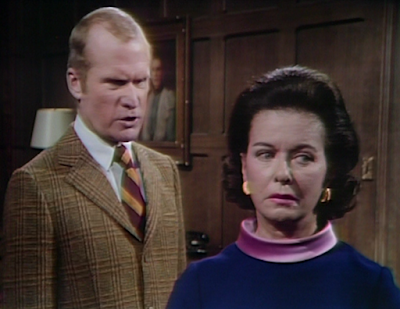 Paul goes up to his room. He hears a noise and asks who's there. Alex comes out from behind a chair. He says he's playing hide and seek with David. Paul asks him how long he'll be in town, and then if Philip is really his uncle. Alex breaks free of his grip and runs out of the room. Paul searches for him upstairs. He then hears a strange breathing behind a curtain. He pulls it open... 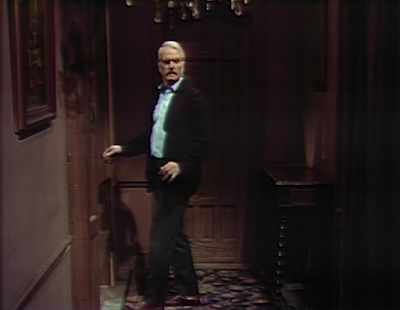 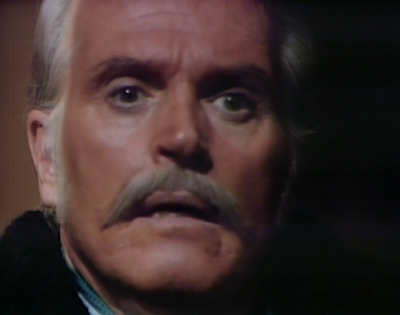 John: It's pretty cool how quickly Alex started coordinating things. I just wish we had a better sense of his plan. I'm curious what the goal of showing Paul photos of young Carolyn. Wasn't she a newborn when he left?

Christine: Haven't you noticed that Alex has an unusual interest in Carolyn for a toothless seven year old? Couple that with the fact that Barnabas told Paul that she was his most precious possession and you may begin to decipher Alex's plan. I think the goal of showing him Carolyn's photos is to remind him that he gave her up to the Leviathans, and is going to lose her, after missing out on seeing her grow up.

John: I don't know if Alex's pressuring David out of his new transistor radio is going to be enough to convince Maggie that Paul may be right. It's funny that rather than thinking Alex was a brat for doing what he did, her real shock came from David's response (or lack thereof)! 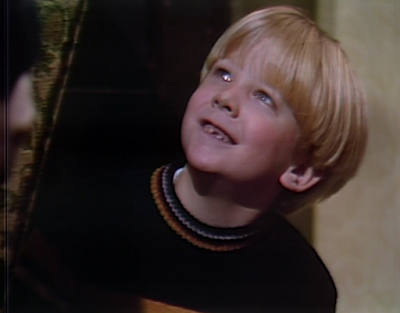 Christine: Well, it is quite shocking that David, who is much older, would allow some pipsqueak kid to bully him out of a rare, prized gift from a father who is not free with his affection for him. It's especially cool that it receives a Bob Colbert station.

John: I do like that Paul has no qualms about being rough with this strange boy, grabbing him and tossing him about several times. 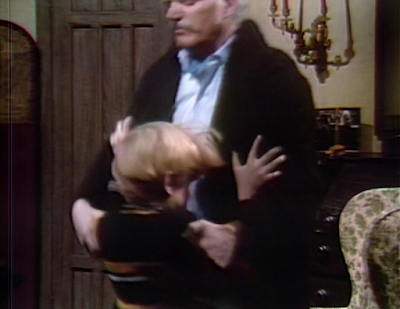 Christine: It is very much the same way Roger treated David when he was a naughty little boy, attempting to murder him, though I was surprised to see that it made Alex cry. I expected the Leviathan child to be made of tougher stuff. So, do you think the heavy breathing indicates that Alexander has reverted to true Leviathan form? Paul's face didn't appear very shocked, so I'm guessing we'll be disappointed tomorrow to see that he found little boy Alex before David could, spoiling their hide-and-seek game.