In his room, Paul sits on a chair placed in the center of a pentagram drawn on the carpet with lit candles at each point. He hears a knock on the door, and as it opens, he screams. It's Carolyn. She asks him what he's doing, and he tells her to go away and stay out of this. She wants to take him to Collinwood. 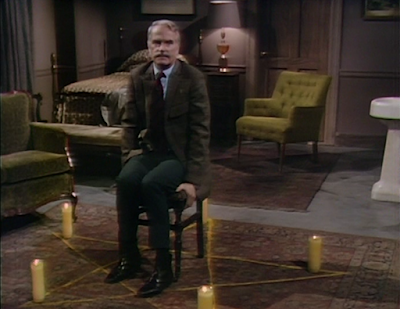 She notices the pentagram on the floor, and points out that Barnabas gave her a necklace with one. Paul asks who Barnabas is, and then tells her to leave. She puts the necklace on him, and tells him that it will protect him. He gets up and says he doesn't hear the voice. Carolyn offers to get him a doctor, and he refuses, saying that they might be one of them. He says he trusts no one but her. 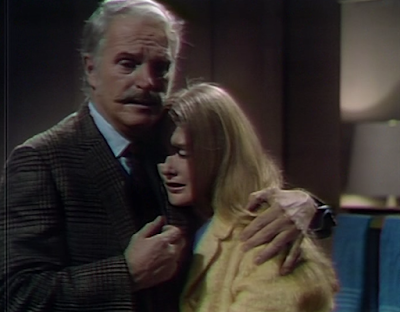 Julia tells Barnabas that if Olivia is connected to Amanda, she's there to get Quentin's portrait. He says she's wasting her time. She says she spoke to Jamison, and based on what he said she thinks Quentin is alive. Barnabas is not interested in her theories. She asks what he cares about when Carolyn bursts in. Barnabas asks her what's wrong, and Julia says she knows exactly what he cares about. He leaves, and Carolyn tells Julia she needs help with her father. 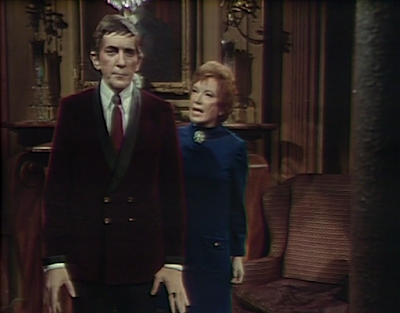 The phone rings at Paul's room. A voice at the other end says the time is at hand. Paul asks who it is. The voice asks if he got their notification of payment due, and hangs up. He leaves the phone off the hook, and it rings again. Paul runs out of his room. 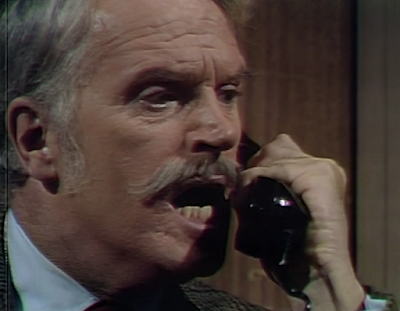 Carolyn arrives at the Inn to find her father's room empty, and the phone off the hook. She calls down to the front desk and asks if there are any messages for her from Mr. Prescott.

Paul Stoddard arrives at Collinwood looking for Carolyn. Julia says she went to see him. He's concerned that something has happened to Carolyn. He says he thinks Julia might be one of them. She assures him that she's not. He goes to grab the pentagram, and it's no longer on the chain around his neck. The phone rings and Julia answers. It's for Paul. She hands him the phone, and the voice says they are watching him, and his payment is due now. He demands to know what payment, but the voice on the other end is silent. 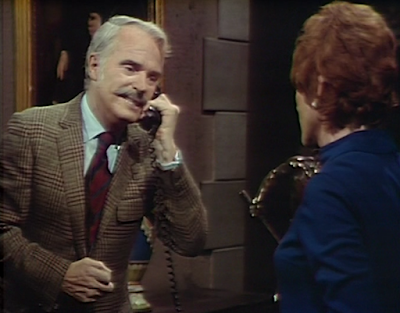 He hangs up the phone and Julia suggests that he call the police. The phone starts to ring again, and he says not to answer it, and runs out of the house. 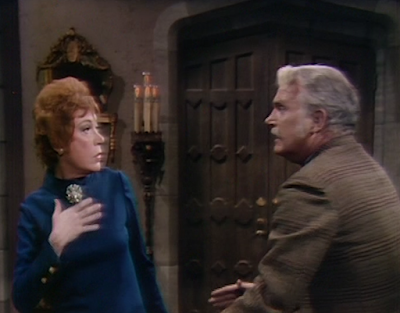 Back in his hotel room, the phone is ringing when Paul arrives. He picks it up, and the voice says they are waiting for him to pay. He hangs it up and sits on the chair, which is not in the center of the pentagram. The phone rings again. It continues ringing, and he runs out of the room. 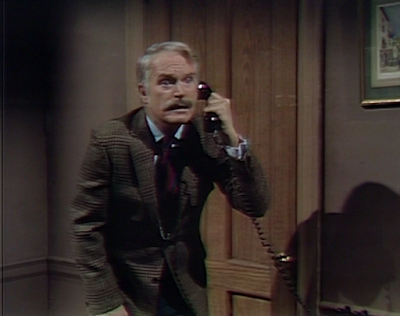 Carolyn puts down the handset, and tells Julia that she let it ring forever. She says she's got to find her father. Julia says he doesn't want help, and Carolyn assures her that he needs it.

Paul arrives at The Blue Whale and notices the mark of the snakes is gone from his wrist. He thinks he may be safe, when he notices Barnabas sitting nearby, staring at him. Barnabas holds up four fingers, and then just his index finger, and summons Paul to join him. 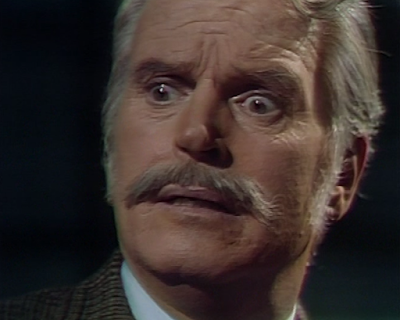 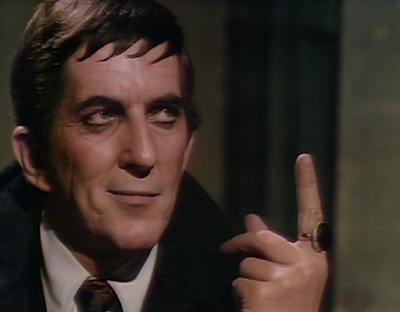 Barnabas says he has been expecting him, and introduces himself. Paul says he doesn't owe him anything, and Barnabas tells him to sit down. Barnabas asks if he remembers the night he left Collinsport 20 years ago. He asks what he did that night. Paul has trouble remembering. Barnabas says if he remembers, many things will become quite clear. Paul says Roger was pouting, and the baby was crying. He says he doesn't know how Carolyn became such a nice person. He describes drinking with Jason McGuire at The Blue Whale. They talked about the money in Collinwood, and how he could never get it. Barnabas asks if he's sure they were alone. He asks if he met a man, which jogs Paul's memory. 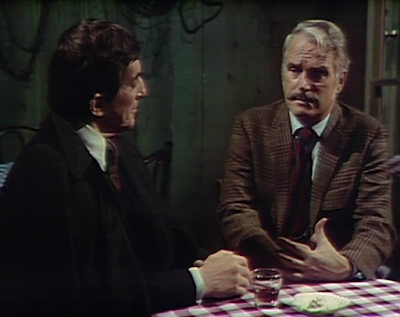 Paul describes a funny man who began to sing in The Blue Whale. The man introduced himself to Paul. The man share gambling stories, and Paul says he'll do anything to change his luck. 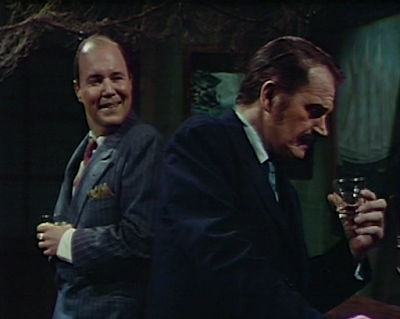 The man asks what Paul would take if the man could give him whatever he wanted. Paul says he'd take everything he could collect in 20 years. The man asks Paul what he would get in return. Paul offers anything of value in his possession, even his most precious possession, collectable in 20 years. 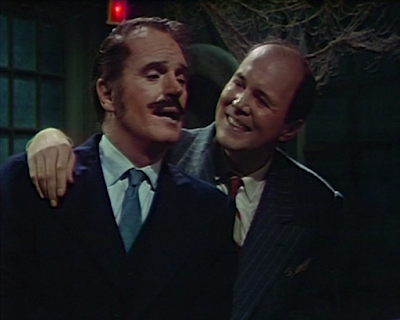 They shake on it, and Paul tells the man he lost. Paul points out that he has nothing of value. The man says that he's clever, and laughs at the notion that Paul outsmarted him. 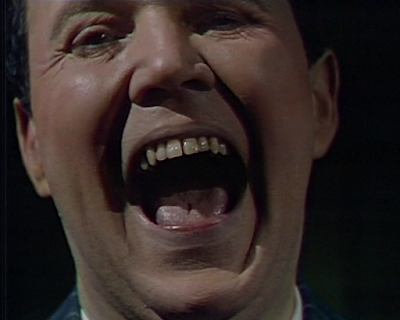 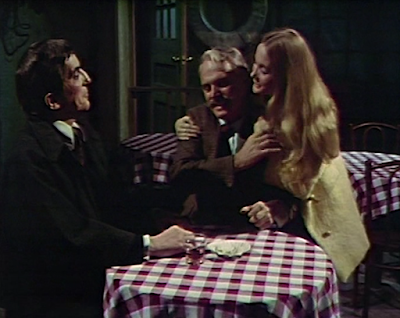 John: I really like the creepy phone voices closing in on Paul. It's almost like a hot-line to Diabolos, wherever he roams. 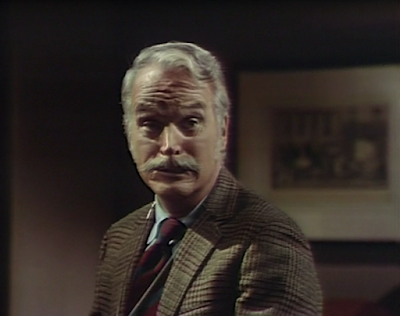 Christine: It's always frightening when the phone is literally ringing off the hook. The incessant calling, no matter where Paul went, really amped up the anxiety level in this episode.

John: You'd think by now Julia would be clear that the current Barnabas in 1969 is not himself. Sure, he's been prone to the occasional outbursts, but it's rare when he gets this dismissive with her, and I think those barbs would hurt Julia more than she's letting on. 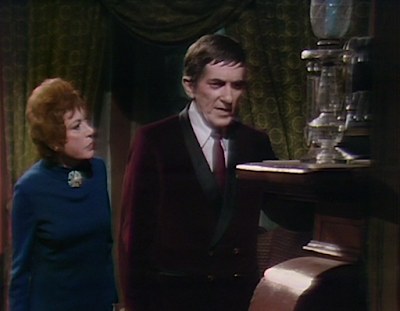 Christine: He may have been right when he said she made a bad detective. His lack of interest in the possibility that Quentin is still alive should confirm for her that something is amiss. How disappointing that she did not take him to task for saying she was beginning to sound "like some hysterical woman novelist."

John: How is it that Paul was the only one not to realize when he said it that his daughter, in 20 years, would be his most precious possession? At least now we all know the price he has to pay...

Christine: This episode played like a Twilight Zone episode. I love the way Leviathan Barnabas informed Paul that his soul was not his most precious possession. What do you suppose the Leviathans want with Carolyn? Will she be sacrificed on the Leviathan altar? I enjoyed the 1940s flashback. It seems the Blue Whale didn't yet have a jukebox back then, and had to make do with a radio on the bar. 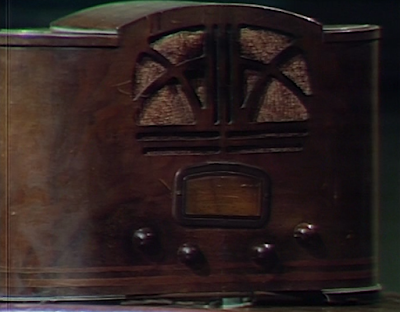