Upstairs, Amy tells David to make Quentin go away. She hears a deep breathing behind a door. She tells David she won't let him frighten her again. She goes into the room where the breathing is coming from and screams. 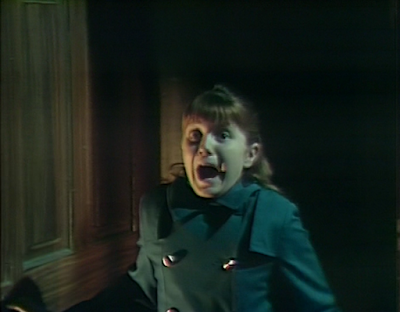 Barnabas comes to the antique shop looking for Megan and Philip. Alex comes downstairs and Barnabas commands him to come. He does not. He says Megan and Philip are gone, and Barnabas says he's there to see him. He asks why he let Amy into his room. Alex asks who told. He then says it was David and throws something. Barnabas tells him to pick it up, and Alex tells Barnabas to pick it up. Barnabas tells him that when he is grown, he will do what he says, but for now he's a child, and he will do as he's told. 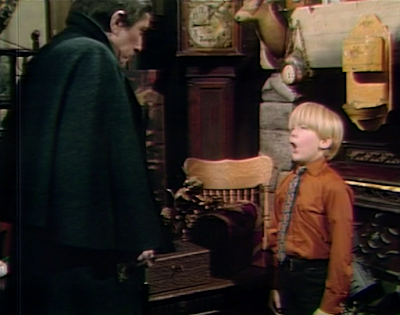 Barnabas says David is looking for Amy, and asks why he did it. He says he hates her, and that she won't say anything as long as she's scared. He says Barnabas is not in charge of him, and he tells him that he is. He says that Haza and Oberon entrusted Alex to him. He asks if he'd like to be locked in his room. Alex says Megan and Philip wouldn't let him do that, and Barnabas explains that he tells them what to do. Alex says he understands, and confirms that he will not let it happen again. Barnabas tells Alex he will be locked in his room, and he leaves to undo what Alex has done. He takes the Leviathan box with him. 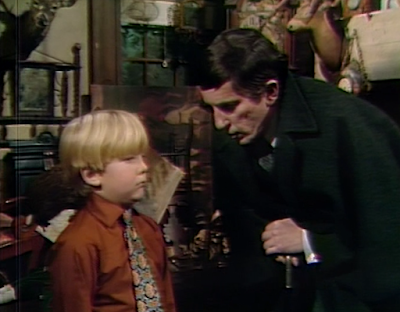 Amy knocks on the door of the cottage where Chris has been staying. There's no answer, so she lets herself in.

Stokes shows Julia the portrait of Amanda that was under the landscape. She says she found another, and shows him the landscape attributed to Harrison Monroe in 1968. He says Osmund tells him Tate died 10 years ago. He asks about her obsession with Tate, and she asks him to see if Osmund knows anything about Harrison Monroe. Stokes asks her why Chris is interested in late Victorian art. Once again, she leaves Stokes with less information than he'd like. 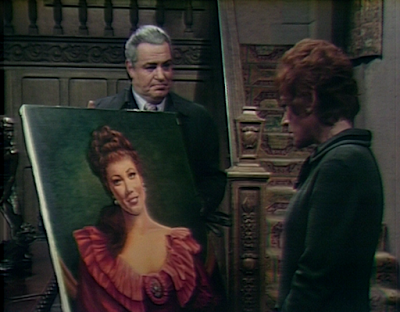 Chris returns home and finds Amy by the fire. She runs to him and he asks her what's wrong. She can't speak. She cries. He asks if it's David, and she shakes her head. She grabs a pen and paper and writes a note: SHOP. He tells her to write more and she throws the note into the fire. There's a knock at the door. Chris lets Julia in, and tells her she can't talk. He says she wrote one word—SHOP. Julia tells him to go to David and demand that he tell him what they did in the antique shop with Alex. 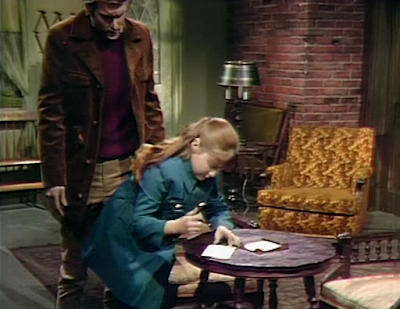 Chris leaves and Julia tells Amy to relax, and then she'll be able to speak. Julia asks if it had to do with Alexander and she turns from her. Julia asks her to write down what Alex did and she refuses. Julia tells her that she doesn't like Alex. Barnabas walks in on them. He asks Amy if she's alright, and she doesn't reply. Julia says she's not well and was about to examine her. He says he's come to see Chris, and would like to wait for him. Julia tells him to come back later. Barnabas asks Amy again what's wrong, and she says water. Barnabas tells Julia to get her water, and she refuses. 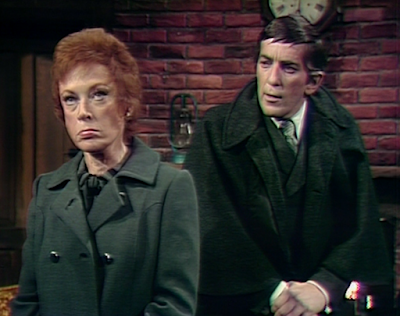 She tells Barnabas to get the water for her. He goes to do that, and Julia tells her not to speak until Barnabas leaves. Barnabas returns and asks if they're exchanging confidences. Amy drinks the glass of water. He asks if she's feeling better, and she doesn't respond. He touches her face, and says he's sure she'll feel better. She lies down and falls asleep. He tells Julia to tell Chris he was there. He says he has other things to do. He says Amy will be much better when she wakes. 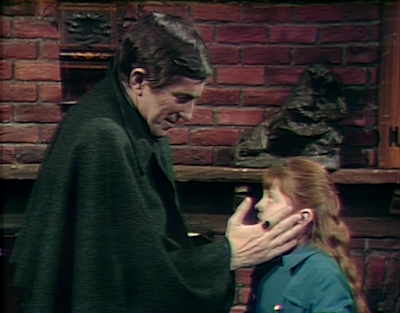 Chris returns. Julia asks if he talked to David. He says that he and Alexander were at the house. He describes how Grant came into the shop while they were playing hide and seek, and she must have thought he was Quentin. Amy wakes up and Chris asks her what happened. She says she saw Quentin. Julia says that she saw Grant Douglas. Amy is sure it was Quentin. She says there was something else, but she can't remember what. Professor Stokes arrives and says that the second landscape was also painted by Tate. He got an address for Monroe, a recluse. Julia says she'll go to see him. 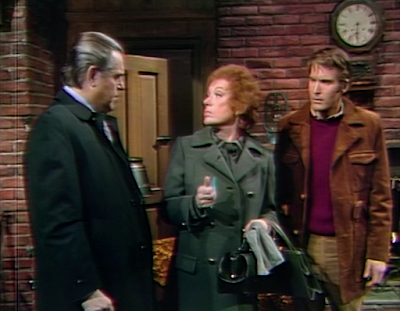 Barnabas shows Alex the Leviathan box. He asks Barnabas how he knows it works. He says Amy is in the intermediary stage, and she won't know what happens until she walks into the room. Alex says that when she's with them, she will open the box. 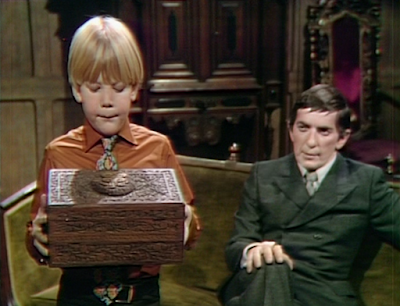 Chris brings Amy back to Collinwood, and then leaves. She finds Alex in the drawing room. She walks past him to the box, and opens it. She then hands him the photo of Carolyn and apologizes for taking it from him. He says she will follow orders now, and she agrees that she will. She leaves him alone with Barnabas in the drawing room. 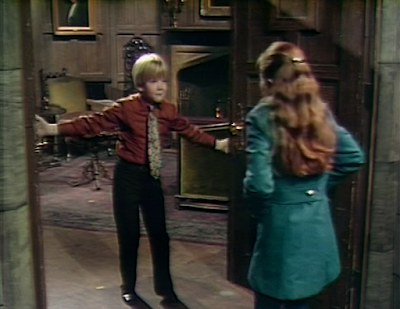 Julia goes to see Harrison Monroe, and a voice tells her to go away. She says she has a message for him from Charles Delaware Tate. The door opens and she goes inside. 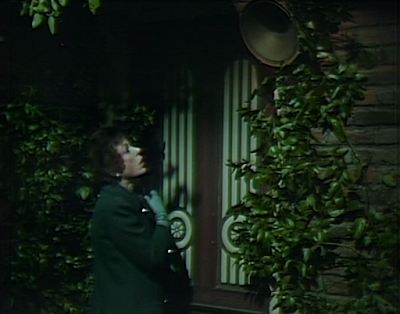 John: This kid who plays evil Alexander is really pretty good, all things said. It does look like they provided him with cue cards for his longer speeches, but he's able to hold his own in adult conversations with Barnabas and the like. Impressive for a kid his age. 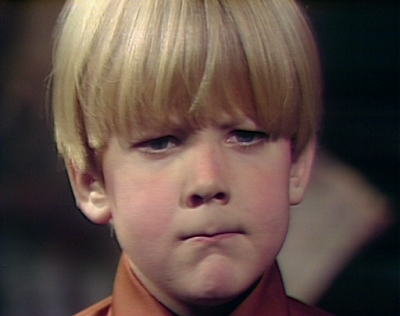 Christine: I loved the way he talked back to Barnabas. It's not always clear what the Leviathan chain of command is, but it sounds like Barnabas is the boss until the Leviathan child comes of age.

John: Why would Barnabas discuss traveling through time so cavalierly in front of Amy?

Christine: Probably because he knew she was in the process of making the Leviathan transition and it wouldn't matter what she knew. Another great Barnabas-Julia close talking face off today. 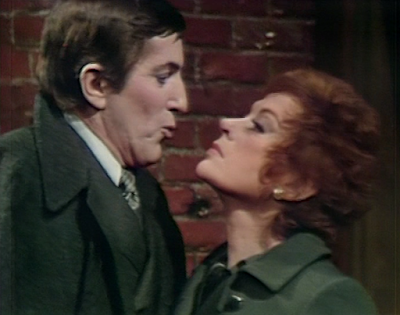 John: I can't wait to see old-age makeup on Roger Davis, who surely has to be the embodiment of the modern-day Charles Delaware Tate/Harrison Monroe!

Christine: I can wait.
Posted by John Scoleri at 6:00 AM

I have to admit that I'm actually going to miss the little brat Alex (oops, I mean Alexander) when he's gone!