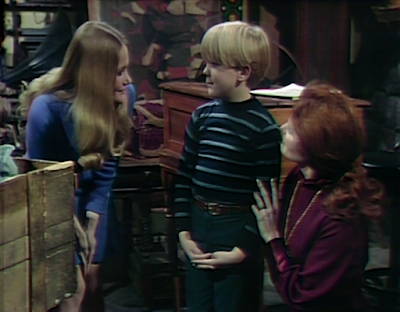 Carolyn hears a bouncing noise upstairs at the antique shop, and asks Megan what it is. She says it sounds like a bouncing ball, and asks her if she should check on it. Megan points out that it has stopped. A ball then bounces down the stairs. She asks Megan who it belongs to. A young blonde boy comes downstairs, and Megan says that there's her darling now. She introduces Alex to Carolyn. She says he's Philip's nephew. She says Philip returned the baby and picked up Alex. He offers to help them work. Megan says he must be careful. He finds an African mask and pretends to scare Carolyn. 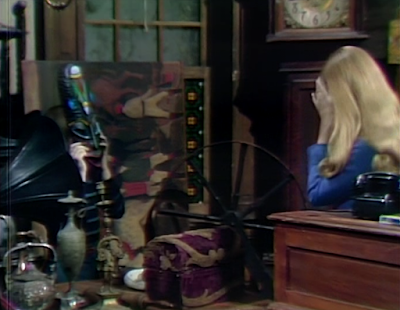 The phone rings and Carolyn answers. It's Julia. She says she'll be right there. She hangs up and tells them she'll only be gone for a few minutes. Alex asks her to stay. She gives him a kiss on the cheek and tells him that they'll be seeing a lot of each other. After she leaves, he tells Megan that he likes Carolyn very much. She says they were sure he would. She goes upstairs and he stays downstairs working on his drawings. 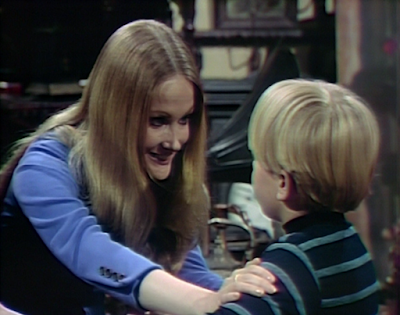 Paul Stoddard comes in and Alex asks if he can help him. He says he's looking for Carolyn, and Alex says she's gone, but will be back soon. Paul decides to wait. Alex stares at him. Paul says he knew the Todd's had a baby, but he didn't know about him. He introduces himself as Carolyn's father. Megan comes downstairs and tells Paul that Carolyn went to visit someone at the hospital, and should be back soon. 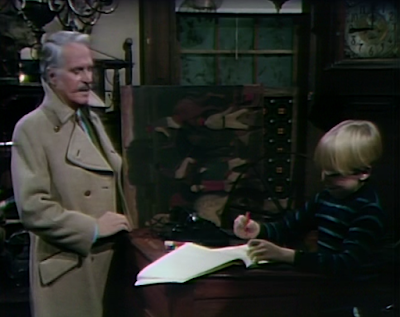 Alex goes to the calendar, removes the December page, and circles January 15th. Paul asks why he did it, and Alex says that's his birthday. He invites Paul, and says Carolyn will be there. Paul thinks the boy and Megan are in league with Barnabas, and starts to leave when he runs right into Barnabas. Barnabas tells him it won't be long now, and Paul hurries out. 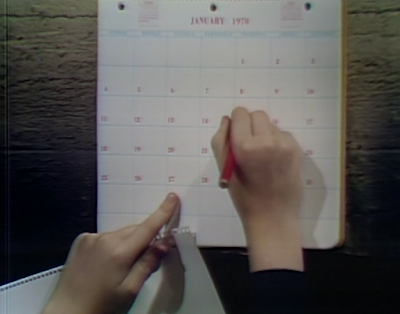 Megan introduces Barnabas to Philip's nephew Alexander. He asks about the baby, and Megan says he's been taken back to her sister. Megan asks Alex to show Barnabas the first toy he found in the shop, and Alex pulls out the African mask. Barnabas smiles. 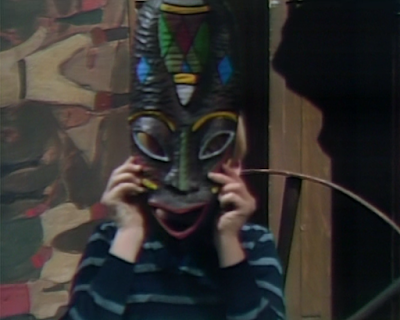 Paul returns to his room at the Inn. The calendar is back on his wall with the 15th of January circled. He realizes that someone has been in his room. Carolyn arrives, and he says there has to be a way out for them. She tells him there is a way, and hands him the check Roger wrote. Paul says they want to prove to her that he came back for money and nothing else. He hears Alex's voice saying Carolyn is going to be at his birthday. Paul tells Carolyn the check could be the difference, but it would ruin the two of them, and he doesn't want that. He tears it apart. She says she was so afraid her uncle was right, and she's so happy he tore it up. He says they'll be fine if they can get out of Collinsport. 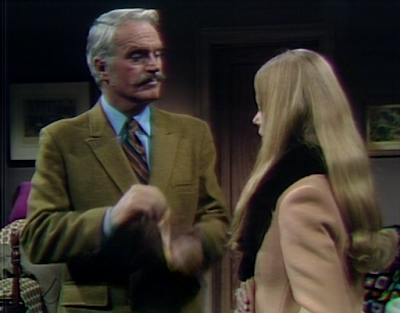 Barnabas fills in Elizabeth on the man he hit with his car. Barnabas says he has been cleared of any negligence of wrongdoing. Carolyn returns home and hears them talking in the drawing room. She sneaks upstairs.

Paul is packing his bags when his phone rings. He confirms that they'll be on the 10:05 to Boston, and he'll meet them at the station.

Megan tells Alex it's time for him to go up to bed. He says he's afraid. Very concerned, she asks why. He says he's beginning to feel alone. She shakes him and says she must know what to do for him. 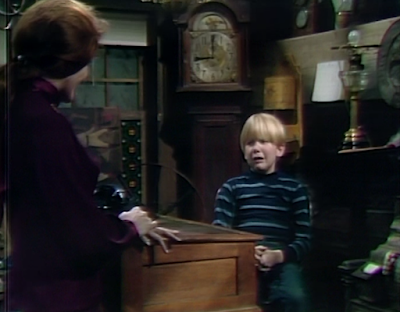 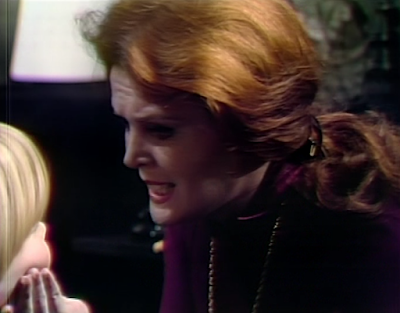 Paul tears the calendar off the wall and throws it away. Elizabeth storms into his room and asks where Carolyn is. He says he's leaving. She says Carolyn was not in her room and all of her clothes are gone. He tells her that Carolyn is in danger in Collinsport. He says they all are. He says it's an evil organization with frightening powers. He says they've been after him sine he came to town. She asks what they want from him. He says he doesn't know. She asks why they're all in danger, and he says their leader is in their midst—Barnabas Collins. Elizabeth says she's been distressed about the change in Barnabas since he came back. Paul swears it's the truth. She tells him she wants him to come back to Collinwood. She says if he knows about the danger, then he's the one to help them fight it. He's surprised. She says she doesn't know how things will work out for the two if them, but she believes he's concerned about Carolyn. She tells him to go get Carolyn and bring her back to Collinwood. 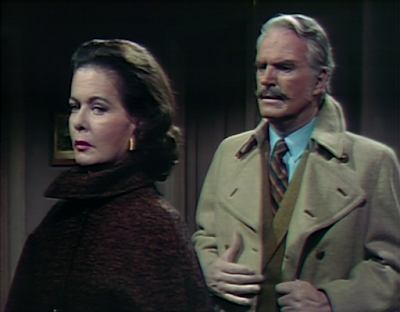 He leaves, and she picks up the phone and calls the antique shop. She tells Barnabas that everything will be alright now, and that Paul will be returning to Collinwood with her. 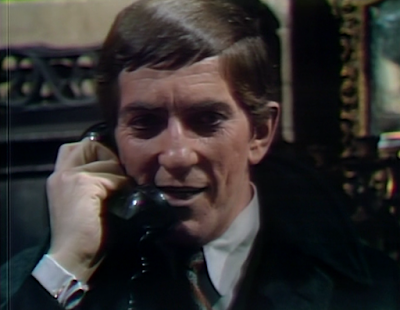 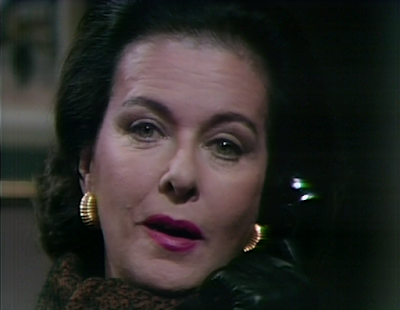 John: So Megan and Philip are clearly going to have a revolving door for fostering their brother's and sister's kids. I wonder how long until Alex is replaced with the new model...

Christine: They're going to have to think of a new story to explain the teenager that's bound to show up next week.

John: Isn't Paul's payment past due by now? Why would he be haunted by Alex's birthday on January 15th? I do hope Alex goes with an African tribal theme so everyone can wear masks!

Christine: And sharp little knives for party favors! Little gap-toothed Alex is already jealous that Carolyn may have a new boyfriend and is now feeling lonely. No doubt Megan will set Carolyn up to babysit the little tyke so he can stare at her all he wants. John: So I was expecting a little more coordination amongst these Leviathans. Half the time, they all appear to be in on the plans, and the other half no one really seems to know what's going on with each other. Do Megan and Philip get that Barnabas is the ringleader? Is Barnabas truly aware that Alex is in fact the rapidly growing baby boy? Have the writers got any of this figured out? I guess time will tell...

Christine: Leviathan Barnabas keeps telling Megan she won't remember that he's the one pulling the strings. I think he knows the Leviathan child is growing rapidly since he told Megan they were entering a new phase. I'm wondering how Liz became one of them all of a sudden, and why didn't Leviathan David make her a Leviathan when she was on his back about the Leviathan book? Or is that not how it's done? I don't think the writers know. Maybe Barnabas is having a dream. 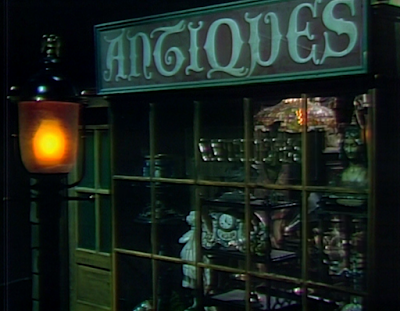