Back in his room, Paul wonders what the note meant. He realizes that someone knows he was meeting Carolyn at the antique shop. He senses someone outside the door. He thinks it's just his imagination. He reaches for the handle, and sees a tattoo of the snakes from the altar on his wrist. 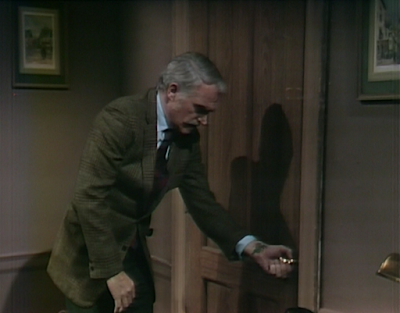 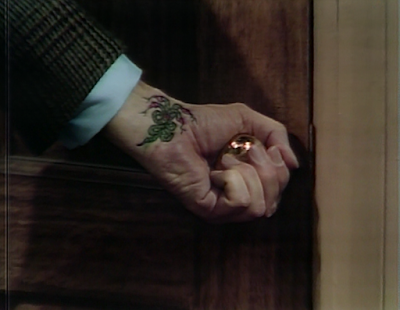 Carolyn reads Paul's note, requesting that she call him. 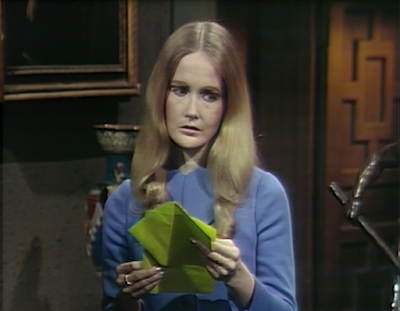 Paul tries to wash away the mark on his wrist, but it won't come off. His phone rings, and it's Carolyn. He asks her to come see him. Her mother tells her they're late, and asks who's on the phone. Carolyn tells her she can't go. Carolyn leaves, and Elizabeth picks up the phone. 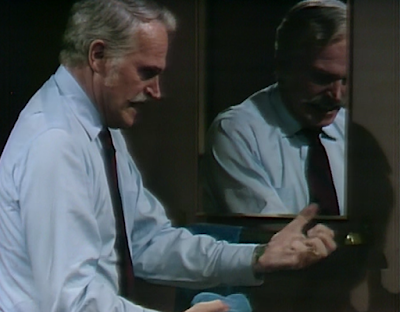 Carolyn arrives at Paul's room at the Inn. He apologizes for interrupting her plans. He tells her he felt lonely. He starts to light a cigarette, and when he remembers what's on his wrist, he shoves his hand back into his pocket. Carolyn asks him what's wrong. He tells her he has to get out of this room. He says how much he misses Collinwood. He tells her that someone is trying to do something to him. He says he doesn't know who, or what. Carolyn offers to help, including taking him to Collinwood. He tells her that he loves her. She says they'll make everything all right. 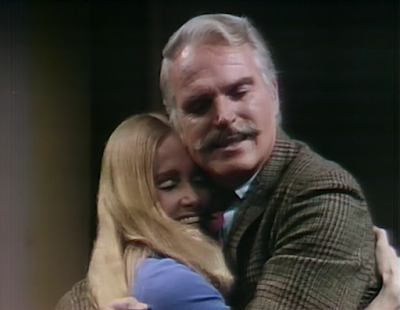 They hear someone at the door, and Elizabeth enters. She tells Carolyn to leave them. Paul says she should give them some time alone. Before leaving, Carolyn chastises her mother for following her, and not trusting her. 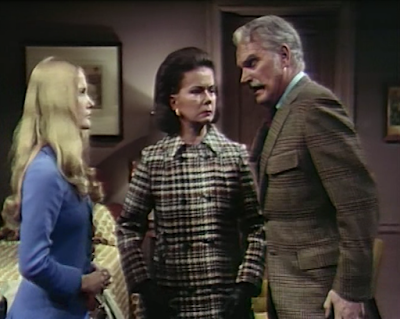 Elizabeth points out that while his charm may work on Carolyn, it won't work on her any more. He says he has come back for her. He asks if she thinks he's come back for her money. She says it wouldn't surprise her. He says his memory of her brought him back to Collinwood. She asks what he wants, and he says nothing. She says that's what he'll get. 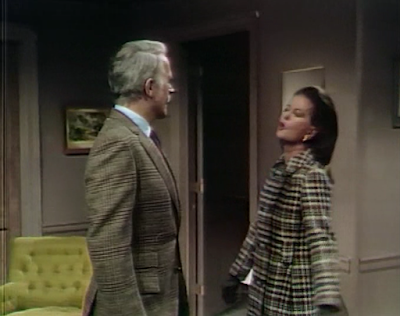 He asks why she kept his name, and she says it was for Carolyn's sake. He says he never got love from any of them; until Carolyn. She says Carolyn made a mistake, and tells him to leave town. She threatens that if he does stay in Collinwood, it will be a visit he'll never forget. He accuses her of being responsible for what has been happening to him, and then realizes that she didn't know he was in town. He says he's in trouble and she says she doesn't believe him. She tells him to be on a train out of town that night, or she'll call her lawyers, and the manager of the Inn will find him an unwanted guest. 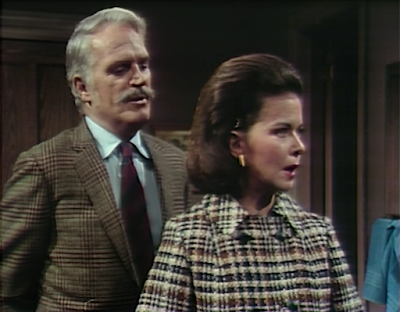 At The Blue Whale, Paul drinks by himself. He didn't take the train out of town, and tries to convince himself that nothing is going to happen to him. He notices another man in the bar, watching him. The guy offers to buy him a drink, and Paul tells him he buys his own drinks. He wonders if he's one of 'them.' The guy says that he's got it bad; he wants to talk but he won't. 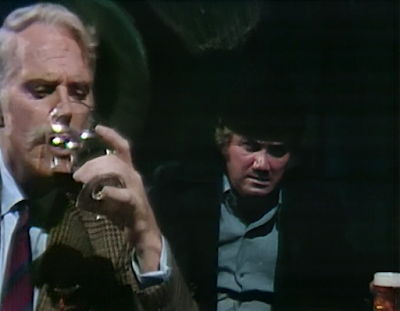 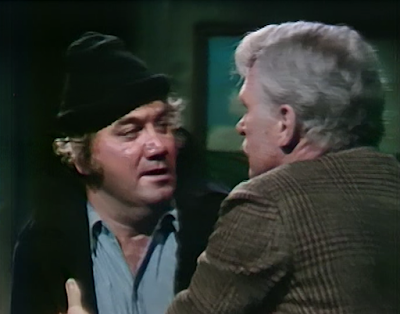 Elizabeth returns to Collinwood. Carolyn asks why she didn't bring her father back. She says she doesn't know him, and she does. Carolyn says that she knows him. Elizabeth says he's not to be trusted, and she forbids Carolyn from seeing him. She says that he is her father. 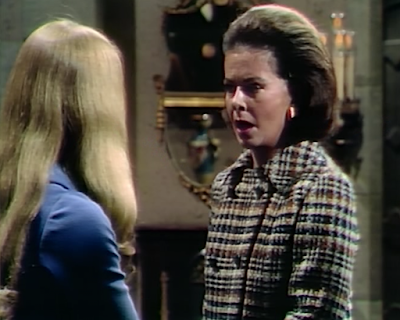 Paul draws a pentagram on the carpet. He hears a voice calling him saying a payment is due tonight. Paul says they won't get him. He lights candles and places them around the pentagram. He places a chair in the middle, and sits in it where he'll be safe. He hears a knock on the door, and then it opens. He screams. 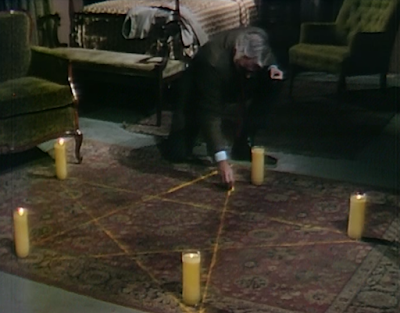 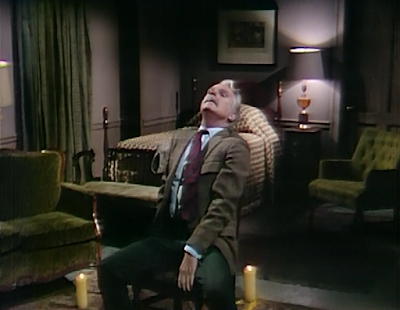 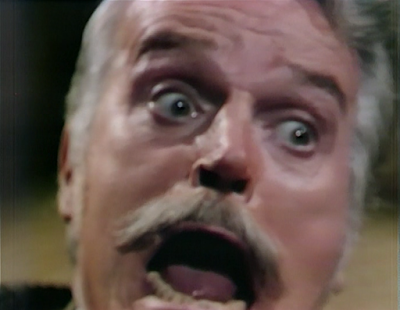 John: What happened to Paul's calendar? I guess they wanted to get away from the December 4th reference, and deal with relative days to the timeline in the show...

Christine: Carolyn is acting like a teenager again when sniping at her mom about her dad. I hope she'll take up with Buzz Hackett again to get back at her for forbidding her to see her deadbeat dad.

John: Paul begs Carolyn to come see him because he was lonely? Surely he could have come up with a better story than that (despite it seemingly working on her). And why is it that Elizabeth wasn't very surprised to find Paul, alive and in Collinsport?

Christine: She wasn't surprised because Jason let her know he was still alive in Episode 273, and last saw him in Hong Kong. She probably realized her ex would come dragging himself back, much like Jason McGuire did, when he was low on funds and needed support. Joan Bennett is in her element today while putting Paul Stoddard in his place. 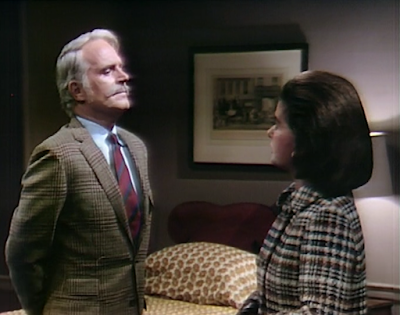 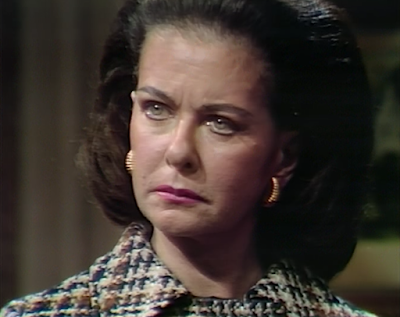 John: The man in the bar (Ken McMillan making his TV debut) would later go on to play the Constable in Tobe Hooper's adaptation of Stephen King's Salem's Lot. 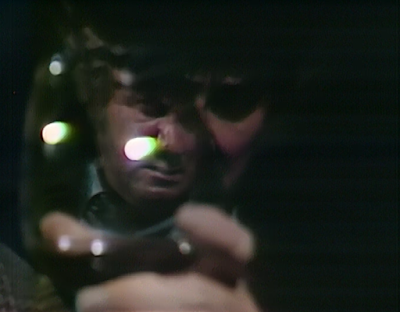 Christine: So, I'm guessing the sailor, who appeared to take an unusual interest in Paul Stoddard, was the one who instructed him on how to draw a pentagram for protection. We'll see if it holds up to whatever has barged into his room unannounced.

They should have made the Paul/Elizabeth story a regular soap opera story like they did with Liz and Jason.