A man sits down next to Carolyn at The Blue Whale, and Carolyn is confused. The man says it is strange situation to introduce himself to his own daughter. He tells her that he is Paul Stoddard, her father. Carolyn says she'll never forgive Maggie for arranging this. Paul says he thinks he deserves five minutes of her time. She asks how she can, considering what he did to her mother. He admits he tried to take Elizabeth's money. Carolyn points out that her mother was imprisoned in Collinwood for 20 years because she believed that she had killed him. He says he doesn't know what she's talking about. 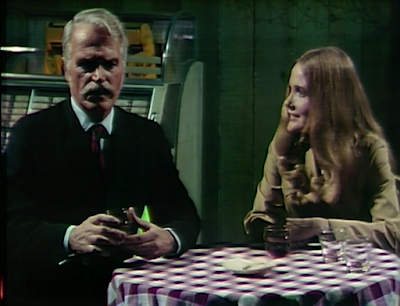 Carolyn asks if he remembers his getting caught planning to steal from her, and his plans with Jason McGuire. She says that she knows all about that night, and how Jason told her that Paul was buried in the cellar. Paul asks when Jason came back, and Carolyn describes how he tried to blackmail her mother. Paul denies having any part in Jason's blackmail plans. He says when he came to in the basement, Jason told him that Elizabeth had paid him to kill him. He says that he agreed to leave Collinwood and never come back, so she would think he was dead. He says he went to California, and got everything he wanted in life, except his daughter. He says when he came back and saw her in the woods, he was determined to speak with her. He says that his five minutes are up. She asks why he didn't tell her who he was in the woods. He can't explain, but wonders if they can make up for the mischief that Jason did. Carolyn says that since he's come so far, she'll see how far she can get her mother to come. 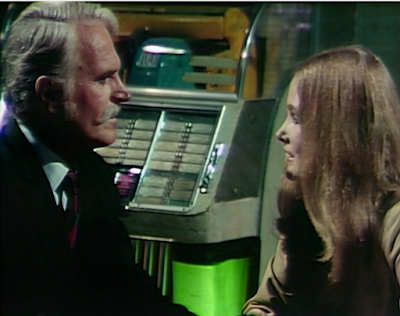 Philip and Megan look down at the cradle. She says she's got to feed him. Philip says he senses that he's telling them what they want to do, even without crying. Megan tells Philip that he needs to go see Barnabas about the furniture. He says he doesn't want to leave the child who is lonely. Megan says she'll stay with him. She says there's something else he has to do, and he knows what. 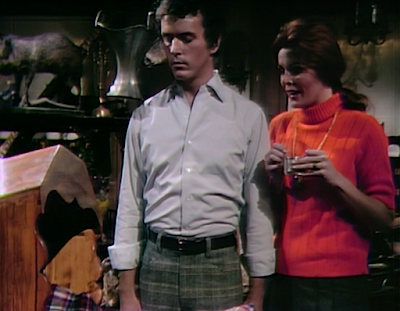 Paul tells Carolyn that it took all his courage to come to meet her tonight, afraid that she wouldn't accept him. She says that he is her father, and her mother will have to accept him, too. She invites him in, and he says he's used up all of his courage in The Blue Whale. He says it will take Elizabeth more time to accept him. He asks her to talk to her mother about him, without revealing that she's seen him. He asks how he can reach her, and she says he can leave messages at the antique shop. He kisses her forehead. 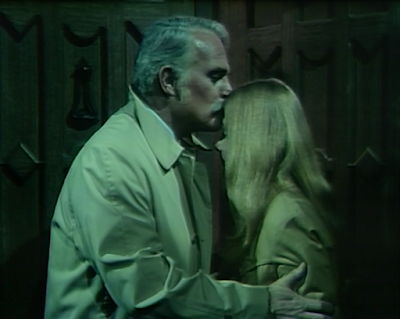 Carolyn comes inside and finds David. He says her new boyfriend is a surprise. She tells him it's terrible to spy on people. She says she won't tell on him if he doesn't say anything. He asks who the man is, and she says she'll tell him in time, and then sends him up to bed. 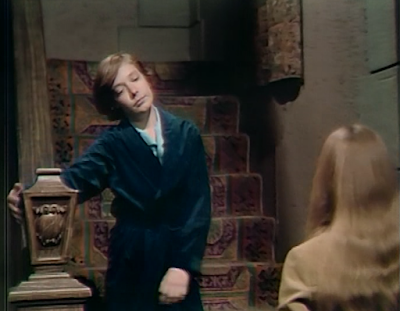 There's a knock on  the door at Collinwood, and Carolyn answers. It's Philip from the antique store. She tells him that she needs a favor. She says that she told a man that he could reach her through his shop if that's okay with him. He says they actually want her to work at the shop at a regular basis starting tomorrow. 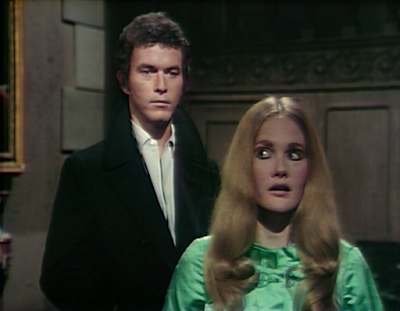 Carolyn arrives at the antique shop in the morning ready to get started. Megan comes out holding a baby. Carolyn asks whose it is, and she says it's her sister's baby, Joseph, and they're watching him while she's vacationing in Canada. Carolyn apologizes for being stupid and self-centered yesterday, thinking it was her and not her sister and her baby they were thinking of. Megan takes the baby upstairs. 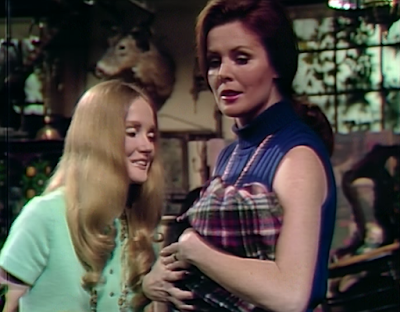 David and Amy come in to the antique store. David says that his father doesn't know if it's proper for her to be working there. The kids are browsing around when Paul comes in to see Carolyn. She calls him Mr. Prescott, and then tells the kids they had better go. She explains to her father that the boy was Roger's son David. She says she hasn't spoken to her mother yet, and Paul is surprised. He tells her not to wait too long to talk to her. She asks if something is wrong, and he asks her to speak to her mother as soon as she can. She says she will tonight. 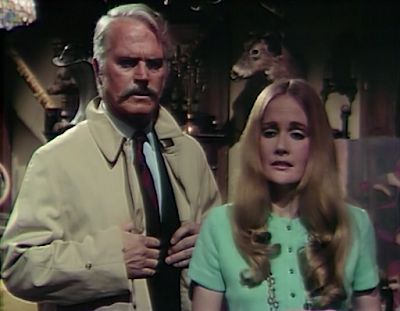 That night, Philip asks Megan where the book is. She asks if he took it upstairs, and he says he didn't. She says they must search the shop for it.

Amy asks David why he took the book, and he says he had to. He says that Carolyn said his father would have to pay for anything they damaged, and he ripped a page while looking at it, so he took it. She points out that it's not even in English. She tells him that he had better return it. She asks if he's going to, and he says he doesn't know. 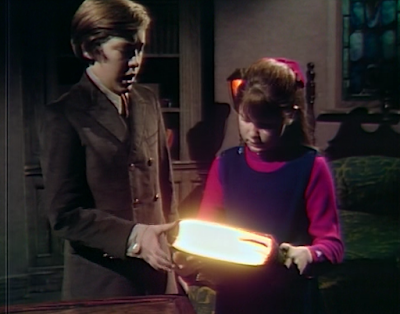 Megan says someone must have taken the book. She says that whoever took it must pay for it with their life. She then asks what made her say that. 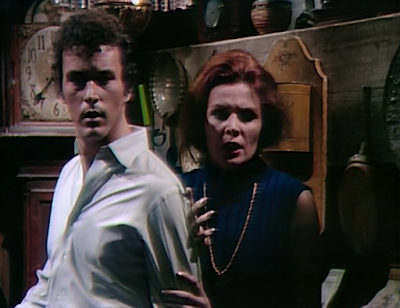 She says that everything is different now that they serve 'him.' Philip agrees that they will track down and kill the thief. 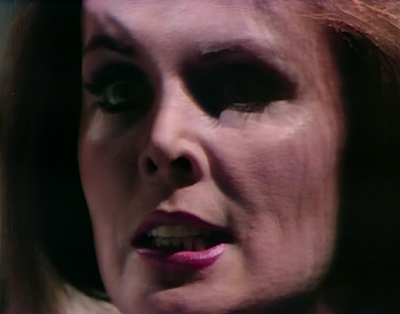 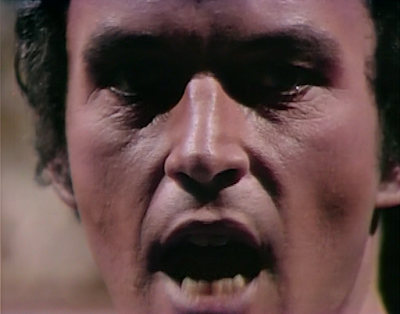 John: It's awfully strange watching Paul talk about Jason, when he's portrayed by the same actor. I almost wish Jason could make a return appearance so the two men could face off!

Christine: Folks that tuned in after the arrival of Barnabas did not experience this sort of confusion. Paul has got Carolyn thoroughly bamboozled. I doubt he'll have the same sort of influence with Liz.

John: Let me get this straight. To avoid getting in trouble for damaging an old book, David decided that stealing it was the smart thing to do. That's Collins' logic for you! 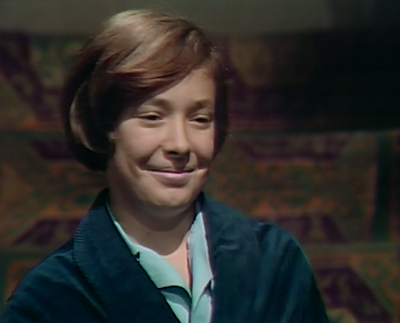 Christine: Carolyn warned him that his dad would have to pay for anything he damaged, and even though Roger can easily afford it, he will probably get very cantankerous over having to pay for David's mishap.

John: I'm not particularly impressed by the performances of Megan and Philip. They seem to be sleepwalking through their roles as custodians of this demon-baby. And it's particularly silly when they try to convince us that they're coming in and out of their trance. Let's kill him! That's strange, I never used to threaten to kill people...

Christine: That was great! You know what's missing on these two? The robes. Give them a pair of robes and some heavy eyeliner, and that sleepwalking routine will have a better effect. After seeing Pansy Faye's boa at the shop in yesterday's episode, it looks like we've now come across Sarah's doll and several of Barnabas' toy soldiers, both of which Angelique used in the past to cast spells. I wonder how many other items from Collinwood of the past will turn up at the antique shop. 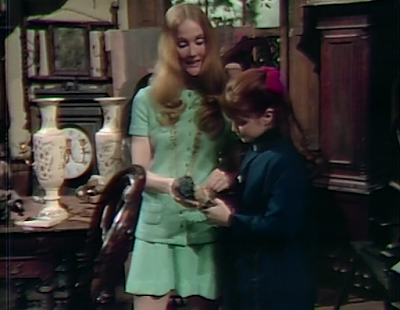 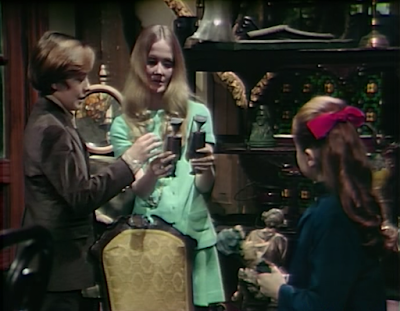 I always thought it was way too soon after being possessed by Quentin to have David possessed again.