A stranger looks at the portrait of Barnabas. Julia arrives at the old house and sees someone through the window.

Inside, the man puts the candle out. He steps outside, where Julia stands with a flashlight. She demands to know who he is. He says he was to meet someone, and asks if she's sure she doesn't know who he is. 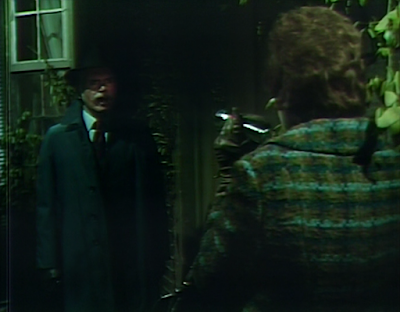 Carolyn arrives and Julia turns to talk to her. The man slips away. She tells Carolyn they should go inside the house to see what he was after. Inside, Julia tells Carolyn to bolt the door. Carolyn asks if she had a chance to look for Barnabas, and Julia says she's sure he's not there. Carolyn says she said she was sure he was on his way back. Julia tells Carolyn she can't tell anyone in the family, but Barnabas didn't leave—he disappeared. She says that he can only reappear in the place he disappeared. Carolyn asks if he returned in an unconscious state, he could be in the cellar now. Julia rushes downstairs. 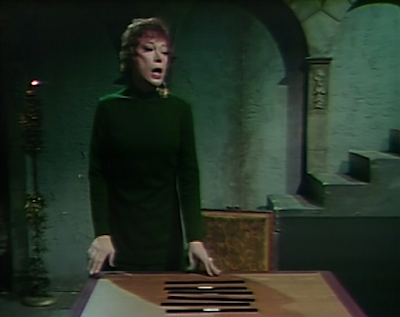 While she's downstairs, Carolyn spots a man outside the window. She screams and Julia rushes upstairs. They see no one outside. Julia says she didn't find Barnabas, but she'll spend the night. Carolyn agrees to stay too, afraid to walk back through the woods with a stranger lurking about. 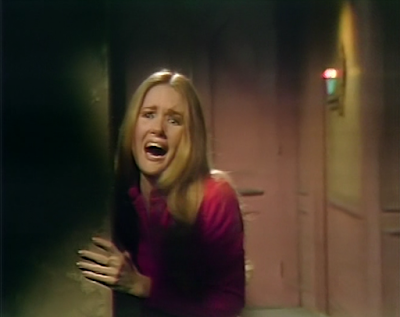 The next morning, Julia tells Carolyn that nothing happened overnight. Carolyn says she dreamed of marrying Chris Jennings, but he disappeared. Julia finds the dream odd, and Carolyn says that he called her last night. Julia says she needs to return to Collinwood to make a call before they go antiquing. 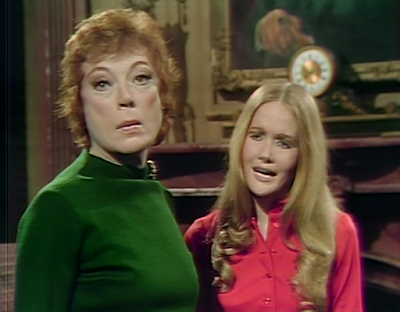 At the antique shop, a woman and a man review their inventory, including a whale oil lamp described as belonging to Herman Melville. Carolyn arrives with Julia, and introduces her to Philip and Megan Todd. 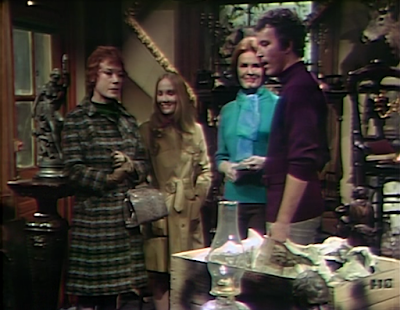 Philip shows Carolyn a canvas by Charles Delaware Tate. Julia asks if he's sure it's authentic, and how much it is. He explains it's a later work from 20 years ago. Julia says he painted at the turn of the century. Philip says he did, and he would have been close to 100 when it was painted. 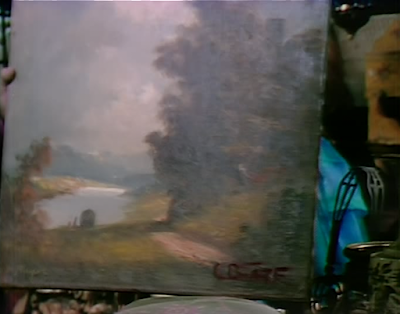 Julia says he had to have been in control of his faculties in his 80s. Julia asks again how much he wants for it, and when Philip says it's $300, she agrees to buy it without hesitation. She asks him to let her know if he finds anymore of Tate's paintings. Carolyn seems shocked by Julia's casual spending. The two leave, and Philip and Megan celebrate their big sale. They toast Charles Delaware Tate, alive or dead. 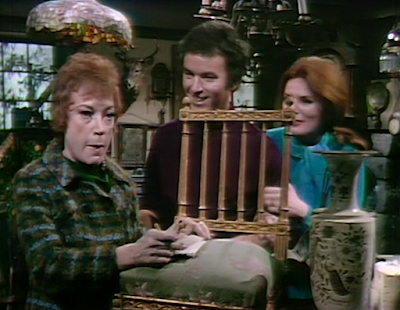 At Collinwood, Julia looks through the phone book. Carolyn comes in and asks what she's doing. Julia tells Carolyn that she's looking for a particular portrait by Charles Delaware Tate, and thought he might still be alive and listed. She then calls the auction house that Philip bought it from. She wonders if Tate is still alive, and can help Chris Jennings. 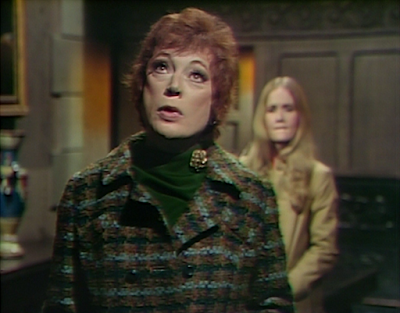 Carolyn stumbles across the Leviathan's altar. A stranger comes up and tells Carolyn he means no harm. She accuses him of sneaking around the old house and tells him to stay away. She asks what he wants, and he tells her he's not sure. She says he's on Collins property, and tells him her name is Carolyn Stoddard. The man is shocked. He tells her she's very beautiful. He tells her that he hopes they meet again. He leaves her alone at the altar. 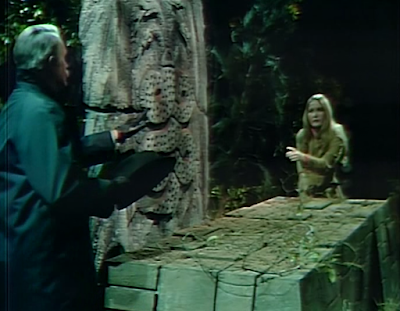 At the antique store, Megan looks uncomfortable and suggests that they close the shop early. She asks Philip if he believes in premonitions. She says she just had a strange feeling that something terrible will happen to them if they stay. She says they should sell the shop and leave Collinsport. He doesn't understand what came over her. He tells her they are going to be a big success. 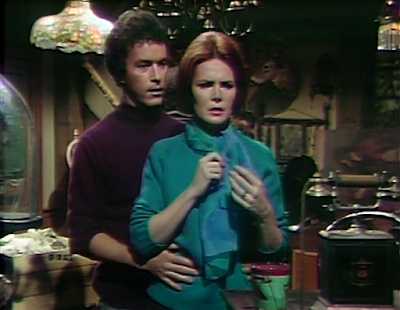 The strange man returns to the altar. He leaves, and it slides open. 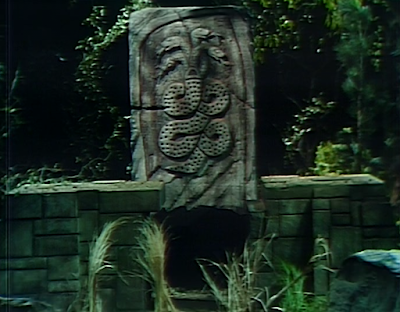 John: Julia is pretty casual after the mystery man slipped away. And Carolyn is pretty cool with the notion of Barnabas just disappearing. Is this the laissez faire attitude of 1969?

Christine: Collinsport is known for attracting Bohemians, so the only strange thing about the mystery man was that he looked so square. I love the new Antique shop set, and am totally pleased that they do offer paintings, just as I'd hoped. Apparently, Tate was staying safe by sticking to landscapes in his later days. 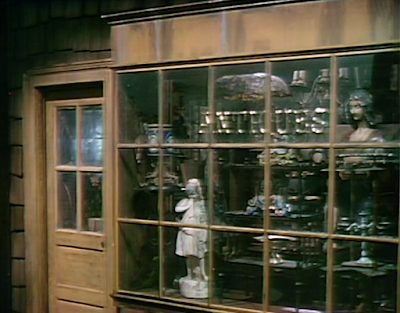 John: The late sixties were clearly a more casual time. Come across an altar in the woods on your property that has never been there before? No big deal. I'm curious where it leads to now that it has opened! 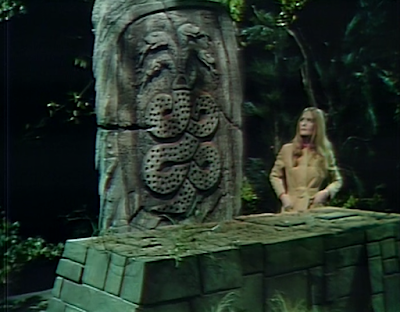 Christine: I think Carolyn was sufficiently curious about how it could have suddenly appeared without observing anyone actually on the grounds to construct it.

John: Amazing reveal in today's credits. I can't believe that Dennis Patrick, the man who played the great Jason McGuire, is back as Jason's old friend, and long-believed dead Paul Stoddard! Great to have him back, but who would have thought he'd return in THAT role. 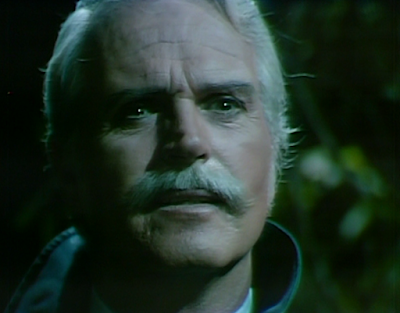 Christine: I love that they brought Dennis Patrick back for this role! It will be interesting to see what connection he has to Leviathans, and find out what his plans are at Collinwood. I can't wait for him to meet up with Elizabeth. Incidentally, I wonder if we're ever going to find out if David survived, and if Barnabas had the intended effect of exorcising Quentin's angry ghost.