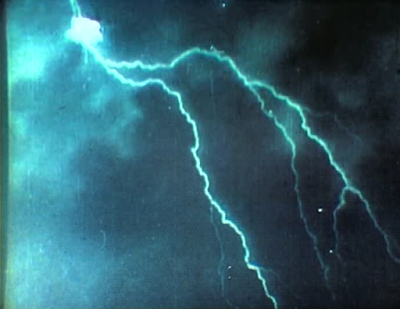 Lightning strikes, and the altar slides open. Barnabas appears carrying the box, and says an incantation. He walks away and the altar closes. 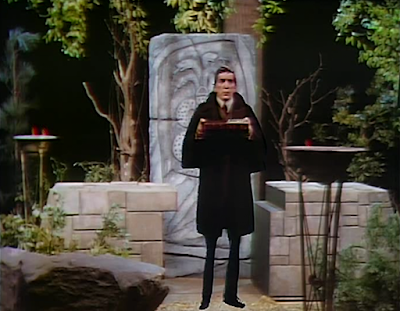 Julia shows Professor Stokes the Tate painting. He confirms that it's authentic, and asks her about her interest in it. She asks how she can find out if Tate is still alive, and he offers to research it. He tells her that he has to go see a patient who had a traumatic shock, with her hair turned white and the loss of the power of speech. He says her name is Sabrina Stewart. Julia says she knows her brother, and she's beyond help. Stokes says she's been improving under his care, and soon may be able to tell him what the traumatic event was. Stokes leaves and Julia hears a heartbeat. She looks at the portrait of Barnabas. 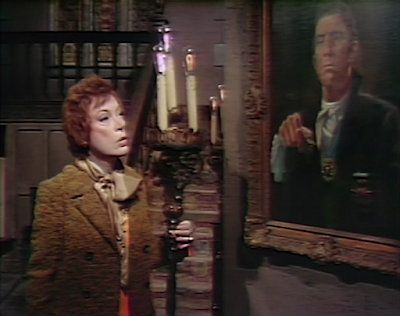 Chris Jennings arrives to see Carolyn. Julia asks him why he left Windcliff. She reminds him he can change at any minute without warning. He asks her if there's another way. She tells him there's a man named Charles Tate who may be able to help him. He says that if Sabrina regains the power of speech, she'll tell them everything she knows. 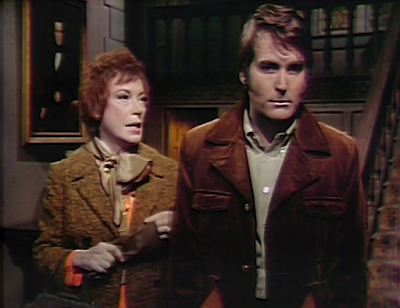 Stokes works with Sabrina, getting her to speak a little. He asks what happened to her that frightened her. She asks who Carolyn Stoddard is, and then says she must see her to tell her something. Stokes asks what she wants to tell her. 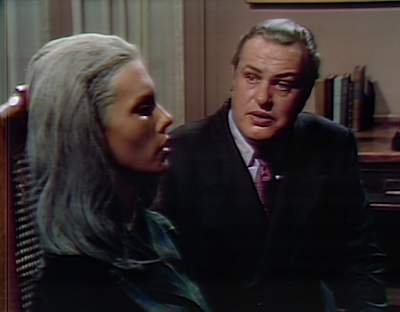 Carolyn comes downstairs to see Chris. She asks where he has been and he tells her he had to think things out. He asks her if he should leave and she says no. The phone rings, and it's Stokes. He asks her to come to the Graham rest home immediately. He says the woman they are trying to help spoke her name. 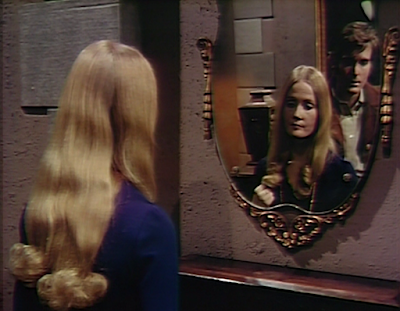 Julia returns to the old house, and is delighted to see Barnabas. She hugs him. He is unemotional. She asks how he got back from the past, and he tells her it was the I Ching. She says she thought that wasn't possible, and he says that it was, and here he is. 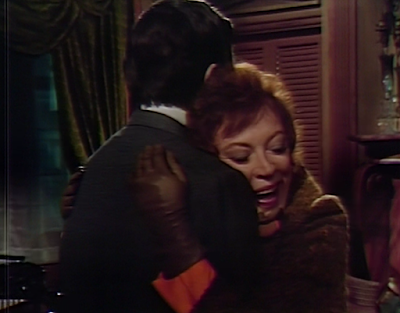 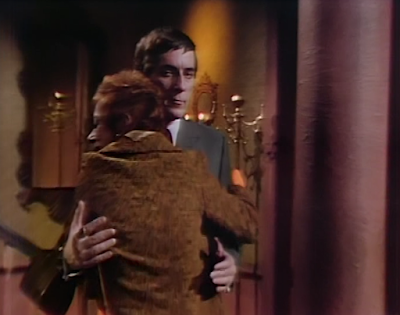 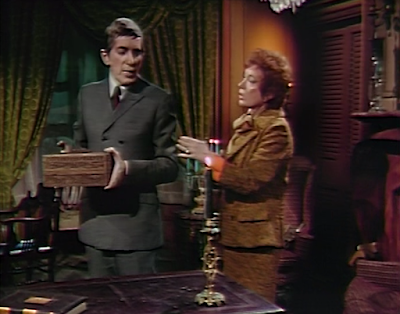 Stokes thanks Carolyn for coming. He introduces her to Sabrina. She says she must speak to Carolyn alone. Stokes says he must hear what she wants to say, and Sabrina just repeats the word 'alone.' Stokes leaves them, and Sabrina asks if she's really Carolyn Stoddard. She says her brother Ned told her about Carolyn. She tells her that she's in danger, and Chris Jennings loves her, but will try to kill her. Carolyn asks why. Sabrina has difficulty speaking. When Carolyn goes to get Stokes, Sabrina grabs her arm and says she mustn't tell him anything. Carolyn agrees, and leaves the room. 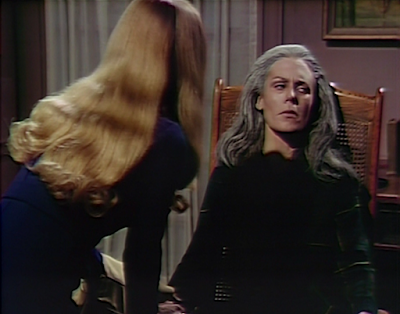 Julia tells Barnabas that she may have found a way to help Chris Jennings, who has returned to Collinwood. She says she believes Charles Tate may still be alive. Barnabas says that even if he was, he would be nearly 100 years old and useless. Chris bursts in and says that Carolyn has gone to see Sabrina. He's surprised to see Barnabas. Barnabas says that he found no solution for Chris' affliction, and there's nothing he can do for him. He excuses himself and goes upstairs. 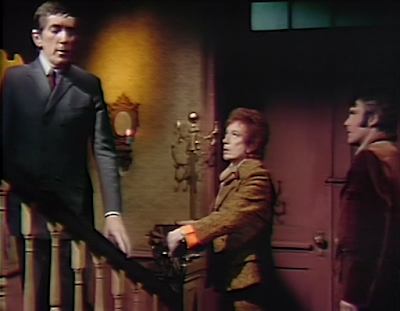 Chris can't believe it. Julia says Barnabas has undergone a frightening change. She says Barnabas lied to him. He said he returned using the I Ching, but if he had, he would have been locked in the cellar. She sends Chris to the cottage, and decides she must find out what's in the box Barnabas brought back from the past. 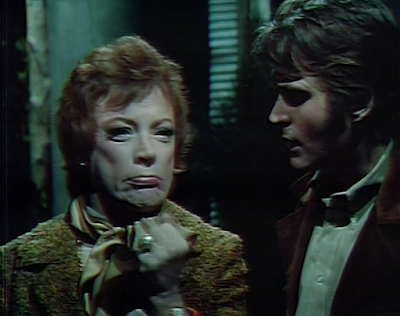 Back inside the old house, Julia finds the box and lifts it up. She hears breathing coming from within it. She puts the key in to open it. 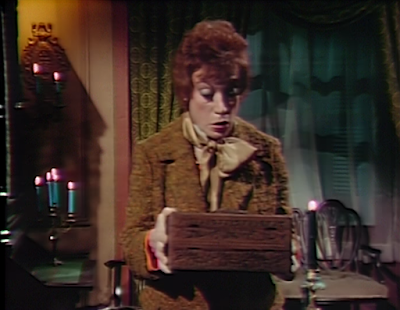 John: Sabrina sure seems to be play acting, since she pops in and out of her trance-like state when it suits her. But after getting Carolyn to show up, was it really only to tell her she was in danger, without any explanation as to why?

Christine: Is it my imagination, or did they use the lightning sequences from Frankenstein? I had to go back to revisit the Sabrina episodes since I had already forgotten where we left off with her. I wonder how long before we see her crazy, abusive brother, Ned. It was funny how Chris Jennings said the padded cell was making him stir crazy and Julia said it was insane for him to leave it. Someone was having a bit of fun with the dialogue today.

John: I love how stilted and dismissive fake Barnabas is. He clearly has some awareness of Barnabas' memories; you'd think whoever is in there might make a little more effort to convince folks that he truly is the Barnabas they know and (in Julia's case) love. 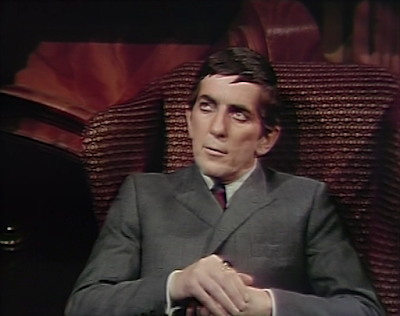 Christine: It's hard to tell if it's a sense of superiority or lack of awareness that underlies his inability to exert himself to act more like pre-Leviathan Barnabas. I love how he claimed Tate would be useless at 100 when he's close to 200 years old himself, perhaps even older if he's a Leviathan now.

John: The only thing we know for certain is that it's not Gwyneth Paltrow's head in the box. Could it be Barnabas' true spirit trapped in there, while his body is possessed by someone else? Can't wait to find out what these Leviathans are up to!

Christine: It doesn't seem prudent to open a box that is respiring, so I hope Julia is successful with that. Perhaps the invocation Barnabas repeated from Episode 887 is a clue:


The water shall nourish each grain of sand, wedged between ancient sacred stones, and guide us to the threshold of a time to be, and restore our flesh and bones.