Back inside the old house, Julia finds the box and lifts it up. She hears breathing coming from within it. She goes to open it when Barnabas shouts at her. 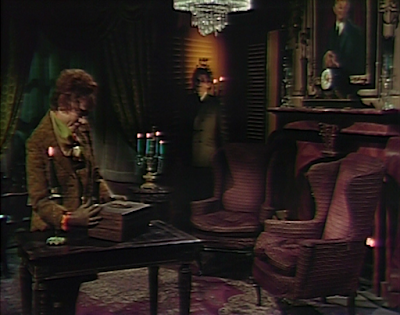 He tells her to get her hands off of the box and get out of his house. She says something is wrong with him; that they have been friends for too long. He tells her to go, and says she must give up her belief that she has a right to know everything about him. She refuses to leave. She says he owes her, and he says he owes her nothing. He says he has lost all patience for her, now that she has betrayed him. She asks what has changed him. She says she can't forget how close they've been, and he can't blame her for wondering what has happened. 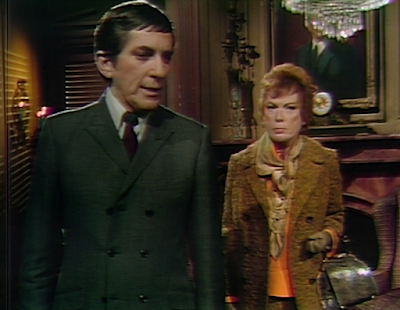 He asks her forgiveness, and blames time travel. He says his mood may be his reaction, and says that they are old friends. That somehow convinces her that he's back to normal. She says she thought she heard breathing in the box, and he says she has an overactive imagination. 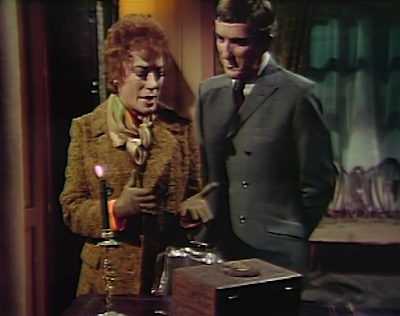 Carolyn rushes in and is surprised to see Barnabas. She hugs him. He says he's back, and his old self again. He asks what she's been doing since he was away. She's visibly upset, and says she won't bother them about it now. Julia presses her, and Carolyn says Sabrina Stewart sent for her. She warned her about Chris. Julia asks what she said. Carolyn says she told her that Chris Jennings would kill he. Julia asks why, and suggests Sabrina may just be jealous. Carolyn says she believes her, and Barnabas tells her to trust her instincts. 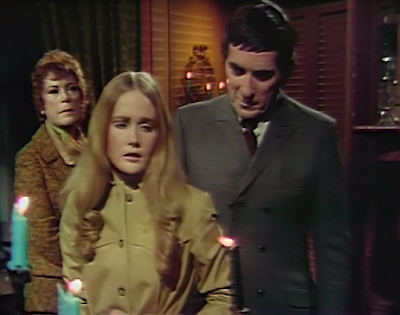 At the antique shop, Megan says she wants to call Julia. Philip tells her it's just a telegram. She calls Julia and invites her to stop by the shop to talk about the Tate painting. Julia agrees to come see her tomorrow. 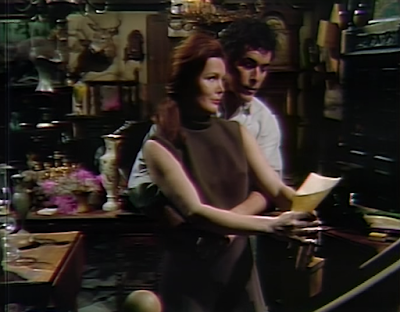 Barnabas looks at the box, thinking that Julia is too curious, and realizing that others will be, too. He wonders if he'll know it is the time... 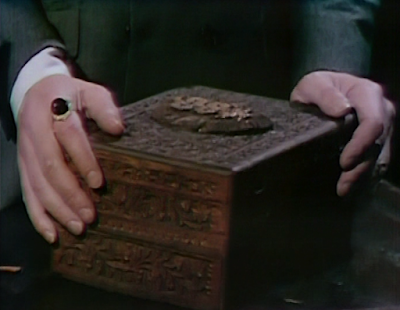 In the antique shop, Philip lowers the price on an antique rocking cradle when Julia arrives. They tell her that they received a telegram last night from someone interested in buying the Tate painting she bought, noting that money is no object. Megan asks if she's interested in selling. She says she's not, but she's interested in talking to the interested buyer. 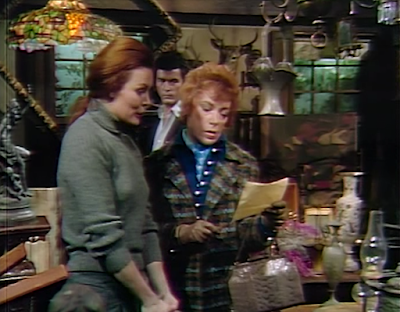 Carolyn is in the drawing room when Barnabas arrives at Collinwood. He asks how she is doing, and she says that Chris called him, but she didn't take the call. She wonders what Chris could have done. She wonders if he's hiding something, and Barnabas says she should assume that. She says she has felt that she's falling in love with him several times, and Barnabas says that would be a mistake. He says he has a gift for her. He says he found it at the old house, but doesn't know where it came from. It's a pentagram. He tells her to wear it—always. He asks if she will, and she agrees. He says it's a good luck charm that will perhaps bring the love that she so deserves. She asks if he thinks she should not see Chris, and he says he does. He says that Sabrina is not just jealous. 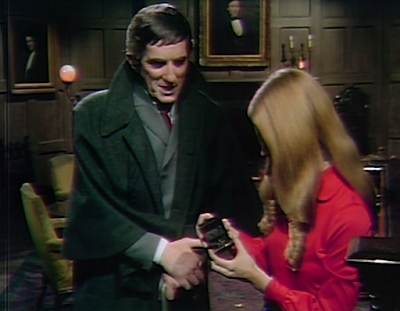 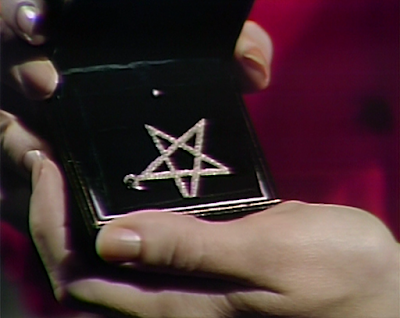 Julia is poking around the antique store when Carolyn arrives. She says she needs a small silver chain for the pentagram. Julia asks where she got it, and she says it was a gift from Barnabas. Julia hurries out of the store. 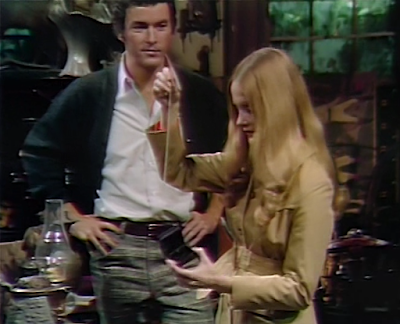 Julia asks Barnabas why he gave Carolyn the pentagram. He tells her that it's to protect her from Chris, who may change independent of the status of the moon. She says they could return him to Windcliff. He says she can do what she wants, as he's too busy. She asks if he's too busy to hear about Quentin. He asks what she knows about about Quentin. She mentions the telegram, saying she thinks Quentin could be alive and looking for any Tate portraits. Barnabas says it's unlikely, noting Quentin is probably dead, and tells her to leave. Upset, she asks what happened to him before walking out of the room. 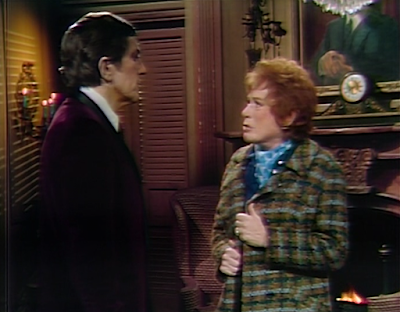 Barnabas holds on to the box and realizes that it is time. 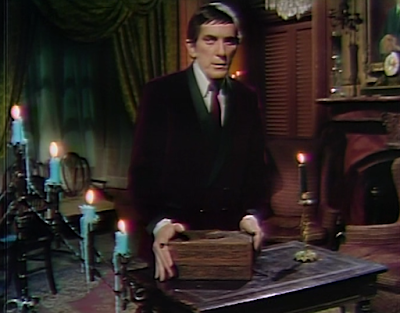 Barnabas falls asleep next to the box. In a dream, he is back at the altar. He sees Oberon, and asks for his guidance. He asks how he will know when he finds the chosen ones. Oberon says that one will wear the sign of the Naga. He says strangers will come to him, but he will know them. Barnabas says he will know to trust them, and lead them to do what they must do. Oberon reiterates that he will know. Barnabas wakes from the dream to the sound of someone knocking at the door. He realizes that the chosen ones have arrived. 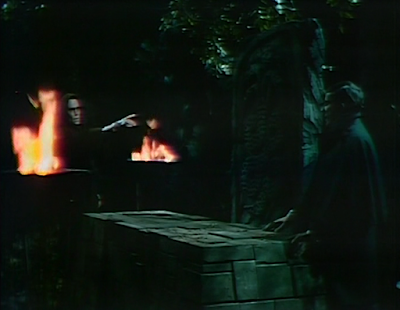 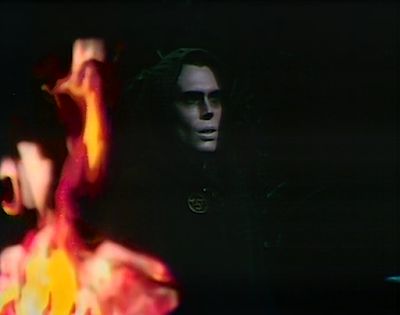 John: There are so many unanswered questions, not only from 1897, but from the 1969 we left behind. Is David okay? Should we assume that Quentin is alive and that's why he was no longer haunting the old house? We need to catch up with a lot of folks before these loose ends will be tied up.

Christine: I had hoped these matters would be resolved by this point in the week, but it appears they are going to leave us hanging a little while longer. I thought it was funny that Julia claimed that in the past Barnabas would have understood why she was doing something he disapproved of her doing. I guess she forgot about all those times he choked her when she did something he didn't like.


John: Ah, Julia 'Sherlock Holmes' Hoffman is at it again. Someone else is interested in a Tate painting, and from a small town like New York, so it MUST be Quentin!

Christine: Leviathan Barnabas sure turned on a dime, pulling himself together to schmooze Julia and give Carolyn a warm welcome after acting cold and emotionless. There is something suspicious about his efforts to turn Carolyn against Chris. 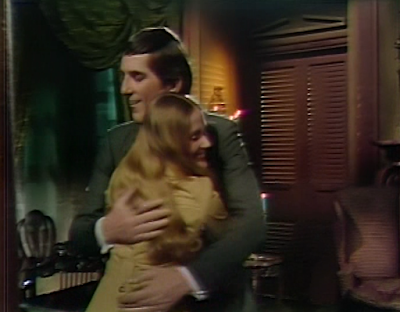 John: Sounds like we should find out next week who the chosen ones are. Unless it's just Avon calling... I'm curious when we'll see Paul Stoddard again, but more importantly, when he'll be reunited with his wife!

Christine: I can't wait to see who the Chosen Ones are. Will we meet new characters, or will they be ones we already know? Speaking of new characters, I like Philip and Megan Todd, but they seem somewhat out of place. Where all the other characters have a more timeless quality, even with their trendy neon fashion, the Todd's seem firmly rooted in 1969, reminding me of Darren and Samantha Stevens.