Barnabas examines the burnt remains of Tate's studio. He finds a watch that belonged to Petofi and Blackwood's chain. He then finds Petofi's glasses outside, and when he stands up, a hand clutches his shoulder. It's Tate. 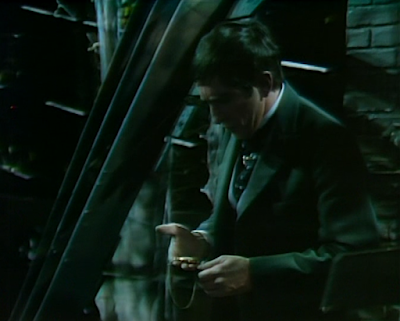 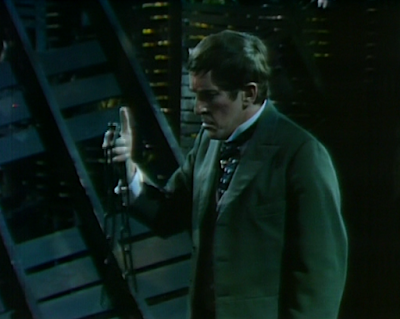 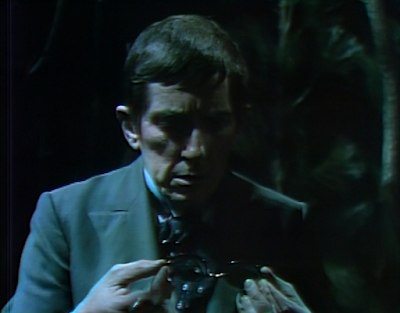 He blames Barnabas for destroying his studio and his work. Barnabas apologizes, but says he can't go until he knows Petofi is truly gone. Barnabas asks him if the portrait of Quentin was there. Tate admits to having stolen it, and says it was in the studio. Barnabas realizes what that means for Quentin, and tells Tate he must paint another portrait of Quentin. Tate says Quentin isn't his favorite person, but he asks if 10pm that night works for Barnabas. 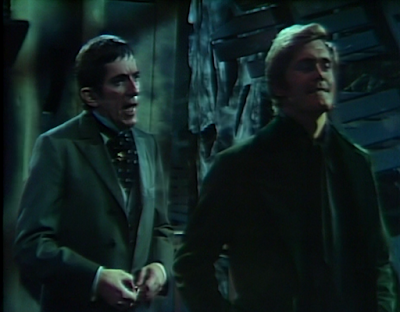 Trask is down to his last candle. He recalls putting students in a dark room where they would be afraid. He screams to be let out. 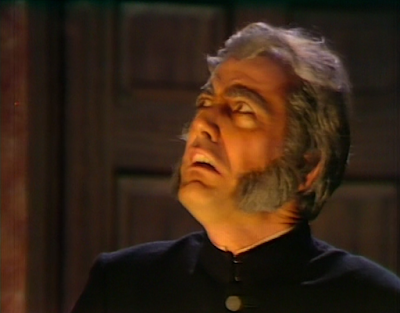 The phone rings, and it's Judith. He tells her that murder is evil, and she tells him that he shouldn't have killed Minerva. He says he didn't kill anyone. He tells her he's cold and hungry, and he doesn't deserve this. 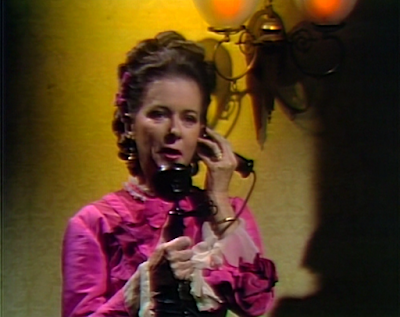 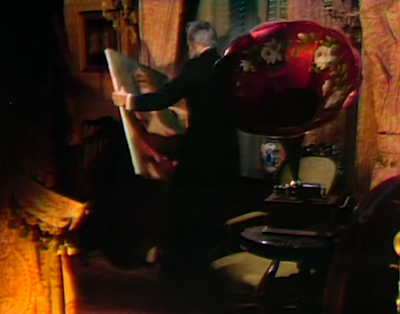 Quentin finds Amanda in New York and he says they can't be together until he finds a portrait. She thinks he's making an excuse not to stay with her. He says he will hurt her more if he stays. 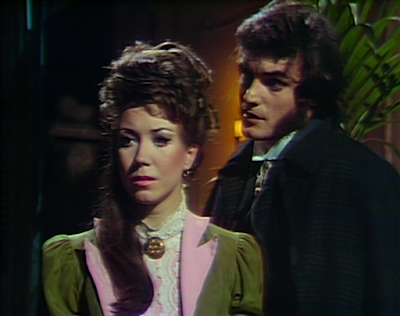 Kitty brings her bags downstairs, when Judith finds her in the foyer. She tells her she's leaving Collinwood forever. She explains that she hasn't told Edward, and she doesn't plan to. She says she's suffering from a condition and he's better off without her. She takes off her ring and gives it to Judith. 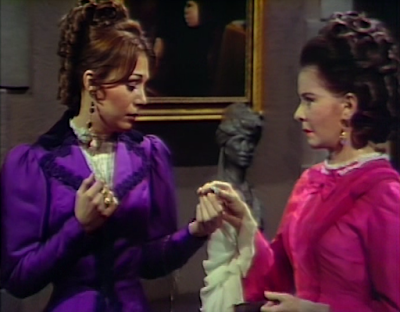 Judith goes to the carriage house to arrange for someone to take her to the station. Kitty tells the portrait of Barnabas that she's leaving, and begins to hear the music box play. 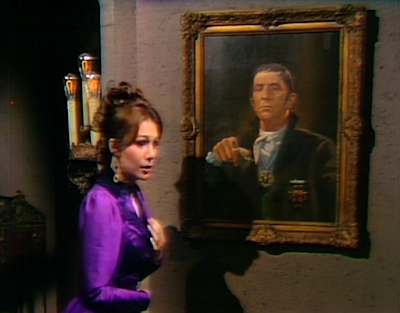 Judith writes a letter to Tim, telling him her plan is coming along. She says she wants him to remove the bricks and panel the anteroom so it it sealed off forever.

Kitty is in the old house, where she tells the portrait of Josette that she's leaving. She says she has to forget Josette. The music box plays again. The portrait of Josette speaks to her, telling her that she must forget Kitty. Barnabas comes in and tells her not to run away. He says he wouldn't do anything to harm her. Kitty says he has to let her go. Barnabas asks her to marry him. She says she understands what she must do, and agrees to marry him. Barnabas says he'll arrange it for this evening. 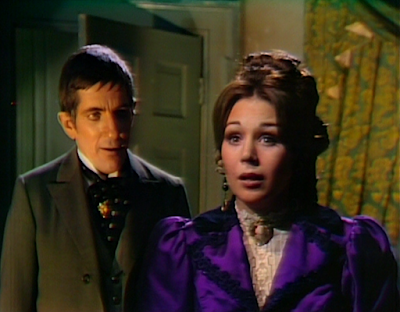 Trask watches his last candle burn out. He asks Minerva to come to him. The phone rings again, and Judith asks if he misses her. She tells him there's something in the top right drawer of the desk.  He checks the desk drawer and finds a gun, 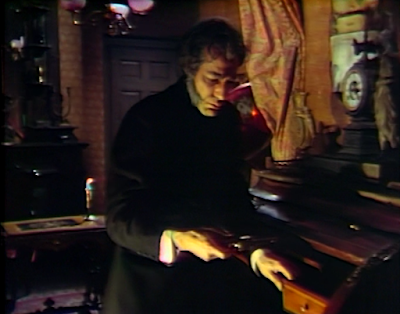 Judith sees Kitty's luggage is still in the foyer, yet there's no sign of Kitty. Barnabas arrives and tells Judith that he knows where Kitty is, and she has agreed to marry him. He says that after the ceremony, he'll come to tell Edward, and then they will leave Collinwood 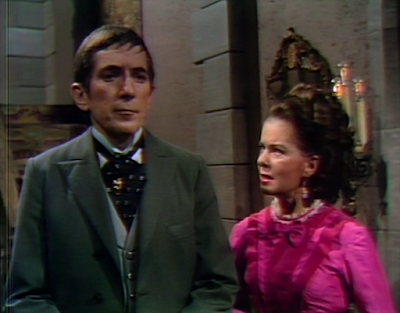 Kitty continues to be conflicted. 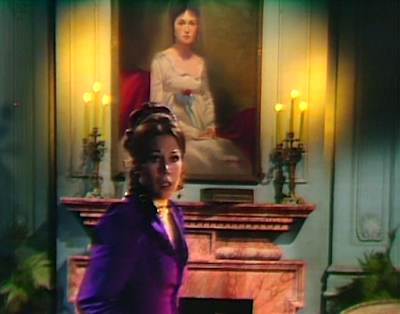 Barnabas returns to Tate's studio, and finds a note. It says it was time for Tate to move on. 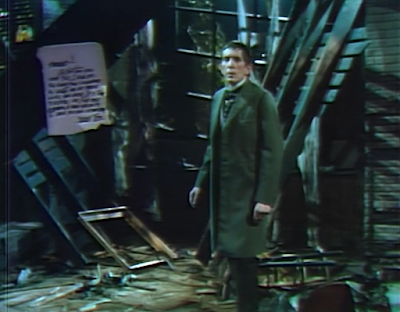 Judith calls Trask but there's no answer. It appears that he shot himself. 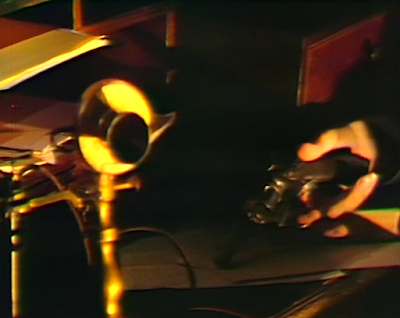 Kitty opens a trunk and finds Josette's wedding dress. She says she can't put it on because she'll become Josette forever.

Barnabas works his way through the woods when he hears the voice of Kitty telling him to hurry.

Kitty is now wearing Josette's wedding dress, and slowly being pulled into her portrait. Barnabas arrives just in time to reach for her hand before she is completely absorbed into the painting. 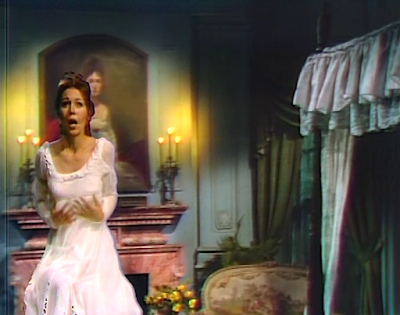 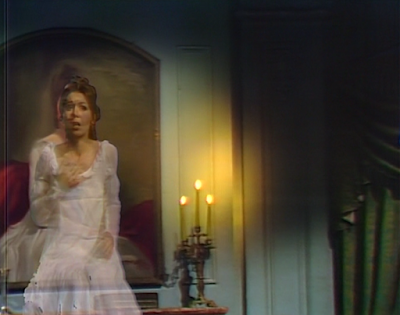 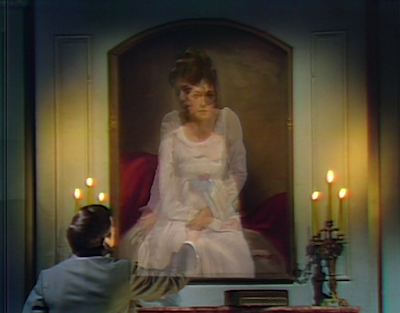 John: So did the fire actually claim any victims (other than Tate's belongings). I'm willing to accept that Blackwood might have disappeared without a trace, but there would definitely be bits of Petofi left had he died in the fire.

Christine: All other loose ends seem to be getting tied up, so why would they leave us hanging on this one? Could it mean we'll encounter Andreas Petofi when we return to present day Collinwood?

John: After the whole trip to NY, Quentin meets up with Amanda just in time to let her know that he won't be staying with her. Were the writers honestly not thinking about where they were taking the story?

Christine: It seems like the writers just found out that our time in 1897 is coming to a close, and they needed to wrap things up quickly.

John: In a mere matter of minutes, Kitty goes from turning down Edward's marriage proposal (without even telling him) to accepting Barnabas's. Something tells me it won't be a match made in Heaven.

Christine: That really didn't make any sense at all, since Kitty was definitely not into Barnabas. It looks to me like he'll have to marry the portrait. The best part of this episode was Judith tormenting the whimpering Trask, and seeing him end up in the chair where David and Amy will later find what they believe to be Quentin's skeleton in Episode 645. Of course, it doesn't explain why the skeleton is wearing a vest, rather than Trask's black robes when they discover him, or why Quentin's ghost was tormenting them in the first place. Perhaps it will all be revealed when we return to 1969. 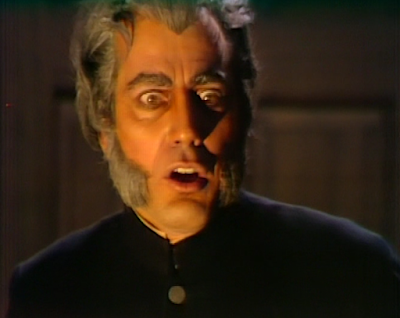