Blackwood arrives at the Mill, and calls for the surrender of Aristede. He tries to run away, but Blackwood grabs him and says justice must be done. Aristede tells him that after he kills him, the ones who brought him back will destroy him. Blackwood says he will kill them after he takes care of him. 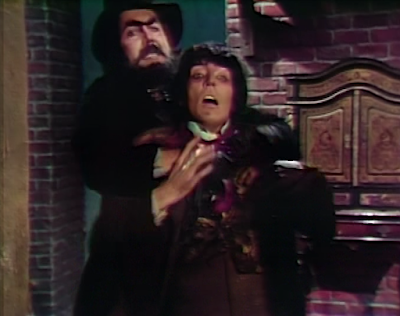 Tate arrives at the Mill in time to hear a scream, and then a voice yells that the prisoner is executed. He hides in the shadows as Blackwood emerges and leaves, and then he enters the Mill. Inside, Tate finds Aristede dead. 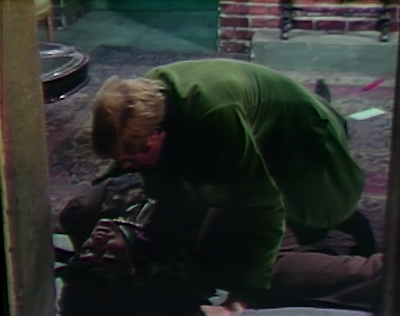 Petofi pours himself a drink and toasts Aristede. Tate says that Aristede wasn't the only one Blackwood killed. He says he found a dead woman's body. Petofi asks why he should care, and Tate tells him that the woman was a gypsy. Petofi is concerned, wondering if Aristede told them where he could be found. He gets up and says he must go to the future now. He says he'll go as Quentin Collins. Tate reminds him that they've got their own bodies back, and Petofi brandishes his withered hand. 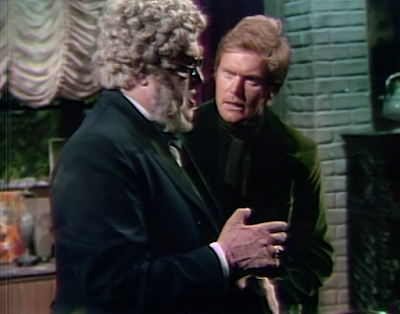 Tate asks him about sending Blackwood back to hell. Petofi doesn't care about Blackwood. Tate says he also killed Evan, and he doesn't know who he'll strangle next. Petofi reiterates that he doesn't care. Tate asks what he should do, and Petofi tells him to lock his doors and windows. He says that he's of no importance to him. The door bursts open and Blackwood enters. He says they are both his prisoners, and the penalty is death. He grabs Tate and Petofi demands that he release him. He shakes his withered hand at Blackwood, and he does. 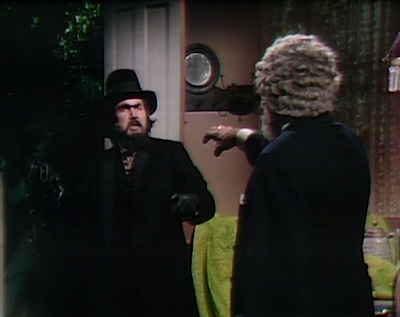 Petofi tells Tate to get his gun, as he doesn't know how much longer he can hold him. Blackwood is free of Petofi's control, and Tate fires at him. He falls to the ground, and Petofi tells him to tie him up. Blackwood says Tate has committed the ultimate crime, for which he will die. Petofi says he can wait and watch him die. 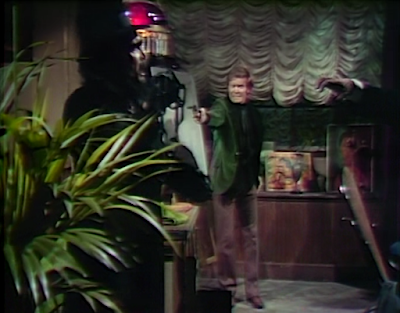 Blackwood gets up and says they are both sentenced to die, and he will carry out the sentence later. He drags himself outside. 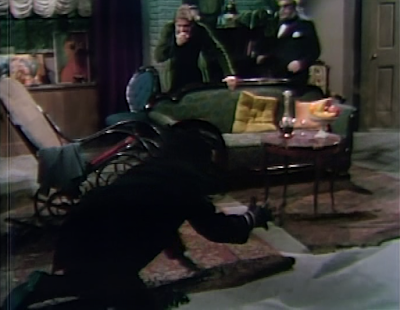 Quentin is in the drawing room, tired. He's flipping through books when Charity comes downstairs. She realizes that it's really Quentin, and she's happy to see him. He says he won't beat Petofi until he leaves Collinwood for good. He tells her he'll be gone within a day. She says she wishes he didn't have to go. She says she would have given up her career for him. He says he wouldn't ask her to do that. He shows her a photo of when he was a boy, and she asks if she can keep it. She offers to give him a photo of her, Pansy Faye. 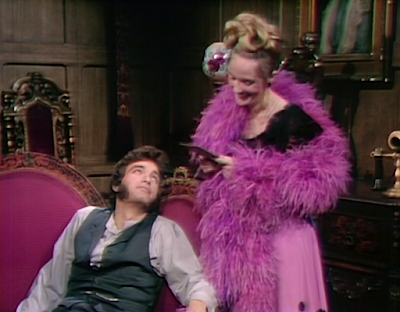 Petofi tells Tate that he'll enter a deep trance and change places with Quentin as soon as he falls asleep. 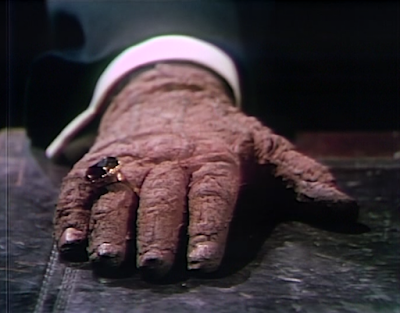 Charity suggests that Quentin should go to bed, and he says he has to get his life in order now. He sends he upstairs and tells her he'll come to say goodbye before he leaves. He fixes himself a drink and sits by the fire. 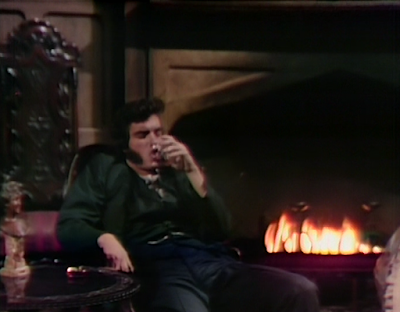 Petofi remains in a trance, waiting.

Charity is in bed, thinking about Quentin. She realizes that someone will stop him, and tries to see who it is. She pictures Quentin falling asleep downstairs. She then sees Tate enter the drawing room, and then Quentin arise and tell him it was just like he said it would be, after Quentin fell asleep. She sees him take the I Ching wands, and prepares to use them in Collinwood. Charity realizes there's no time to lose, as the minute he falls asleep, Petofi will enter him. 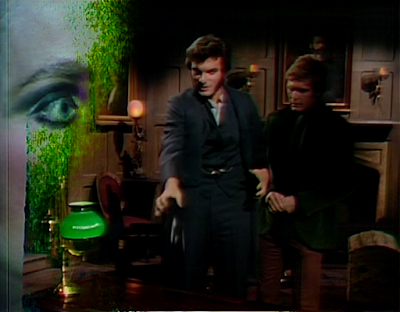 Downstairs, Quentin begins to drift off to sleep. 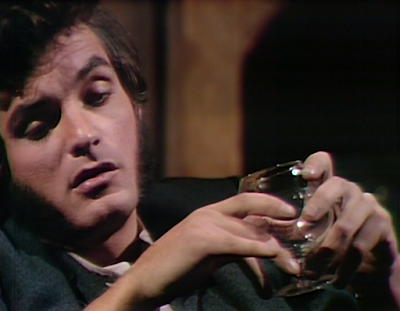 John: A few stray references to it aside, Petofi seems to have fully recovered from the knife wound he just received a few short days ago.

Christine: That's the power of the Hand for you. It can kill, maim, control, and allow Petofi to swap souls at will, so it's no surprise it can also heal.

John: I love that when he attempts to shoot Blackwood, Tate pulls the trigger on his gun several times before we get a gunshot sound effect. Fortunately, Blackwood doesn't drop prematurely; only after we finally hear a gunshot. Not that it keeps him down long, though I can't for the life of me figure out what he left to do that he felt was more important than killing his two cornered prisoners 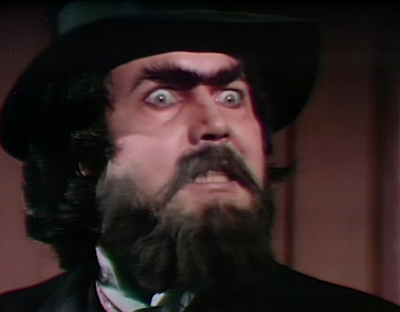 Christine: That was a disappointing scene. Blackwood was apparently too weak to kill them as demonstrated by the way he could barely swing his chains in his telltale manner. It was also disappointing to see Blackwood allow his primary target. Aristede, a few moments to plead for his life, when he has strangled everyone else he could get his chains on without any hesitation. I was hoping Tate would think to go rip up his sketch to try and dispatch the demon.

John: So it's certainly setup to look like it will be Pansity to the rescue, although once again, Petofi's notion that he can just think his way into Quentin's body asks a bit much of this odyssey.

Christine: Angelique keeps going to ground at the most inopportune times. I wonder where she's hiding out while all this is going on. I'd expect her to be around to help save Quentin from Petofi. 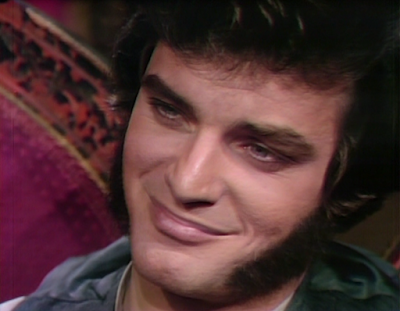