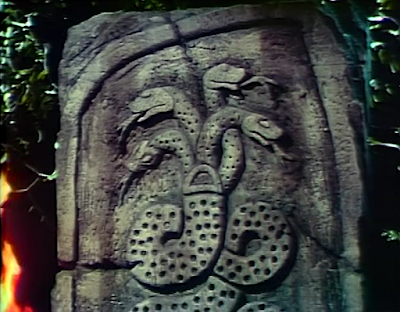 Barnabas is lying atop an altar. Two cloaked figures approach him and a woman places leaves under his head. The man says he will know them when he rises from this sleep, and he will show them the way to a new and everlasting life. 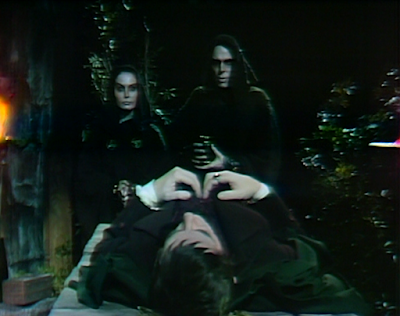 The man lifts Barnabas' head and pours something from a goblet into his mouth. He then begins a ritual, and waves his hand over Barnabas. Barnabas rises from the altar. Barnabas waves his hand and continues the ritual. The figures introduce themselves as Oberon and Haza. 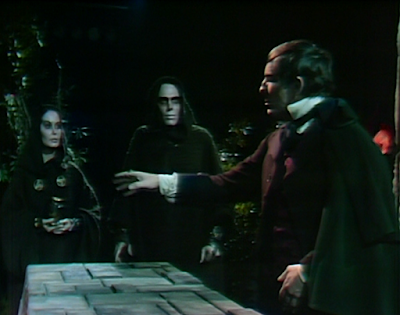 They bid him well, and call him master. He says that before he leaves, they must do something. He asks if they have the ancient book, and if they have made the necessary preparations. They assure him that they have. The woman hands him a Leviathan box. He says it is all he can take, but he says they will be with him in spirit. He asks how he shall know the chosen ones. Haza says he will find it in his dreams. He asks if there's anything else he must know before leaving. Haza says their task is done, and there is nothing more they can do. Oberon says they will soon herald the arrival of a new and powerful leader. Barnabas says the box must not be opened before that time. He says that which has been prophesied shall become reality. 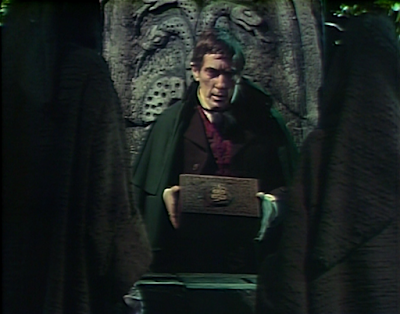 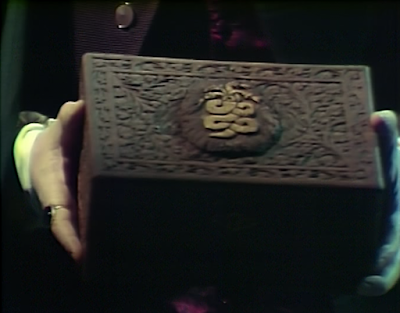 In the old house in 1969, Julia reviews a journal describing how she returned from the past a month ago, and has since received no signs from Barnabas. She thinks Barnabas is trapped in the past, and lost to her forever. Outside the window, a figure watches her. 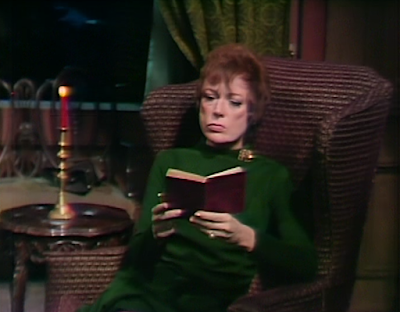 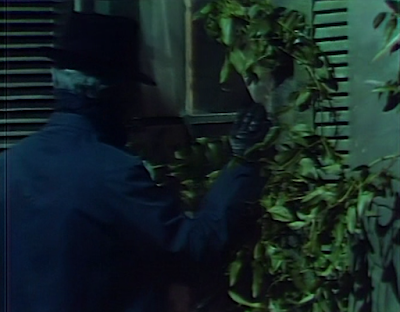 Julia writes in her journal that she will not give up hope. She blows out several candles and leaves. After she's gone, the strange figure follows her.

Julia is in the woods on the way to Collinwood. The figure continues to follow her.

Carolyn is in the drawing room when Julia arrives. She's wrapping a gift for her mother; a piece of colonial jewelry she bought at a new antique shop in town. She tells Julia that she has become depressed, but she doesn't know why. She says she feels that something frightening is going to happen. She asks Julia why she goes to the old house every day, and Julia says she's convinced that Barnabas will return. She says that Julia is very fond of Barnabas and she admits that she is. 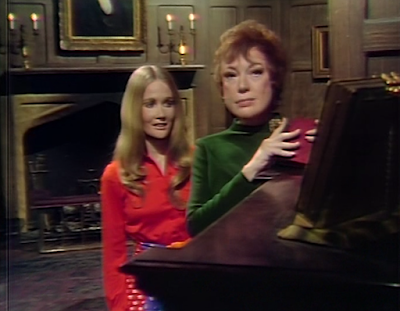 Carolyn invites her to come with her to the antique shop tomorrow. She agrees. Carolyn goes to fix her some tea. Alone in the room, Julia hears Charity and Magda speak of Barnabas. Charity says Barnabas and Kitty ran off to the old house together and disappeared. Charity asks Magda if she knows where Barnabas is. Charity says Edward saw them go into the old house, but couldn't find them inside. Julia calls to Charity. Carolyn runs in and asks what's wrong. Julia tells her that she's sure Barnabas is dead. 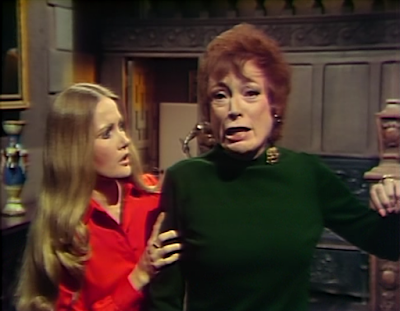 The altar appears in the woods in 1969. The stranger stands before it, and then moves on. 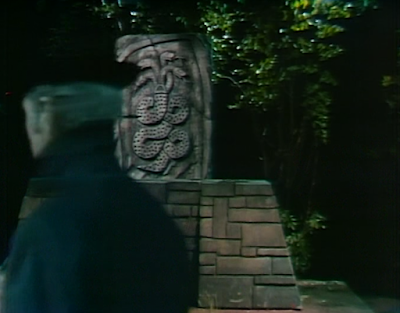 The stranger enters the old house. He lights a candle.

Carolyn brings Julia some tea. She asks her what happened. Julia describes hearing voices from the past. She says they say Barnabas disappeared from the old house. Julia says she was wrong to think that meant Barnabas was dead. She says if he did disappear, he must be on his way back. She rushes out to go to the old house. 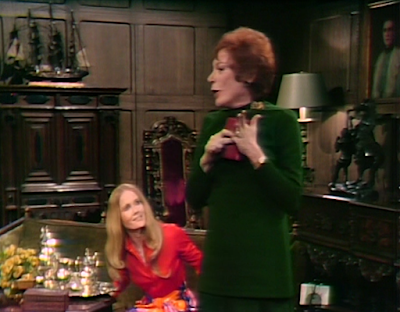 The stranger looks at the portrait of Barnabas. Julia arrives at the old house and sees someone through the window. 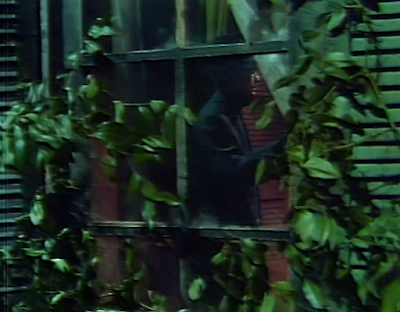 Inside, the man puts the candle out. He steps outside, where Julia stands with a flashlight. She asks who he is. 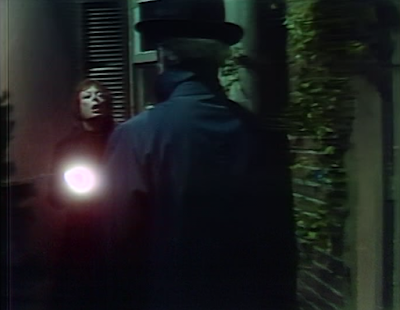 John: I was excited to meet Oberon and Haza.. I hope they weren't just here for two episodes and done! And are we done with 1897? Is Petofi dead? Is Quentin a werewolf with the portrait destroyed? So many as-yet unanswered questions! 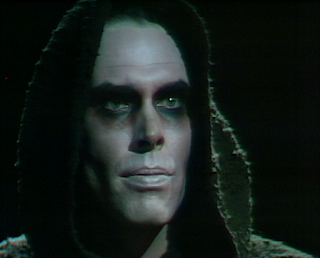 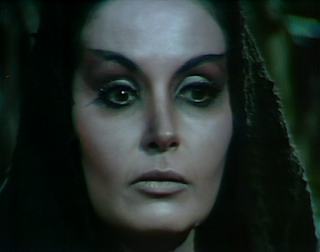 Christine: I do hope we'll get answers to those questions and that they won't just move on without resolving matters from 1897. Also, where has Magda been all this time and why did she suddenly show up to gossip with Charity about Barnabas running off with Kitty?

John: There's certainly no doubt that we're back in 1969—Carolyn's wild skirt confirms that! 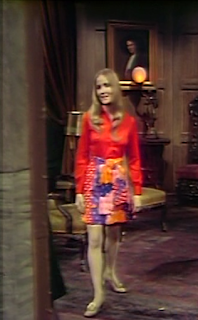 Christine: I'm trying not to stare too long at that outfit since I think it might cause seizures. Thanks, Ohrbach's! Carolyn seems out of sorts after visiting an antique shop. Could this mysterious new shop have some needful things in stock? I hope it has strange portraits for sale and that we'll get to visit it soon.

John: So we'll set aside the question of who the mysterious stranger is until tomorrow, but more importantly, is Barnabas Barnabas? Or has he too been possessed by someone? And if he has, is it someone we already know?

Christine: The sideburns on the stranger initially had me thinking it was a relative of Nicholas Blair, but the brief glimpse of him through the window of the Old House proves it was not. I also wonder if Barnabas is possessed, or if he is truly a primordial creature whose essence has been awakened, or if he's possibly a Bizarro Barnabas. It's been quite a jarring return to present day Collinwood. 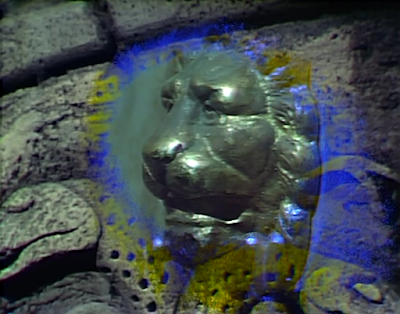 Oberon's Invocation
The past is but the beginning of the beginning
and all that is and has been is but the twilight of the dawn.
A day will come when beings, which are now latent in our thoughts and hidden in our loins
shall stand upon this Earth as one stands upon a footstool,
and shall laugh, and shall reach out their hands amid the stars.

Barnabas' Invocation
The water shall nourish each grain of sand, wedged between ancient sacred stones,
and guide us to the threshold of a time to be, and restore our flesh and bones.