In the drawing room, Barnabas tells Angelique that he knows how he feels. Trask bursts in and calls out, "Die, witch!" before shooting her. Barnabas wrestles the gun away from Trask and says he should have killed him before. He drops him to the ground and calls to Julia. 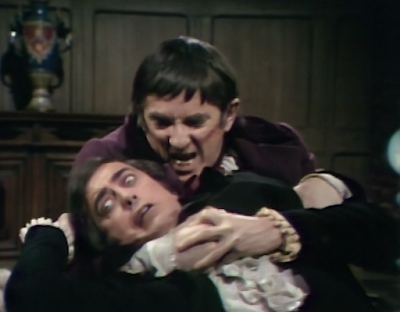 Angelique asks him to hold her, telling him she's dying. He tells her that he loves her. She dies in his arms. 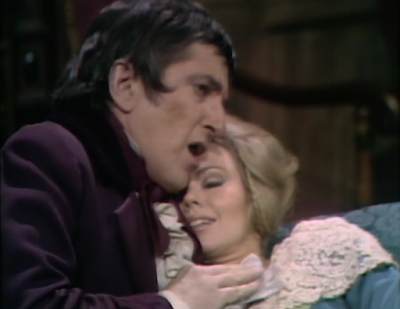 Trask starts to get up, and Barnabas grabs him. Trask runs upstairs and Barnabas follows him. He finds his way into a room and grabs a letter opener. He stabs Barnabas with it, but Barnabas sticks it in his belly. Trask wanders into the room in the East Wing and is transported into parallel time. Barnabas sees him, and then watches as he disappears when the room reverts to being empty. 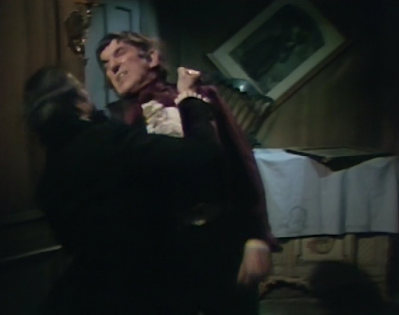 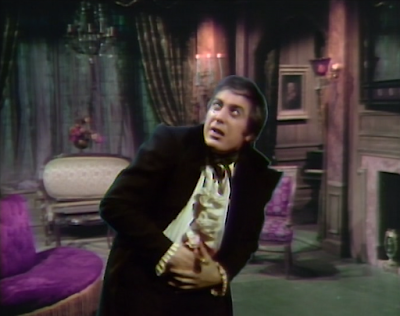 Barnabas comes downstairs and picks up Trask's gun. He lays it on a table and kneels beside Angelique's dead body. He tells her that he was so often blinded by his fury, yet beneath his rage was a love as strong as hers. 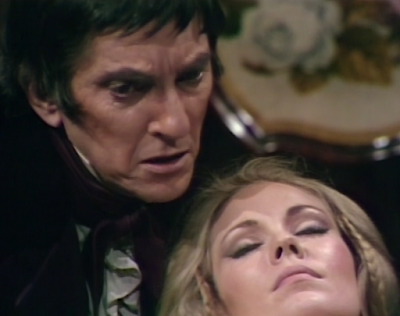 Julia comes in, and he tells her that Angelique is dead. He says Trask killed her before she knew that he loved her. He explains that she was his only love, and she never knew. She asks what happened, and he says Trask attacked him, and has disappeared into parallel time. 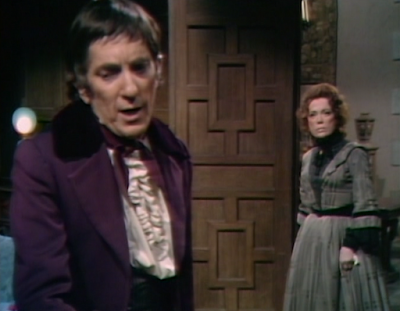 Desmond wonders where Leticia is. Flora says she doesn't know. She's just pleased that he is free. She chides herself for falling for Gerard's charm. She says that at least he brought them Leticia. Leticia returns and she and Desmond embrace and kiss. Flora leaves them. He asks where she has been, and she says she's been walking on the beach. He tells her that they're leaving Collinsport to get married in New York. 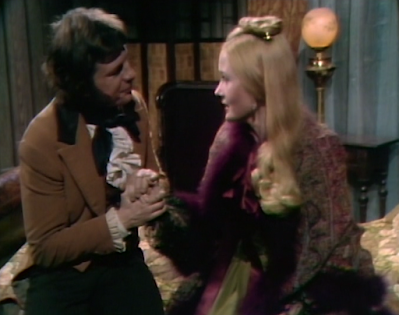 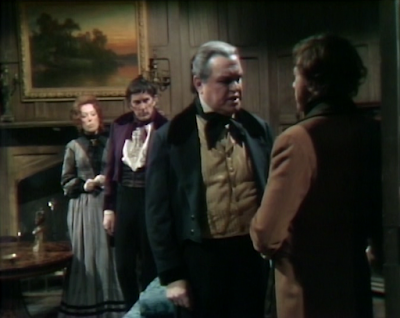 Desmond is amazed to hear about the room in the East Wing, after hearing about the stairs. Barnabas says he must stop Trask if he tries to escape from parallel time. Desmond assures them that if he escapes, he will deal with him. He says he will tell no one the secret but Leticia and Quentin. They say their goodbyes. He asks how he will know if they made it, and Barnabas says he must assume that they have. As they ascend the stairs, Julia asks what they should do if they return to Collinwood in ruins. At the top of the stairs, Stokes opens the door and the three step through into disco lights. 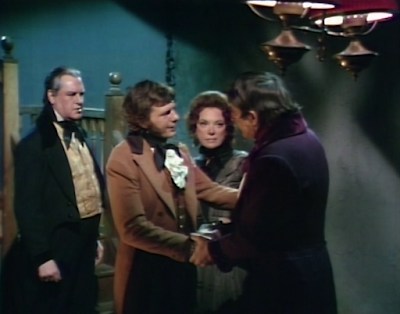 Barnabas, Julia and Stokes exit the stairwell. Collinwood is still standing, and Julia assumes they changed everything.

Two hours later, Barnabas dressed in 1971 fashions, Barnabas says they haven't seen a single person in the whole house. Stokes points out the refrigerator was full of food. Julia says there are no signs of the ghosts of Gerard and Daphne. Elizabeth walks in and tells them they're all late for opening of the historical center. She tells them to hurry. She says she returned to get Roger's speech. Julia asks if David and Hallie are there, and Elizabeth confirms it. Barnabas asks about Quentin and Carolyn, and she says they are there as well. She finds Roger's speech, and invites them to go with her. She mentions to Stokes that she found a journal from one of her ancestors, Flora Collins, in the West Wing that she's giving to the historical society tonight. Barnabas tells Julia that the ghosts of Gerard and Daphne never came there. He says the stairway is likely no more; destroyed by Desmond. 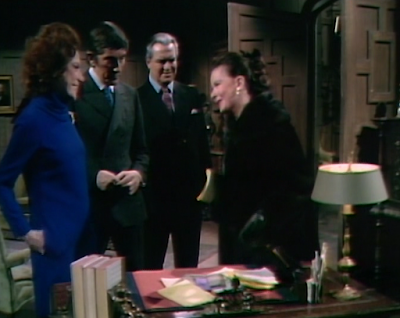 Desmond chops at the staircase, wondering if Barnabas, Julia and Stokes made it back to their own time.

Leticia calls to Desmond. He comes upstairs and she says she was worried about him. He tells her to come with her to the East Wing.

Leticia can't believe that Valerie is dead, and Trask is in another band of time. He tells her to wait until she hears the rest. He opens the door to an empty room. He stops her before she enters, and it suddenly changes. They see Trask, stabbed, calling for help. Leticia says that he's dead. She then sees Julia enter and call to Flora. Flora arrives and says it finally happened. What they've dreaded. Julia shuts the doors Desmond and Leticia are watching from. Flora says first poor Stella, and now this stranger. Julia goes back to the door and looks for anyone. She sees no one. She tells Flora they must get rid of the body. 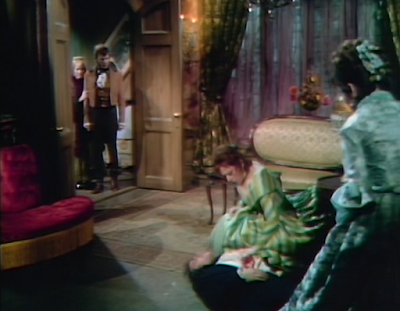 Melanie is looking for Julia. She calls to her mother. Flora appears and Melanie tells her that her father is dying. Julia says that the lottery will happen again before the week is over. 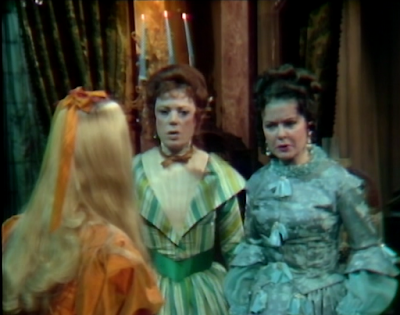 John: While tending to her wound, Barnabas was applying compressions to Angelique's chest like he was ringing a bell to call a servant!
Christine: It's interesting that Barnabas has finally realized that he loves Angelique. Think of all the trouble he could have saved the family if he'd admitted it much sooner.
John: So for all intents and purposes, it looks like on this day we saw the 'finale' of Dark Shadows. Chronologically speaking, anyway. And lest anyone think that 1840 parallel time would continue with any relevance to the show, Trask has up and died, and his body already disposed of. At this point, I'm doubting we'll even see any more of our time band in 1840.
Christine: At least we know there are two happy couples, the kids will survive, and Flora will go on to flourish as a novelist. Perhaps she'll go exploring in the east wing and get the inspiration to pen "The Collins Lottery."
John: I guess it's now safe to assume we'll ride out the remainder of the show's run watching this other soap opera play out. This is the way the world ends, not with a bang, but a whimper.
Christine: It is disappointing to be whisked away to a parallel past without spending some time with the present day Collins family.
Posted by John Scoleri at 6:00 AM

Oh yeah! I remember this! I was ten years old! If I haven't said it lately, thanks so much for this blog!