Samantha tells Gerard that Joanna is dead, and when he tells her that anyone can see that she's still alive, Samantha reiterates that she knows she's dead because she killed her. Gerard says that's impossible. He says he must know if it's true. He asks if she wants Quentin dead, and she says yes, and then no. She tells Gerard that she loves him. She says she didn't mean to do it, and now Joanna is back for revenge. Gerard demands that she tell him everything from the beginning.

She explains how she refused Quentin's request for a divorce. She says she thought she had won until the letters started to come from the asylum. One asked Quentin to come, but he was away at sea by then. She says she went in his place without telling anyone. She found Joanna in the garden, calling for Quentin. She approached her and Joanna asked if she came with a message. She said that her lover was coming to meet her soon — Quentin. Samantha asked her what she'd do if he never came. She added that Quentin had gone away for months, and may never see her again. Joanna told her that she hated her and tells her to leave. Samantha continued to torment her, and Joanna said Samantha never forgave her. Samantha realized that Joanna recognized her. Samantha told Joanna that she was not mad, just horribly cruel. Joanna told her that Quentin was coming, and dismisses her. 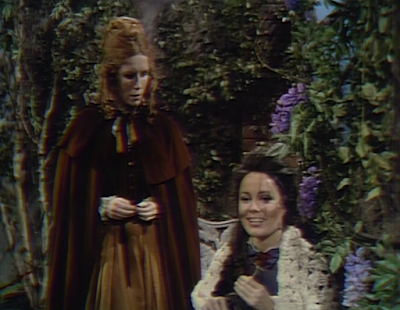 Samantha tells Gerard that she should have killed her then. She says that she got more letters, and she was sure Joanna was sane. She says she wrote Joanna telling her to meet her on the grounds. When she did, Joanna said she was expecting Quentin. Joanna told her that she'd never let Samantha keep her away from Quentin. She added that Samantha never cared for Quentin. Samantha told Joanna that she could never have him, and grabbing her, Joanna fell over a cliff. Gerard says that if it was high tide, she may not have died on the rocks. Samantha says she did die on the rocks, and she's come back to kill her. 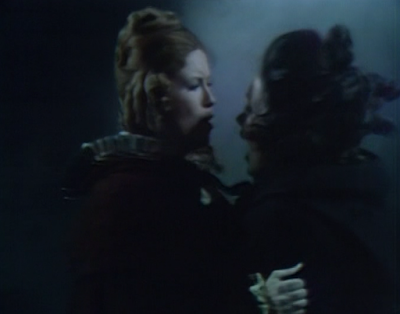 Daphne returns to Collinwood and sees Joanna at the top of the stairs. She's afraid that Joanna has come back for her. She screams, and Gerard comes out and explains that her sister is alive. Joanna extends her hand and Daphe takes it. She embraces her sister when she realizes that she's alive. Joanna and Daphne go upstairs.

Gerard tells Samantha that Joanna is not a ghost, but she's convinced that she's dead.

Joanna tells Daphne that she doesn't know how to feel; surprising everyone. Daphne tells her that she always made everything right. She says she's done it again, and it's good to have her back. She says she initially blamed Quentin for her death, but she learned he wouldn't hurt anyone. She points out how she was afraid when letters started to arrive in her handwriting. Joanna says that she never sent any letters. Daphne shows her one, and she says the handwriting doesn't match completely. Joanna explains that after she left the asylum, she went to Boston. Daphne asks if she's still in love with Quentin, and Joanna tells her that she was always a romantic. 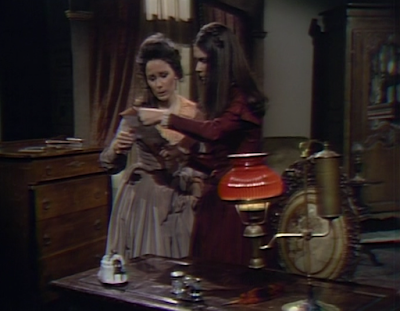 Samantha thinks Daphne and Joanna are plotting to kill her. Joanna comes into the drawing room and thanks Samantha for letting her see her sister. She introduces herself to Gerard before bidding them a good day and leaving. Samantha freaks out, and Gerard tells her to go upstairs and relax. She begs Gerard not to leave her. After she goes upstairs, he thinks that Joanna might be quite helpful with both Samantha and Daphne. He takes out his devil's sigil, and speaks into the fire, telling Daphne to dream of him.

Daphne grows tired and falls asleep. In her dream, Gerard tells her how much he loves her. She tells him that she loves and needs him. She says she wants him; that he is all that she will ever want. She wakes up and heads downstairs. She goes to a room and finds Gerard there. He tells her that it's time for her to make a very important decision, and asks her to marry him. 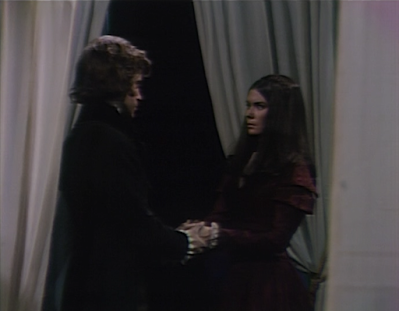 John: The whole Samantha-killed-Joanna story seems a bit far-fetched. People don't normally do well after falling off of cliffs in Collinsport, high tide or no. I'm still willing to believe that Joanna is actually some sort of spirit.
Christine: I believe the only other person to survive a fall from the cliff was Adam. Perhaps Dr. Lang is the one who has come back to life and reanimated her!
John: Considering that she believes that she killed Joanna, and almost killed Daphne in her bed, I do hope that Samantha will get her just deserts in due time. I can't wait for her to hear Gerard and Daphne's news!
Christine: Daphne hasn't agreed to marry Gerard yet. Her face says no. How many more occult inspired make out dreams will we have to endure before she finally agrees?
John: I was hoping that Daphne's feelings for Quentin would come up in conversation with her sister, but what can you do. Now that Gerard has finished with his dream-tinkering with her, and has actually proposed, perhaps she'll have forgotten about her feelings for Quentin?
Christine: It could be that she loves her sister enough to give Quentin up for her. Truly, I don't understand Gerardudah's evil plot in wanting to settle down with Daphne. Wouldn't you expect an evil warlock to want to have access to many women and not chain himself to just one? Not that being married will stop him from philandering, but why bother to get married?
Posted by John Scoleri at 6:00 AM