Daphne tells Quentin that she can't see him any more. She tells him that Joanna still loves him. He says that he and Joanna broke up. She can't listen to him. She says Joanna won't be right again without him. He asks if she's willing to sacrifice everything for her sister. She tells him that she doesn't feel the same about him anymore. He asks what she's going to do, and she tells him that she's going to marry Gerard Stiles. He can't believe it. He asks what made her change. She says he doesn't understand the hold Gerard has over her. He says he's not going to let her marry Gerard. He tells her that he's going to divorce Samantha when he gets out of jail. He asks Daphne when she last spoke to Joanna. She says it was this afternoon. He asks if Joanna told her that he loved her. She says she did not. He asks why she thinks Joanna didn't tell her. He says he knows her better than Gerard does. He asks what Gerard did to make her change. She says she would explain it if she could. He begs her to promise him that she won't do anything until he gets out. He tells her that he will be free soon, and Joanna will leave. 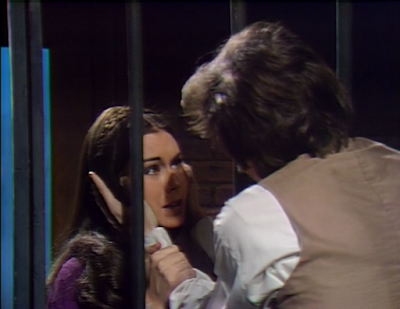 Mordecai Grimes reads a letter from Dawson saying he doesn't know if he should come to court or not. His son Jeremy reminds him that if Quentin is acquitted, then he's not a warlock. Grimes tells Jeremy that if Dawson doesn't want his testimony, other Jeremy son walks out on him.

Jeremy meets Carrie in the woods. He holds her and she says it's wrong. He tells her that she has to get over it. He explains that he has work to do during the day, so he can't come see her. She says he just wants her to listen to him, but he's wrong sometimes. He says he's not wrong about her, and kisses her. 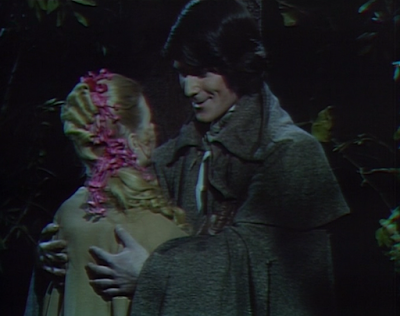 Daphne returns to Collinwood, and Gerard stops her as she heads upstairs. He reminds her that he hasn't asked his question about getting married. He says that he knows that Quentin would have her not do it. He says deep in her heart, he knows she will, and kisses her.

Gerard visits Quentin in his cell. He tells him that he's in love with Daphne. Quentin reminds him that he was in love with Samantha when he returned to Collinwood. Quentin says he seems to want his life, and he's well on his way, having the estate, and the fortune. Gerard says it will all revert to him when he's free. Quentin says he doesn't think Gerard has human emotions. He tells Gerard that he's not going to let him marry Daphne. He says he'll kill him first. Gerard can't believe it, hearing those words from his best friend. Quentin laughs at him, and tells him to get out. Gerard says he came to make him understand that falling in love is an involuntary thing, and if it's a crime, it's the only thing he's guilty of.

Jeremy tells Carrie that it's time everyone knew about them. He kisses her, and they enter Collinwood together. He says he feels right at home. They hear someone enter and he's surprised to see his father. Grimes sees him with Carrie, and tells him to come with him. He warns Carrie to stay away from Jeremy. His father tells him to say goodbye to her for the last time. He says he'll stop the two of them if it's the last thing he does. Carrie tells Jeremy to try and make his father understand. 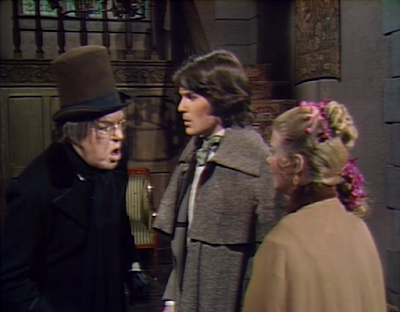 Gerard tells Grimes that he heard he came to Collinwood. Grimes refers to Collinwood as a house of corruption. Gerard says it isn't corrupting him, and Grimes says he heard as much from Trask. Gerard says he doesn't think Grimes' testimony will be strong enough. He adds that he found some evidence that he's sure would prove Quentin's guilt. He asks Grimes to incorporate this evidence into his testimony, without reference to him. He agrees. Gerard asks him to write a note to Dawson. He reminds him that it could be used as evidence in the trial, so it mustn't mention his name. He dictates the letter from Grimes' perspective, pointing out that he has found evidence of Quentin's guilt, and asking him to come see him immediately. Grimes finishes the letter and says his son will deliver it. Gerard says he'll be back with the evidence before Dawson arrives. Gerard leaves, and Grimes tells Jeremy to deliver the note to Dawson. 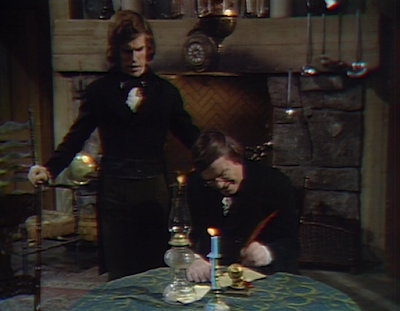 Carrie decides to go see Jeremy's father to explain how she feels. After she leaves, Gerard returns to Collinwood and goes into the drawing room. He takes out his devil's sigil, and says it's a shame they must sacrifice Grimes so that Quentin will be beheaded. Gerard calls for the shadow of death to visit Grimes.

Grimes sees the shadow approaching him, and collapses.

Gerard smiles and declares that Quentin will be found guilty.

Carrie arrives at Grimes's house and finds him on the floor. He tells her that Quentin Collins did this. 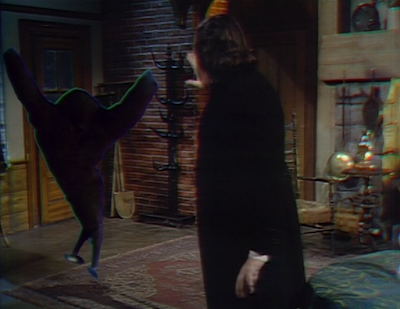 John: We've got the trial of the century underway, and all of the folks that should be keeping a watchful eye on Gerard are off. I sure hope that before the show is over, Quentin will get a chance to duke it out with his 'old buddy,' possessed or not!
Christine: Hopefully Quentin's lawyer will show up tomorrow to give us a break from some of the traditional soap opera love triangles and teen smooching that's been going on heavily this week.
John: It's the return of the killer shadow! Who would have expected that the least-convincing effect in the history of the show (a title not so easily awarded) would return to haunt someone else. 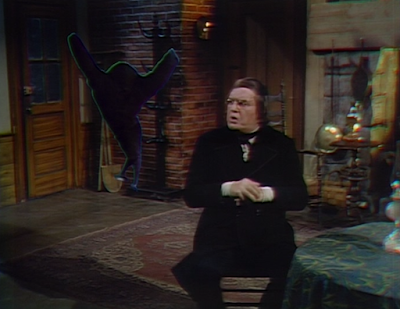 Christine: What's up with those spindly legs on the shadow monster? Even though this shadow didn't have the same undulating motion that Angelique's conjured shadow had, I still couldn't help hearing Herb Alpert and the Tijuana brass when it advanced on Mordecai. Now we know where Angelique learned how to conjure this cutout figure.
John: For a moment I thought that we'd find out that Jeremy refused to deliver his father's note to Dawson, and Carrie's unannounced arrival would thwart Gerard's plan, but it looks as if it will serve him well, giving Grimes a chance to level an accusation at Quentin directly. Unless I'm right about the first part, and Jeremy returns and he and Carrie decide to hide his father's body. Of course, that seems somewhat far-fetched, even for our writers...
Christine: Nothing is too farfetched for this gang of writers.
Episode 972
Posted by John Scoleri at 6:00 AM