Carrie arrives at Grimes's house and finds him on the floor. Jeremy returns and when he sees Carrie, tells her she can't stay. She tells him that his father is dead on the floor just a few feet away. Jeremy is upset, realizing that his father is really dead. He asks her how it happened. Carrie says he was moaning when she arrived. Jeremy asks if he said anything before he died. She says that he did. 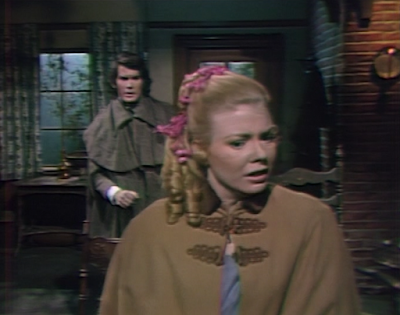 Gerard tells Dawson that he should be getting the coroner's report on Grimes soon. Dawson asks who found the body, and Gerard says it was Carrie. Dawson says that Grimes testimony would have been useless, but with his death, it would appear that he will win the case for them. 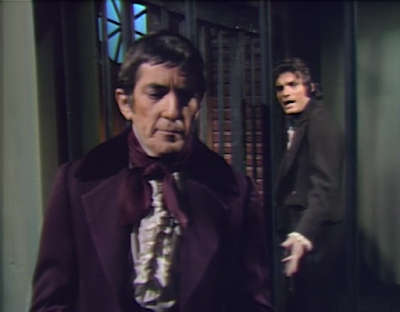 The court comes to order, and Dawson solemnly notes that his next witness turned up dead last night. He says he can prove without a shadow of a doubt that the death is the result of witchcraft at the hands of Quentin. He calls Carrie Stokes to the stand. She is sworn in. Dawson asks her when she last saw Mordecai Grimes. She says she saw him at his house last night. She found him on the floor in his house. She thought he had fallen, and when she saw the look in his eyes, she knew he was dying. Dawson asks if he said anything to her. She says he did, and when he asks what he said before dying, she refuses. Dawson compels her to tell them. She says that his last words were, "Quentin Collins." She adds that Quentin didn't kill him, and when Dawson objects, it is sustained. Barnabas has no questions for her. Dawson provides the coroner's report saying the cause of death is unknown, and clearly an act of sorcery. 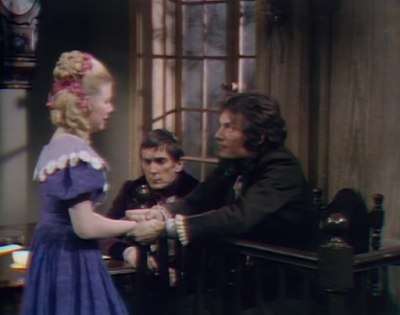 He then calls Jeremy Grimes to the stand. Dawson asks him about the letter he's holding. Jeremy explains that it was a letter his father wrote and asked him to deliver to Dawson right before he died. Dawson reads the letter explaining how he had evidence proving Quentin's guilt. Barnabas asks Jeremy if the letter was sealed when it was given to him. He says that it was. He asks if his father told him of the contents of the letter. Jeremy says he did not. Barnabas points out that only Jeremy's father and Dawson were the only two men to know the contents of the letter were his father and Dawson, and now one of those men is dead. He points out how conveniently the course of the trial has been altered in the last 24 hours. The last remark is stricken from the record, and Jeremy is dismissed. Dawson rests his case, and Barnabas is asked to present the case. Barnabas calls Quentin to the stand. 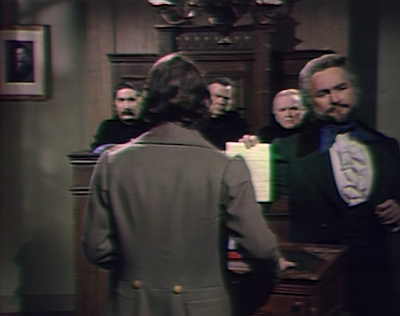 Quentin discusses his arguments with Grimes. Barnabas asks if he had anything to do with his death, and Quentin has denied it. Barnabas asks if Quentin has ever practiced the Black Arts, and he says he wouldn't even know how. Dawson cross-examines him. He asks if Desmond sought out the head of Judah Zachery on his request. He admits that he did. Dawson asks why, and Quentin says it was merely curiosity. Dawson asks if he longed for the powers of Judah Zachery. Quentin says he did not, and Dawson accuses him of using those powers to kill off the list of victims. Quentin says he's sick of Dawson's lies and insinuations, and when he gets through with the trial, he'll deal with him. 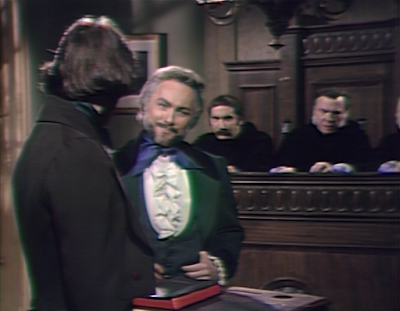 The judge threatens Quentin with contempt. Dawson says the defendant has given an adequate demonstration of what he was trying to prove. Quentin steps down, and the defense rests. Dawson gives his closing remarks. He says facts support that he is guilty as charged, listing off the victims he was found with. He mentions Quentin's staircase through time, and his admission of owning the head of Judah Zachery. Barnabas points out that what Dawson claims as fact is hearsay. No one alive can say that he killed any of the victims. He points out that given that fact, the tribunal cannot come back with any verdict but not guilty. 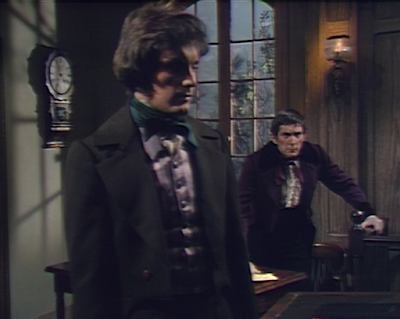 Carries comes to see Jeremy. He tells her that Quentin is guilty. He says he's a warlock, She tells Jeremy that he sounds like his father. He says he hopes they execute Quentin. Carrie runs out on him.

The court comes to order, and the judges announce that they have arrived at a verdict. 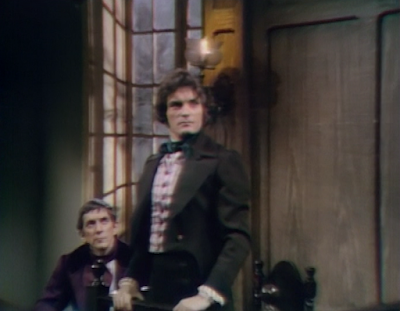 John: Grimes' pupils were like half moons? What the hell does that even mean? And how exactly did Dawson know what Grimes told Carrie? Because a good lawyer would never ask a question to which he didn't know the answer. I'd almost be willing to buy it if Gerard had planned for Carrie to be there, and used his powers to make Grimes tell her Quentin was responsible.
Christine: It means his pupils looked like this, I guess. 🌗 Eww, that must have been pretty creepy to see. I'm guessing that Jeremy told Dawson about Carrie hearing his dying dad utter Quentin's name.
John: Again, Dawson is in fine form in the courtroom today. I think his best move was getting Quentin to fly off the handle, and go so far as to threaten him in front of the tribunal. While I'd like to see Quentin get back at Dawson, it probably wasn't the smartest thing to say from the witness stand. 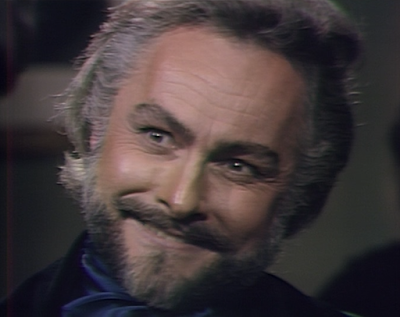 Christine: You can't blame Quentin. It's up to the lawyer to see that he keeps his yap shut and doesn't walk into traps like that.
John: I sure hope this is the end of the road for Carrie and Jeremy's relationship. The two young lovers were really beginning to get on my nerves.
Christine: That's because you're not a teenager with raging hormones. The conflict between them will only fuel their intense feelings for one another, so I recommend that you take up meditation or have a cocktail before episodes from now on. What's your guess on the verdict? I'm expecting a date will be set with the executioner on Monday.
Posted by John Scoleri at 6:00 AM