Dawson moves that the court make an immediate decision. The tribunal says they are ready to render a decision. They are interrupted by a woman dressed in black. She claims to be Joanna Mills. Dawson says it's a hoax, and Barnabas asks Quentin if she's Joanna. He says that she is. Dawson says the woman cannot be Joanna Mills, because he entered her death certificate into the record. The court asks Dawson if he thinks the woman is dead. Dawson admits she's alive, and Barnabas urges the court to allow her to testify. Dawson loses his composure, accusing the defense of trying to trick the court. Barnabas says that Dawson gave the best reason why she should testify. He says Dawson entered a sketch into the record, and that can be used to determine her identity. The course says they will also check a handwriting sample before deciding. 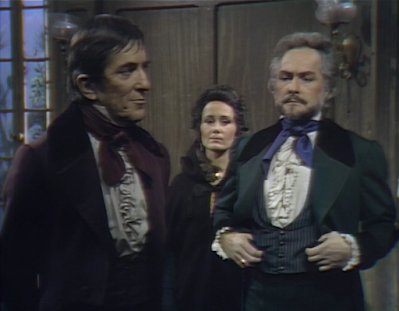 Gerard drinks, and tells Samantha he wishes they could see the end of Quentin's trial in person. She says she can't get over what happened last night, sure that the ghost of Joanna has returned to haunt them. He holds her and tells her that everything will be alright. He says Trask will put the nail in Quentin's coffin, introducing the letter into the record. Samantha says he wasn't supposed to do that. She says it might already be all over for Quentin.

Barnabas says that they will let Joanna take the stand, and it will ruin Dawson's case. Joanna comes into the jail to speak to Quentin. Barnabas leaves them. She asks if he's glad to see her. He says he's in shock, since he thought she was dead. He asks her to explain how she wrote and sent the notes. She says she wrote notes in the sanitarium, but never sent them so she doesn't know how he could have received them. She says she'll do whatever she can to help clear him. He tells her that Daphne is at Collinwood. She thought Quentin had killed her, and she came to avenge her death. She says she wants to see her, and he tells her that he and she should have a long talk first. Barnabas returns and says the judges are ready. 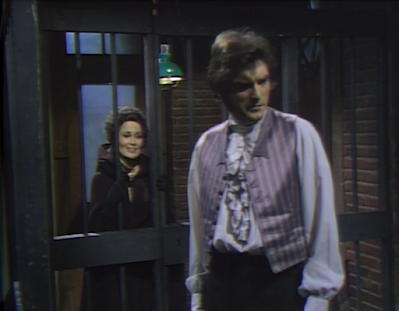 The judge says they will hear Joanna Mills testimony. She's sworn in, and Dawson objects. He points out that if it is Joanna Mills, she escaped from a mental institution. The judge asks if it's true she escaped from an asylum. She says she didn't escape, she just left. She explains that she was there because she loved a man who could never be hers. They asked about her body washing ashore, and she says she knows nothing of it. Dawson says he has no questions for Joanna. Barnabas asks her about her emotional disturbance, asking her to identify the man responsible. She says she was and is in love with Quentin Collins. He mentions the letter found in the tree, and she says that she wrote it. She says that on her way to Collinwood, she found Quentin's note in the tree, and decided to respond to it. Barnabas thanks her for her testimony, and dismisses her. He tells the court that there's nothing supernatural about the letter, and no spirit left it at the oak tree. He asks that Trask's testimony be stricken from the record. The tribunal agrees that Joanna's testimony invalidates Trask's own, which will be stricken from the record. The judge also mentions her testimony raises serious questions regarding events and evidence in the trial. Barnabas tells Dawson that someone is trying to incriminate Quentin. Dawson requests a recess, and one is granted. 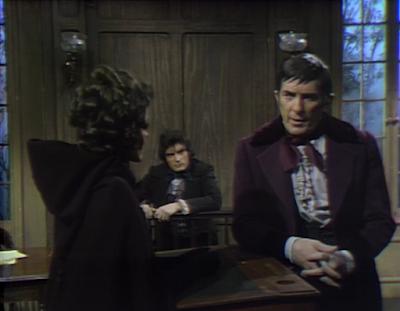 Gerard can't believe what Dawson told him. Dawson says they need a stronger weapon, and says they must use the head of Judah Zachery. Gerard says he'll have an answer that night.

Joanna arrives at Collinwood, frightening Samantha. She asks to see her sister Daphne. Joanna says that Samantha and she know of one another, even though they've never met, Samantha sends her upstairs to see Daphne. Gerard comes in to see Joanna ascending the stairs. Samantha tells him that Joanna is dead, and when he tells her they can see that she's alive, she reiterates that she knows she's dead because she killed her. 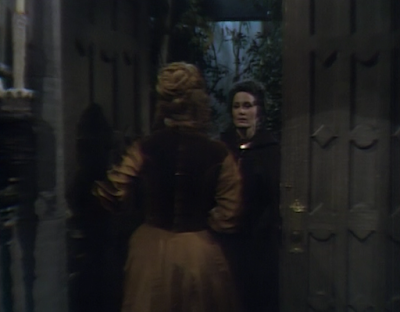 John: I wonder how long before the good news of Joanna's arrival turns into bad news for Quentin. Unless he can figure out a way to marry both Daphne and Joanna, I sense there's a storm coming... Of course, perhaps that will explain Daphne's ghost-connection to Gerard in 1970.
Christine: Too bad there never was a spin-off courtroom drama with Barnabas Collins. Straight out of being chained behind a wall for days and he's right on top of his lawyerly game!
John: Dawson jumps in to comment in the middle of Barnabas' questioning, and for the first time loses all composure in the courtroom. I do hope the head of Judah Zachery will soon take the stand to testify! 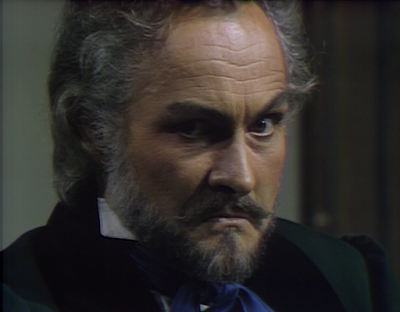 Christine: That would be awesome if the Head in the Box took the stand! Dawson is just as entertaining when he's flustered. He is the Hamilton Burger to Barnabas' Perry Mason.
John: Well, well, well. Samantha is quite the killer, it seems. I wonder who else she's managed to do away with. Have any of the Collinwood help gone missing? Just think — if he plays his cards right, Gabriel might even be able to convince folks that Samantha was responsible for Daniel's death!
Christine: It's a wonder she didn't kill Gerard after he kicked her to the curb. So, is Joanna a ghost, did Samantha kill someone else by mistake, or did she just botch Joanna's murder?
Posted by John Scoleri at 6:00 AM