While Gabriel watches parallel time, Stella goes to shut the door, and asks a person Gabriel can't see if they've been hiding behind the door all this time. She then asks why they have a knife in their hand. The door shuts and she screams. Gabriel pounds on the door and tries to get in. The door suddenly opens, and he goes into an empty room.

At the docks, Quentin and Joanna return, telling Daphne that the boat left without them. Leticia says that Julia is with Desmond. Quentin says that he has to go to Collinwood. Joanna says he understand that he's in love with Daphne as much as she's in love with him. He tells her that he has an idea how she can help him. He asks her to go to Gabriel, who might not want Gerard to end up with Daphne. 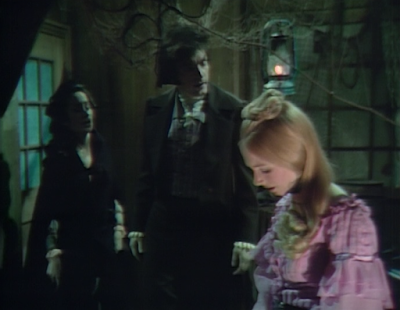 Daphne reiterates that she told him everything she knows about the strange room in the East Wing. He says he thinks it's curious that you can live under the same roof with someone and not notice all of their special qualities. He tells her that he can see why Quentin and Gerard were attracted to her. She says that it's a shame what happened to him. He asks what she means. She says that she always thought he was the most misunderstood person in the house. He adds the most underestimated. She says that out of the wheelchair, it's clear how attractive he is. He asks why she never told him that before. She points out that he was a married man. He says he was married to a pig, but she's not alive any more. She says Edith shouldn't have treated him the way she did. 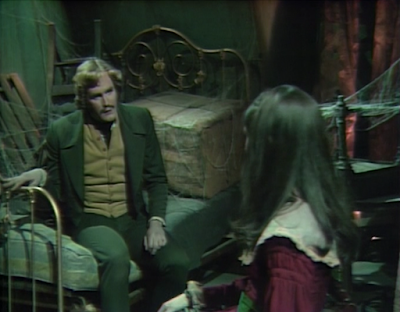 Rubbing her shoulder, he asks her how she would have treated him. He nuzzles up against her and says he may have changed his plans about her. He says after he gets his money from Gerard, he'll keep her with him, and give her anything she wants. As he turns her face to kiss her, she squirms to get away, and squeals. He realizes that she was lying to him. He tells her that he'll give her one chance to prove that she's nice, or she'll be dead. He gags her and tells her that he'll be back. After he leaves, she shuffles her chair towards a burning candle and starts burning the rope on her wrists. 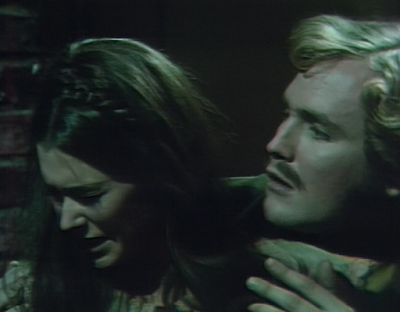 Joanna returns to Collinwood looking for Daphne. He asks if she heard Quentin escaped from jail. She says Quentin says he may be able to tell her where Daphne is. He asks if she knows where Quentin is, and she says she does, but if he tells anyone, she'll deny it. He says that would give Gerard too much satisfaction. He says he looked like a doomed man, and is out looking for Quentin with the police. Joanna asks Gabriel what he thinks Gerard would have done with Daphne. 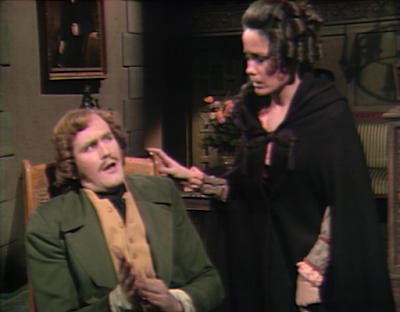 Daphne gets out of her restraints, but the door to the room she's in is locked. searches for a way out, and finds a level that opens a secret panel. She grabs a candle and steps inside. 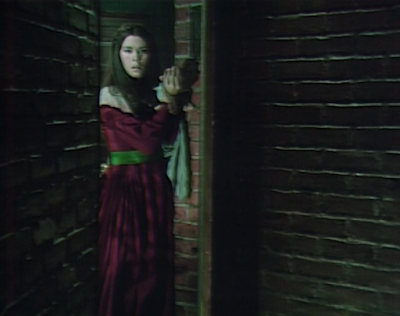 Joanna asks if Gabriel thinks Gerard would have harmed Daphne. He says he thinks he just didn't want her to see Quentin before he was executed.

Daphne makes her way through the secret passage. 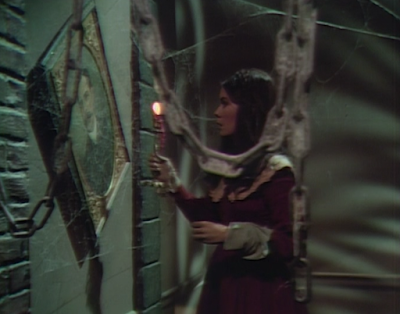 Joanna asks about the East Wing, reminding him of the sounds she heard. He tells her to check Daphne's bedroom first. She goes upstairs to look for any clues.

Daphne wanders the seemingly endless secret passage, realizing that she's gone in a circle and ended up back where she started. 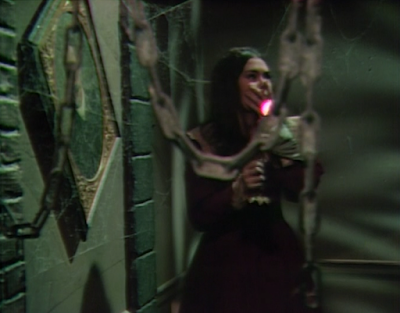 Gabriel returns to the East Wing and finds Daphne gone. He looks around the room, and notices the lever that opens the secret panel. He steps inside and shuts the door just before Joanna enters the room. She sees the restraints and remnants of food, and realizes that Daphne was being kept in that room. She heads back downstairs.

Gabriel heads into the secret passage.

Daphne hears footsteps and hides in the shadows.

Leticia tells Quentin that Desmond is sleeping. She asks if Joanna has come back. He says she's been gone for three hours, and he's concerned that something happened to her. He says he has to go to Collinwood, and Leticia stops him. She says there are police everywhere looking for him. Leticia tells him that she thinks fate meant for he and Daphne to be together like it meant for she and Desmond to be together. 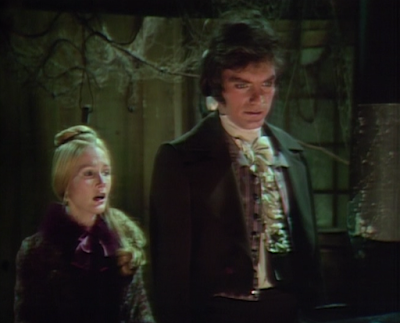 Joanna searches the East Wing, calling for Daphne. She hears voices, and opens a door. Inside, she sees who she thinks is Gabriel and Leticia. She tries talking to them, and to enter the room, but she can't, and they don't hear her. He calls her Melanie, and she calls him Gabriel. He pours himself a drink. He tells her not to tell his mother. She asks why he doesn't trust her. He says he thinks she'd just as soon slit his throat as look at him. 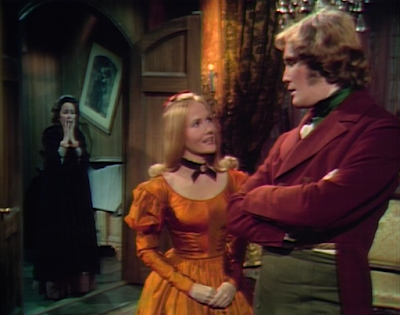 She says she's tried so hard to be friends with him. He says friends, but not brother and sister. He points out that he is a Collins, and she was adopted, so she's not. He tells her that maybe someday she'll learn that it's not good to be a Collins. She asks him what happened to Stella, their mother's secretary. He says she left. She asks if she gave any notice, and he tells her it's not healthy to ask questions. He closes the door, and Joanna wonders why he called Leticia Melanie. She realizes that she has to find Daphne. 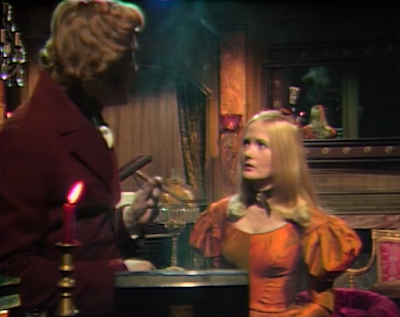 Daphne finds a door that leads outside. She steps out and is grabbed by Gabriel. 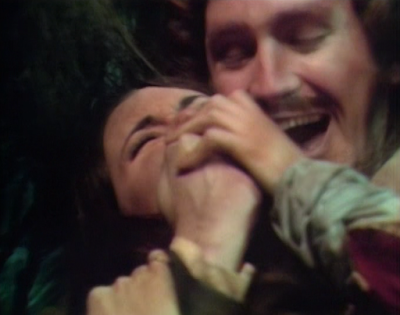 John: Ewww! I couldn't believe Gabriel was falling for Daphne's obvious ploy! Of course, since he was, you'd think that with her life on the line she could have feigned interest when he leaned in to kiss her... 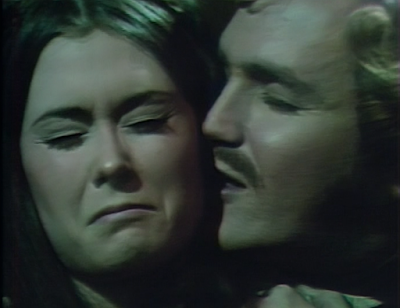 Christine: I think it just goes to show that Gabriel is too detestable for her to pretend to enjoy his lips on her, even to save her own life.
John: An all-time classic Dark Shadows blooper when Gabriel is unable to tie the gag around Daphne's head, and she literally has to bite down on it to keep it in her mouth! 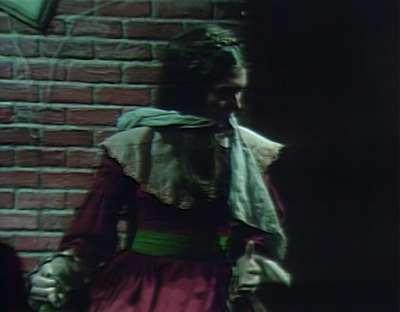 Christine: It is always fun to see those scenes from the bloopers reel come up!
John: I know we've discussed this before, but honestly, how extensive do secret passages have to be for people to get lost in them? I'm not quite sure why the secret passages would have a door leading outside... and of course that's exactly where Gabriel would be waiting for her!
Christine: The secret passages have a door leading outside to give the inhabitants a way to leave the house without attracting notice, enabling them to have secret trysts or dispose of dead bodies. I love that the Mustache Man made a cobwebby appearance and was the marker for Daphne to realize she was going in circles. 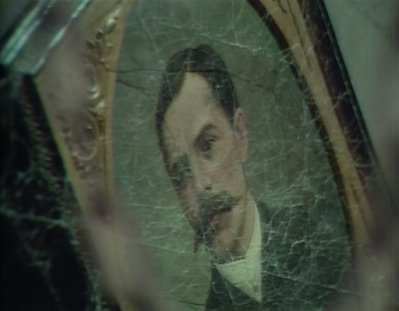