Barnabas tells Magda that now that Dirk is destroyed, there's no reason for anyone to suspect a vampire in Collinwood. He tells her that he'll sleep in the mausoleum tonight, and return to sleeping in the old house tomorrow. 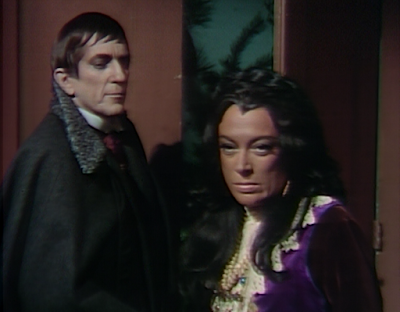 Carl enters the Collins family mausoleum, searching for the vampire. 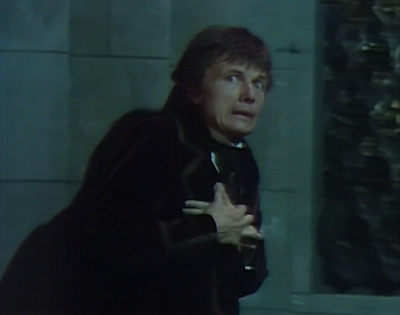 Barnabas approaches the mausoleum, stopping at Rachel's grave to pay his respects. Angelique appears and says it's very touching. She says she is watching over him. Barnabas says it's almost dawn, and he must go. She tells him he has very little time left in the past. She asks him to come back with him to his own time. He explains that he can't leave until he does what he came to do—save David and Chris Jennings. She begs him to trust her. She realizes that he would rather face anything alone than commit himself to her. 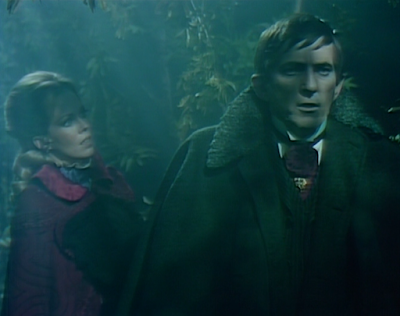 He leaves her to enter the mausoleum. After he does, Carl comes from behind it, and peers in as Barnabas opens the secret panel. 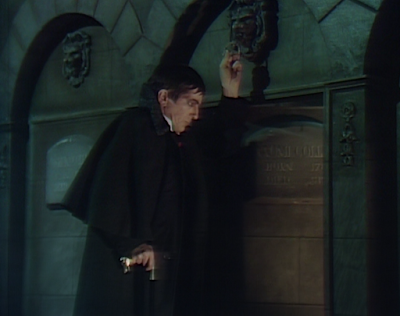 Inside the secret chamber, Barnabas gets into his coffin.

Carl realizes that Barnabas is the vampire. 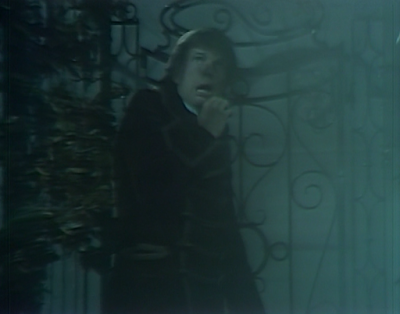 Quentin is drinking, listening to his theme, when Magda arrives at Collinwood. He invites her into the drawing room and closes the door behind her. She realizes he's drunk, and tells him he'll come back when he's sober. He asks if there's good news, and she nods. He asks her for the cure. She tells him he has to wait until the next full moon to perform the ceremony. She tells him that she has a hand that will remove the curse from him. He asks why she's suddenly on his side, and she tells him because of how much Jenny loved him. 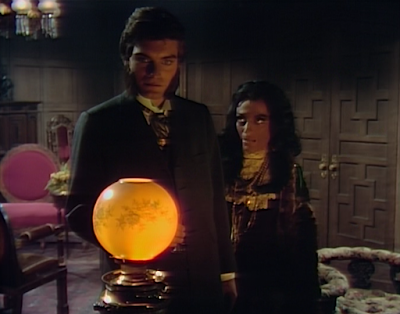 Carl rushes in screaming, and tells Quentin they need to talk, and Magda must leave. Before leaving, she tells Quentin that Barnabas wants to see him after dusk, Carl says they must get Edward and Judith. He says that someone else made Dirk a vampire, and he saw him. Quentin asks who he saw. Carl says there's a coffin the mausoleum, and he knows the vampire is Barnabas. Quentin laughs, and then realizes that he never sees Barnabas during the day. 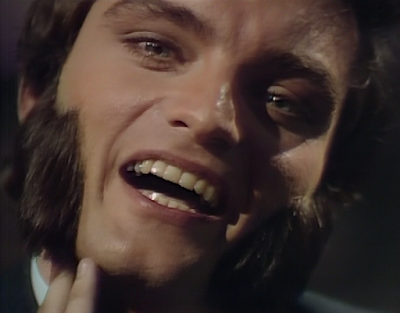 Carl describes what he saw in the mausoleum. Quentin says they're going to the mausoleum together. Carl says they have to kill him, and goes to get a gun. Quentin realizes that Barnabas is his only hope. 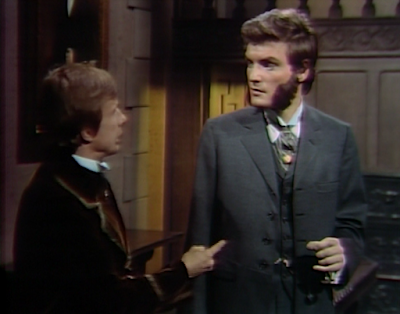 Carl and Quentin arrive at the mausoleum, and go inside. Quentin tells Carl to open the secret door. He does, and they enter the secret chamber with the coffin. Quentin asks Carl for the gun. He willingly hands it over. Quentin opens the coffin, and they see Barnabas inside. 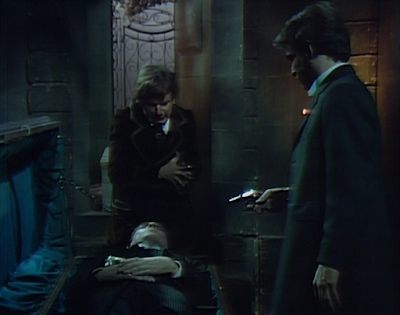 He closes the coffin. Carl tells him to kill him, and Quentin points the gun at him. He asks Carl if he knows how to open the door. Carl says he does not. Quentin leaves and closes the door, leaving Carl trapped in the secret room. 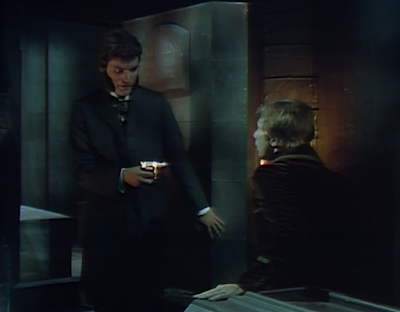 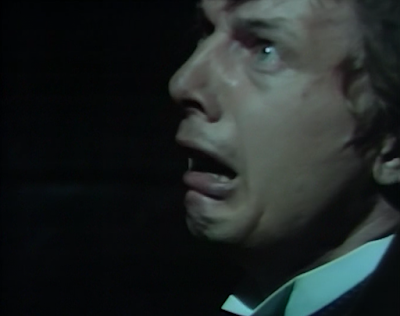 At the old house, Quentin demands that Magda tell him why she's helping him. He wonders how she managed to live in the house with a vampire. He says he's seen Barnabas in his coffin. He explains that he left Carl with Barnabas. She's convinced Barnabas will kill Carl when he wakes. 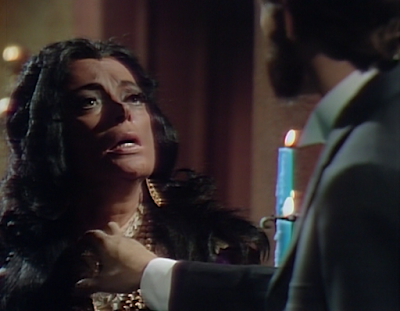 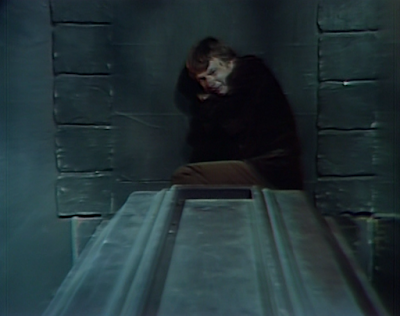 Magda asks Angelique for help. Angelique is surprised. Magda points out that Angelique loves Barnabas, and says that he needs her help. She explains that Carl is with him, and when he wakes, he will kill Carl. She says that Angelique must make Carl forget what he has seen. Angelique refuses to help. She says she doesn't care about Barnabas any more. 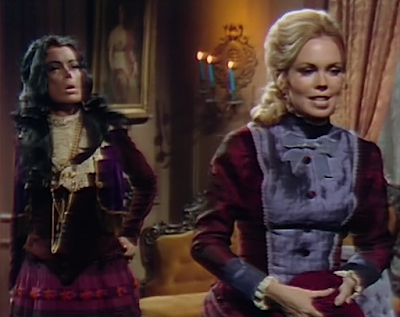 Carl looks at his watch. He says he must get out. He looks around for a way to open the door from the inside. He gets down on his knees and moves the stone which allows him to open the secret door. He rushes out of the mausoleum. Outside, he swears that they'll get cousin Barnabas tonight! 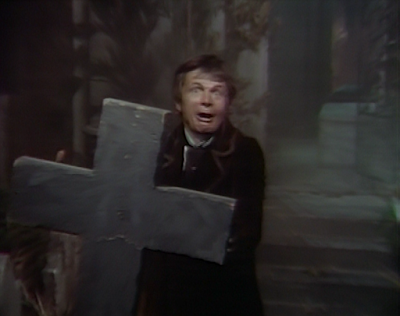 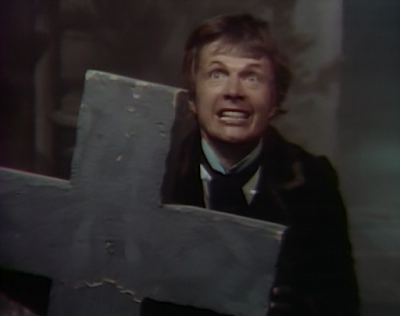 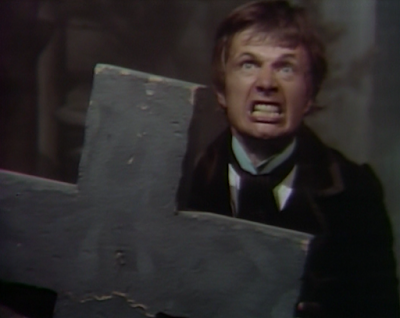 John: Isn't it strange that Barnabas would open his coffin before closing the secret door behind him? The way Carl describes what he saw sure suggests a better vantage point than standing outside the mausoleum...

Christine: I found that odd as well. I guess he was just assuming that was what Barnabas was doing in the coffin room.

John: It was looking like Magda might spill the beans about Quentin Jr., but not today. Now I'm beginning to doubt that we'll ever see those kids.

Christine: It will be interesting to see if Quentin ever finds out about his offspring, and also how Quentin Jr. ends up buried in the woods.

John: Wouldn't Quentin have been smarter to go to the mausoleum alone? He could have helped Barnabas relocate, and then just told Carl that he was imagining things.

Christine: At that point, nobody would have been able to convince Carl that he imagined seeing Barnabas enter the secret room. Carl has to be silenced one way or another to protect Barnabas' secret. Funny how he was intent on getting Barnabas, but had no ire for his brother Quentin for locking him in the mausoleum with a vampire. Incidentally, does anyone believe Angelique truly doesn't care about Barnabas anymore? 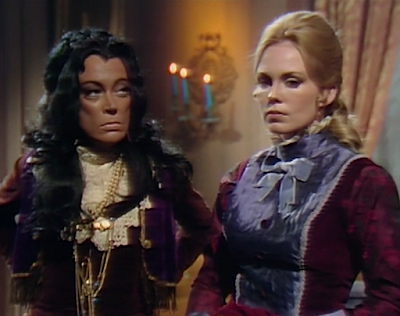