Tim sneaks into the basement of the abandoned house. He lights a candle and looks around. He sees a coffin in he basement. He opens it up and looks inside to find it empty. 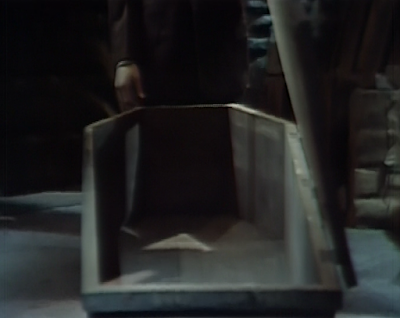 Dirk returns to the abandoned house and enters the basement. Tim is surprised to see Dirk, and Dirk asks Tim what he's doing there. He assumes the Collins' sent Tim to find him. Tim is confused, and asks if Dirk is okay. Dirk says he's alright, but Tim shouldn't have come there. He explains he was hiding there, and Tim says he won't tell anyone. Dirk adds that Tim won't be leaving. He points out that Tim obviously saw the coffin, which isn't empty during the day. Tim asks what's in it during the day, and Dirk says that he is. He tells Tim that he will find out his secret soon enough, and he approaches him with bared fangs. 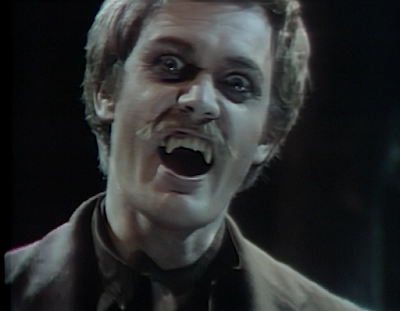 Trask tells Rachel it will be easier if she tells him everything. She says she can't tell him what she doesn't know. He says that his wife is dead, poisoned in a plan by Rachel and Tim. She says that's a lie. Trask demands to know where Tim is. She says she doesn't know, and that she wouldn't tell him if she did. He asks if she'd rather be questioned by the police, and she says that she would. He tells her that she has always occupied a special place in his thoughts, so he's going to allow her to prove her innocence. He says that she cannot leave under any circumstance. If she leaves, he will assume it is to help Tim, in which case he will have her arrested as an accomplice to murder. 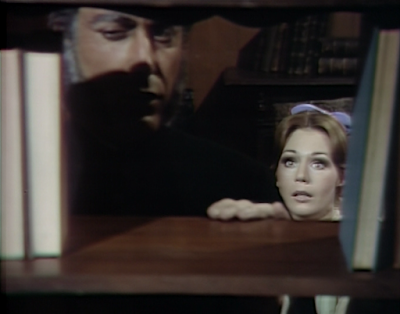 Judith arrives at the school, and asks Trask if there's anything she can do for him. He thanks her for expressing condolences. Trask tells her that his wife was his reason for being. Judith puts her hand on his arm and says that she would want him to go on. He describes his wife as the lifeblood of the institution, and Judith reminds him that the school still has him. Judith suggests that he get some rest, and he says he can't until her murderer is brought to justice. Judith asks if he's been caught yet. Trask says that he thinks Rachel knows where Tim is hiding. Judith offers to speak to Rachel. Trask goes to get her. 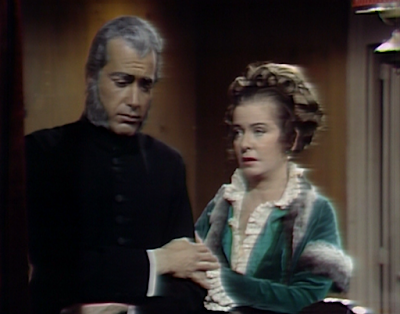 Rachel makes her way through the woods.

Trask returns and says Rachel is gone, surely off to find Tim. He says that they must be planning to leave Collinsport, but they'll need the help of someone in Collinsport. He asks if anyone in Collinwood might help them, and Judith says Barnabas might. She says she'll go to him and explain what happened, so that he won't help Tim or Rachel. She leaves, and Trask calls Evan. He tells him that everything is going smoothly. Trask thanks Evan for his service, and says that his secret vice will remain a secret. 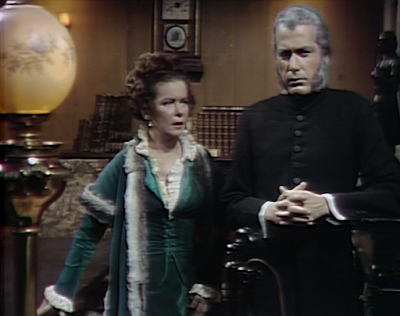 Judith arrives at the old house and lets herself in. She calls for Barnabas. Dirk comes out, and she asks where he's been. Dirk reminds her that she dismissed him. She demands to know what he told Jamison. He says knowing might damage the Collins family name. She gives him 24 hours to leave the estate, or she'll call the police. He says she won't get a chance to do that. He says that a lot has changed in the last few days. He grabs her, and she tells him to get out of her way. She says he doesn't boss him around any more. He tells her that they are about to change roles. He will be the master, and she will be his servant. She tells him to let her leave, and he can have all the time he needs. He leans in to bite her neck. 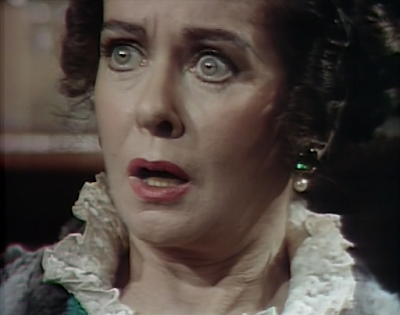 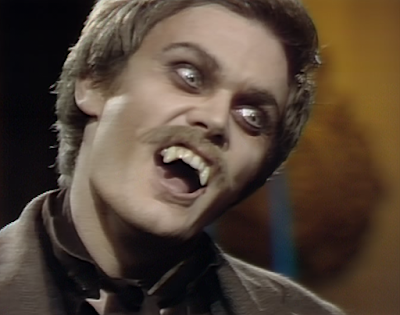 Rachel returns to the old house. She looks in the window, sees Judith, and leaves. 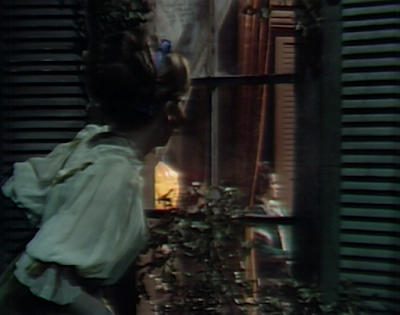 Judith sits in a chair, blood dripping from her neck wound. 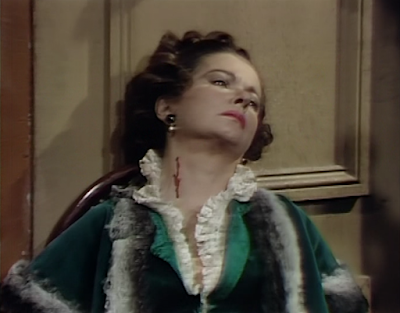 Trask arrives, saying he came to offer his assistance. He asks if she spoke to Barnabas, and notices that there's a change in her behavior. He asks her what happened. He offers to summon a doctor when he sees the marks on her neck. He asks again what happened, noting that he found similar marks on Charity's neck. She says she can't tell because she's afraid. He says he must find who's responsible, as he's already suffered one loss, and doesn't want to lose her, too. 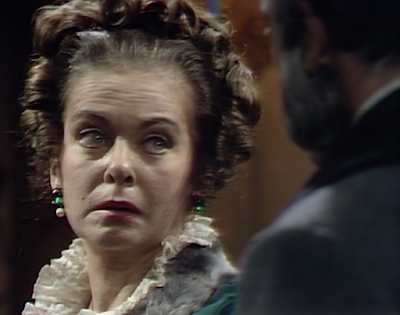 Judith asks him to take her back to Collinwood. He realized that when he came in, she mentioned Dirk's name. He asks what kind of inhuman animal Dirk is. 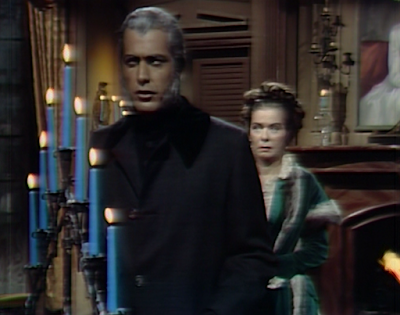 Rachel enters the basement of the abandoned house, and finds a coffin. She wonders why it's there. She sees a lit candle, and is sure Tim had been there. She decides to wait for him. She opens the coffin and finds it empty. As she waits, Dirk enters. 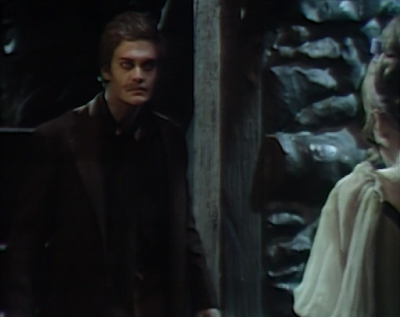 John: Ah, the old empty coffin tease... How many times will we be burned by that cliffhanger?

Christine: Twice in today's episode! I thought Rachel was going to find Tim lounging in there at the end of the episode. I guess we should have started an empty coffin tracker long ago.

John: Dirk was at his creep best today. He actually seemed somewhat restrained in his performance, which made it much more effective. The extra eye make-up didn't hurt.

Christine: I feel somewhat disappointed that he was not his usual over the top self. Like Vampire Tom, he also seems to enjoy the undead lifestyle, biting everyone within fang's reach so far.

John: Ewww! Poor Judith! Do you suppose cozying up to the Collins' matriarch was Trask's plan all along when he coordinated with Evan to have his wife taken out? Of course, being the next Mrs. Trask would still be preferable to being one of Dirk's vampire brides!

Christine: I think both options are equally disagreeable. It is possible Trask got rid of Minerva to set himself up with Judith. If so, it will be interesting to see how long he'll spend in mourning before he puts the moves on her. If that doesn't work out, he may also be setting himself up to blackmail Rachel into a relationship in order to protect Tim. Or maybe he plans to do both.