Dirk comes into the old house. Beth asks what he's doing there, and he says he's there to see Barnabas. Dirk says she's his watchdog, and he knows Barnabas is down in the cellar. She points the gun at him at threatens to shoot him. He grabs the gun from her and turns it on her. She says he'll be killed if he goes downstairs. Dirk says he's been downstairs before, but he doesn't remember what he saw. He heads down into the cellar. 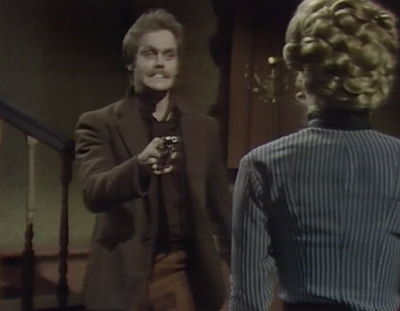 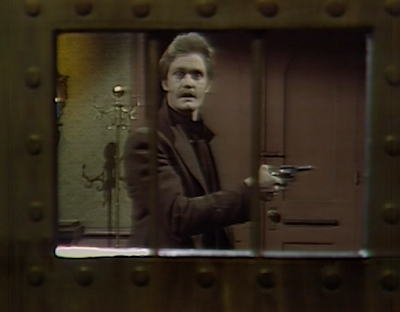 Dirk finds the coffin, and recalls being in the cellar. He remembers the coffin was empty the last time he was there. He says hello to Barnabas in the closed coffin, and tells him he's going to kill Barnabas because he loves Laura. He opens the coffin and Barnabas grabs him. Dirk steps back and unloads the gun into Barnabas, who slumps over in the coffin. Dirk laughs maniacally. 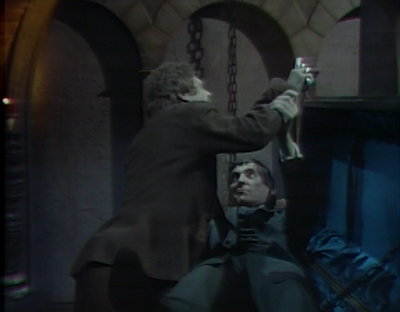 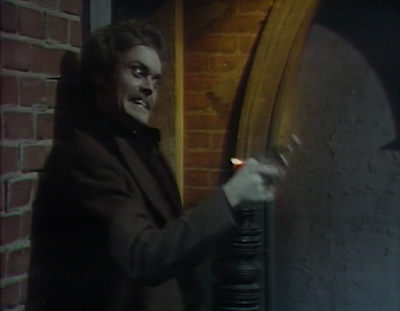 Dirk comes back upstairs and tells Beth that Barnabas is dead. She asks why he did it, and he tells her that Laura wanted revenge. He says he's going to kill them all. Beth says Laura doesn't want him to kill anyone else. He says Beth was happy when he was dismissed. She tries to go upstairs and he threatens to shoot her. He grabs her, and she asks if he'll give her a chance. He gives her the gun, and she points it at him and pulls the trigger. It's empty. He tosses her down into the basement and says that he's going to tell Judith about Barnabas. 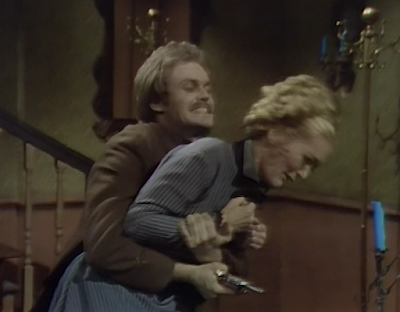 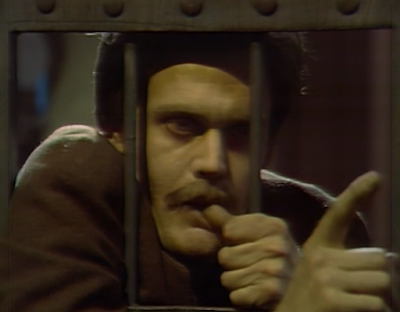 Beth goes downstairs and finds Barnabas laying out of his coffin. She lifts him back in and closes the lid. She drapes herself over it and cries. 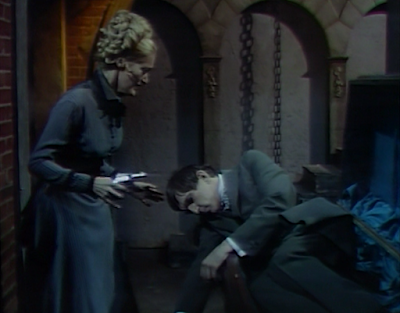 Dirk finds Jamison in the cottage. He tells Jamison he's been looking for him. He explains his mother had to leave due to her enemies, but tonight she will be happy. He asks Jamison if he saw his mother in the fire. He says she should be happy to know that Barnabas is dead. Jamison asks what happened, and Dirk says he can't tell. He says Barnabas is dead and in the coffin in the cellar of the old house. Jamison asks why he has a coffin, and Dirk says it's due to his secret. He makes Jamison promise that he won't tell anyone. Dirk says he killed Jamison's mother because she wanted him to. He says it was due to the secret Barnabas wanted to hurt his mother with. He tells Jamison to tell the others that the vampire is gone. Jamison says there's no such thing, and Dirk says he can go to the old house to see for himself. 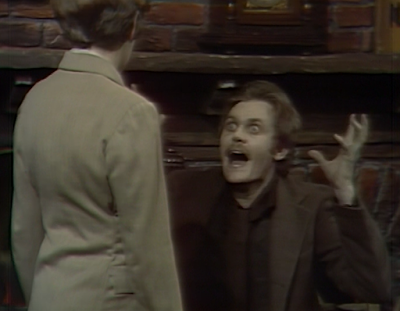 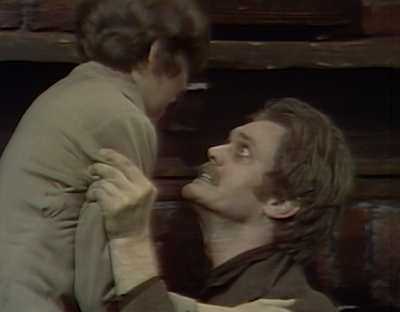 Beth is in the cellar when the coffin lid opens. She is surprised to see Barnabas rise. She says she thought he was dead. Barnabas says that he was unable to deal with Dirk when dawn came. He explains that he cannot die like other men. He tells her there are only two ways he can be killed—a silver bullet or a stake. Barnabas asks if anyone has been by the house, and when Beth says no, he says that means Dirk hasn't had the chance to tell anyone his secret. She reminds him that Dirk thinks he's dead. Barnabas says he will silence Dirk. Beth asks Barnabas to take care of himself, for Quentin's sake. Barnabas assures her that everything with Quentin will work out all right. He does add that the less Quentin knows, the better. 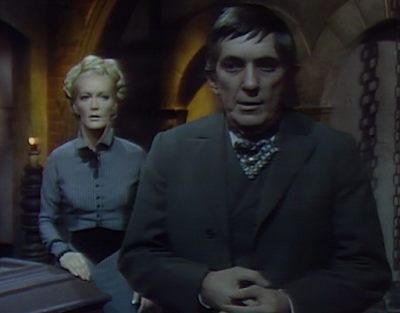 At the cottage, Dirk speaks to Laura. He asks her if she's happy with what he's done. He asks for a sign and the front door swings open. He asks if that's her, or just the wind. The lights go out and he asks if she did that. He returns to the fireplace and looks for Laura. He says he knows she's happy, when he begins to hear Barnabas' laughter. 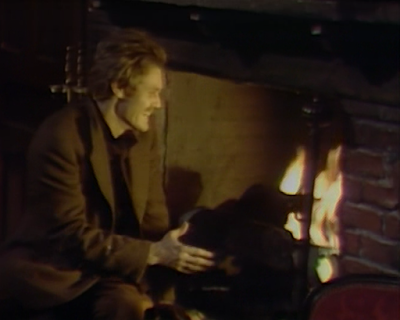 Dirk tells the disembodied voice to stop laughing at him. Barnabas asks him if he's frightened. Dirk says that he killed him, and Barnabas says that he failed. The front door slams shut, and Barnabas says that Dirk will never leave the house. He appears before him, and Dirk says he shot him six times. Barnabas tells him that he must die. Dirk explains that he's already told someone about Barnabas, so even if he kills him, Barnabas will be destroyed. Barnabas bares his fangs and approaches Dirk, who screams. 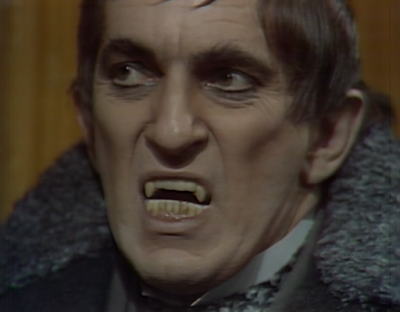 Jamison arrives at the old house. He sneaks into the basement.

Dirk tells Barnabas that he told Jamison, and then he collapses. There's a knock at the door. Barnabas lets Beth in. She asks if Dirk is dead, and Barnabas says he is not. She asks if Dirk told anyone, and Barnabas says he told Jamison. He asks her to go to Collinwood and stay with Jamison. He says that if Jamison repeats what Dirk said, she must make him believe that Dirk was mad. He also adds that she cannot tell Quentin, and reminds her that he is Quentin's only hope. She promises to do everything she can. Barnabas says she must not harm Jamison, and sends her to Collinwood.

Jamison finds the coffin in the cellar of the old house, and says that what Dirk said is true. 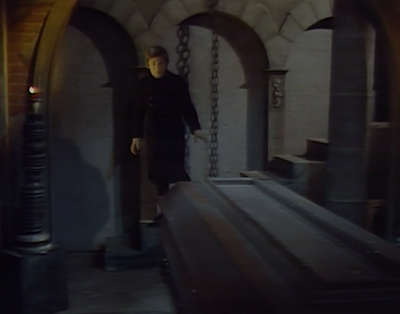 John: Looney-Dirk looks even crazier today than yesterday. I wonder if the make-up will get progressively worse as days go on.

Christine: Not only looks, but is over the top acting crazier. Wowza! The howling at the beginning when he accused Beth of being a hound dog was an interesting addition. So did Dirk let his crazy get away with him when he said he killed Jamison's mother because of Barnabas' secret? I was surprised that Jamison didn't react to him claiming he'd killed his mom, though I suppose both he and David Henesy just wanted to get away from him at that point. I do believe he may be the scariest character on the show right now. 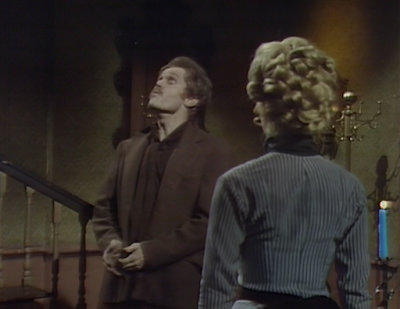 John: Not the wisest move for Barnabas to share with others the effective way of ridding themselves of vampires.

Christine: It seems safe to tell someone under his control who is unlikely to use or share that information.

John: Just finding a coffin in the basement of the old house doesn't really prove everything Dirk said to be true, Jamison.

Christine: He's a kid, and finding a coffin in someone's basement is pretty weird either way, though considering that there's always one on hand to bury the dead at Collinwood, perhaps he shouldn't jump to conclusions. It was only a matter of time until we got the signature head grab from Roger Davis, and he surely did not disappoint. Today was his moment and he seized it to his full advantage. 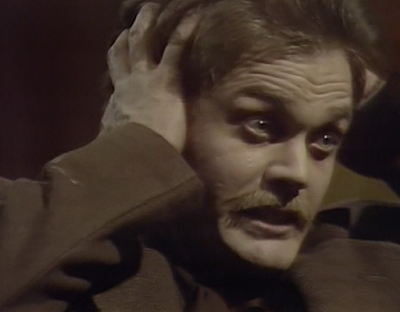 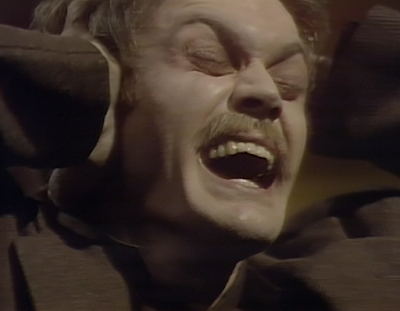 Roger Davis always makes me think of the actor Arch Hall Jr. He was groomed to be a teen idol, and a lot of people, like the writers of Mystery Science Theatre, think he was a ridiculous one. But then he played a maniac in a movie called The Sadist, and people consider him GREAT in it. In the same way, it seems like Dirk is the only Roger Davis character a lot of people can stand, as opposed to his romantic lead type characters.