Judith is frustrated not to remember anything. Trask tells Judith that Dirk is dead, and his hold on her is over. 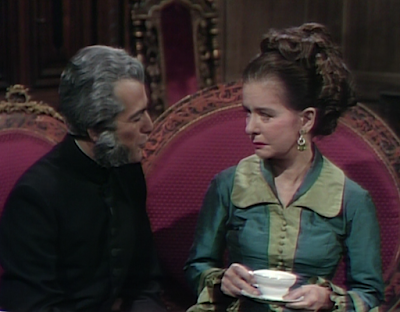 Tim rushes into the drawing room and Trask pulls a gun on him. Trask tells Judith to call the police and tell them his wife's murderer has been captured. 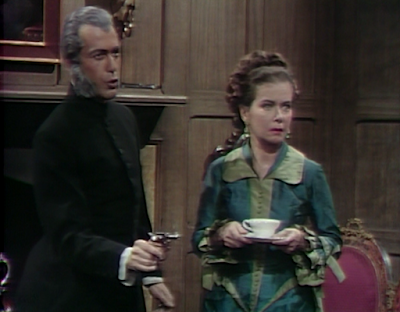 Tim warns Judith not to make the call. He says that if she tells the police about him, he'll have to tell them about her as well. She asks what he means. He tells her that she shot Rachel, and she's dead. Trask calls him crazy. She can't believe it. He reminds her they were in the abandoned house. He heard the shots and then found her standing over Rachel. He tells her that Rachel's body is at the old house. Trask says that Tim is probably the one responsible for Rachel's death. Judith says she remembers coming back to Collinwood, but not from where. She also recalls Trask and Edward examining a gun, and asks whose it was. Trask says it was her gun. She realizes that she did kill Rachel. Trask comforts her. 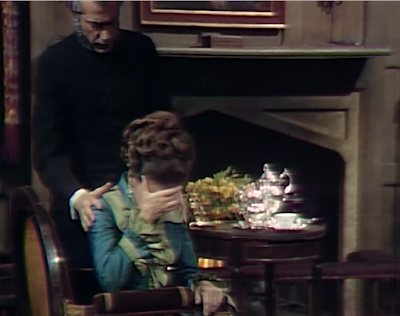 He tells Tim that Judith was under the spell of an unnatural creature. Tim says the same was true of him, but he doesn't know who cast the spell over him. He says he'll find out, and looks at Trask. Judith says that they must call the police. Tim suggests that she not do it. Judith tells Trask to call and tell them there are two murderers in Collinwood. Trask offers to speak to Judith alone. He tells Tim not to try anything he would regret. 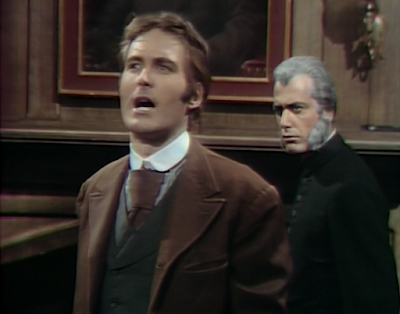 After he's gone, Trask tells Judith that he has fought evil his entire life. He says she will only be evil if she accepts responsibility for the crime. He says that it won't bring Rachel back if Judith goes to the gallows. He adds that his life would be bleak, dark and meaningless if she were to die. She asks him what to do, and he tells her to be silent. Trask calls the sheriff. 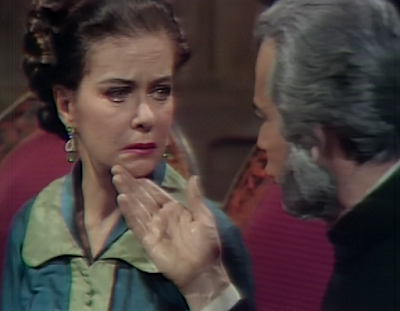 Tim starts to leave, and then goes back to listen at the door of the drawing room.

Trask tells the sheriff that Tim is at Collinwood. 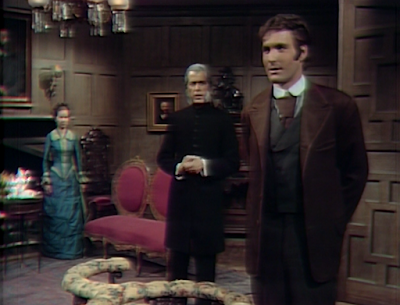 Judith says Edward is responsible for hiring as Carl enters, upset that Dirk is dead. He says that none of them are concerned about his Pansy. Judith says she doesn't want to hear another word about Pansy. Trask says there has been a terrible tragedy, and that Rachel was accidentally shot while the search party was hunting down the vampire. He adds that Judith is upset. He offers to call the police and send them to the old house. Judith says they'll have her buried immediately. Carl asks why, and Trask says there's no need to delay. He tells Carl to go with Tim to the old house to wait for the police. After they leave, Trask tells Judith she must be more cautious. 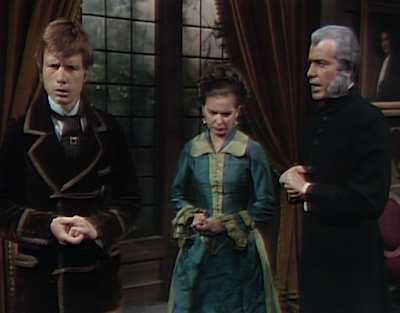 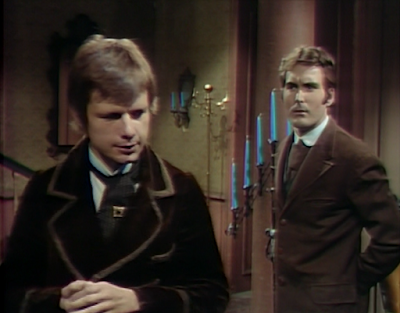 After Carl is gone, Tim hears a woman humming a song. Wind blows through the open window. Tim sees a woman and asks who she is, and where she came from. He doesn't recognize Pansy. She says he's not the one she's looking for. He asks if she's looking for Barnabas. Tim calls for Carl. Carl comes running, and Tim says a strange woman appeared in the house. Carl runs around the house, looking for her, but she's nowhere to be found. 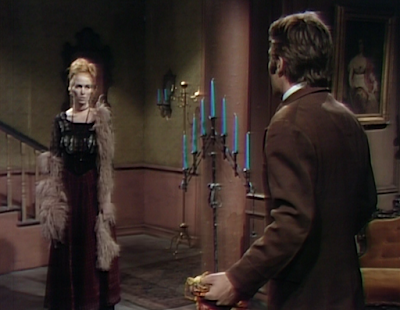 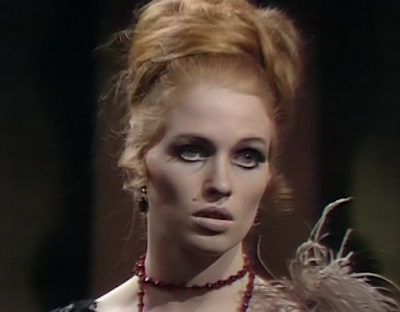 Tim says he saw someone, and Carl's convinced it's Pansy. Tim says they're waiting for them at the funeral service for Rachel. Carl sends Tim away, and pleads for Pansy to return. 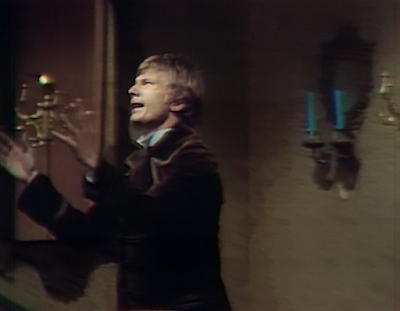 Trask speaks at Rachel's service. As he finishes, he tells Tim to take the body to the graveyard immediately. 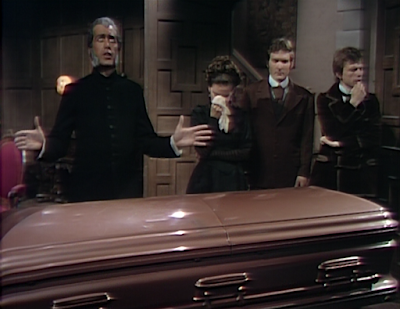 Carl finishes closing up Rachel's grave. Tim says he wants to go into Collinsport to get drunk. Carl says he's going back to the old house. Tim asks him to tell Barnabas what happened if he sees him. After Tim is gone, Carl hears Pansy singing. He tells her to come out. He then comes to the realization that she may be dead, too. 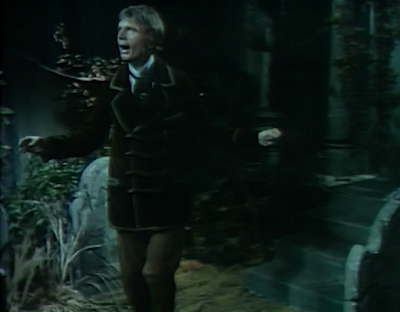 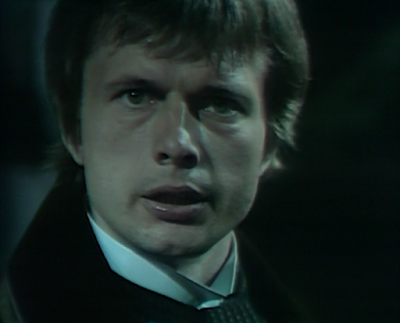 John: Judith has never been so honored as when someone lied about his wife's murder so that she would be free? Um, maybe she is the perfect spouse for Reverend Trask... 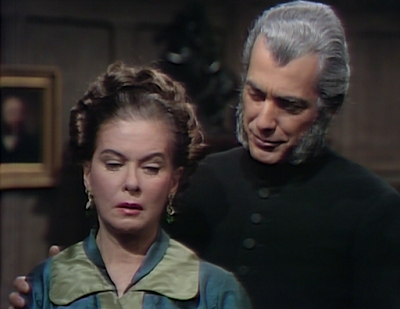 Christine: Minerva's corpse is not yet cold and he's already got his hands all over Judith. No wonder she felt comfortable being on a first name basis with him after all his touchy feely attention. Will there be two funerals and a wedding by Friday? 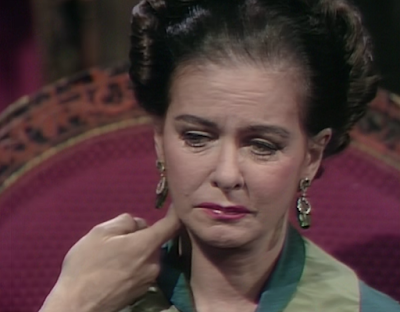 John: Trask casually throws out that the search party was looking for a vampire when Rachel was shot. Must have been nice to live in a time when it was safely assumed that the police wouldn't be interested in witness testimony or physical evidence in a homicide.

Christine: Who would think to doubt the testimony of a pistol packing priest?

John: Where do they keep finding brand new coffins at a moment's notice? Not to mention the all too common Collinsport-special same-day internment! Do you think Barnabas will be angry that they had a service for Rachel and buried her without telling him first?

Christine: It's possible they reused Quentin's coffin since he's not using it now, though I do believe they keep a few around in the basement that they restock as they are used up. I guess you can't blame them for wanting to bury folks right away since so many of the dead tend to rise up and walk in that town. I doubt Barnabas will accept Trask's version of events, so he will probably be very suspicious about the reasons why they buried her so quickly.