Dirk returns to the abandoned basement. He tells Rachel he's waiting for Laura to come back. Rachel points out that she's dead, and Dirk says there are people with powers to restore life. Dirk is upset thinking about Laura. He hears a rooster, and realizes that Barnabas has failed. He says he warned him to have her there by dawn, and he'll be sorry he's failed. Dirk opens his coffin. He gets inside and closes the lid. 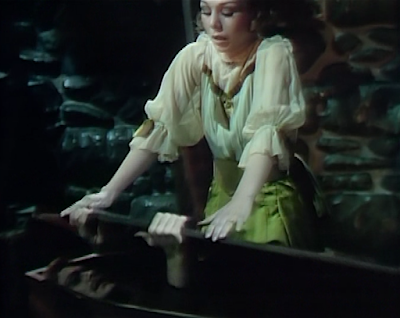 Rachel hears someone enter the basement, and is surprised to see Judith. She apologizes to Rachel, and then points a gun at her. She tells Rachel that it has to be done. Rachel pleads with her to put the gun down. 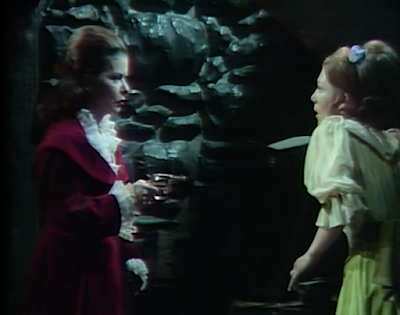 Outside the abandoned house, Tim hears gunfire. He goes into the basement and finds Judith. He asks her what all the shooting was. He sees Rachel on the floor, bleeding. Judith explains that she had no choice. Rachel asks Tim if she's going to be all right, and he says she will. 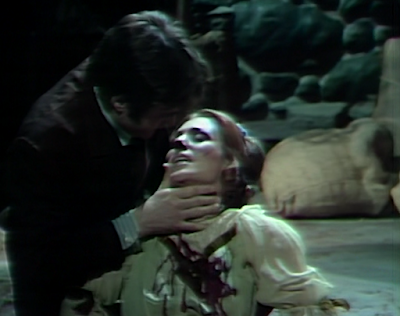 Edward explains that he was all over the house at once. Trask says that he could do nothing against the creature of darkness. Edward wonders who he is and what he wants. Trask offers him a drink to calm him. The phone rings, and Edward answers it. It's the sheriff calling to tell him that the woods have been searched without finding his sister or her abductor. Edward says everyone is confused except Barnabas, who is sure it's Dirk. Trask says he does not trust or like Barnabas, and he doesn't believe that Dirk is responsible. He adds that he is sure Barnabas knows where Tim and Rachel are, and likely is involved in Judith's disappearance. 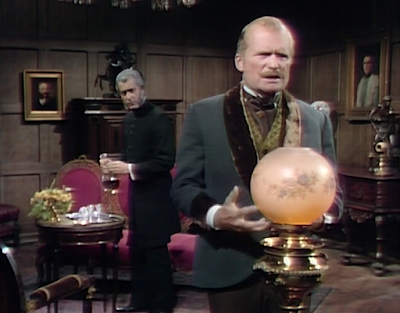 Judith enters, still in a trance, with the gun in her hand. Edward asks what she has done, and takes the gun from her. He sees that three shots have been fired. Judith says that it had to be done. She adds that she did what he told her to do. Trask assumes she's referring to the vampire. She retires to the drawing room to sit. Trask tells Edward that she's possessed by a will stronger than her own. Edward wonders about the three bullets. Trask says he will seek divine guidance against the evil possessing her and the entire house. 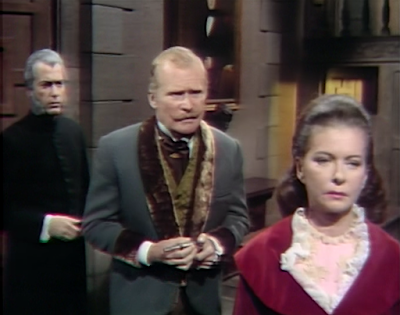 Edward takes Judith upstairs, and leaves Trask alone in the drawing room. He calls for the help of the Lord to drive the demon out of Judith. 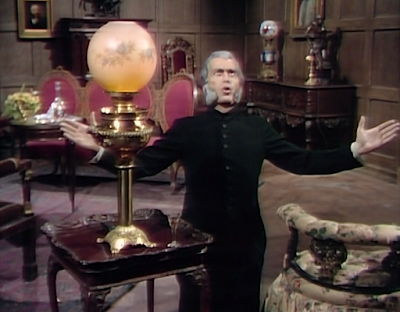 Tim brings Rachel to the old house, calling for Barnabas. Rachel says, "it's gone." Tim says that's good, and Rachel says it's bad. Tim continues to call out to Barnabas. There's no answer, so Tim says he'll go to town to get a doctor. Rachel tells him that if he goes into town they'll catch him. He assures her that he'll be fine. She says that if they catch him, they'll kill him, and begs him to stay with her. She asks if he remembers when they were kids, and the sea shanties they would sing quietly so that Trask couldn't hear them. 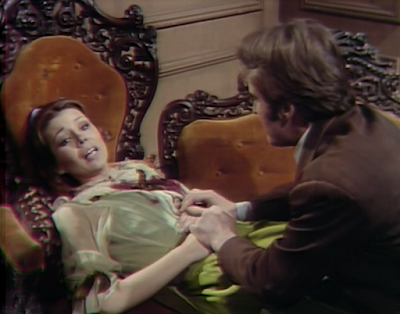 Edward watches over Judith as she sleeps. As she sleeps, she hears Dirk's voice, calling to her, beckoning her to find him where he lies waiting. Judith gets up and Edward asks her where she's going. In a trance, she walks out of the room. Edward realizes that she'll lead him to the vampire, just like Barnabas said. 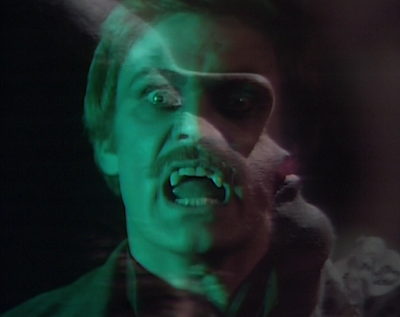 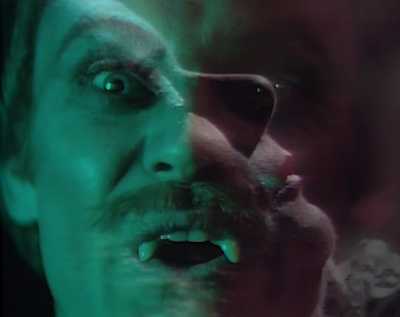 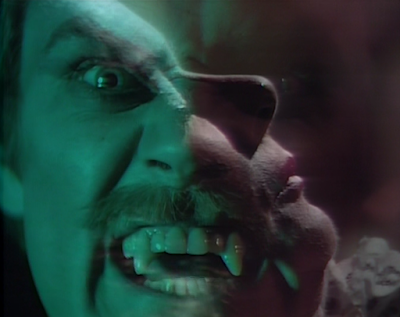 Rachel tells Tim a secret—that her father is coming back to take her home. She says he mustn't tell Trask, and then passes out.

Judith returns to the cellar of the abandoned house. Edward follows her in. She says she has come as she was commanded to. Edward tells her to stand away from the coffin, and asks if it's where he hides during the day. Edward tells her to get out of the way. Judith pounds on the coffin and tells Dirk to wake up before he destroys him. Edward opens the coffin and sees Dirk inside. He closes it again. He realizes that it's almost night, and picks up a rock. He then searches for a stake. He leaves the cellar. 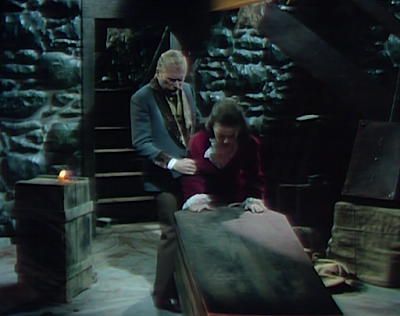 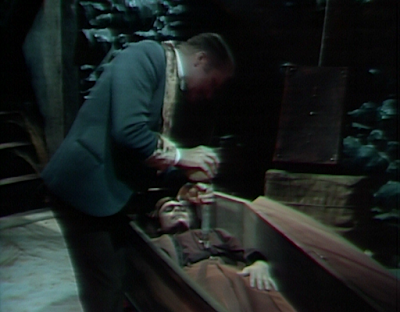 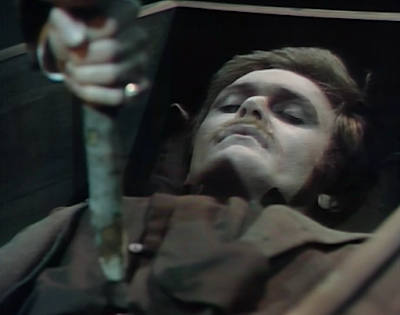 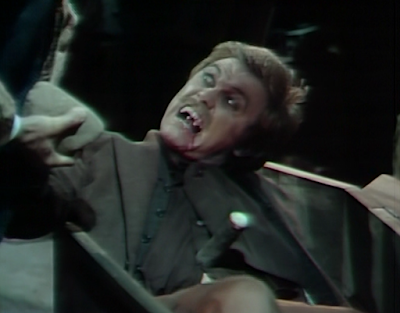 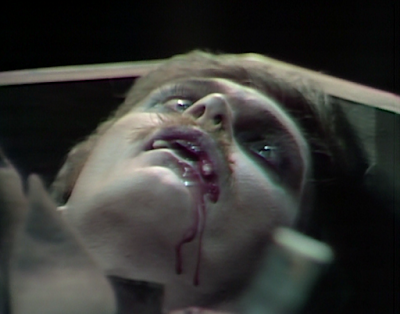 Christine: I certainly was surprised to see her bloody chest, and even more surprised that Tim kept saying she was going to be all right. I would expect that to be a fatal wound.

John: Vampire Dirk continues to get some creepy sequences, giving Vampire Tom a run for his undead money. From the evil dreams to his dramatic death scene, it would appear that Roger Davis found his calling playing a vampire. As it's only Tuesday, I was not surprised when he appeared to stop Edward before he drove in the stake, and as a result, I was shocked when Edward was able to complete his gruesome task!

Christine: Vampire Tom is still my favorite, but Roger Davis played well as a vampire. He was quite menacing when calling for Judith, and had a nice bloody, gurgling death scene.

John: To be fair, Edward should have been prepared to kill the vampire when he followed Judith to Dirk, but he still deserves kudos for delivering the best vampire staking on the show to date.

Christine: I agree with that assessment. His look of horror when he held the rock and stake conveyed that he didn't want to do it, but knew he would have to. Judith turned out to be an ineffectual vampire servant, and it might have been nice if she'd gotten in the way a bit more, but I still enjoyed it the way it played out. 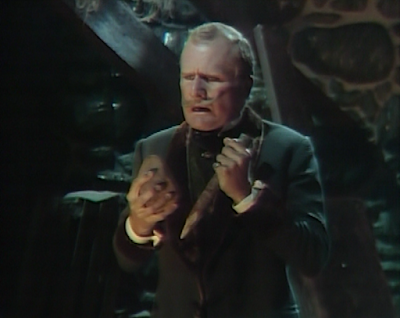