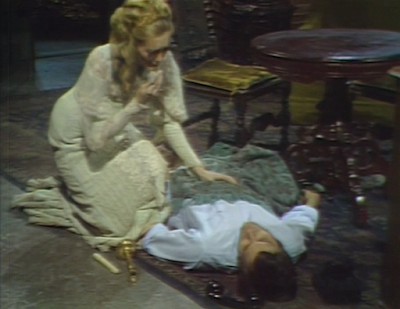 Julia asks Barnabas if he saw the woman she says was in her room. They follow her towards the cottage. Beth enters the cottage and kneels at Chris' body. Barnabas and Julia enter and see Chris on the floor with no one around him. Julia kneels by him to check his vitals, and tells Barnabas that he's dying. Barnabas finds a glass on the floor, and can tell it had whiskey in it. He tell Julia he thinks there's something in it. She smells the whiskey in the bottle and determines it's been poisoned with Strychnine. She calls Windcliff, and Chris starts to stir. 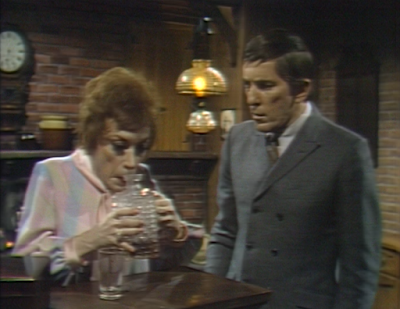 Amy dreams, and hears Beth calling her name. Beth asks Amy what they can do. She pleads for Amy to come to her. Amy is suddenly outside the cottage, where Beth tells her not to look in the window. She asks Beth what's the matter, and she says that this time she saved him. She tells Amy that she must not tell him about her. Amy goes into the cottage and finds Chris slumped over in his chair. Beth comes in and tells her that this time he'll be alright, but tomorrow he will try again. Amy asks who, and Beth says the murderer is coming. The door to the cottage opens, and Beth screams to stop him. Amy sees no one there, but then hears Quentin's music. She tells Beth that it's only Quentin, and that it's alright. She turns to see Chris now has a knife in his belly. David appears and tells Amy that he never wanted Quentin to hurt Chris. Beth tells Amy that David did try, but Quentin made up his mind that Chris must die. Amy wakes up from the dream, screaming. 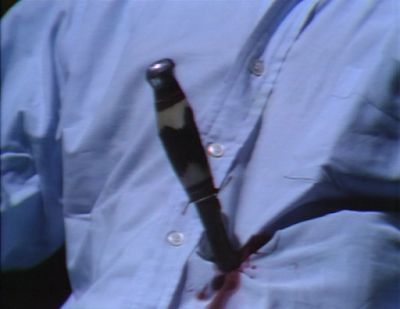 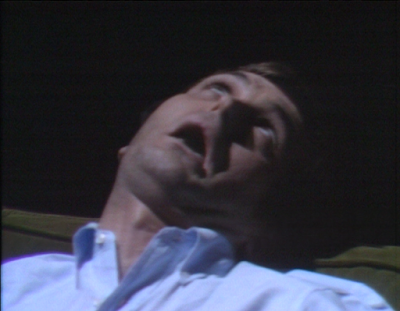 Julia tells Barnabas that Chris will be alright. She then says the figure that they followed to the cottage saved Chris. Barnabas says a dead friend, a guardian spirit, wanted him to live. Julia asks how the woman could have known that she could help. Barnabas says that perhaps she will appear again. He points out that her clothes were from the 1890s. He says that perhaps she has some connection with the curse that made Chris a werewolf. Chris comes out and asks what happened. They sit him in a chair, and Barnabas tells him that he drank whiskey that had been poisoned. Chris asked what it was. Barnabas tells him that he must be honest with them. Chris says that he's considered suicide, but he didn't poison the whiskey. Barnabas asks if anyone else was in the house, and he mentions that David came to visit briefly in the morning. Barnabas tells Julia there's something that he must do, and he leaves. 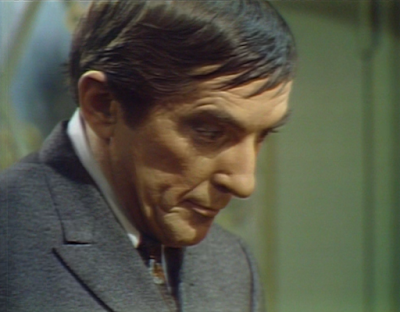 Chris asks Julia how they found him. She says that a ghost led them to him. She says he has a guardian spirit watching over him. She asks if he knows who that might be, and he doubts the existence of such a thing. There's a knock at the door and Amy comes in. She says she had a dream where something terrible happened to him. He tells her that he's alright. Julia asks Amy what she dreamed. She says just that Chris was sick. Julia presses her, and she denies there was anything more to the dream. She tells Chris that nothing else will happen to him, ever. 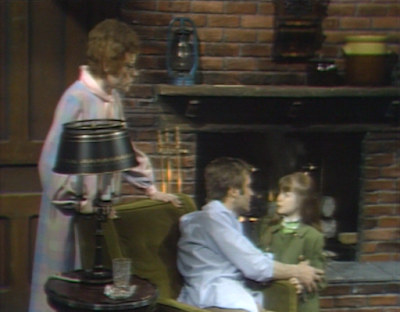 David picks up the phone and asks Quentin if he hurt Chris. He gets no response. Barnabas comes in to his room and offers to have breakfast with him and Amy. He asks David if he enjoys having Amy in the house, and David says they have fun. Barnabas says he saw Chris this morning, and he mentioned how happy he was that Amy and David were friends. David seems surprised. Barnabas asks David about their meeting yesterday, and points out that Chris was very sick last night. David says he's glad Chris is feeling better. 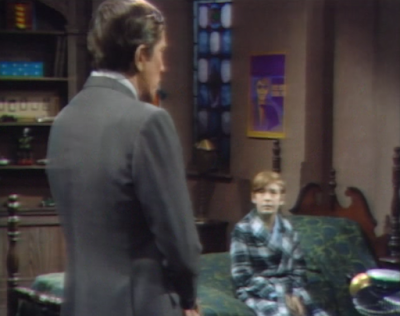 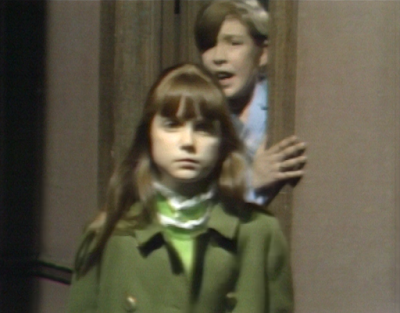 John: I didn't know that Barnabas was so well-schooled on alcohol that he could detect when whiskey has been poisoned. Particularly when you consider that Chris wasn't able to smell it when he drank it. Although the real credit goes to Julia, who was not only able to tell that it was off, but to determine what specific poison was used. Talk about a handy skill to have! 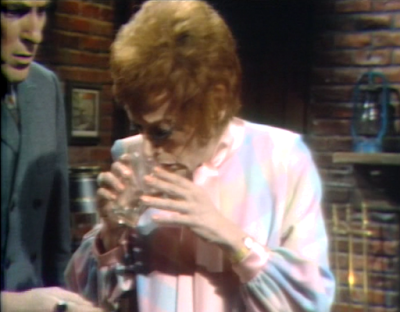 Christine: Considering that he's married to a witch who has a penchant for poisoning others, it seems a necessary skill for him to acquire. Is there nothing these two can't do? 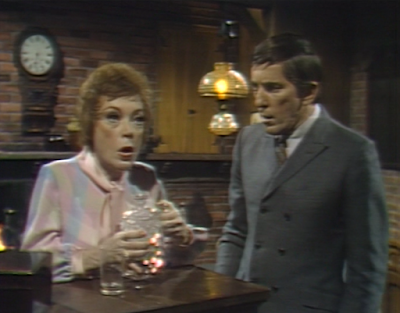 John: I enjoyed Amy's dream, although after the build-up, I was really expecting to see the return of our skeleton friend as it replaced Chris, instead of the anti-climactic knife in the belly that we got. 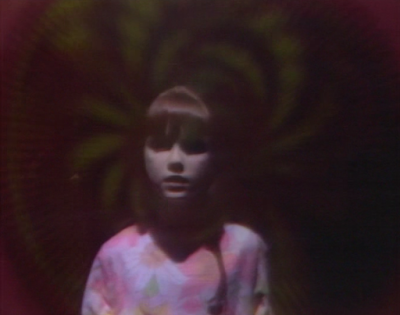 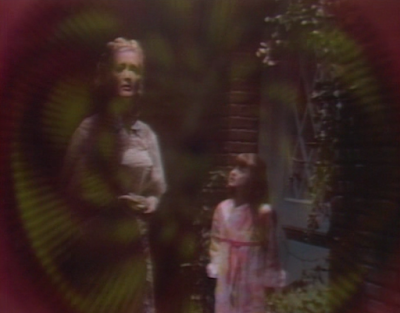 Christine: Perhaps the knife in the belly was not what you were hoping for, but what about the death stare on Chris Jennings' face? Worth the price of admission! That and the undulating heads. 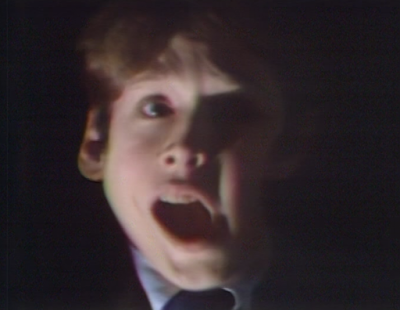 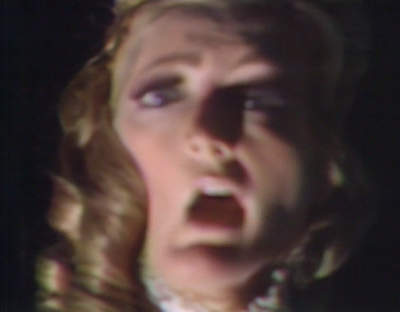 John: Barnabas seems to be zeroing in on David and Amy's involvement in the strange goings-on. I hope we'll find that he was eavesdropping right outside the door as they had their little discussion about Quentin. 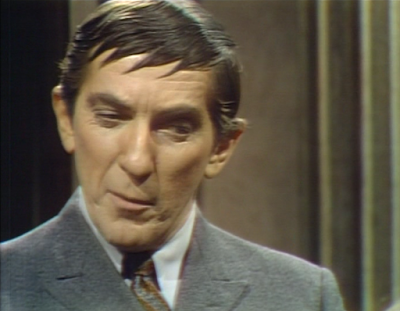 Christine: It's just a matter of time before he finds out about their ghostly collusion. Will Amy get an unseen push down the stairs before she can tell Liz about Quentin?