Angelique tells Vicki's corpse that she will release her from her spell once she's been buried, so she can awaken in a coffin only to die again. 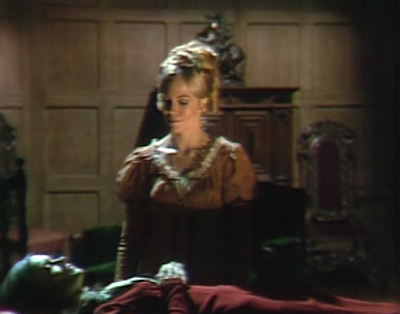 Barnabas rises from his coffin and is met by Ben. Ben confirms that he is ready to help him.

Peter looks over Vicki's body as the Countess and Millicent look on. Peter tells them that Vicki is not going to be buried. He says he can't let got of her, and does the patented Bradford/Clark head-grab. 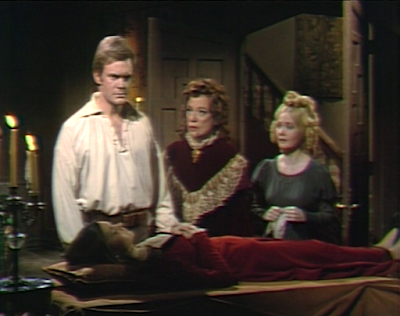 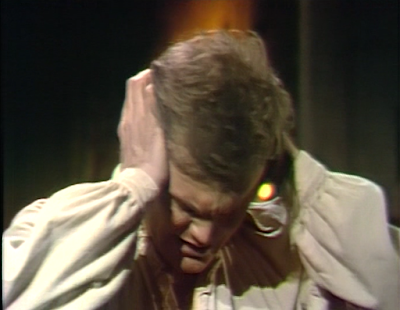 Angelique comes to see Barnabas, and he says she betrayed him. She denies it, explaining that Vicki had to undergo the hanging. She says Vicki will live again, once the two of them leave Collinwood. He doesn't trust her. She tells him that if he doesn't, Vicki will die the most horrible death imaginable. He says that she is wrong, and that she will die. He walks to the door and opens it. Ben enters with a torch, and proceeds to light her on fire. She screams as she burns, while Ben chants, "Burn!" 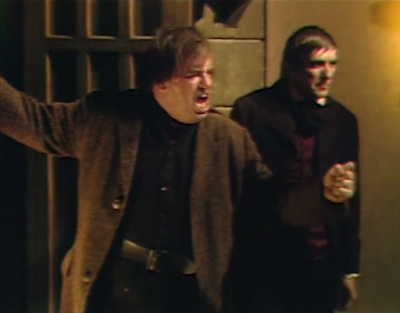 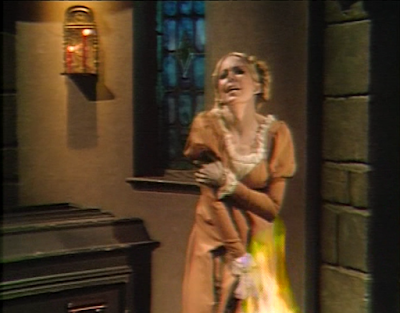 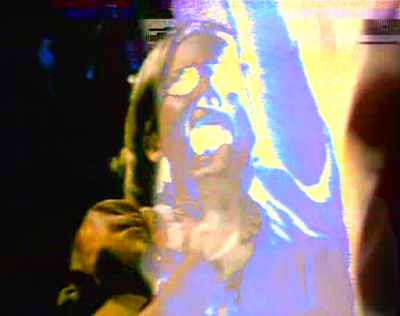 Peter is distracted by a woman screaming when Vicki sits up, alive.

Barnabas tells Ben to spread Angelique's ashes to the four winds. As they leave the room, the Countess sees him, despite knowing that he's dead. She goes into the room he and Ben came out of, and sees the coffin. She opens it. 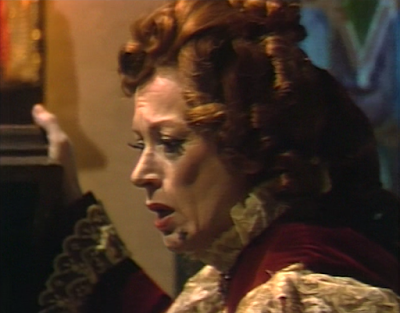 Vicki says she remembers standing on the gallows, and then waking up in Collinwood. Barnabas enters and is shocked to see her alive. 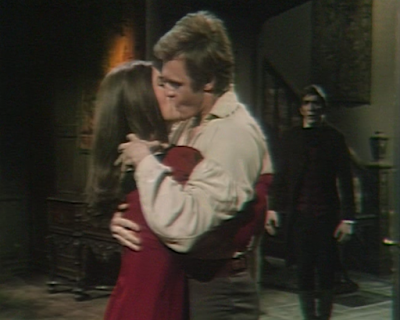 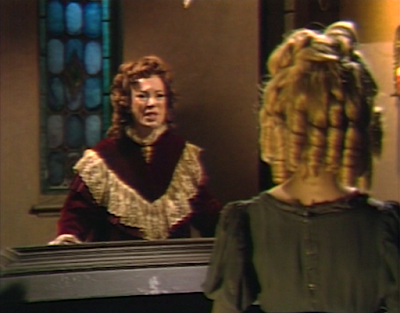 Barnabas says it's a miracle. He explains that Angelique put a spell on her, but it must have been broken when they burned her alive. Peter comes in, and Barnabas tells then to go away, as far as they can. He wishes them happiness. Peter thanks him, and Vicki asks to be alone with Barnabas for a moment. He goes to prepare the carriage, and Vicki tells Barnabas that no matter what happens, she will always remain close to him. She kisses him on the cheek and leaves. 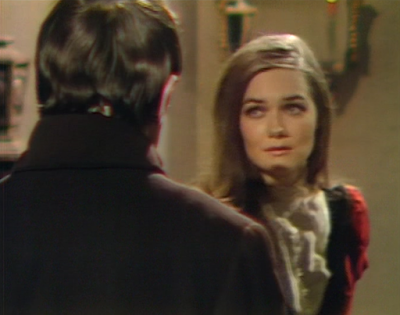 The Countess believes that Barnabas is a vampire. She realizes that he wanted to make Josette like him, which is why she jumped from the cliff at Widow's Hill. She pledges to destroy Barnabas. 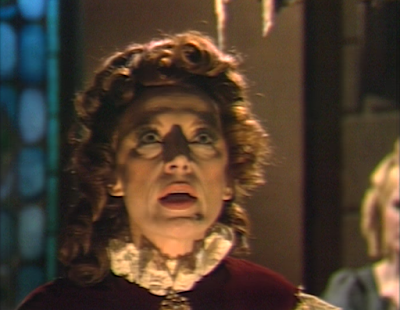 Ben asks where Barnabas will be returning to. He says he needs to be in the cemetery where Ben met him 48 hours ago. Ben agrees to go with him.

In the cemetery, Barnabas returns to the spot where he left Julia. He calls to her in the future, asking her to draw him forward in time. Millicent and Julia watch from the woods. Barnabas says that perhaps Julia was to find him the way Willie found him, and asks Ben to follow him into the mausoleum. He tells Ben to return in the morning and place chains around the coffin. He also asks him to tell his father what happened. 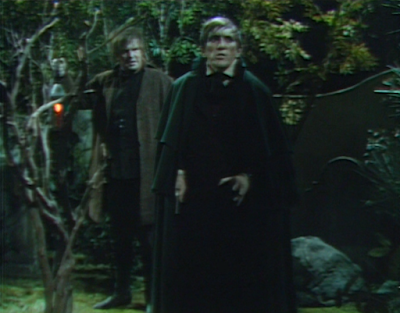 After dawn, the Countess and Forbes enter the mausoleum. She says she had him released from prison to do what must be done. He has a stake in his hand, and she opens the secret door. She tells him to open the coffin. He does, and the find Barnabas sleeping inside. She tells Forbes to destroy him, and he raises a mallet into the air, and brings it down in a crash. 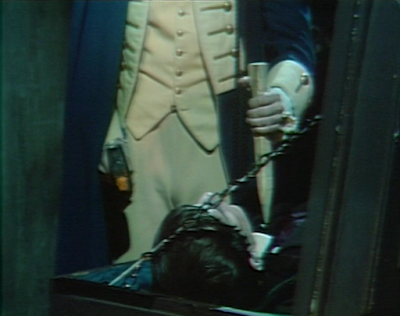 John: So Angelique is giving Vicki the Liz Stoddard/buried alive treatment, though this time she's cutting right to the chase. Makes sense, the way these things can drag on.

Christine: Why torment Vicki just because Barnabas loves her? It's one thing to do away with her to make him suffer, but quite another to make her die twice horribly just because he spurned Angelique. She is really honing her skills at evildoing.

John: I'm sorry, but if Angelique could be done away with a simple impromptu barbecue, she would have been vanquished long ago. This has all the hallmarks of the writers' needing a quick way to wrap up the storyline... As Barnabas tells Ben, it's hard to believe. And particularly hard to believe is that she burned to ashes in a matter of minutes.

Christine: Angelique cannot be killed, only diminished. I only hope her incineration will break Liz's spell too.

John: Was anyone else hoping that Barnabas might have a change of heart and bite Vicki to keep as his own... Instead he lets her go, and decides to take another 200-year nap, all but ensuring he'll return to the future as a vampire. Unless his life is cut short by Nathan Forbes!

Christine: I'm glad to see that Barnabas has learned some selflessness and decided to let Vicki go with the man she truly loves. Maybe he'll mature even more after another 200 years of reflection. The loud bang we heard at the end of the episode didn't sound like a hammer hitting a stake, so I think he'll come out okay on Monday. Dan Curtis spared no expense in this episode, with a total of 8 actors on board for the action today! That may be a record.
Posted by John Scoleri at 6:00 AM

John C., Houston TX: At this point I wish ABC had done a spinoff with Peter and Vicki (Alexandra) starting a new life out west as Peter said they were going to do. Then their fans could have some closure regarding what happened to them.