Carolyn fixes a drink and asks Chris if he likes the cottage. He says it's nice and private, just like he wanted. They toast his new life in the cottage. He tells her that he's going away for a few days. 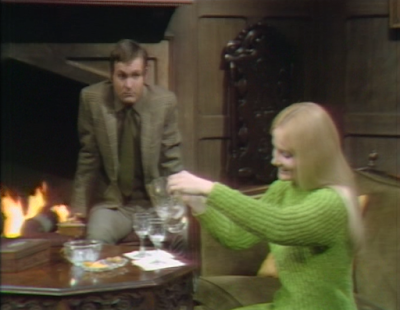 Amy comes in and tells Chris she's glad he'll be closer. Amy sees the pentagram on Carolyn's face, and asks if she's going away. Carolyn says she's not, and Amy tells her that she sees a star on her face, and the only other time she saw that was on her cousin Joe, and then he went away. She tells Carolyn that she hopes she's not going away, too. Carolyn looks in the mirror and sees nothing. 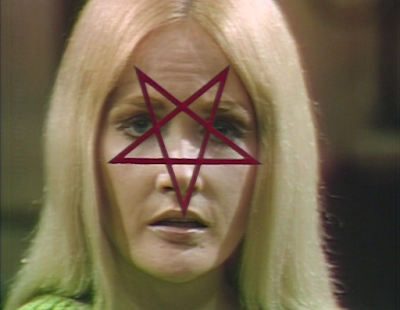 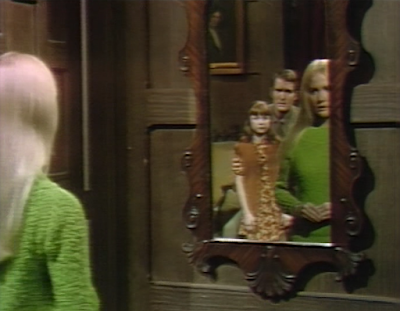 She asks Chris if he saw anything, and he denies it. Amy apologizes for upsetting her. Carolyn says she's not upset, and tells her to run along and play. She tells Chris that his sister is strange, and he tells her that he has to leave. She asks what he's upset about, and he tells her he'll call her when he gets back. 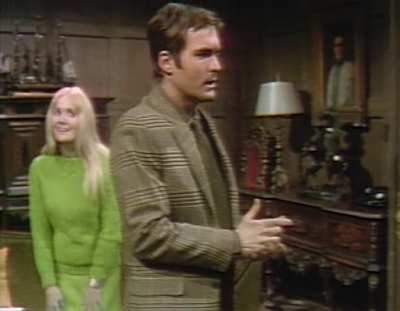 David is failing miserably attempting to build a house of cards when Amy comes into his room. She asks if he spoke to Quentin about Carolyn and Chris. He says he did, and that Quentin seemed pleased. David says he wants to make sure Carolyn stops interfering with them. He says Quentin has a way, but he won't tell him what it is. He tells her that later today, she'll pretend to be sick. She asks if Quentin is going to hurt Carolyn. David asks why she thinks that. He says that Quentin told him after tonight, Carolyn won't bother them again. 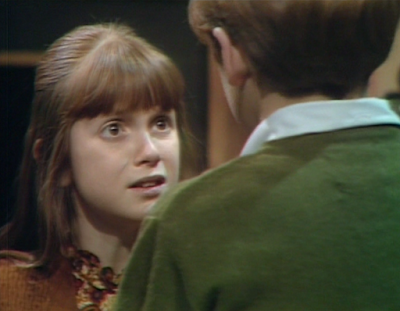 Amy finds Carolyn and asks about Chris. She explains that he's going away for a few days on business.

Chris sits in front of the fireplace in the cottage. He takes off his tie and throws it aside. He then starts pacing around. He opens his suitcase and starts to fill it.

In his room, David asks Amy if she's feeling alright. Maggie tells him to focus on his schoolwork. Amy tells Maggie that she doesn't feel well. She appears to pass out. Maggie takes Amy to her room and goes to get Carolyn. David tells Amy she did a good job. She asks what Chris has to with everything? Maggie brings Carolyn in, and Amy reverts to playing sick. David suggests that she may be feeling this way because Chris was leaving. Maggie suggests that seeing Chris would help. Carolyn goes downstairs to call him. 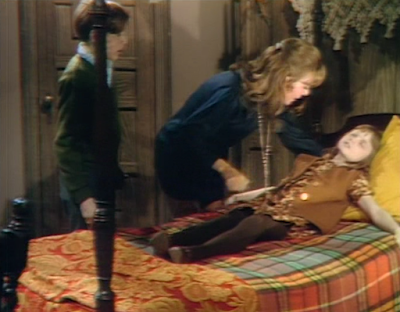 Chris hears the phone ring in the cottage, but refuses to answer it. He finishes packing his suitcase.

Carolyn hangs up the phone.

Maggie tells Amy that she'll be alright, and Chris will come to see her soon. Amy says she dreamed of Chris saying goodbye to her. Maggie says that Carolyn went to get Chris, and goes downstairs. Amy tells David she doesn't understand what Chris has to do with all this. He feigns ignorance, and tells her she's afraid. She asks what will happen to Carolyn and he tells her nothing bad. He just wants her to leave the house, probably to scare her on the way to Chris' cottage. Carolyn comes in to ask how Amy is feeling. David asks about Maggie, and Carolyn says she went to the cottage to get Chris. They look worried. 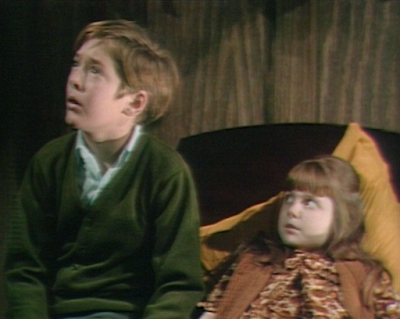 Chris looks out the window, and then starts struggling, as if he's about to turn into a werewolf. Maggie arrives at the cottage, and asks him to let her in. She says it's about Amy. 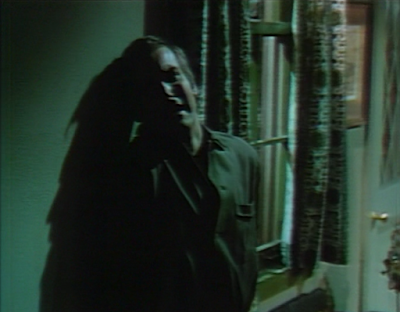 John: The day Chris moves into the cottage, he says he's leaving to go out of town for a few days? I guess that since he's now living rent free, he can afford to travel!

Christine: Not only rent free, but with access to free booze from his own personal mixologist. I guess Carolyn is no longer stressing over whether her mother is buried alive or not. 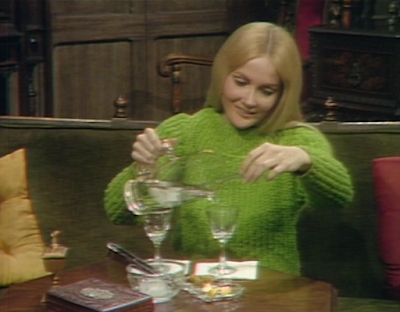 John: Amy's glassy-eyed stare when she saw the pentagram on Carolyn was almost as eerie as silent Quentin appearing before Mrs. Johnson yesterday. And I don't know about you, but the pentagram-cam is pretty unsettling. 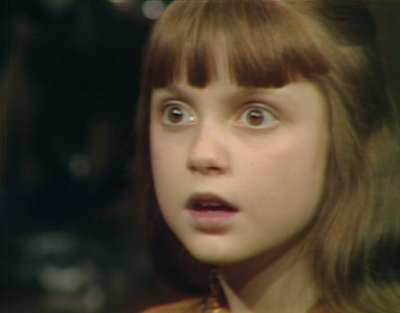 Christine: I think the pentagram-cam is so unsettling because of how the actors appear suddenly frozen whenever it appears on their faces. Here's a collection of pentagram-cam appearances we've seen so far: 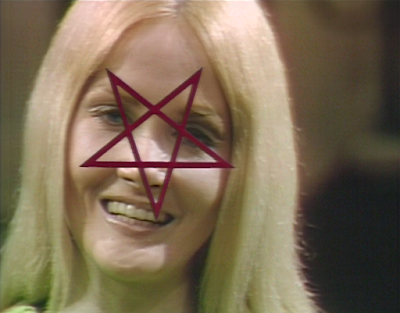 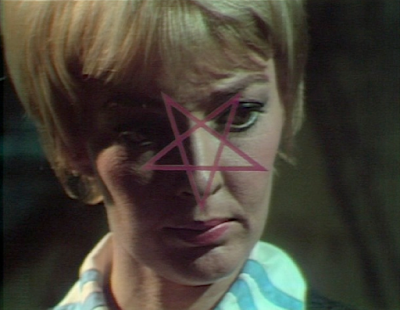 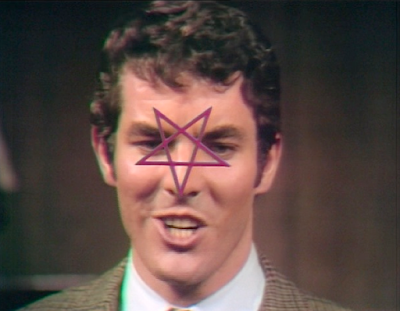 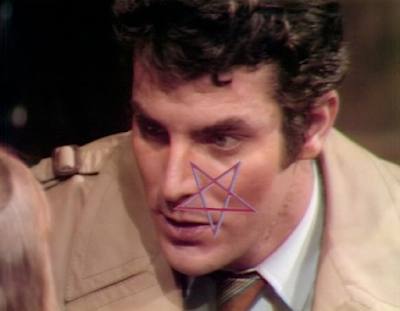 John: I'm giving Chris the benefit of the doubt that he was about to turn into a werewolf as Maggie arrived. I figure it was that, or he really needed to go to the bathroom... 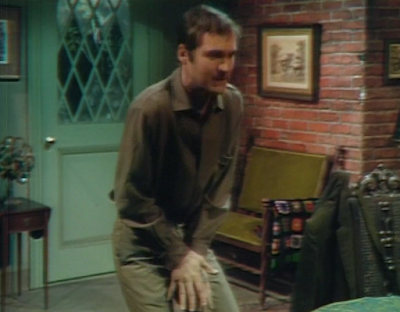 Christine: Maybe the toilet's not working at Matthew Morgan's cottage. It looks like Maggie has loaned Chris her quilt, as it can be seen draped over the arm of the chair in the cottage.