Mrs. Johnson returns home from the supermarket, and Maggie tells her that Carolyn asked that she prepare Matthew Morgan's cabin for Chris Jennings. Mrs. Johnson says they should have burned it down after Matthew died. She says the place is cursed. She says she'll find Harry to help her get started with it. 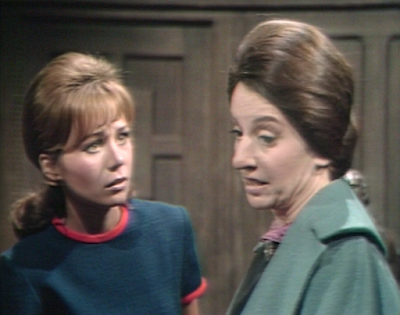 David and Amy play cards, and she asks him if there's really a curse on Matthew's cottage. David says no, but Mrs. Johnson thinks so. He says he'll go talk to Quentin, when they hear Maggie approaching. David asks Maggie if Mrs. Johnson will be alright. He says that she's been jumpy lately. David asks if they can go outside, and Maggie says that it's too late. He asks Maggie to play hide and go seek with them. They tell her to count to ten and then try to find them. She does, and they sneak through the secret panel. Maggie reaches ten and starts looking for them, but can't find them in the drawing room. She leaves and runs into Mrs. Johnson and Harry leaving to clean out Matthew's cottage. 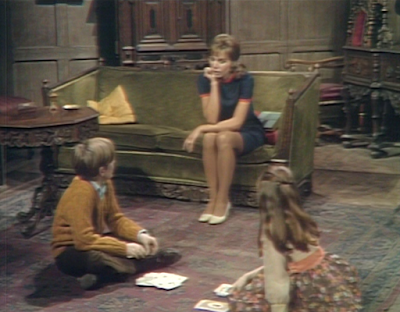 David and Amy hide along the path to Matthew's cottage. Mrs. Johnson and Harry walk by without seeing them.

Harry tries the door and says that it's locked. She unlocks the door with her key and they go inside to start cleaning.

Maggie can't find Amy or David. She calls to them, telling them she gives up.

Mrs. Johnson dusts, and Harry complains about it not being light enough. She sends Harry back to Collinwood to get more light bulbs. 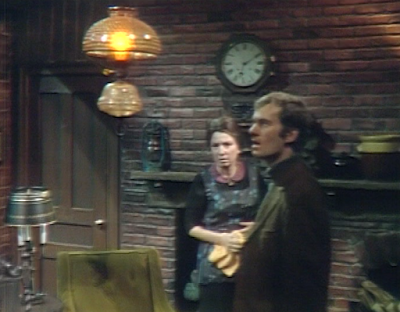 David locks the door to the cottage from outside. 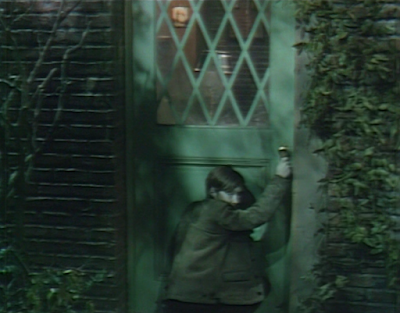 As Mrs. Johnson dusts a lamp, the light goes out. She goes to the front door and finds it locked, assuming Harry did it. She gets matches and lights a candle. She turns and sees Quentin standing before her. She runs to the door, but it's still locked. When she turns back, he's gone. 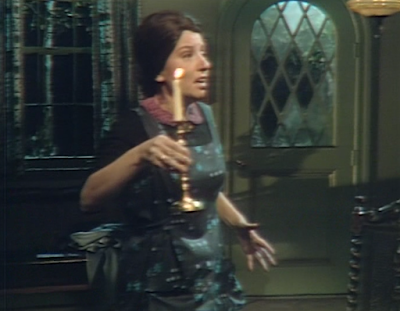 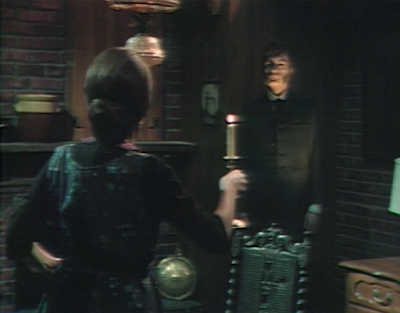 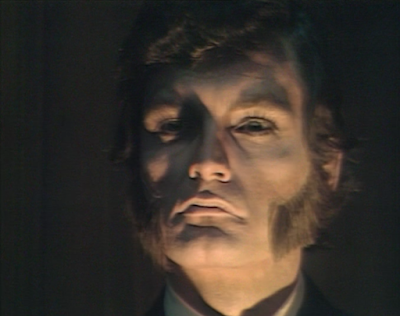 Maggie continues to call for Amy and David, obviously angry. Harry comes in, and she asks if he's seen the children. She asks him to help her find them. He says he has to get light bulbs for his mother. She says this is more important, and sends him upstairs. 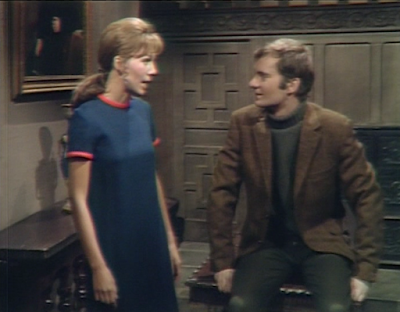 She steps out on the porch and calls to them. They respond that they're by the trees. She finds them outside and tells them they weren't supposed to leave the house. David explains that was before she agreed to play with them. 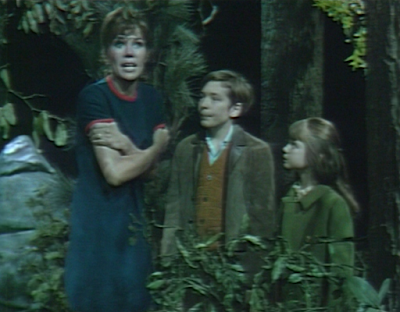 Mrs. Johnson wonders what's taking Harry so long. She lights another candle. Quentin picks it up and approaches her. She screams for him to identify himself. 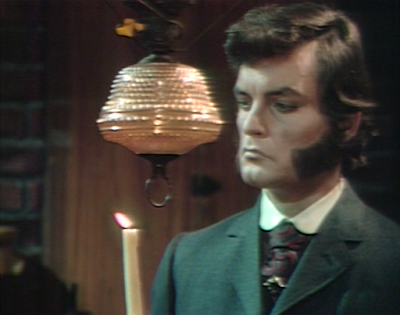 In the woods, they hear screaming, and David says it sounds like it's coming from Matthew's cottage.

Mrs. Johnson pounds on the door and pleads for the man to stay away from her. Maggie and the kids arrive and open the door. They ask her what's wrong, and she says there's a man. They tell her that there's no one there. She says he must have run off when they arrived. Daniel says they won't let him hurt her, whoever he is. Mrs. Johnson says she's not crazy, and she wants to leave. They take her out of the cottage. 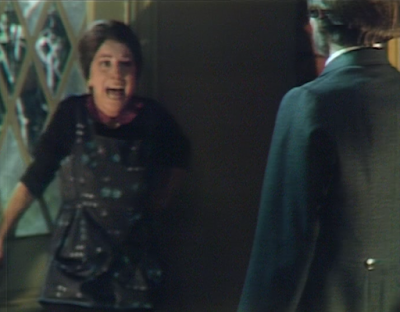 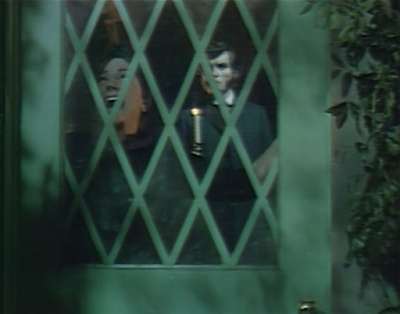 Harry comes downstairs looking for Maggie when she and his mother return. She tells him not to speak to her. She says no thanks to him, she might be dead. She asks him to get her some water. David says she's okay now that she's back in Collinwood, and the kids leave. She tells Maggie that they have something to do with it. She tells Maggie that the man in the cottage was dressed just the way the kids were dressed when she caught them playing last night. 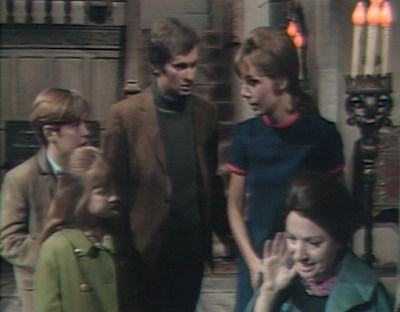 Quentin steps out of Matthew's cottage. 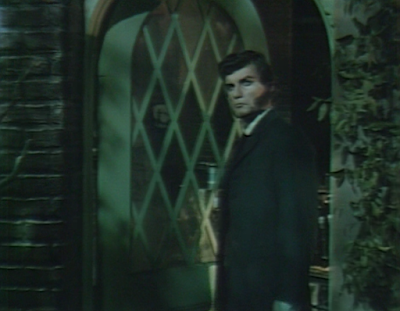 John: Fake Harry Johnson alert! While he looks nothing like the useless Harry we've come to know and love, he actually does a fine job mimicking his unique delivery. I do love when his Mom calls him a ninny. 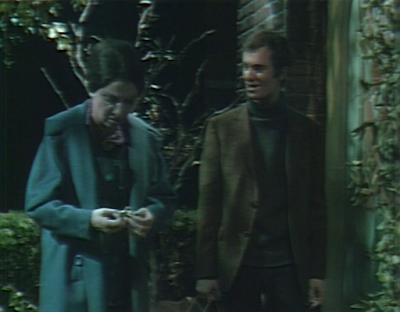 Christine: And I love when he calls her uptight and she doesn't know what that means. The spirit of Harry Johnson lives on, but the character does not. This is Edward Marshall's only appearance as Harry Johnson, though we'll see him appear once more on the show.

John: Creepy Quentin alert! Call me crazy, but the silent Quentin might be one of the scariest images on the show to date. I hope he's going to stick around for a while! 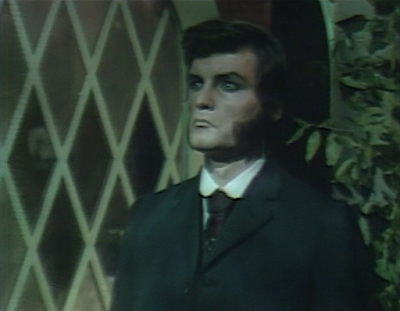 Christine: I might have to agree that his sour puss is one of the scariest things we've seen yet. I do wonder how Quentin got out of his room. I thought he was stuck in there listening to his Victrola while having to resort to using his little minions do his bidding. Dan Curtis said they never wanted to let Quentin talk because he was so frightening as a silent figure.

John: Mrs. Johnson is convinced the kids are evil, and yet despite the fact that they had just pulled a fast one on Maggie, she's unwilling to believe it? Come on, Maggie! Wise up! Those kids will be the death of the lot of you if you're not careful.

Christine: She may be only a few weeks on the job, but she really should know better than to engage in a game of hide and seek with those two. Luckily, she's still on their good side, but just wait until she punishes them and ends up playing the pissed off Quentin game.
Posted by John Scoleri at 6:00 AM

Man, did I love this episode! Mrs. Johnson at her best (worst), the "new" Harry Johnson, the creepy kids, menacing Quentin and a nice dose of KLS. Let's savor silent Quentin while we can, cause I'm afraid once he starts talking, he may never shut up!

This is one of the few episodes that as an adult actually scared me. Usually if I get creeped out it's from memories of watching a certain sequence as a kid. We're not up to those episodes yet (I started watching around the fall of Collinwood). But Mrs. Johnson turning and Quentin standing there made me jump!