David is up in his room. The lights go out again. A chill comes over him, and he realizes that the spirit has come back. He calls out asking who it is. The door swings open, and a body is hanging from the rafters outside his door. He calls for help, but no one comes. David closes the door and wheels back into his room. 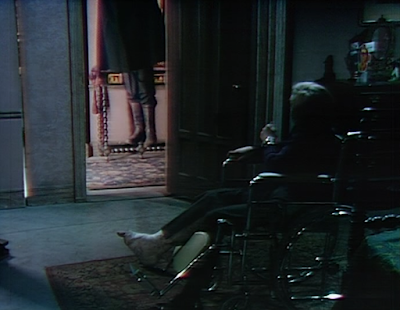 His door opens and Bruno comes in, asking what happened. David explains what he say, but there's no one hanging in the hall. David asks where Jeb is, and Bruno says he was sent because Jeb had to see someone after Elizabeth told him about the book burning. Bruno asks him about what happened last night. David describes how the book caught fire on its own. Bruno says that the only thing that's obvious is that someone beyond the grave is trying to contact him. He adds that only the spirits of those they have killed would dare to harm them this way. Carolyn prepares to take Sabrina to get her hair done. She wants to help Sabrina look like she did when Chris was engaged to her. Sabrina is apprehensive. They don't hear Bruno come downstairs and eavesdrop on their conversation. He comes in, and Carolyn introduces him to Sabrina. She appears put off by him. Bruno tells Carolyn that David was entertaining him with the family history, and he asks her if there's a book with more information. She says there is, and goes to get it. 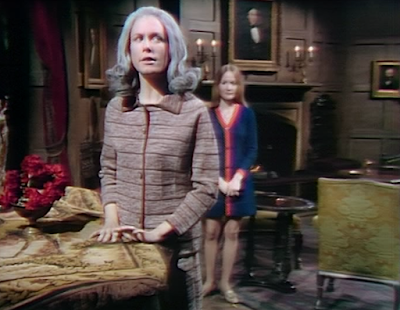 Alone with Sabrina, Bruno asks her if she knew there was going to be a full moon tomorrow night. She says she'll make a point to stay indoors. He tells her that's good, because he might not be there to save her. Carolyn comes in with the book and Bruno thanks her, and leaves. Sabrina says she doesn't think he can be trusted. Carolyn tells her that she used to agree, but now she thinks he's harmless. 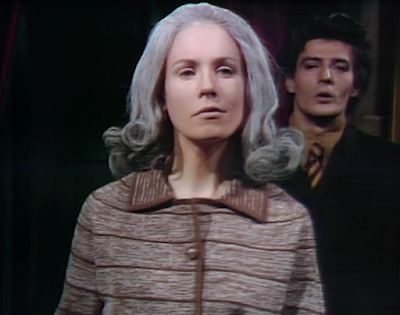 In David's room, Bruno reads the book. He says the family history doesn't mention the Leviathans. He starts downstairs, but the lights go out. He tells David that someone is choking him. David watches as he seemingly throws himself around the room. He falls to the ground, and pulls a noose off his neck. Bruno says it's old and covered in mildew. David asks how it got around his neck. Bruno says whoever did it was trying to kill him. He tells David that he'll be fine. Bruno says he'll get someone to move David to another room. 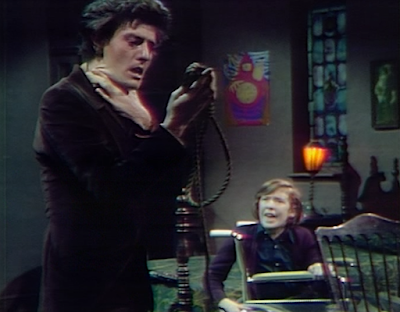 Carolyn returns with Sabrina, with an all-new hairdo. Bruno comes downstairs and asks Carolyn to come to David's room. They go upstairs, and Sabrina admires her new hair in the mirror. 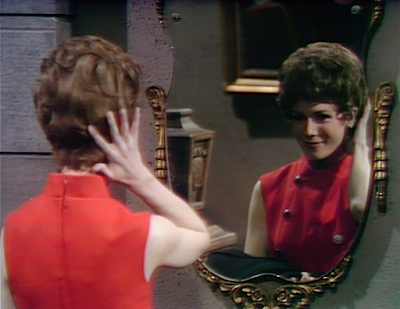 David tells Carolyn he's afraid to sleep in his room. She agrees to put him in another room.

There's a knock on the front door, and Sabrina opens it for Chris. He's surprised to see her new hair. He tells her she's very beautiful. She says she was afraid he might not have wanted to remember her. 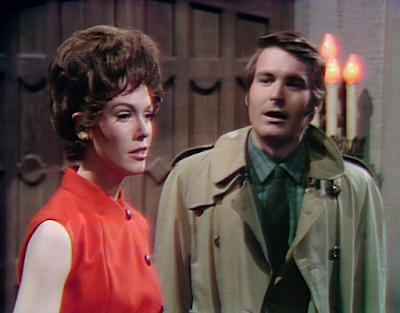 He realizes that he must not lose sight of the tragedy they've faced. She tells him that she wants tonight to be special, and they kiss. Bruno watches them from the foyer. Sabrina asks Chris if they can go to the cottage, and they leave together. 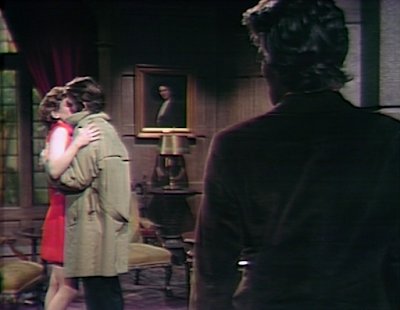 Bruno starts after them, but Carolyn comes downstairs. She asks where they are, and he tells her that she just left with a young man. She asks if he met Chris, and he says they were leaving as he was coming downstairs, and they didn't see him. He asks her about them, and Carolyn says they had been engaged, but something went wrong. She says Chris is a strange young man. Every once and a while he gets moody and disappears for a few days. Bruno thanks Carolyn for her hospitality, and rushes out. 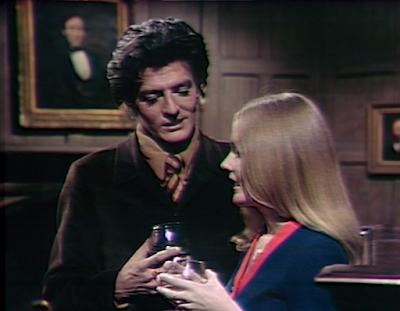 Sabrina and Chris kiss in the cottage, but he pulls back. She says they can't let anything interfere like the last time. She says she accidentally saw him transform just days before the wedding, but now they shouldn't let anything stop them. He tells her that she would be living in constant danger. He says he doesn't want to talk about it. She asks if he loves her, and he says it's not a question of love. He tells her that if they find a cure, maybe they can talk about having a future together. 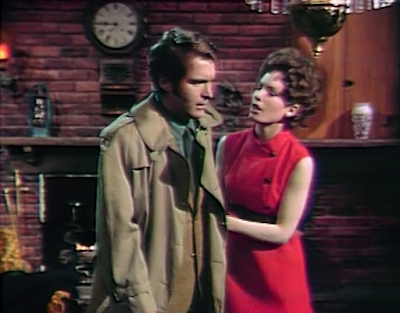 They leave the cottage, and Bruno comes out of the shadows where he had been watching them. He goes into the cottage and looks around. He finds a chain and handcuffs, Bruno checks his pistol. He hears someone and hides. Chris comes back in alone and sits in a chair by the fire. He sees the chains on a desk with a flashlight. Bruno pulls a gun on him and tells him to turn around. Chris asks what he wants. Bruno says they're going to watch the full moon rise together, and laughs maniacally. 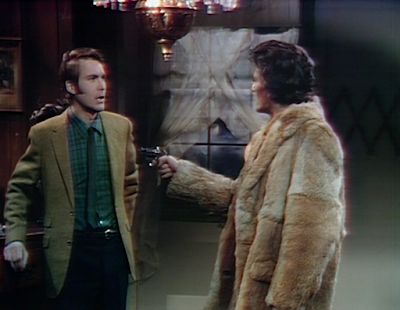 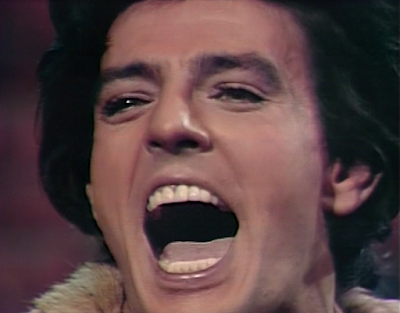 John: Bruno thinks it MIGHT not be mentioned in the family history if they had interactions with the Leviathans? And here I thought Aristede was the dumb one...

Christine: I wonder why David allowed him to waste his time going through the family history books at all, since he has always been the go-to expert on the Collins family history. Remember back when Willie was using him as a source of information when he went looking for the family jewels in Barnabas' coffin?

John: Not since Star Trek has an actor thrown himself around a set less convincingly than Bruno does when being 'strangled' by the invisible intruder in David's room.

Christine: It makes me wonder if it was David Henesy rather than David Collins that was asking "What are you doing?!" Hopefully none of his cool toys were damaged in the process. We did get to see a nice shot of the Petofi box on the table in the hallway. 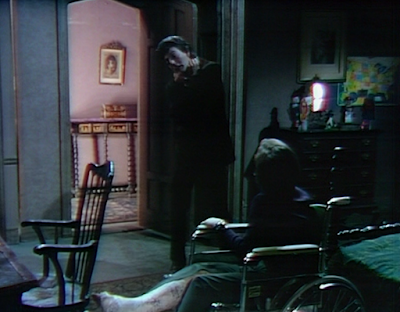 John: Glad to be rid of Sabrina's grey wig, but what does it say about Chris that his interest in her is rekindled.

Christine: It could suggest that he's a superficial louse, but I think it's more likely that he realizes his lycanthropy reduces his chances of finding a mate, and he should take what he can get.

John: Did anyone else notice someone outside the window of the cottage when Bruno confronted Chris? At first I thought it might be someone who would come rescue him, but they I realized it was probably just a crew member hanging out, not realizing that he could be seen in the shot...