Angelique offers Carolyn and Elizabeth something before she sends the servants back to the mainland. They decline, and Angelique leaves. 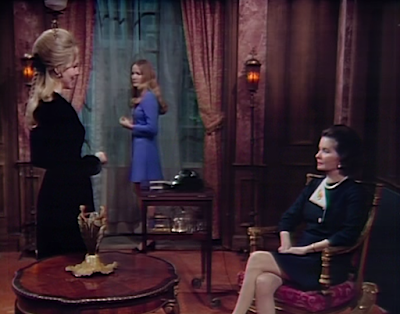 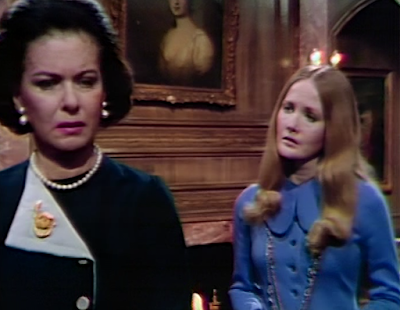 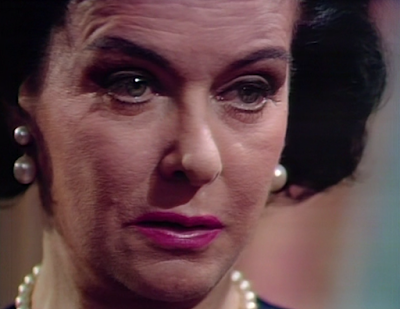 Angelique returns and says they're all alone together until her husband returns. Elizabeth asks how they found the place, and Angelique says that her husband lived there when they met. She says that she wasn't accustomed to isolation. Elizabeth asks her how she met Barnabas, and Angelique says that they met while she was modeling in England, and they stayed in touch after he moved to the states. Elizabeth says she can't get over the feeling that they've met before. The phone rings. It's her husband calling for her to come pick him up at the airport. She apologizes to Elizabeth, and says she'll be back in a few hours. She tells them to make themselves at home. 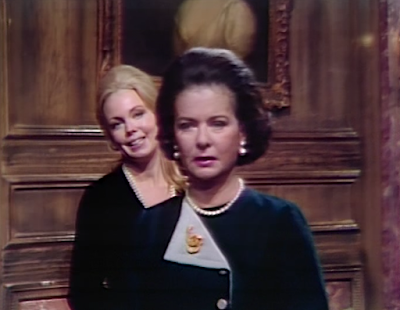 After she leaves, Carolyn asks her mother why she was so inquisitive, The phone rings again, and it's Jeb calling for Elizabeth. He says they've never met, but that she knows who he is. She confirms it. He tells her that she must return to Collinwood immediately on her own. He says that he and Barnabas discussed it. He adds that she will not tell anyone there that Mrs. Johnson called. She says she understands, and address Mrs. Johnson before hanging up. Carolyn asks what Mrs. Johnson wants. She tells Carolyn she has to go back to sign some papers. 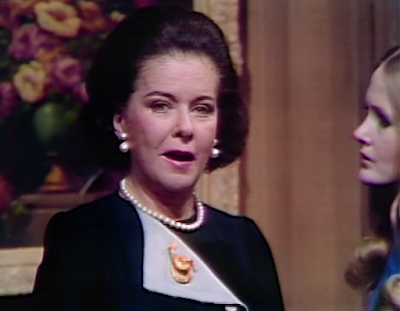 Jeb looks at Carolyn's picture and says she will soon see him as he really is. He returns to his room, and the labored breathing can be heard inside. 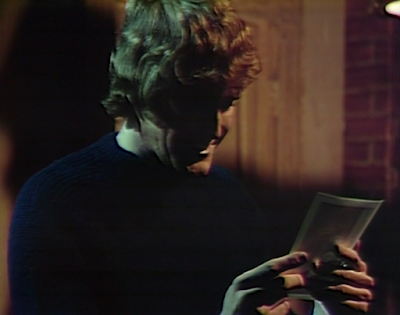 Elizabeth tells Carolyn that she'll be back as soon as she can. She says that they've accepted Angelique's hospitality, so they couldn't both leave without an explanation. She leaves Carolyn alone in the house. 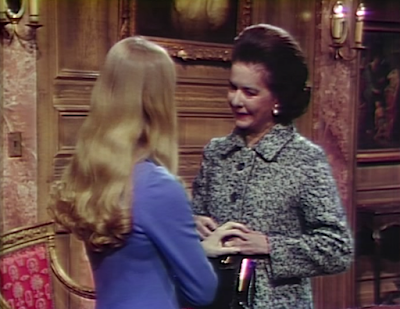 Elizabeth drives away, and something rustles in the bushes outside.

Carolyn picks up a book and sits down to read, but is preoccupied thinking about Jeb. A painting falls off the wall, startling Carolyn. She picks it back up. She then picks up a broken cup that she dropped. The front door blows open, and she runs to check it before closing it again. There is more rustling outside the house. 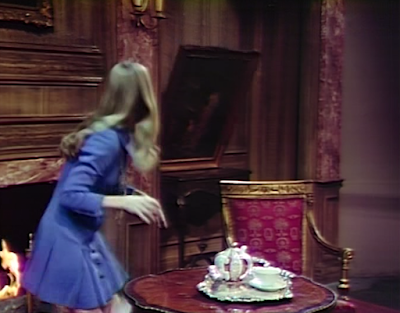 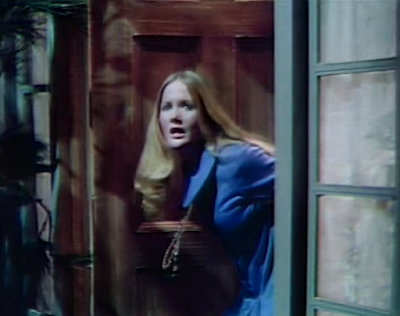 Carolyn returns to her book when the phone rings. She answers it and takes a message for Angelique's husband. She then hears footsteps and a door shut. She asks who it is. The lights go off and she screams. She tries the light switch but the power is off. She hears a crash as a branch comes through the window. 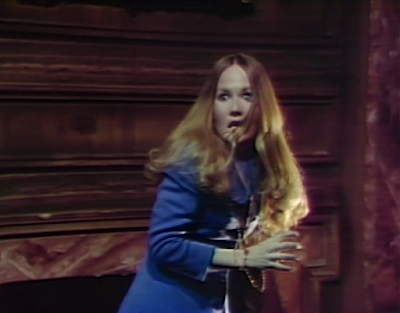 Carolyn runs to her bedroom, and is upset that the power is out there, too. She hears footsteps in the hall. She listens at the door and hears music playing. She steps out into the hall, following the music. She sees a shadow on the door to the room where the music is coming from. She pulls the door open and screams at the sight of a strange man. 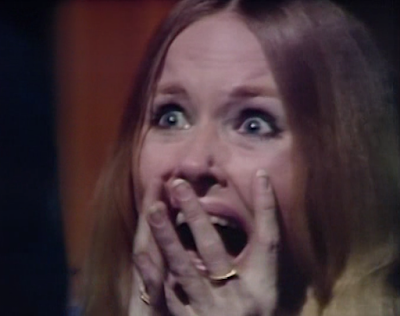 Angelique's husband fixes Carolyn a drink. She asks where Angelique is, and he says they missed connections, so he took a cab. He apologizes for the circumstances under which they met, and for the power being out. He blames the storm, and says it will be fixed tomorrow. 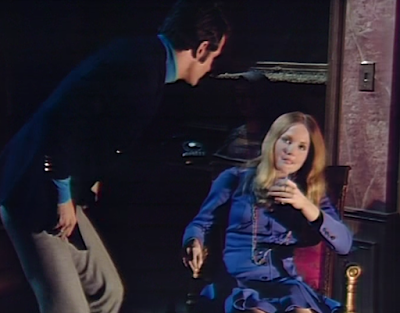 Carolyn says there was a call for him earlier. He steps into the next room to make a call. Carolyn dozes off, and has a dream.

She's looking for Jeb in the antique store. She asks him to come into the light. He asks if she ran away because she doesn't like him. He talks like they've had an intimate relationship. She doesn't understand. He steps into the light and shows off his birthmark. 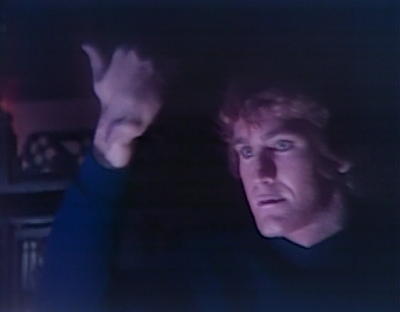 He asks if she remembers him as Joseph, or Alexander. He then asks if she liked him best as Michael, before he grew up and became Jeb. She can't believe they're all the same person, and he tells her that it's true, and he knew she'd come back. 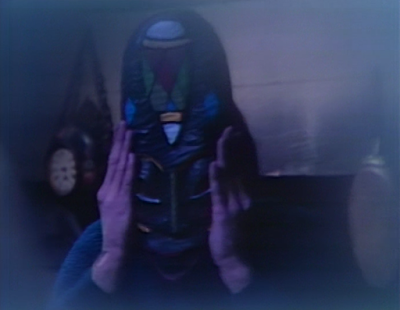 He says she's all his, and commands her to come to him. She sees blood on his hands. He says he knew he was the one to give her a whole new life. She screams out, "what have you done!" 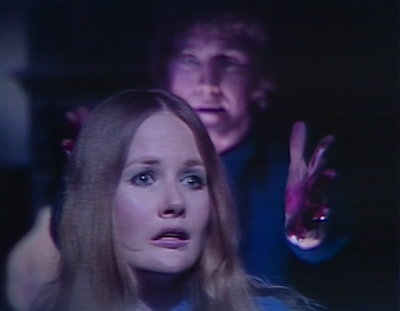 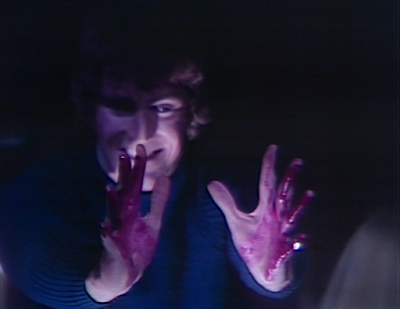 Angelique's husband wakes her and offers to take her up to her room.

Outside, the labored breathing can be heard.

Angelique's husband takes Carolyn to her room and bids her goodnight. He then goes to the door and opens it. 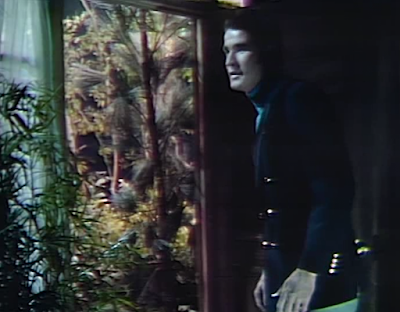 Strange leafy footprints are on the floor throughout the house. 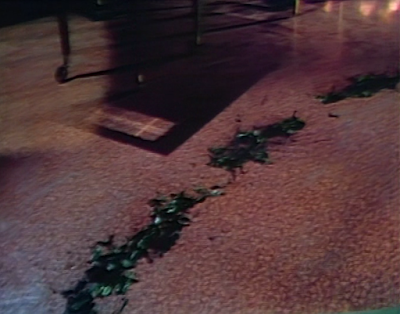 Carolyn wakes to the sound of shutters slamming. She gets up and closes the window. She then hears chains and labored breathing outside her door. She calls to Angelique's husband for help. The door to her room swings open, and she screams. 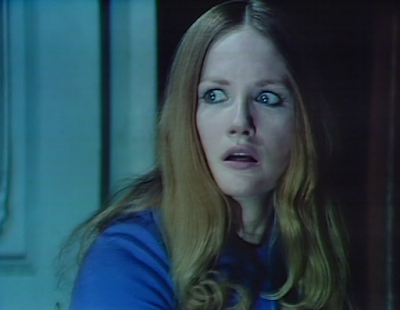 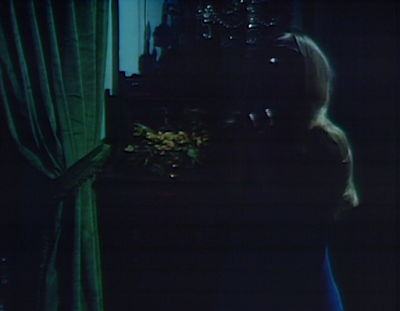 John: Am I correct that Angelique lives on an island? She did send the servants off to the mainland. If so, where exactly did Elizabeth drive off to?

Christine: That is a good question! So, I can sort of understand Liz and Carolyn not being able to recognize Angelique without her goofy Cassandra wig, but I find it extremely difficult to believe they would not recognize the distinctive portrait that hangs in her house as the same one that possessed Roger, and not be able to make the connection between the two.


John: Carolyn finds out all of Jeb's secrets in a dream. Do you think she'll remember it when she's awake? Perhaps more importantly, will she believe it?

Christine: She may remember it and not care once Jeb has used Leviathan mind control on her.

John: So do you think Angelique's husband was actually Jeb in disguise, or is he secretly a Leviathan member who let the unseen Leviathan creature into the house to get to Carolyn?

Christine: I don't think he was Jeb in disguise because Jeb was in his true heavy breather form. Sky is either part of the Leviathan club, or is conspiring with them. What was up with Jeb impersonating Jacob Marley with the rattling chains? Are they to be used as part of the Leviathan marriage ceremony?