Jeb pours Carolyn a drink to celebrate her liberation. She says she doesn't understand, and he says she will soon. She reluctantly drinks from the glass. She goes to the window and says there's no sign of Megan and Philip. She says she's anxious to leave, and then she stumbles. She says everything is blurry, and then passes out in his arms. 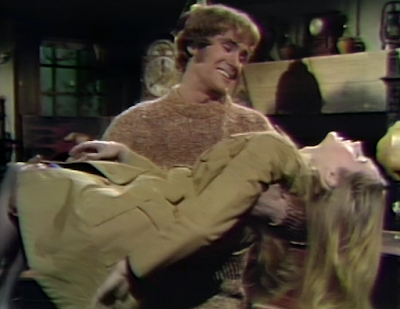 He says that it's the beginning of her new life and takes her upstairs. Quentin bursts in and tells Jeb to put her down. He says he's taking her back to Collinwood. Jeb punches him and they grapple, knocking over antiques. Jeb comes at Quentin with a knife, but Quentin is able to fend him off. He breaks something over Jeb's head. 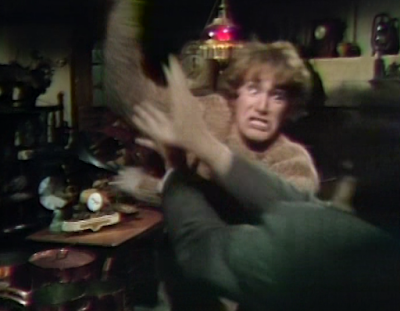 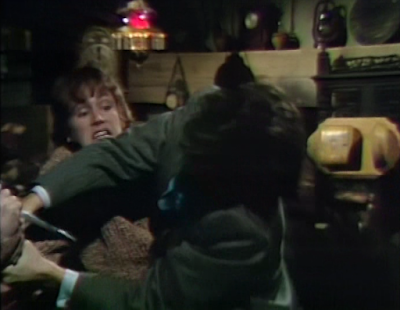 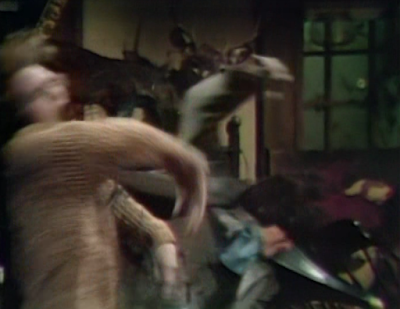 Barnabas wonders where Quentin is. He worries that Jeb might get back to his room and change. Maggie comes downstairs and asks him where he's going. He says he's going to Collinsport and she offers to join him. Based on his response, she accuses him of lying. She says that if he's going to the antique shop looking for Carolyn, she'll go with him. He tells her not to go near the shop, and agrees to meet her at 10pm. 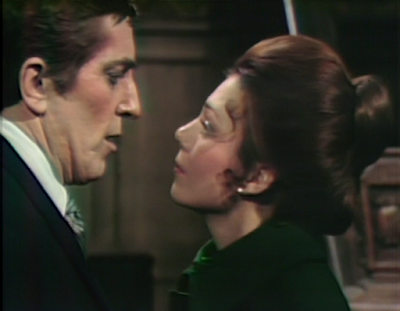 Elizabeth comes in and tells Maggie she needs to pick up the needlepoint. She leaves and Elizabeth asks Barnabas if she has done something wrong. She points out that she has been ignored by their leader. He assures her that she'll meet him soon enough. There's a knock at the door and Elizabeth answers, hoping that it will be Jeb. It's Quentin with Carolyn. 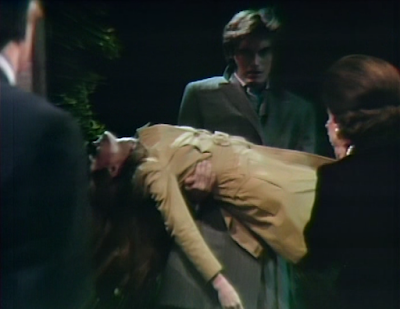 Jeb comes to, bleeding from the head. He angrily tosses aside antiques and swears that he will get Quentin. 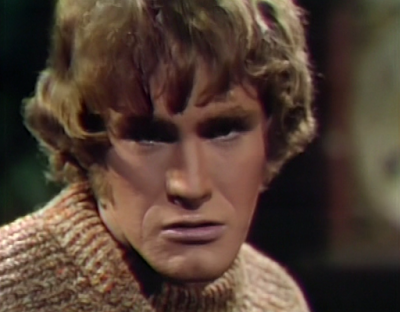 Barnabas leaves a message for Julia to come to Collinwood. He then tells Quentin that he should have gone. Quentin tells him that they need to think he's still a Leviathan. Barnabas tells him to leave Collinsport, and Quentin says that he'll be fine. He asks when Barnabas will tell Elizabeth. He says she was shocked to hear his name. He asks what they'll do with Carolyn, and Barnabas says they'll do something. He asks Quentin to stay with her. 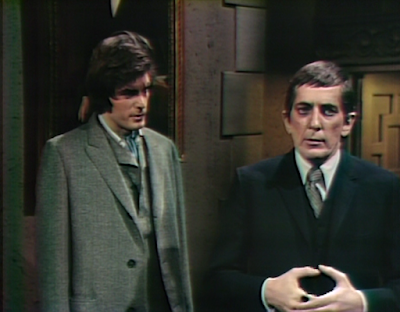 Elizabeth tries to wake Carolyn. Barnabas comes in and tells her that Julia is on her way. He says Carolyn went to the antique shop and fainted, which is where Quentin found her. He tells her that she should thank him for returning her. He tells Elizabeth to go talk to him. She points out that it's so strange, his being a descendant of Quentin. She adds that she didn't know Quentin had any children. She goes downstairs after asking Barnabas to let her know immediately if there's any change with Carolyn. 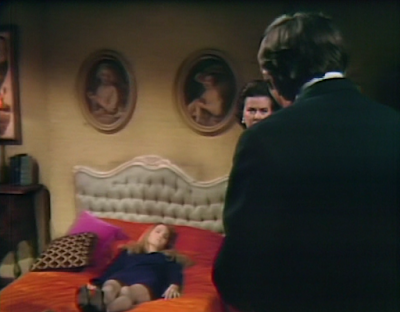 Jeb stares up at Carolyn's window.

Quentin tells Elizabeth that she doesn't need to thank him. She says it was fortunate to find her. She screams as lightning flashes, saying that she saw someone outside. Quentin looks and sees no one. 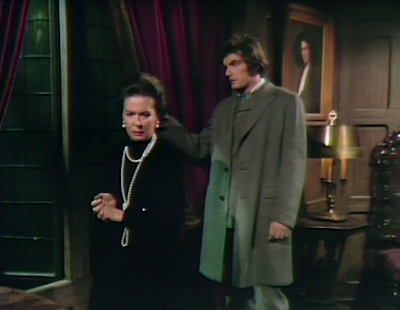 Barnabas comes downstairs and Elizabeth asks what Julia has found. When Quentin hears that Carolyn is alright, he leaves. Barnabas tells him he shouldn't go with the storm out, and Quentin says he'll be careful. He leaves, and Barnabas tells her that Carolyn's ailment is the result of her father's death, and he says they think she should take her away. Elizabeth asks him if she's in danger—if the Leviathans consider her an enemy. He says that she is not an enemy. Elizabeth says she can't wait to see their leader in his natural state. He says it's not a pleasant sight and she's shocked he would say that. She asks again about Carolyn. He says when she becomes one of them, she must be in the best possible condition, so she must take her away. He says he has arranged a retreat for the two of them on a local island. He tells her that they will leave within the hour. 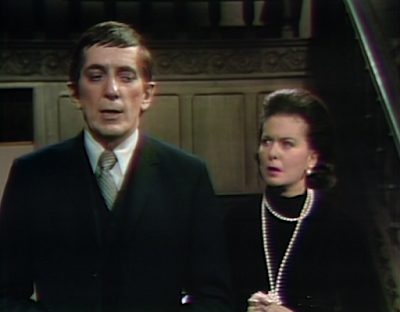 Jeb continues to watch Carolyn's window when he hears something. He hides behind a tree as Quentin walks by. He does again as Maggie walks by, but she sees him. She asks what he's doing there. He asks her why not. He says he's waiting for Carolyn. She starts to leave and he grabs her. He tells her not to go. 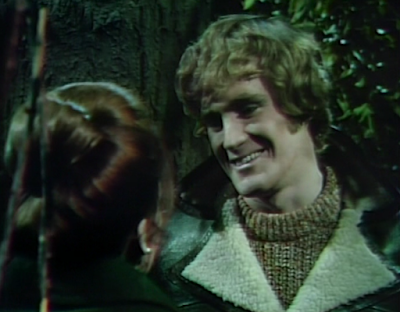 Elizabeth leads Carolyn downstairs. She says she was in the shop with Jeb, and asks why he didn't take her home. She picks up the phone to call him. Barnabas comes in and tells her that she'll feel better soon. She says she can't leave until she finds out what happened to her father. He says they love her and want her to be happy, and that's why they're treating her this way. He explains he has to meet Maggie at 10pm, and leads them out. 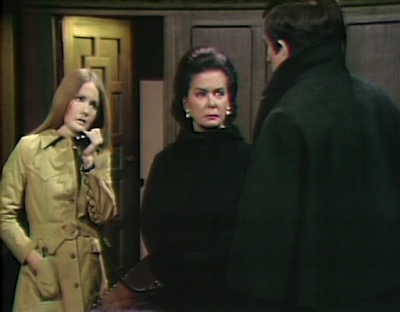 Jeb returns to the antique shop alone. He picks up some items off the floor. Barnabas enters and asks where she is. Jeb asks if he doesn't already know where Carolyn is, and Barnabas says he's talking about Maggie Evans. Jeb says Barnabas could have stopped Elizabeth from taking Carolyn away. Barnabas says that it's not the time to bring Carolyn there, but he wants to know what Jeb has done with Maggie. Jeb says he doesn't know where she is, nor does he care. Barnabas asks if he killed her. Jeb asks if he should have. Jeb accuses Barnabas of being friends with Quentin. Barnabas says it was a coincidence that he was at the house when Quentin returned with Carolyn. Jeb says Quentin is going to be a very unhappy man. Barnabas tells him to leave Quentin to him. 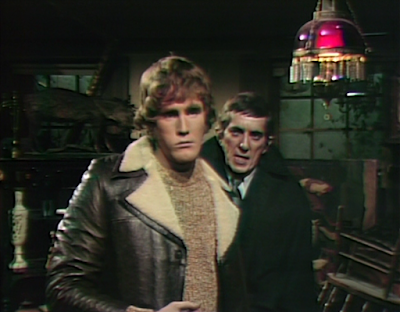 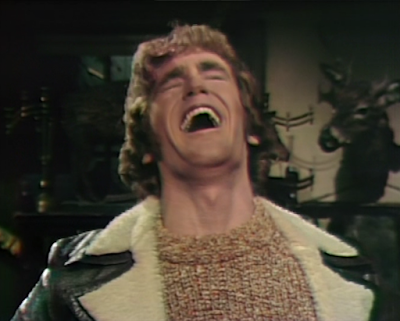 In the cemetery, Maggie lies unconscious on a slab. 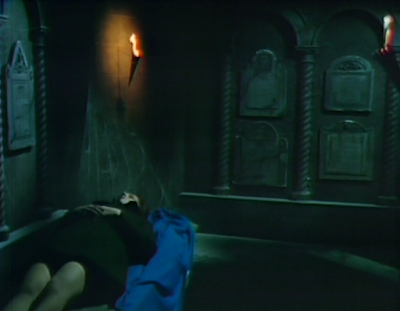 John: So Barnabas couldn't kill Jeb with a huge dose of poison, but Quentin could knock him out with a blunt instrument? I was kind of hoping Quentin would wolf-out and take on Jeb in that form.

Christine: It's on! It should be fun to watch these two continue to throw down whether in human form or not. Considering Quentin has been around for over a month with nary a transformation, we might assume that his Dorian Gray style portrait may be conferring some werewolf prevention benefits.

John: Elizabeth really wants to punch the 'Jeb' box on her Leviathan membership card. She really conveyed shock when Barnabas described him in his true state as unpleasant... but it's not like he isn't unpleasant in his Jeb form!

Christine: Although we haven't seen his Leviathan form, it seems likely he is even more grotesque in human form. Either way he's slimy.

John: Wow, Jeb really needs to work on his fake laughter. That was the worst performance I think we've seen in a long time, and in Jeb's case, I'll give him credit for being a classic 'love to hate' character from the day he set foot on the scene!

Christine: He really hit the high notes on his guffaw. Poor Carolyn. Her only prospects are a creepy underworld monster and her incestuous werewolf uncle. By the way, whatever happened to Willie Loomis? He was last seen in Episode 696. He will be quite unhappy to find out that Barnabas is getting cozy with Maggie Evans. 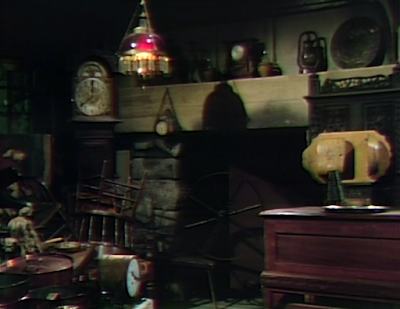