Jeb holds out the Leviathan box and tells Maggie to open it. She asks if he'll turn her into the walking dead like Sheriff Davenport if she doesn't. He tells her that the dead don't walk or speak, so she's mistaken about Davenport. He tells her to put her hand on the box, and she does. He tells her everything will be fine once she opens it. She lifts the lid, and he tells her to look inside. 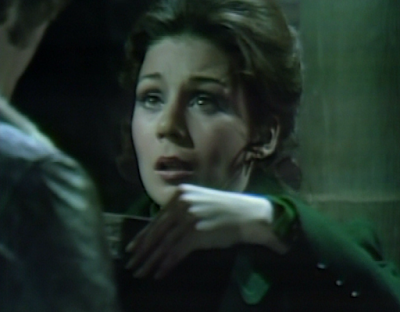 Barnabas checks in with the police again, but there's still no word on Maggie. Julia says he should have told them to go to the antique shop. Barnabas says that if he is to defeat the Leviathans, he must do it from within. He says he'll talk to Philip and Megan to see if Jeb has told them more than he knows. 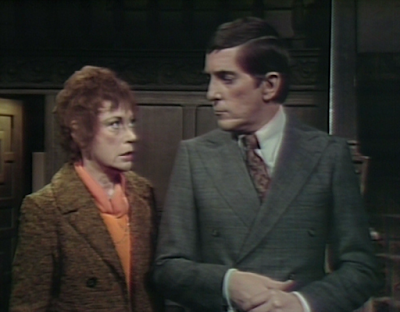 Maggie looks inside the box and says that it's empty. Jeb asks her if she's afraid of him, and she says she's not. Jeb says the box contained the spirit of peace and belief, and she's now one of them. He tells her that Elizabeth, David, Amy and Barnabas are also members, but she must trust none of them. He asks if Barnabas is faithful to their cause. She says that he just said Carolyn must be kept away from him. He asks if she heard of Leviathans, and she says she has not. He tells her to ignore what the book says. He says he's trying to bring Carolyn the same peace she has. She tells him that she doesn't know where Carolyn is. Jeb tells her to find out, but she can't let Barnabas know that she's one of them. Jeb asks about Quentin. Maggie says that he's had an accident, and Jeb says it won't be his last. He tells her that she has to stay in the crypt. He tells her that she'll soon go back to Collinwood, knowing just what to say and do. 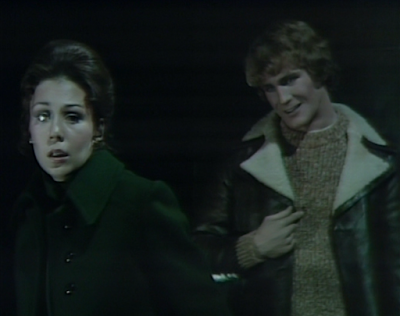 Barnabas tells Julia that Megan and Philip don't know anything about Maggie. Julia finds a note for Barnabas on the ground from Maggie. It says she's gone to Portland to see her aunt, and will be back in a day or so. Julia wonders how they could have missed the note. Barnabas says that they would have seen it by now. He picks up the phone to call the hotel in Portland when Maggie bursts in with a suitcase. She says she can explain. Julia says it doesn't matter, and they;re glad she's back. She goes upstairs to check on David. Julia tells him that he should call the authorities and tell them Maggie is alright. Barnabas tells Julia that he doesn't recognize her overnight bag, and she didn't mention her aunt. Julia says they don't need to worry about Maggie, but they do need to worry about Chris Jennings, because there will be a full moon tonight. 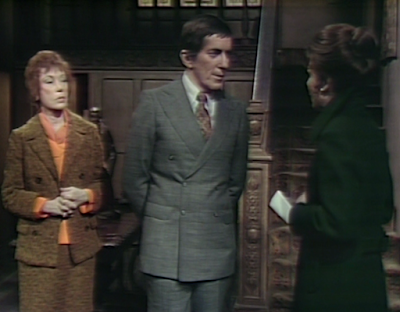 Chris mopes around the cottage, preparing for his struggle with the next full moon. He goes outside and hears someone. He calls out to them, but no one answers. He reaches into the woods and pulls out Sabrina. She has a box with her. He tells her that she knows what's gong to happen tonight, and tells her to go back to her hotel. He blames himself for her white hair. She tells him that she's forgotten about the past, and he must, too. She hands him the box, and tells him to open it. He does. It's a plant. Sabrina says it will bloom as the moon rises, and it may save him. He must eat the flower. He says that's only a legend. She tells him she read a new journal on lycanthropy, and it mentioned this as a cure. She says she wrote the author and he sent her the last known flower. She tells him that if he eats the flower when it blooms, he will never become that thing again. She says he must eat it while the moon is shining, because at dawn the flower will die. 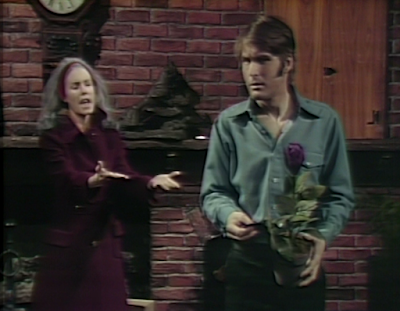 He asks if she'll go if he promises to try. She takes his hand and asks if he remembers all the plans they had. He says he does. She says he doesn't have to live up to those once he's cured, but she says she knows there's still hope inside him. He tells her that he'll do it if she goes. She says that he will come to her after the moon has risen, looking just as he does now. She assures him that it will be over. 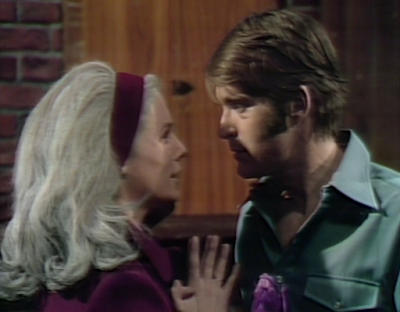 Barnabas tells Chris that Julia had heard about the flower, but hadn't been able to authenticate it. He asks him to return to Windcliff. Chris tells him that he hasn't done anything to help him since returning from the past. Barnabas reminds him that the flower won't bloom until the moon rises, at which point he will have turned, and it will be too late. Barnabas says they can take the flower to Windcliff. Chris says he must stay and do it in the cottage, and Barnabas can't stop him. 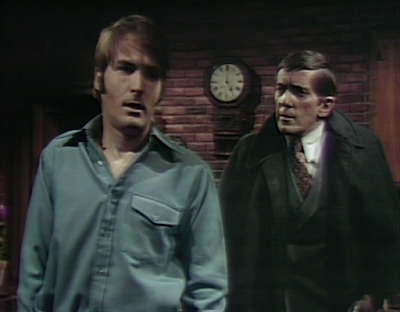 Julia tells Barnabas that Chris won't be able to do it even if the flower would work. Barnabas tells her that Chris is determined. Julia says he can go to the mausoleum. She goes to call him when Maggie comes in asking where he has been. She asks Julia to leave them, and she does. Maggie tells him that she knows why he has been concerned. She says she knows what's going on—at least part of it. She says she didn't go to Portland. Barnabas asks her if it was Jeb, and threatens to kill him. She tells him that Jeb has Sheriff Davenport, and he said that Barnabas was a part of it. Barnabas says that he's not a part of it, and asks her how she got away. She says she opened a box, but nothing happened. She says she pretended that it did, and agreed with everything Jeb said after. She says he must explain things. He tells her they can fight them together. He says that if Jeb thinks she's one of them, then she can help. Julia comes back in and says Chris is intent on staying. Barnabas tells her that they have a new ally. 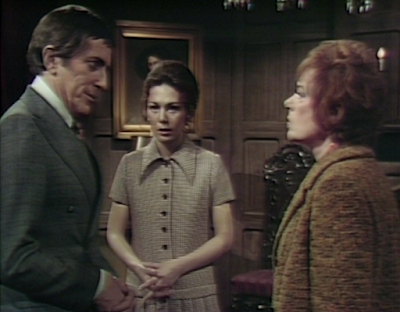 As the moon rises, the poppy begins to bloom. Chris transforms into the werewolf, and reaches towards the flower... 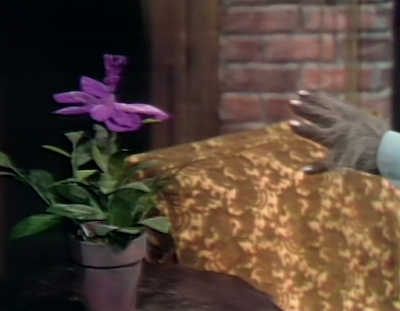 John: I was going to point out that it was impressive that Jeb thought to get Maggie a suitcase, but then Barnabas called out that he had never seen it before. While he's somewhat of a stalker, that information may come in handy.

Christine: Is Maggie really a Leviathan, pretending that the box had no effect when it really did, so that she can get information from Barnabas to bring back to Jeb, or is it possible that the box really had no effect? Does Barnabas know that she got Leviathanned by Jeb and is going along with her ruse that she didn't? It was nice to finally get a glimpse of the spirit of peace and belief inside the Leviathan box. I'm not sure how it instantly makes someone a Leviathan, but the box works in mysterious ways. 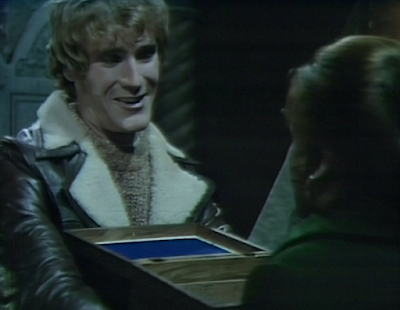 John: I love how when Julia is investigating something, she'll trust no one and leave no stone unturned, and then with something like Maggie, she's quick to believe what appears on the surface and doesn't question any of the strange behavior.

Christine: Little does she know that Maggie is about to usurp her position as Barnabas' number one gal pal, or she'd probably be a lot more suspicious. I'm not sure what to make of the knowing glances Barnabas and Julia were sharing when Maggie came into the drawing room looking for Barnabas. 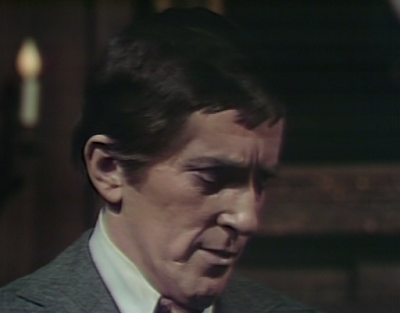 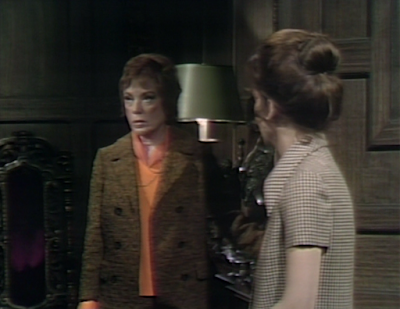 John: Out of the blue, Sabrina shows up on the scene, better than she has ever been before, with a miracle werewolf cure? What dumb luck, when we consider that we only just found out that the only way to stop the Leviathan leader would be with a werewolf. Damn! Do you think they used a werewolf-hand stand-in for his brief appearance at the climax?

Christine: It's not the usual wolf hand, so I suspect Don Briscoe was provided a werewolf glove. Sabrina is quite the pop-in character, as she tends to show up randomly at unexpected places. It seems her therapy at Windcliff is going well since nobody had to slap her back to her senses today. I have a feeling she'll be picking up a box of Miss Clairol soon.