Maggie lies unconscious on a slab in a crypt.

A man comes into the antique shop saying he's looking for something and he was told they might have it. Jeb doesn't look up from his book and tells him to look around for it.The man picks up a kettle and shows it to Jeb, showing off a ring he's wearing. He tells Jeb that he has a feeling he can be useful, and is willing to do anything. 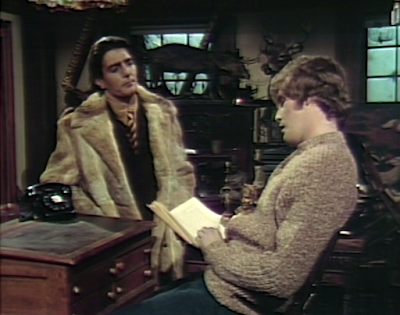 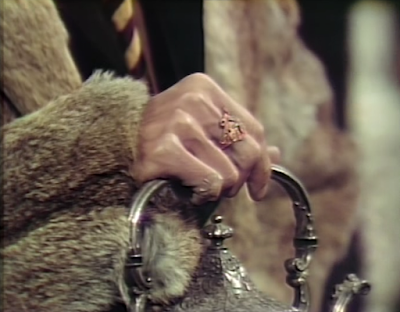 Jeb asks his name, and the man says it's Bruno. He says he knows about Jeb. He asks Jeb if he doesn't trust him despite his ring. Bruno asks him to give him a job, after which he promises Jeb will trust him. Bruno tells him to point someone out and he'll be the end of them. He says he doesn't agree with what the book says about killing. Jeb tells Bruno that he likes him. 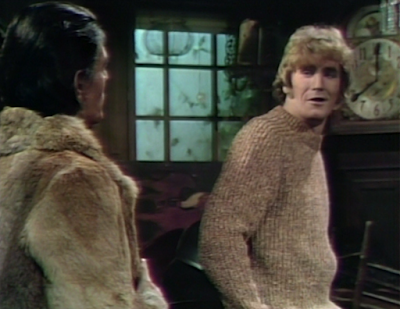 Jeb says that he warned one of their members just the other day. Bruno asks who he thinks is going to betray him. Jeb says Banarbas Collins. Bruno recognizes the name. Bruno says the outlines of the plan are known to all of them. Jeb says he understands why he can't punish Barnabas. Bruno offers to help him get his proof. Jeb says he's also got a girl named Maggie Evans to do that. 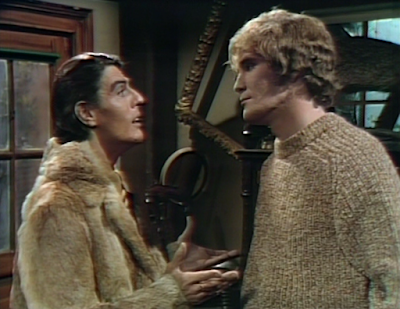 Barnabas checks with the authorities to see if anyone has word on Maggie. They haven't. David tells Barnabas that Jeb had a reason for killing Paul and the Sheriff, and he wouldn't kill Maggie. Barnabas says that when he was Michael, he hated Maggie. David says Jeb only does good things now, and Barnabas corrects him. He explains that Jeb is headstrong. Barnabas tells David that he's worried about Jeb because he is impatient. He says he may have other weaknesses. Barnabas suggests that David read the book again to see if there are any more that they should be aware of. 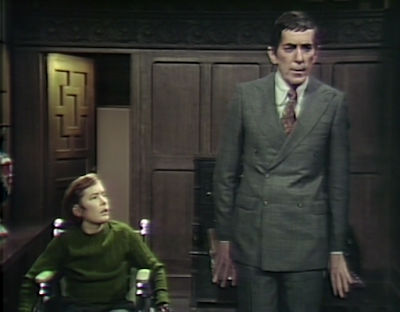 Maggie wakes up in the crypt, unaware of where she is. She recalls being frightened by Jeb in the woods. She tries to get out but the door is locked. The door opens and zombie Sheriff Davenport is outside. He tells her that he understands. He didn't like being in the grave and wanted to get out, too. She asks if Jeb sent him. He tells her not to make any trouble. 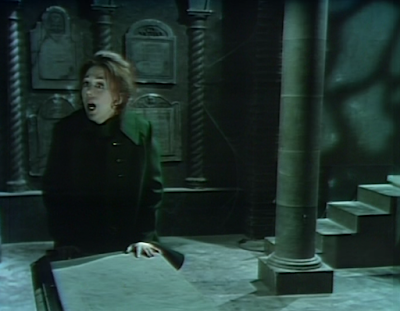 Jeb tells Bruno what he wants from Maggie. Bruno offers to kill her once he has the info. Jeb tells him not to make assumptions. Bruno says that she'll know he's suspicious of Barnabas, and Jeb agrees to have Bruno kill her, provided that it looks like an accident.

David finds something in the book he thinks Jeb needs to be protected against, and goes to tell him about it. 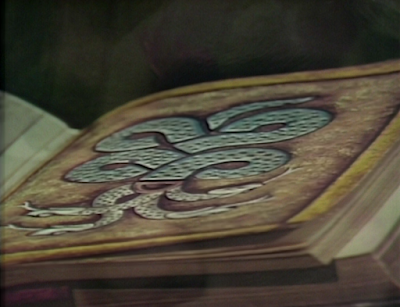 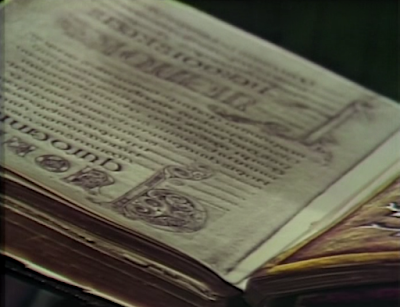 Davenport tells Maggie not to cry. He says his wife used to cry and he didn't like that, either. Bruno comes in and tells Davenport to leave. Maggie says he can't let him walk out like that, as he's not a living man. She then asks Bruno if he's dead, too. He assures her that he's as alive as she is. 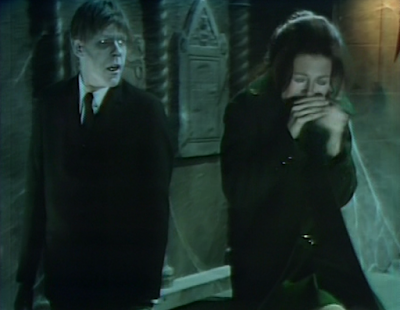 She says he can help her, and he says he intends to as soon as she helps him. She asks if Jeb sent him, and he tells her that she asks too many questions. She tries to escape and Bruno grabs her. He tells her that she doesn't want to die, but she will unless she helps him. He says that all she has to do is talk to him, and he takes out a knife. He says she needs to tell him about Barnabas. He asks her how beautiful she'd be with her throat cut. He asks if Barnabas has told her about any plans that he has to leave the group. She says she doesn't know anything. Bruno says he doesn't like girls who lie, and she says he didn't say anything about a conspiracy. Bruno says he didn't say anything about a conspiracy, and she says that Barnabas didn't, but accidentally mentions Paul. Bruno puts the knife at her throat. She doesn't tell him anything, and he removes it. He says he didn't have a reason to kill her before, but he does now. He calls zombie Davenport back in. Bruno says the same thing that killed him could kill her, and she could come back exactly like him. He tells her it's her last chance to talk. Bruno goes to leave her with Davenport, and says she'll get used to being like him very soon. 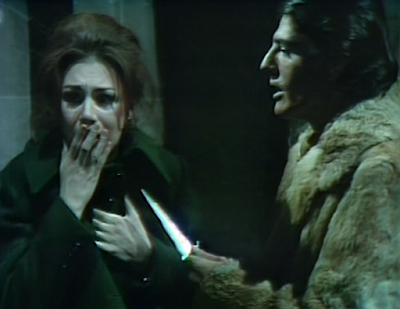 David comes to see Jeb about Maggie. He explains that she's missing, and asks Jeb if he knows where she is. Jeb says he doesn't. David says he also needs to warn him. He says he was talking to Barnabas, and says that Jeb's causing his accident was a weakness. He checked the book for other weaknesses. David found a mention of a wolf who walks like a man described as the only enemy the leader of the Leviathans must fear. Jeb says there can't be a wolf within miles of Collinsport. He thanks David for warning him, and for telling him about Maggie. David says there's a special investigator looking for Maggie. He asks if they're looking for Carolyn, too, and David says she's off with his Aunt Elizabeth. Jeb says as far as he's concerned, she's missing. David asks why Carolyn can't be one of them. Jeb asks him who said that. David says Barnabas told his aunt that it wasn't the time. Jeb says he's worried about Barnabas, and it sounds like David is, too. He says that he didn't go to him with the wolf threat. Jeb tells David to keep an eye on Barnabas. He says his enemy is not a wolf who walks like a man, but Barnabas, and they will destroy him. 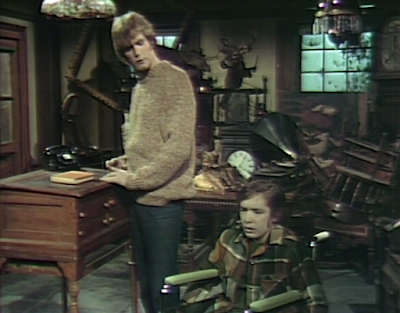 Bruno walks in and Jeb introduces him to David. Bruno asks what happened to his leg, and David says that he broke it falling off his bicycle. Bruno tells him that he should be more careful next time, and shoves his wheelchair out the door. Jeb asks about Maggie. Bruno says she wouldn't talk. He says she wouldn't talk, and that she cares too much about Barnabas. Jeb says he knows how to test Barnabas' loyalty. He says he'll take away Maggie's feelings for him, and leave her with loyalty only to him. Jeb tells Bruno he needs him to go to Portland. 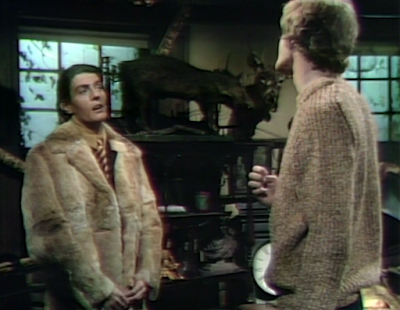 Zombie Davenport silently watches over Maggie. She tries to run past him and he grabs her. Jeb comes in and sends Davenport out to guard the door. 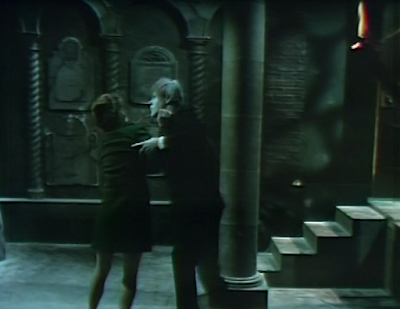 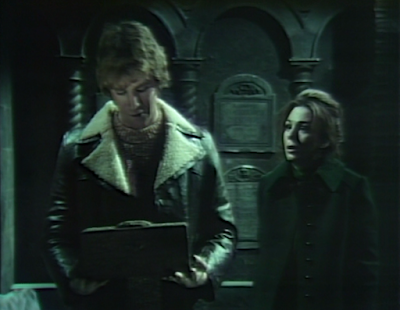 He tells her that she had to be taught a lesson, and it will be finished, after one more more thing. He says she's going to return to Collinwood, different in only one way. He holds out the Leviathan box and tells her to open it. 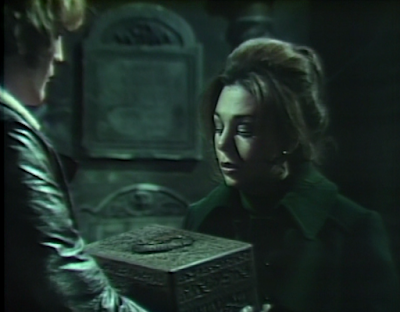 John: Aristede! Sure, call yourself Bruno, but the knife all but gives it away. Funny that he offers to prove himself to Jeb, and yet fails on the one task he was asked to accomplish (which started to lead to some very Aristede-like whining!). I have to give him credit for forcefully pushing David's wheelchair out of the antique store. I just wish we would have gotten a brief yelp from David as the door shut. 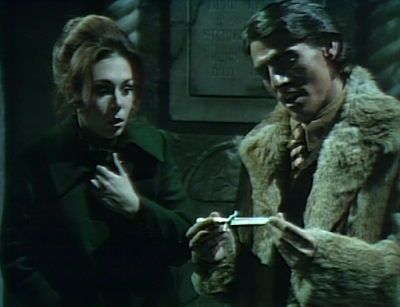 Christine: Well, it's not the Dancing Lady, but it does look like one of the many knives Aristede has wielded before. Just like Aristede, Bruno also has a taste for outlandish fashion. I'd expect him to be a descendant, but I don't think Aristede had the chance to pass on his genes before Blackwood took him out in Episode 881. 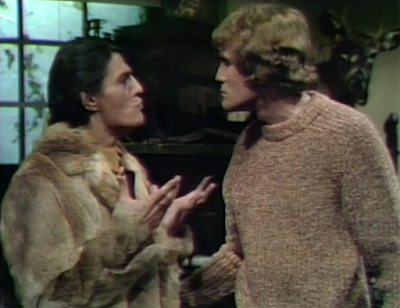 John: It was beginning to look like we were going to get Maggie deja vu all over again, similar to when she was trapped in the labyrinth beneath Collinwood. Fortunately, we didn't have to wait nearly as long for her fate to be revealed. While I do like the inclusion of the walking dead in the show, when zombies start complaining about their former wife's behavior, maybe it's time to sew those lips shut. 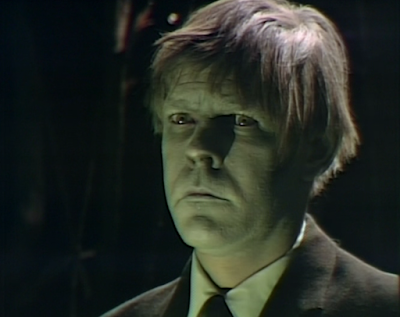 Christine: He sure is a talkative zombie. I was imagining poor Maggie trapped in the mausoleum with him as he talked her ear off, complaining about all the things that bugged him when he was alive. No wonder she begged Jeb not to leave her alone with him.

John: This just in—an appendix to the Leviathan book appears to have been found. The ONLY thing that can stop the leader of the Leviathans is a wolf who walks like a man! Just where (or when) might we find such a thing? Do you think it's possible that the answer might be Collinsport, both now and in the past from which the Leviathans sent their fearless leader? Maybe this was where M. Night Shyamalan got the idea for aliens (whose only weakness is water) attempting to take over a planet whose surface is about 71% water...

Christine: Isn't that convenient? I would expect Chris Jennings, who is currently missing, to turn up at the next full moon to take care of business, except I don't think we can expect Barnabas to take the time to read the full Leviathan text to discover this weakness for himself.

Well, Collinsport has an admittedly small police/sheriff force, probably only one person on duty at a time, so I'm guessing Sheriff Davenport didn't have a lot of people to talk to. And he can't very well to strike up a conversation with Mrs. Davenport, so Maggie Evans it is. Although considering she was friends with a child-ghost and was previously held prisoner by a vampire, not to mention Willie, you would think a somewhat conversational, or at least not-unfriendly zombie, wouldn't be so bad.