As the moon rises, the poppy begins to bloom. The werewolf reaches towards the flower, but can't bring himself to touch it. 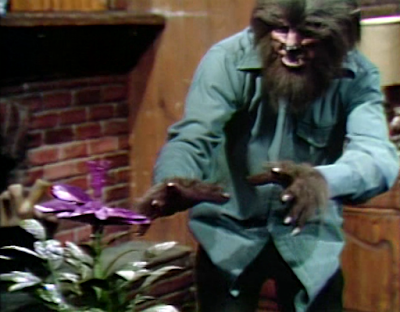 He grabs the flower, brings it towards his mouth, and then tears it up and tosses it to the ground. He runs out of the cottage. 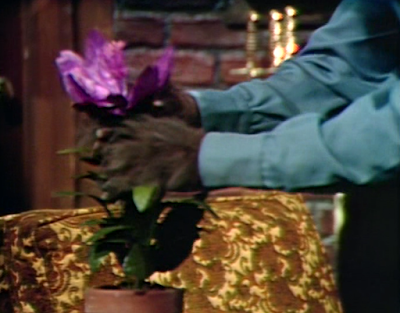 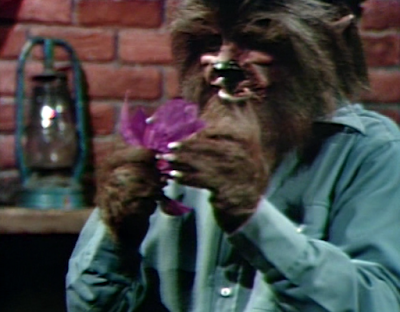 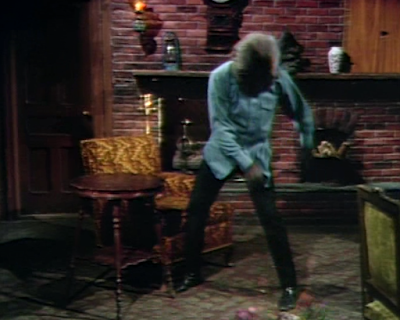 Jeb is on the phone with Maggie, unhappy with her results with Barnabas. He tells her to keep after him until she finds out where Carolyn is. Bruno returns from Portland. Jeb says Maggie didn't find out where Carolyn is. Bruno tells Jeb he's never met a girl that mattered that much. Jeb hears a wolf howling in the distance. He quotes the famous werewolf poem from the Universal classic with Lon Chaney Jr. Bruno asks why he's thinking about that all of a sudden, and Jeb tells him because there's a werewolf. He's clearly frightened. Bruno says he hears a dog, and Jeb, about to cry, tells him a werewolf and calls him stupid. He says it's the only creature they couldn't tame. He says they tried to kill as many as the could, but there was always one left... and it was always howling. 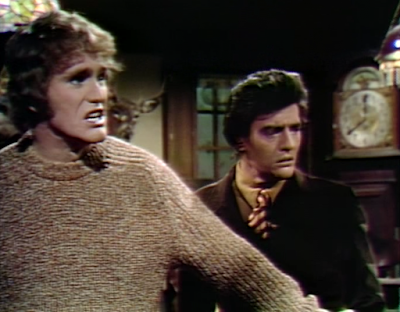 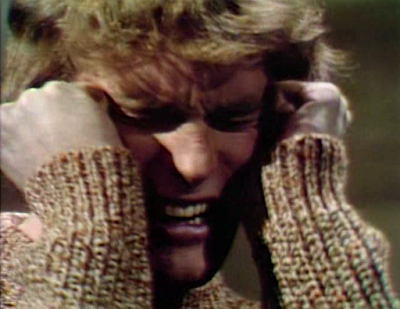 Barnabas finds the flower in the cottage, and realizes that Chris didn't eat the flower before transforming. Sabrina bursts in, seeing the uneaten flower in Barnabas' hands, and screams like a banshee. Barnabas tells her that they met before, and he's trying to help Chris as well. She tells Barnabas that Chris is going to be killed tonight, as surely as the flower is destroyed. She blames herself for bringing the flower. Barnabas tells her that he'll come back alive, but she doesn't believe it. She says she only wants to help. She tells Barnabas that she is the one person that the werewolf won't hurt. Barnabas tells her he's going to bring her home. She says no. He then says in that case he'll give her a brandy. While he pours it, she runs out into the woods. He goes after her, calling her name. 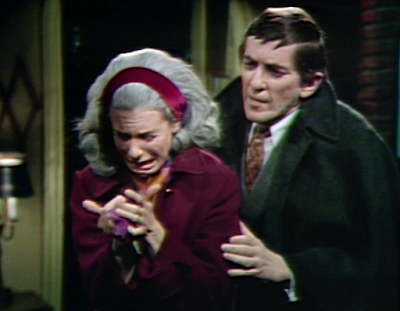 The werewolf lurks in the woods.

Barnabas calls to Sabrina, but can't find her.

Bruno tries to calm Jeb down. He tells him the werewolf is moving away from them, but if it returns, he'll take care of it. He pulls out a gun and says he'll take care of him like he'll take care of all of Jeb's enemies. Jeb calls him a fool, saying the gun won't do him any good, telling him that only silver can kill the werewolf. Bruno says he has to go, if only to prove to him  that he doesn't just talk. He leaves Jeb alone in the antique shop. 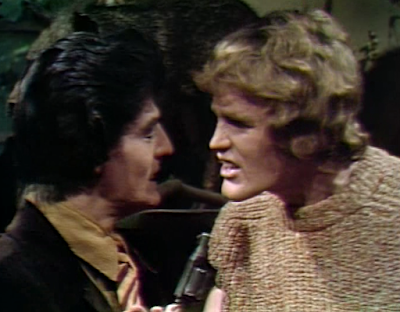 Angelique calls Barnabas and tells him that he must come to her immediately. She refuses to tell him anything over the phone, and encourages him to come as soon as he can. 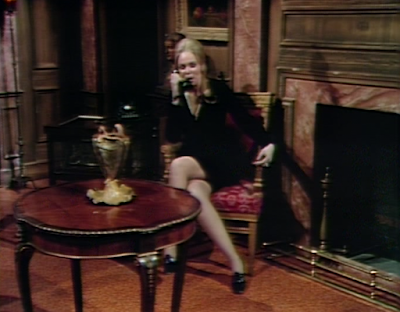 Barnabas wonders if Carolyn is okay, and wonders if there's a way he can figure out something. He leaves Collinwood, leaving the front door open.

Sabrina searches for Chris in the woods while apparently standing still.

Barnabas arrives at the antique shop, and notices Jeb seems shaken. Jeb says it would be a good night if he were with Carolyn. Barnabas says that the time of the Leviathans has been a long time coming. Jeb says he wants her now. Barnabas tells him that it would be better if they didn't quarrel. Barnabas goes to leave, and Jeb says he has a chance to prove they're on the same side. He asks Barnabas about the werewolf. Barnabas denies there's one. Jeb says he has to know. Barnabas says there are stories of an animal. Jeb explains that it's his enemy, and he has to find out where he is, and who he is, so he can kill him before he is killed by him. 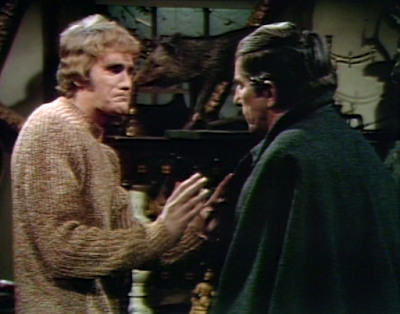 Sabrina searches for the werewolf. He comes out of the woods, and she screams. She apologizes for screaming, and says she's there to help him. He slowly approaches her. Bruno shows up and tosses the werewolf aside. They grapple, and Bruno pulls his gun. He shoots the werewolf, which runs off. Bruno tells Sabrina that he just saved her. She cries and says that he wouldn't have hurt her. 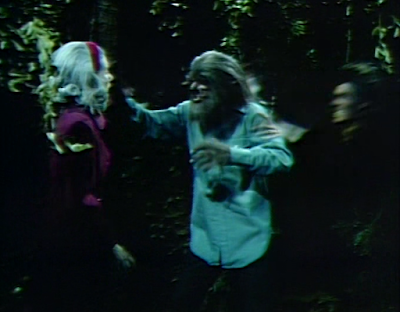 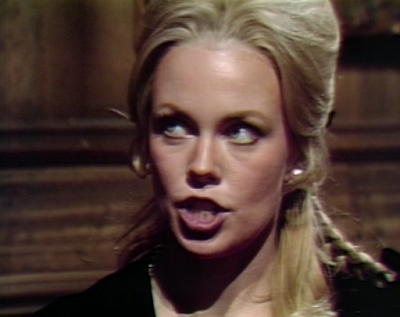 Barnabas is bewildered. Angelique says that Elizabeth told her that she reminded her of someone. She says it's only time until she recognizes her as Cassandra. She says if she slips, she's not just revealing herself to the Collins family, but also to a member of the Leviathans. Barnabas says that Elizabeth will do as he says, and she won't do anything to hurt Carolyn. Angelique tells him that the risk is too great. Barnabas offers to take them away tomorrow. She tries to get him to take them immediately, but agrees to the next day. She threatens him again, if he fails to keep his promise. 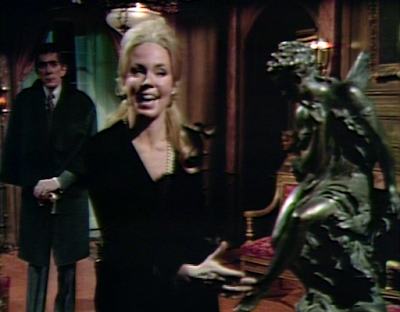 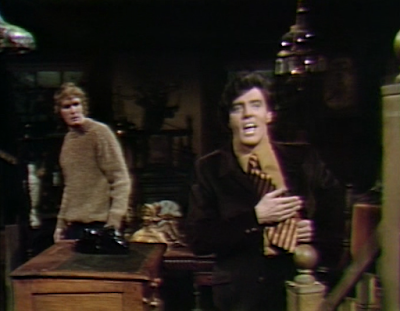 A call comes in for Jeb. Someone has information on Carolyn Stoddard. He finds out where she's at, and says the ceremony will take place on the island. 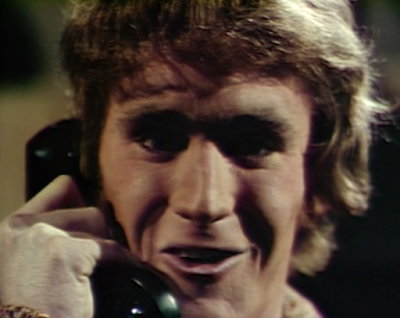 John: Do you think there's a TV in Jeb's room? I assume he must have heard the werewolf 'poem' from watching The Wolf Man with Lon Chaney Jr. Of course it's not like we've seen Jeb, or Michael, or any version of the Leviathan leader reading anything... Shame on Dan Curtis and the Dark Shadows writing team for appropriating screenwriter Curt Siodmak's words and trying to pass them off as a public domain poem! Of course, Jeb makes up other werewolf lore on the fly... like if killed in human form, he'll be an animal forever?

Christine: I don't think there is any shame for Dan Curtis in giving a nod to The Wolf Man, especially when young fans most likely knew exactly where the poem came from. Dark Shadows is a celebration of the Universal Monsters as well as gothic literature. It's part of what makes the show so endearing.

John: Sabrina went from acting catatonic to grossly overacting. Man oh man she dialed it up in this episode. I don't know if I can take much more in the way of her histrionics. And then we've got crybaby Jeb to deal with. I was hoping Bruno might start singing, "Who's afraid of the big bad wolf," just to torment him. 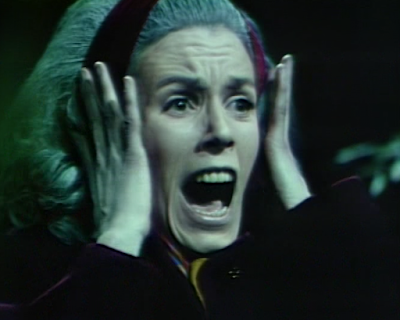 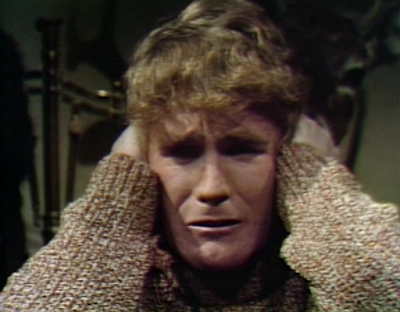 Christine: That would have been awesome! Of course, it really would have been epic if Barnabas had said, "Listen to them. Children of the night. What music they make." I guess I was wrong about Sabrina's therapy going well. Where is Julia when we need her to slap the screaminess out of her?

John: Great shot of Bruno holding the gun looking like it's pointed right up his nose. I guess we really know he's not related to Aristede because he traded in Aristede's Barnabas-bangs for the epic pompadour. 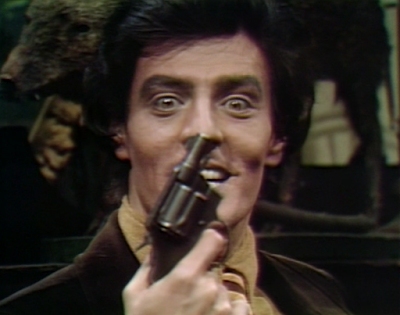 Christine: He must have gotten his hair done while he was in Portland. So, who do you suppose is giving up the goods on Carolyn's whereabouts to Jeb? It wouldn't appear to be Angelique, since she does not want to have anything to do with the Leviathans, and the only other person to know besides Barnabas is her husband. Wouldn't that be interesting if she found out the man of her dreams is a card carrying member of the Leviathan clan? 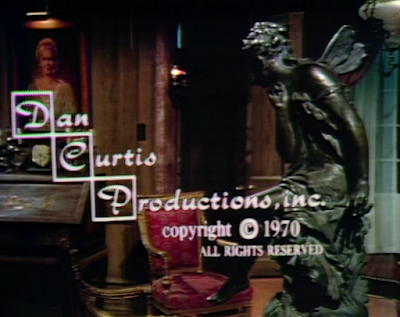